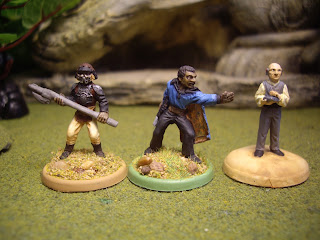 Well, Hello!  What have we here?  Why it's Lando Calrissian!  Former gambler, smuggler and colonial administrator turned revolutionary and Rebel officer!  Also widely acknowledged as the handsomest man in the Galaxy or so he claims, though he doesn't like to boast, you know. 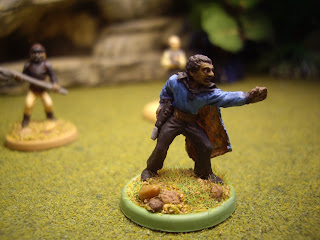 This figure isn't too bad, though it's definitely not one of the best that Julie Guthrie did for the Star Wars line.  Julie didn't quite capture Billie Dee Williams' facial features as well as she did Mark Hamil's or those of some of the other characters.  Still, everybody likes Lando, so painting this little group was fun. 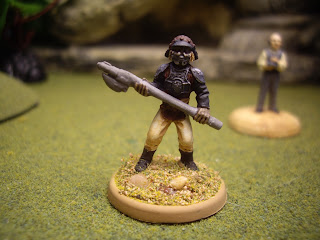 Lando in his Skiff Guard disguise.  I used the action figure below as a painting guide, not realizing the colors differ from those of the the actual costume Billie wore in the film.  You can see the difference in the movie still below.  Looks really good though, I think. 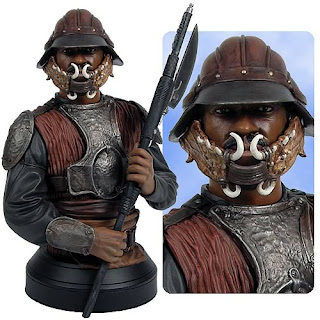 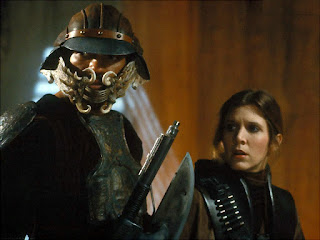 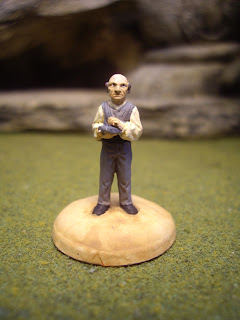 Lando's right hand man, the android Lobot.  Lobot's brain is hooked up to Bespin's central computer so Lobot can run most of the city's functions right out of his own melon.  Wish I could mow the lawn like that.  Nice figure.  So well sculpted it makes me look like I know what I'm doing painting it.  Since Lobot was pretty much a permanent fixture of Cloud City, I gave him a different base from the others. 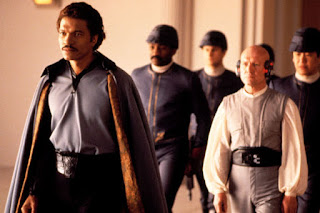 The lining of Lando's cloak is interesting.  Lots of tiny green and orange Chinese Dragons.  They just look like little flecks from far away, though. 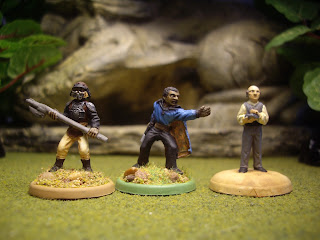 Small but fun addition to my Star Wars collection.  What I really need to do is step screwing around and get back to finishing my Rebel Fleet and Imperial Army Platoons so I can get a game going!
Posted by Mouse at 2:26 PM 4 comments: 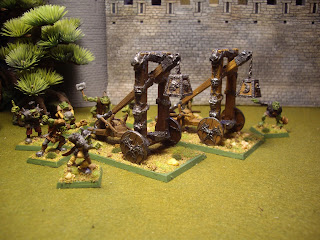 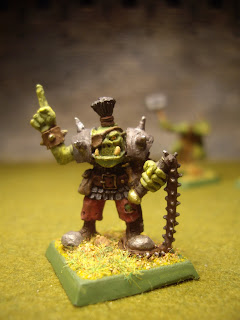 "Well, Boss, I sez, yoo come to da right place!  We'll getchoo some reel good masheens, don't yoo wurry!  Course, we can't make da big wonz like as he wont's, we only know hows ta make da little wonz like 'ol Yummskabb got. But I don't let Big Blackie know dat, nar!  I got resour...re...rezorz...I got stuff nobody else knows about helps me git stuff done!  See few yeers back we caught us some Chaos Stunties!  Yeah!  S' true!  But don't tell nurbuddy, kay?  S' a seecrit!  Anyway, we caught dem Chaos dorfs an we got 'em in a hole we don't tell nobuddy about!  They got nuffin ta eat down dere but worms and stuff, so we tell em if dey help us build stuff, we give em a whole bunch a grub!  Works out nice.  Here's what I mean, see?" 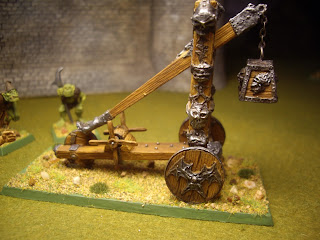 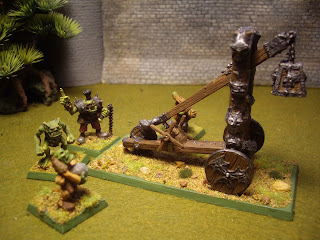 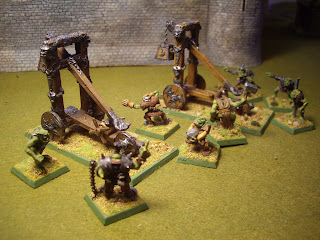 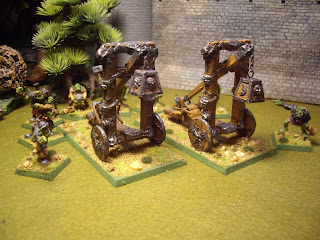 So there is this month's addition to Big Blackie's Ork and Goblin horde.  Still have many, many Greenskins to paint between now and the end of Orktober but we'll get there!  Have an Orcy weekend!
Posted by Mouse at 9:05 PM 6 comments: 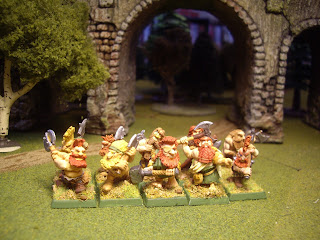 "The tale tells that one night while Snorri Skytoucher, famed scout of the Muster of the Upper Hall lay snoring in a drunken stupor, a sudden storm broke upon the slopes of the Thunder Mount.  Skytoucher's wife, Gudrinn, unable to wake her husband, wrapped herself in a bearskin and went out into the squall in an attempt to gather the family's sheep ere they were all scattered before the storm and lost.  In the gloom of darkening evening and onrushing storm, the Dwarf-wife thought she could see the sheep gathered together, a patch of white far down the slopes in the gathering gloom.  She made her way toward the white patch, straining her eyes through the dark, and thought she could see it move, but the closer she drew to it, the further it seemed to move away, until she was quite far down the Mountain's side and very much alone in the dark.  Still, she pressed on, deeper into the storm, until suddenly she found herself amidst a troop of Goblins who had come up the mountain to raid but had themselves been caught by the abrupt onset of the wind and snow......a few gentler versions of the tale say that Gudrinn's end was swift, but most agree that it was painful and lingering.'" 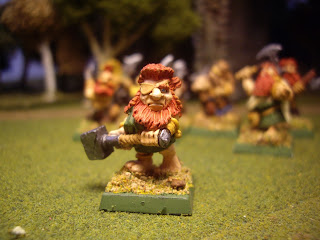 "...When Snorri awoke and found his Gudrinn missing, he went out in great haste to find her.  The storm had quieted when he left the Upper Hall and emerged on the mountainside, and it did not take him long to find the sad remains of his beloved wife in a small copse a little less than a mile down the slopes of the great mountain...." 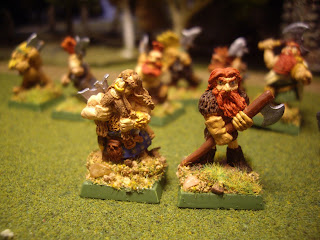 "...the pain of his loss was unbearable, but it was his guilt that twisted his sorrow and anger into something wild and wrathful beyond the ken of ordinary Dwarves or Men.  Snorri vanished into the woods and mountains of the Black River country, living on roots and berries and what meat he could catch with his hands and teeth alone.  Tortured and driven by his pain and shame, he shunned the company of his own kind, keeping to the wildest and loneliest country he could find..." 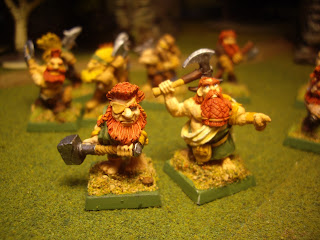 "...In the years that followed a legend grew up around Snorri's name.  Young Dwarves spoke his name in awe.  Goblins spoke his name with direst dread.  Tales told of a ghost-dwarf that crept into the Goblins' very camps and throttled them in their sleep.  A ghost that drank Goblin Blood and ate Goblin livers and their tounges...." 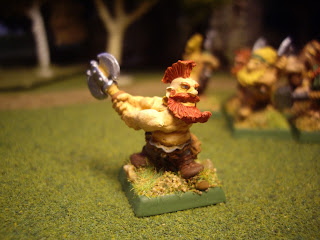 "...In time, the legend of Snorri Skytoucher would drive a small band of Dwarf heroes, each driven by his own demons, to seek out the company of the Ghost-Dwarf, and to join him in his unending hunt for all the enemies of the Thunder Mountain folk.  The legend of Snorri was swollen with wild tales of death seeking and defying deeds.  Around roaring fires in the high-vaulted halls of the Thunder Mount, Dwarves would spend all winter telling the story of how Snorri took the magic hammer of the Orc Lord Ungolt Iron Teeth, having crushed the windpipe of that infamous personage under his bare heel, or of how mighty Snorri  opened the skull of the Goblin Chief Wuggo Grub-Gut with his very teeth, thus earning the sobriquet "Head-Biter." 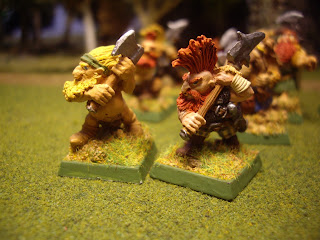 "...The decades roll by.  The sides of the Thunder Mount are dressed now in winter snows, now in summer grass, and still the legend of Snorri Headbiter lives on, as he and his grim band patrol the lands west of the great river, seeking the final extermination of their peoples' enemies...or the long peace of death..."