A little bit of nerdy tomfoolery for you this holiday season.  Only very questionably in the spirit of a holiday dedicated to peace and goodwill, but this IS primarily a wargaming blog, isn't it?  And anyhow, it's damn funny.  Merry Christmas and see you in the new year!
Posted by Mouse at 11:34 AM 1 comment: 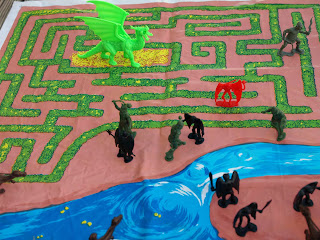 This is what happens when an old, sad bastard sits around the house all day and night with two broken arms and some booze.  He drifts back to those "sunny slopes of long ago."  Yeah.  The other day Springinsfeld posted an interesting bit about old 80's plastic toys that  bear a suspicious resemblance to a lot of the classic AD&D minis we know and love and that sort of put a bug in my head.  Today I spent a good amount of time researching some D&D-esque toys I loved in my boyhood, and here I share what I've re-discovered.

Before we go any further, let me say that none of these photos are mine, most of them are taken from two very cool web pages:  Little Weirdos, and Virtual Toy Chest.  They are worth checking out, if you like this kind of thing.

In the very late 70's and very early 80's an obscure toy company called Dimensions for Children made some some very lovely toy playsets.  They had an American frontier set called Fort Courage, and a Battle of Anzio set, but what they really put their hearts and money into was developing a series of kids' playsets with a sword and sorcery theme, done in the good old Marx Toys style.  They succeeded admirably, if you ask me.  Clearly DFC was inspired by the burgeoning Dungeons and Dragons movement, but their toys realized a unique and delightful vision of the Sword and Sorcery genre, and I still remember with electric clarity opening my Dragonriders of the Styx set on Christmas morning.

There were 5 DFC Fantasy playsets that I know of.  If anyone knows of one I've missed, please let me know.  I'd still like to collect the whole bunch.  Someday. 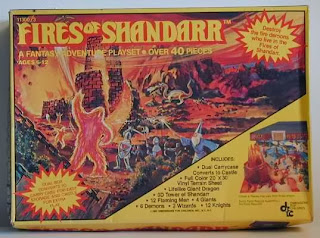 #1:  The Fires of Shandarr:  My buddy Pete got this one from Kmart when we were in 4th grade.  This was the first I'd heard of DFC, and damn was I jealous of this new country which Pete had discovered.  I was still excited about the pack of Andrew Chernak Grenadier Goblins I'd gotten for my birthday, but here Pete had a damn D&D wargame in a box!  It's amazing the memories that stick with you.  I vividly recall a weekend at Pete's house spent watching his video dub of Excalibur on an interminable loop and wargaming the Shandarr campaign endlessly around his room; bloody last stands around the forest of the legs of Pete's desk, stirring final assaults on the bureau plateau!  And the whole concept is so great for a kids' game!  The fires of Shandarr: What a title!  And look at all the stuff you got: 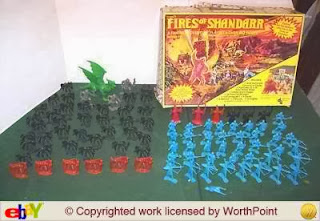 Devils, Demons, a dragon and..."lava monsters" that bear an uncanny resemblance to the Monster Manual illustration for the Shambling Mound... 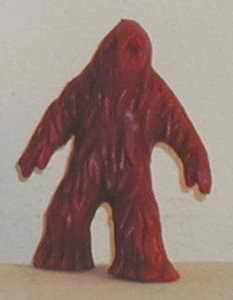 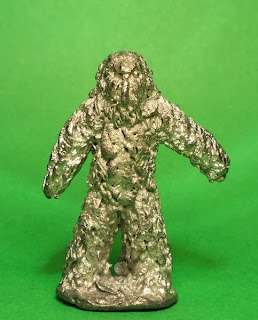 ...here is the Grenadier official Shambling Mound...the resemblance is not as obvious here as it is in the Monster Manual Illustration... 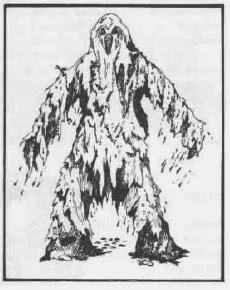 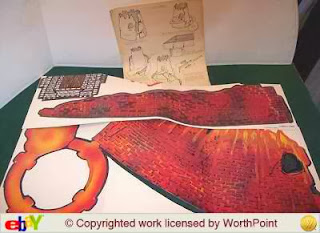 The terrain cardboard punch-outs for the Shandarr Volcano and Castle gate...wouldn't look out of place on an Oldhammer table!

Pete, in his fighting reconnaissance of Kmart, had claimed that he'd gotten the last of the Fires of Shandarr sets, but that there was still a set there called "Forest of Doom" that featured evil trees instead of lava monsters.  Naturally this led to my eagerly and unceasingly inquiring of my mother when it would be necessary for us to go to Kmart again. Alas, it was a long time before it was deemed necessary, and when I did at last venture into the Kmart toy aisle, there were no DFC playsets of any sort in evidence! Verdamnt!!  Foiled!!  Months passed, and I began to grow cynical. I began to think that Pete had made the whole damned thing up, and that there had never been a thing so wonderful and mysterious as a "Forest of Doom" playset.  Many years would pass before the internet provided the evidence necessary to at last vindicate poor Pete.