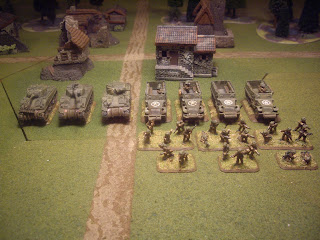 Just finished up the latest addition to my FOW British armored squadron:  the company's fourth and final Sherman tank platoon and a motor platoon. 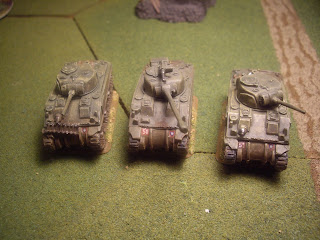 The Shermans are pretty much the same as the other platoons...2 mark Vs and a Firefly... 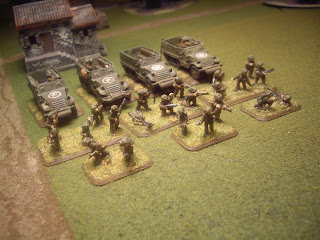 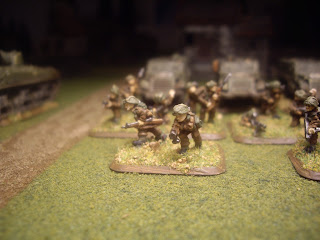 The motor platoon is small but well armed, with command stand, PIAT, light mortar and 3 machine gun teams, not a lot of staying power, but enough firepower for smaller jobs... 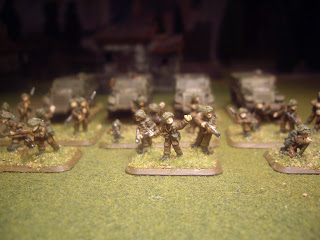 And they look cool riding in amongst the tanks, which is important too. 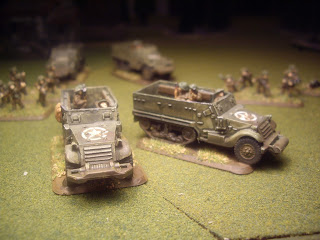 The platoon's transport are four American Harvester M5 half-tracks.  No machine guns, unfortunately.  Pretty much anything looks better with a machine gun on it, but the British seem to have preferred to use theirs for other purposes. 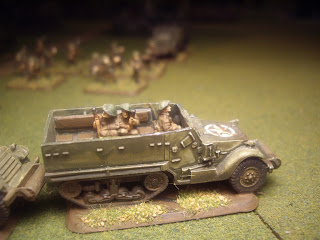 I love half tracks!  German, American, even French...they all look great! 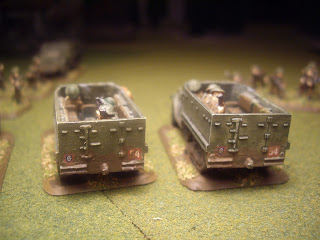 Some time back I bought some Bolt Action German h-tracks, intending to convert them to transport for a Rogue Trader Imperial Guard force.  Haven't gotten around to getting started on them, though...so  many projects, so little time. 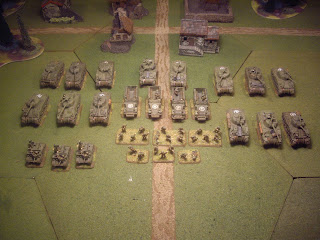 The Squadron so far...1200 points!  The next 300 points will be a lorried rifle platoon and a heavy mortar platoon.  After that, I just need to add 4 command Shermans, 1 for each platoon, and a fighter bomber.  That will push the force out to 2,000 points, which is as far as I'm going with my FOW armies. 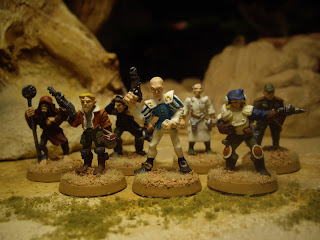 Somewhere in the Wailing Reach, seven brave spacefarers disembark from their ship, ready for anything...This was a project I'd been wanting to get started on for a long time.  I wanted a crew of seven, same size as the crew of the Nostromo in Alien.  For a long, long time the missing link was the navigator, as I was never able to find him for sale for less than about 30 bucks.  Then about two weeks ago he appeared as a buy it now for 10 and I snatched him up.  The same day he arrived in the mail, I started painting up my ship's crew. 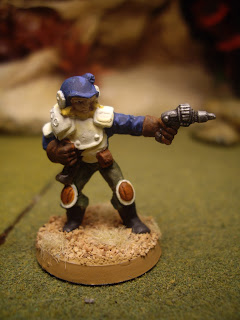 Here's the Captain.  The blonde hair and beard make me think of Zaphod Beeblebrox. 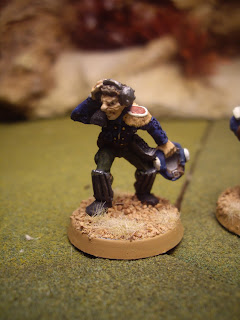 And the first officer... 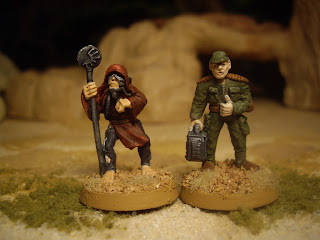 Tech Priest and Engineer.  The Engineer is the only non GW figure in the bunch.  No idea who manufactured him.  I like him, though. 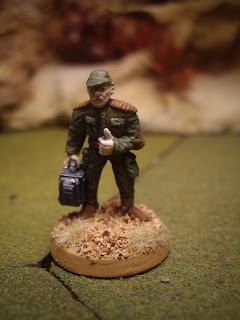 He came in a lot with two other space ship crew figures, but unfortunately these were of such poor quality that they were unusable and I threw 'em in the junk heap.  Weird lack of facial details! 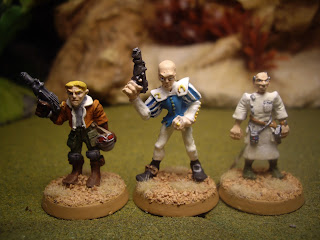 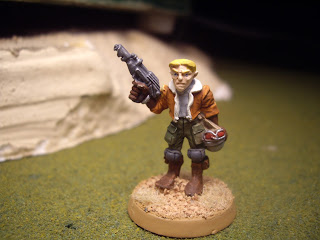 The gunner ready for action.  Possibly my favorite mini of the group... 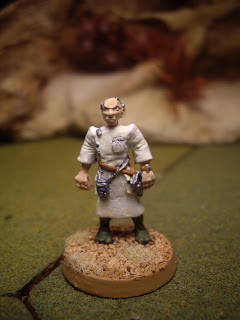 ...though it's hard to choose beween him and this fellow!

Stuff to listen to While Painting: The Sisters Of Mercy - Wake Live 1985 Full Concert Remastered [16:9-Edit]


For those of us old enough to remember, here's an echo of that far off olden tyme we call the 1980s.  Listening to this as I paint some Rogue Trader stuff and getting some good inspiration out of it so I thought I'd pass it on.  Please enjoy...
Posted by Mouse at 12:25 AM No comments: