At last!  The day of battle was upon us! 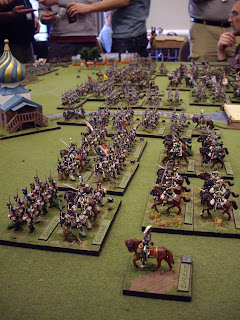 View From the French left.  Looks impressive, but in fact, nobody on this side of the battlefield did much of anything for the entire battle...

Cheers to Doug Hamm, who put on a great game, and to everybody who contributed as players, mentors and painters.  See you next year!
Posted by Mouse at 11:14 PM 9 comments: 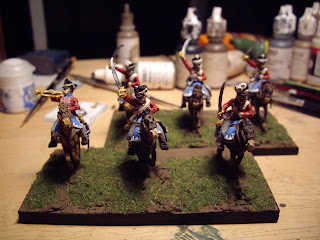 The last unit of my Russian Cavalry Corps are these Hussars.  They don't look like much, but I am all out of time to work on them, and so unfortunately this is as good as they are ever going to get. 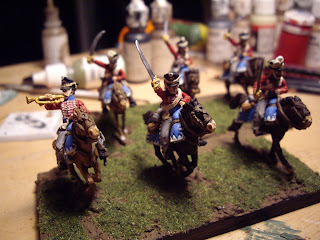 I've painted both stands as being of the Izoum regiment.... 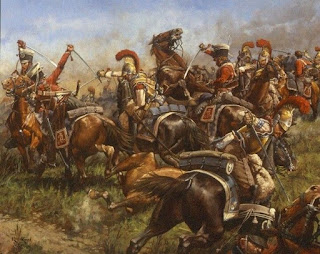 ...shown here painted by Keith Rocco in the big mix-up with French Cuirassiers at Borodino. 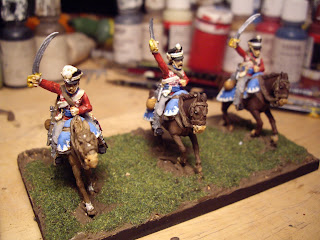 Like the Dragoons, these are Perry minis, and they're not bad, but there's something about them that made my paintbrushes surly, unhappy and bad at their job.  I'm no happier with these than I was with my Dragoons, but try, try again, right? 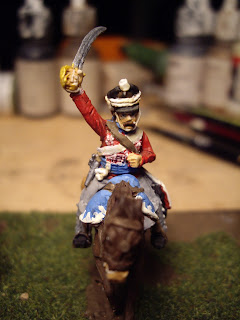 The braid on their chests refused to allow itself to be dry brushed, for some reason.  Not sure why. 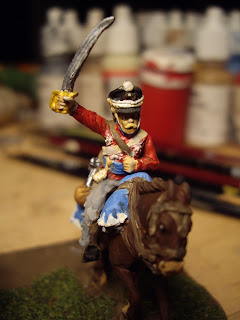 I brooded over letting them have their pelisses in spite of the fact that they did not wear them on the day of the battle.  I have the pelisses painted up, however, and will take them with me to the con in case I change my mind.  Pelisses just look so damn good! 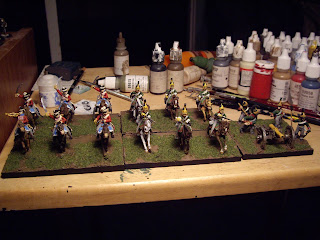 My finished corps.  Had to re-base the gun as it turns out I had it on the wrong size base.  Grr.  Well, they're not pretty, but you don't have to be pretty to be able to fight, right?  We'll see how they do at Borodino.  I'll post some pictures of them in action at Enfilade sometime in early June. 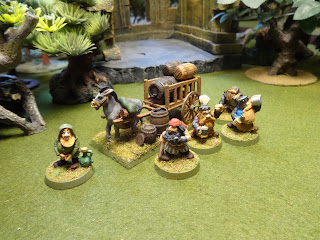 An ancient and sacred tradition in the Thunder Mountain colony dictates that when the King's army marches to war, it does so fortified by a number of casks of excellent beer and cider furnished at he King's own expense. 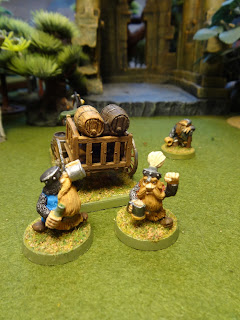 Although appreciated by all, for some Dwarves the 'King's ration' is simply not enough.  Those who need a little something extra while working themselves up for, or winding down from, battle can turn to some of the private ale-selling enterprises that invariably follow in the army's trail. 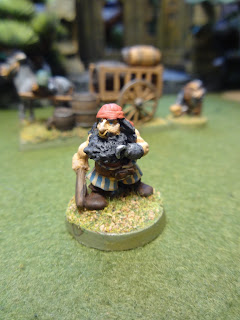 Shown here is one of the more celebrated of these entrepreneurs, Pieter Larsen, known to the soldiery simply as "Ol' Piet."  Like the army's other farriers, Piet fought in the ranks in his youth, earning many hair-raising scars and blood curdling war stories which he's glad to share around the ale barrel in the evening.  Like so many old war vets, Piet is well known for being a bit crotchety and  short of temper.  His club and hook hand serve as an excellent deterrent to those Dwarves who have a hard time knowing when to stop tapping the kegs. 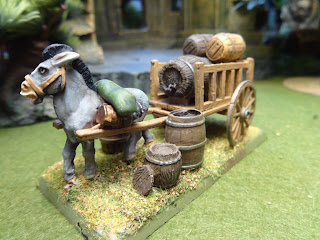 Here is Piet's beloved friend and co-worker, Polly, well known for being just as cranky and violent as Piet himself.  Her hind legs have developed enormous strength over the years of hauling her heavy loads and a sharp kick from her aft hooves have been known to knock obnoxious customers out cold. 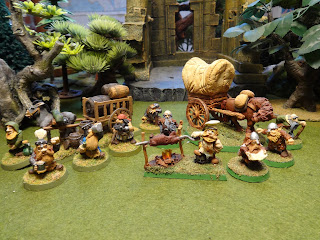 The complete baggage train.  The pictures look a bit washed out because I used my wife's camera and I haven't really figured it out yet.  Well this was the very last piece of my 3,000+ point Point Oldhammer Dwarf army.  It has taken years and I still want to add another 2k points or so, but the muster of  Thunder Mount is finally 100% ready to march!