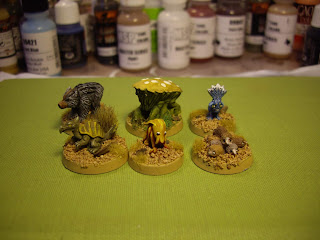 I'm preparing a crowd of civilian NPC types who can wander around Skummburg and add some color to the place, but I thought I'd like to have some of the local wildlife too.  These critters were all giveaways with the latest Colony 87 kickstarter. 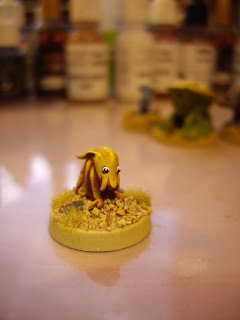 Slush Puppy.  Native to mud holes and landfills through out the Wailing Reach.  When cleaned up and raised from pups they make loyal and intelligent pets. 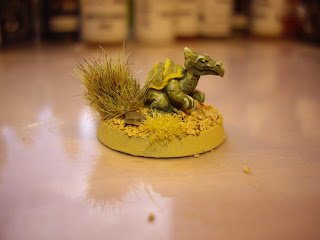 The Scrub Dragon is native to the vast deserts of Fargo but has spread throughout the Geminions and is now especially well established on Geminon Secundus. 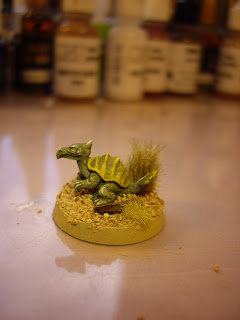 Not dangerous to humans if left unmolested but packs a venomous bite in defense.  It's meat is considered especially good eating by some inhabitants of Fargo and Geminion Secundus. 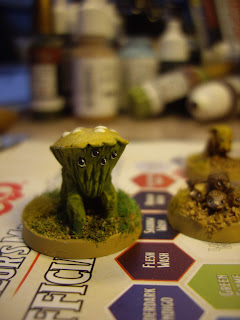 The Fungus Humungous is known to grow to tremendous size in the dank climate of its home world of Proteus.  In arid climates it tends to remain limited to the more modest size shown here, its growth rate being dependent upon the availability of moisture.  It is an active creature, and wanders far on errands whose nature is known only to itself.  Though harmless, larger specimens are known to startle people by warndering by their homes and peering through their windows at night. 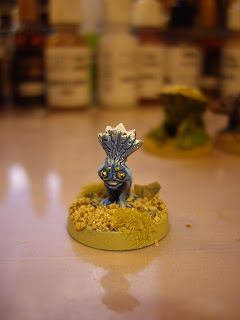 The Rannian Plumed Cat is an amphibian creature native to the Oceanic world of Ran.  It is highly intelligent, curious and mischievous with astonishing powers of mimicry.  Specimens have been known to follow combat units around battlefields, imitating the voices of leaders and giving false commands to their troops. 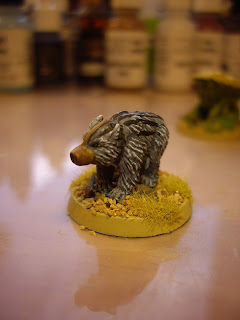 In the wild, the ferocious Fargoian Bearger is a menace, often emerging from its deep burrows to attack passersby.  When raised from cubs, however, the make loyal and intimidating guard beasts. 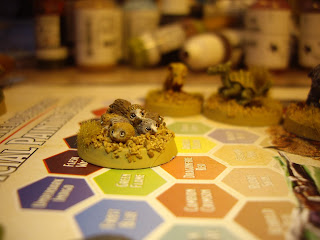 The hedge hog-like Wubb is known for its intelligence, inquisitiveness and staggering birth rate.  Left untended populations can swiftly get out of control.  They are popular pets with children throughout the Wailing Reach. 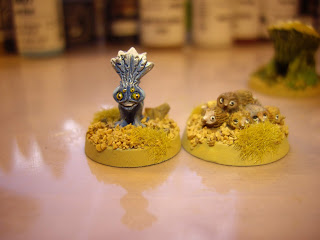 More denizens of Skummburg on the way!
Posted by Mouse at 12:43 PM 8 comments:

Z is for Zombie!! 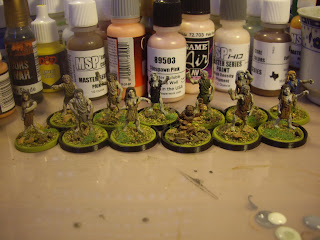 For a long, long time there was no painting.  Oregon.  Texas.  Germany.  The Balkans.  All was sleeping on cots and living out of ruck sucks and duffel bags.  Bare minimums.  No legions of little metal friends.  No fleets of resin tanks nor paint daubed hands and glued-together fingertips.  No hobby time. 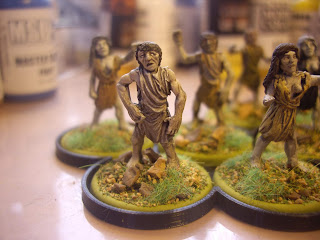 Somewhere in there came the co-vid or something near enough to it as made no difference.  I felt lousy for about five days. We all did.   I din't die.  Come to think of it, hardly any of us did.  We are in a little place high in the mountains.  I miss little Mouse and Mrs. Mouse.  All is rifles and helicopters and uniforms but it's not like the old days.  Not like the wars.  Nobody to throw bullets and mortar rounds at us.  Safe.  But dull.  I like the mountains.  I like the local people, as far as I've gotten to know them.  I love my boys.  But it is strange. 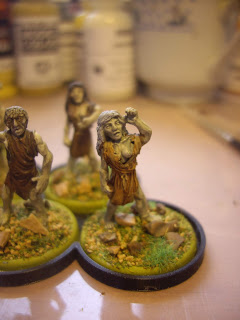 Packages began to arrive.  The co-vid silliness kept them held up for a long time but at last things began to trickle in.  Boxes of paints and brushes.  Tiny tubs of flock and fine gravel.  Plastic cases I'd filled months ago with based and primed minis and sealed and had shipped to me by friends and family.  I pulled them out of their foam beds and began to slap paint on them!  Huzzah! 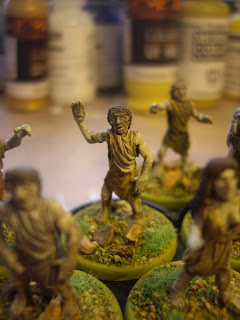 Zombies!  I loved the Living Dead movies when I was a youngster and love them still today.  For years I'd been tempted to build a zombies-overrunning-civilization game but then the vogue for all things zombie hit and the glitter wore off the idea.  I've lost all interest in that but I still wanted to paint up some of these classic Ral Partha Zombies for D&D type games.  I plan to incorporate them into a Dragon Rampant army as a 'ravenous horde' unit as well. 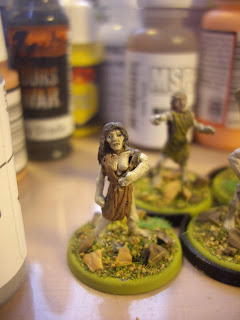 These are very ancient 'true 25s'...much too small to fit in with other manufacturers but I love them.  They all come from the old "Zombie Master" set, although I bent some limbs here and there to add some variety. 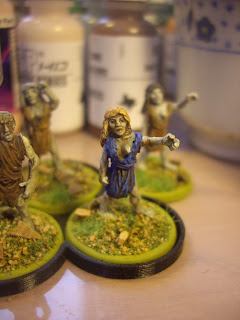 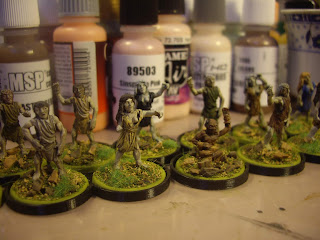 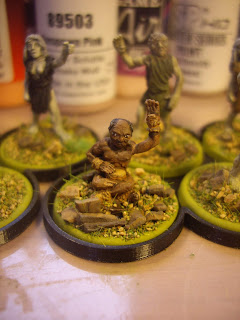 Here is the Zombie Master himself.  Sinister Voodoo Cult leader type.  Sort of fellow you'd like to  sit  under a weeping willow and sip brain soup with.  Mmm... 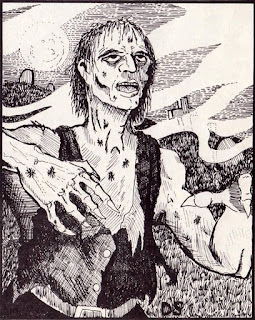 I'm planning on adding a lot more old school 'true 25s' to my collection while I'm here. Mostly D&D adventurers and various monsters for them to fight but also the first of a great many old Tom Meier Colonials! 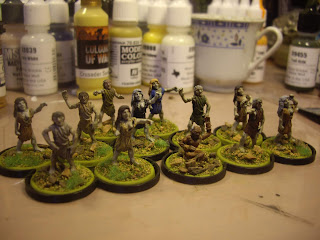 Remember this classic?  Think I'll go watch it before bed...
Posted by Mouse at 4:24 PM 8 comments: