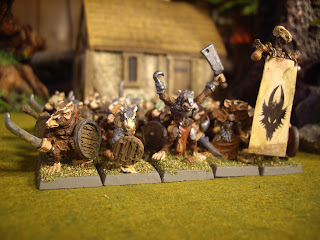 In the inky blackness beneath the Flea Fell teeming hordes of Skaven slaves toil on interminably, mining, delving, gnawing at the roots of the world.  When war comes, companies of the toughest and most hateful, vicious slaves are dragged up out of the darkness and herded into battle where the luckiest amoung them will die a quick death under the blades of the Skavens' enemies. 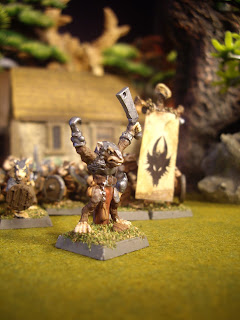 The pit bosses who manage the slaves in their miserable labors are also the commanders who drive them into battle.  Bosses like Pit Master Frikkit here enjoy some considerable status in Skaven society, for among the indolent and neglectful Skaven race little is accomplished without slave labor. 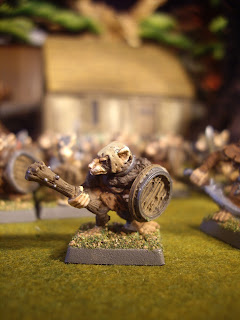 I started a Skaven army a good long time ago, but after I'd painted a few units I became discouraged because I couldn't get that marvelous, disgusting, makes-you-itch-to-look-at-'em look that Andy Chambers' Skaven had.  Despite my efforts my own Skaven looked sort of natty and...cute!  Horrible. Very disappointing. 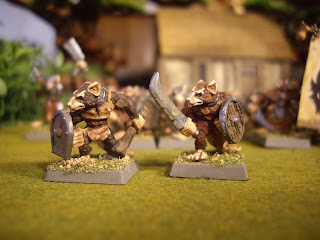 Recently I was inspired by Matt Sullivan's engrossingly repulsive Vengeance of the Lichemaster Skaven  to get out my own rat boys and start building on the army again.  Matt's ratmen were so delightfully, inspirationally disgusting!  Surely, I thought, I'll get it right this time. 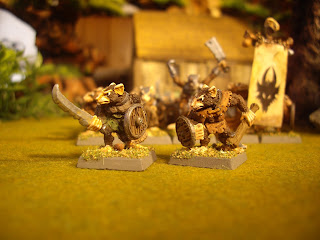 Well, as you can see, my technique turns out to have changed not at all and still yields 'cute', Disneyish looking Skaven instead of creepy, dirty looking Skaven.  I'm resigned to it.  This is just what the army is going to look like I guess.  Next up are some Jezzail teams and more Clan Moulder stuff.  Hopefully I'll find a way to make them look more nasty and repugnant but I'm not counting on it. 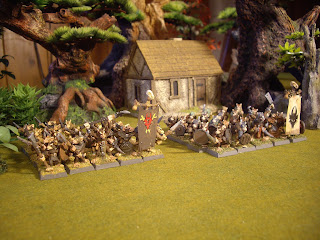 The army's two Skaven slave regiments advancing into action together.
Posted by Mouse at 6:56 PM 9 comments: 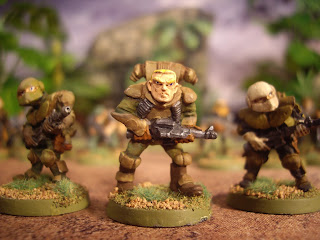 General Arnault Blackridge began his career as an enlisted soldier in the 227th Tank Regiment of the Planetary Defense Forces of Geminion Secundus.  Hailing from the cold and rugged Blackridge region of the Thoric Alps, from which he took his name, Arnault soon impressed both his peers and superiors with his imposing physical presence, his natural leadership ability, and a rapidly acquired tactical and technical proficiency which was second to none.
Having quickly exhausted the opportunities for advancement available in the Geminions PDF, where higher leadership positions were by this time open only to members of the aristocracy, Arnault applied for transfer to the 13th Geminons Imperial Guard regiment and was accepted.

In the world of the Imperial Guard, Arnault Blackridge found a place in which he could thrive.  His awesome physique, tactical acumen and easy confidence soon won him the respect of his officers and comrades, while his affability, concern for his men, and thick Thoric accent earned him the affectionate nickname of 'Dutch'. In battles against Ork, Eldar and human enemies alike, Dutch proved himself an unbeatable opponent.

Still in his twenties, Dutch, who routinely volunteered for the sort of exceedingly dangerous and difficult long range reconnaissance and deep strike missions which other Guard officers preferred to avoid, was promoted to Major and assumed command of the Geminions Imperial Guard Corps' Long Range Reconnaissance Group.  Under Dutch's command the Corps LRRG came to be known as 'The Blackridge Boys' a name which inspired fear and respect throughout the Wailing Reach and even beyond.
Within a short time, however, Arnault's carreer took a down turn.  Three years after assuming his new command, Dutch was invited to attend the training school of the Dead Men Space Marines chapter, and did the unthinkable.  He declined the offer.  Though he loved military life, Dutch also loved women, and the monastic life of a Marine simply held no appeal for him.
The rebuff was a grave insult to the Dead Men Space Marines and an embarrassment to Blackridge's own leaders.  Within a few months, The Blackridge Boys had been dissolved and Dutch, despite all his past successes, despite all his innumerable accolades, found himself relegated to an obscure administrative position far from the action and any opportunities for advancement.  Thoroughly disheartened, he resigned his commission, turning his back on his career and his pension.
For the next couple of years Arnault tried to make ends meet as a bodyguard to minor members of the Voldradi, the Geminion aristocracy, but the work turned his stomach.  Things might have remained in this miserable pass indefinitely, but fate had other plans for Dutch Blackridge.
In the year of Our Emperor 39717, a tsunami of Genestealer cult activity heralded the arrival of Hive Fleet Terrasque, and the conflict which came to be known in the Wailing Reach as the Second, or Great 'Stealer War began.  Total war was the order of the day, and all the resources of The Reach and the surrounding sectors were massed to quell the Genestealer uprising and beat back the threat of the approaching hive fleet.  Dutch approached the Geminions Guard Corps in an attempt to get his old job back but was rebuffed, and in fact only narrowly escaped being arrested and cast into a penal unit.  And so our hero despaired afresh.  But things were changing in the Wailing Reach. 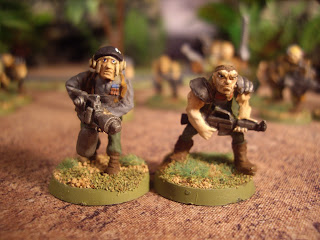 In YOOE 39720, Grand Inquisitor Yadislasz Terrasque, discoverer of the hive fleet which came to bear his name, was appointed supreme commander of all Imperial, colonial and allied forces within The Reach.  Terrasque was above the sort of petty rivalries and jalousies that had shunted Blackridge into obscurity, and when Dutch gingerly approached the Grand Inquisitor with an offer to form a crack commando unit, Terrasque readily accepted.  Dutch wasted no time in tracking down a number of his old cronies and the 'Blackridge Boys' were in the fight once again.
Over the long years of darkness and horror that followed the names of Dutch Blackridge and the Blackridge Boys ascended from obscurity to the legendary to the mythic.  They took on the toughest and most dangerous missions Grand Inquisitor Terrasque could throw at them and accomplished them with a regularity that was almost disconcerting at times.  Though the Dead Men scowled and Imperial Guard officers ground their teeth, the Grand Inquisitor and the Government on Geminion Prime came to embrace the little mercenary band and their charismatic leader.  They came to be held up as examples of martial virtue and as symbols of resilience and hope.  Innumerable jokes, tall tales and songs came to be written about the little warrior band that could penetrate any jungle fastness and come out alive with genestealer skulls swinging from their belts.  And when, at last, the war was won, Dutch Blackridge came to be seen, rightly or wrongly, as one of the key architects of victory.

Improbably, almost impossibly, Dutch survived the Great 'Stealer War, though none of his original companions did.  Before returning to Terra, a grateful Grand Inquisitor Terrasque bestowed upon him the honorary rank of General and the position of Inspector General of Auxiliary forces in the Wailing Reach.  Jealous rivals unseated Dutch soon after the Grand Inquisitor's departure, but he got to keep his pension.

In truth, Arnault wasn't sorry to lose his position. Weary from a life of hard labor, his mighty frame now criss-crossed with scars, limping from his impressive collection of torn muscles and fractured bones, often weighed down by melancholy at the thought of long lost friends, Dutch embraced retirement.  He recruited a small troop of beautiful wives and concubines and spent his final decades as a gentleman farmer and popular media personality on his home planet of Geminion Secundus, spending much of his time strolling among his orchards of fruit and nut trees and producing a wildly successful vidbox show in which he would run over random objects with a tank, to the screams and cheers of his wildly devoted legions of fans.