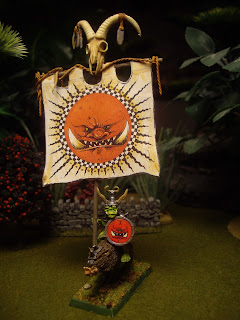 Well, I can't wallow in grief and anger over the debacle with Big Blackie's chariot forever.  (Though God knows I tried.)  Nope, I've got to get over it and back at it sometime or other.  So here is  Unkelphart Bubbleguts, so named for the chronic flatulence he and his boar mount share.  A ferocious admirer and follower of the Great Orc Chief Big Blackie, Unkelphart had the honor of being made army standard bearer conferred upon him after committing many acts of bloodthirsty derring-do on behalf of his Lord and hero. 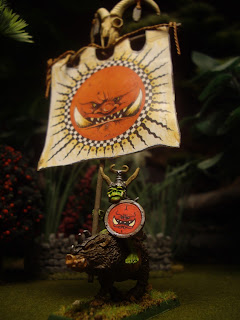 Now, to his supreme joy, Unkelphart is allowed to accompany Big Blackie almost everywhere he goes, so long as he stays downwind of the Orc Warlord's chariot. 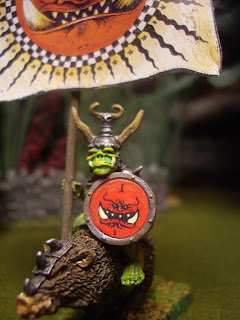 Unkelphart's banner may seem improbably enormous, but one of those little things that made so many of those old second and third edition armies so great was those gigantic army standards that seemed so common back then.  Banners so big you could see them clearly not only from across the room, but from other parts of the house. 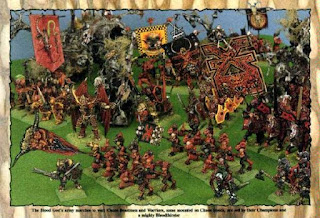 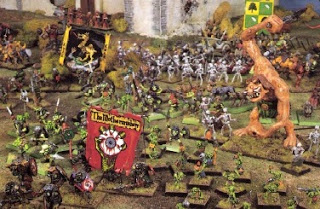 I definitely wanted that look for Big Blackie's horde, so I snipped this beautiful standard out of the back of the Heroes for Wargames book for Unkelphart to schlep around on a frame I made out of wooden dowel. 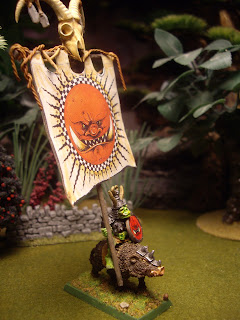 Finished it off with bits of artist's wire, green stuff and a plastic new-school Ogre Kingdoms ram skull bit I scooped up on ebay.  An arcane armorial on the shield to match the banner, and done.  I think he looks pretty good.  Better than he smells, anyway.  Oh, and thanks to Private Weird, whose groovy, old-schooly, wizard-painted-on-the-side-of-your-vany, Hawkwind in the tapedecky, lava lampy, under black lightsy post from the other day helped restore my morale after the chariot calamity.
Obviously I won't be ready for the Big showdown 'twixt Big Blackie's Orcs and Aulech Henschblut's Chaos minions by the end of January, as I'd hoped.  I think I'll try to regroup and go back to finishing one subject a month for the next three months.  Unkelphart here will be January's subject.  Next month I'll do the second chaos baggage train section, which I've already started.  That will leave just Willie da Wheela's chariot squadron in March before I finally return to big Blackie and his Ultimate Black Chariot of Blackness.  Sound like a plan, Mouse?  Yeah, Mouse.  Good plan.  Go wif it! Ok, Mouse, thanks.   And....... 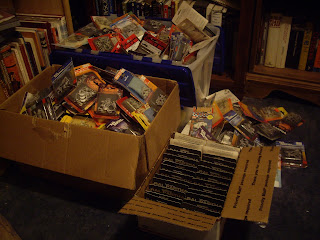 Friends, Romans, Countrymen...I have too many miniatures!  I never thought that such a thing could be, but upon sober reflection, I have concluded that it is actually wrong to continue to force my wife and child to sleep outside in a tent in the snow because there is no room for them in the house, what with all the figures!  So, tempted by an ebay offer of 1,000 free auctions, I am selling a whole bunch of stuff, starting this month and to continue each month throughout the year, to good homes at what I think are pretty reasonable starting bids.  Many are still sleeping safe in their blisters 20 or 30 years after having been cast, others will be loose minis culled from certain spurs of the lead mountain which I fear my paintbrush may never ascend. 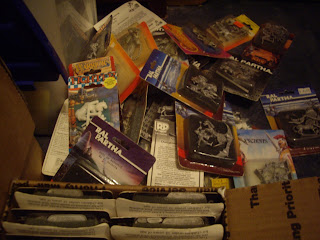 Lots of Ral Partha & Alternative Armies fantasy, Ral Partha, RAFM and Minifigs historicals, a good amount of 80s Oldhammer and Roguehammer stuff, including a few rare gems that I love but which just don't fit into any of my existing armies, and an abundance of weird and interesting odds and ends are going to get cleared out. 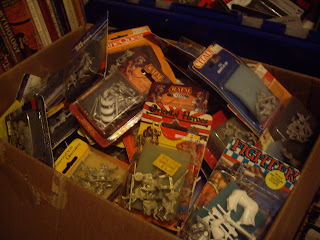 Stop by my Ebay front anytime to see what's on offer.