The Fall of Mouse 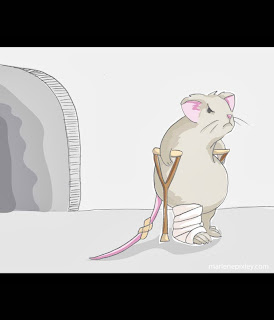 So, some feral horses in the area had been playing Vikings, knocking down our fences, helping themselves to our pasture, picking fights with our own horses and generally making a nuisance of themselves.  At some point we made the decision to run them back out the hole they had made and fix the fence behind them.  Somewhere between the planning and execution stages, my horse was startled and panicked by something absurdly insignificant and began to try to rid himself of me.  I lost my reins but still managed to keep my seat.  Noticing that my ungallant steed was carrying me toward a large pile of ancient, abandoned and rather sharp and menacing-looking machinery, however, I took the decision to bail out of my saddle before disaster struck.

Disaster struck anyway.  I landed badly, threw my left shoulder out, and completely shattered my right wrist.  Yeah, the one I paint with.  Awesome.

Had a large chunk of metal installed in my forearm today, and they gave me some rather speedy and intense pain medication so I'm on the mend, but got no idea when I'll be able to work or paint again, and the Army National Guard Officer Candidate School, which I was hoping to attend next Summer, is almost certainly never going to happen now.  Sigh.  Oh, well.  I like being an NCO anyway.

In spite of the injury, I imagine I'll still be posting some, since I've got nothing but idle time in which to sit around and concoct army lists, dream up games I'd like to play someday, and work on comic book stories, though having to type with my left hand is a pain.  Hopefully I'll make better use of this time than just sitting around spending money in the Miniatures and Wargames section of ebay...