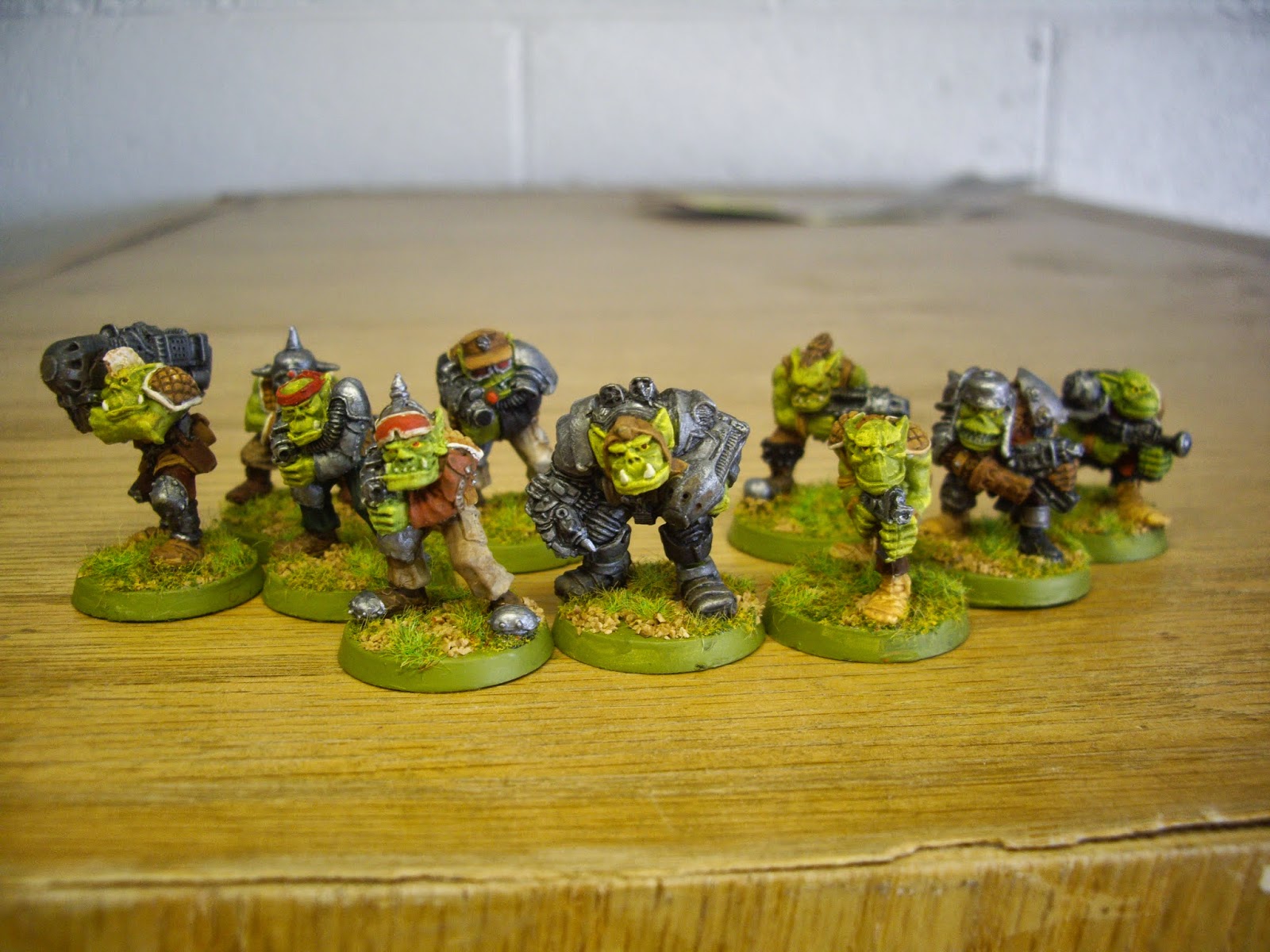 The Wailing Reach may be far removed from Orkoid space, but small bands of Ork raiders and pirates have always been present in the region.  Lately, their numbers have increased as various small warlords have descended upon the Reach, eager to pick the bones of the isolated and war torn planet  Geminion Secundus. Most come in search of slaves, plunder, feasting, fighting, or just a chance to pick through the blasted and fascinating scrap-pile which Geminion Secundus has become over the last few centuries. 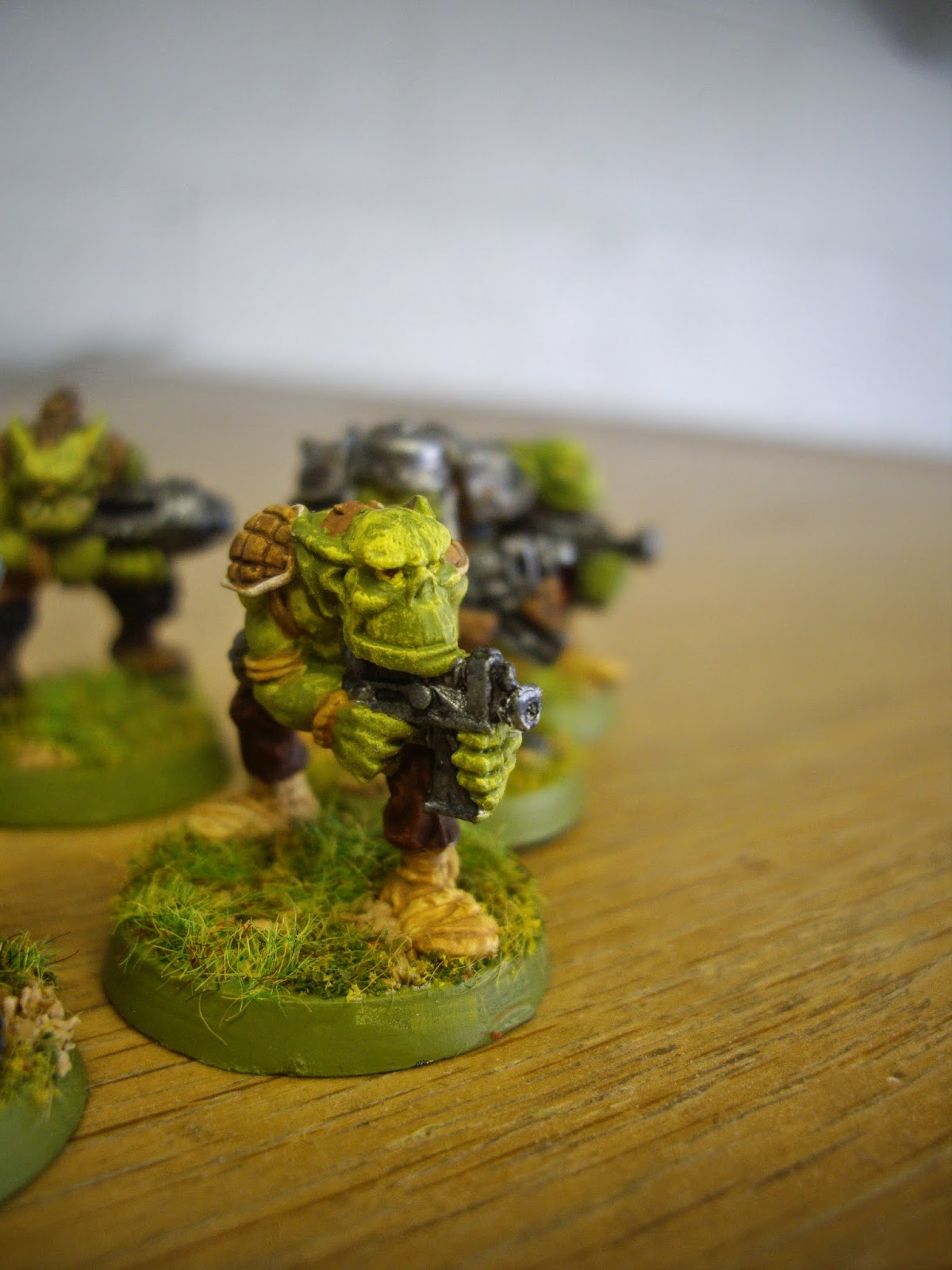 An eccentric few have taken to serving as mercenaries in the forces of the planet's notorious Gang Bosses, or have taken up the distinctly un-Orky business of trading goods with some of the locals.  Sometimes that gets boring, though, and you just have to start a fight with somebody.
Which is fine. really 'cause in The Reach there's always somebody who's willing to fight about something. 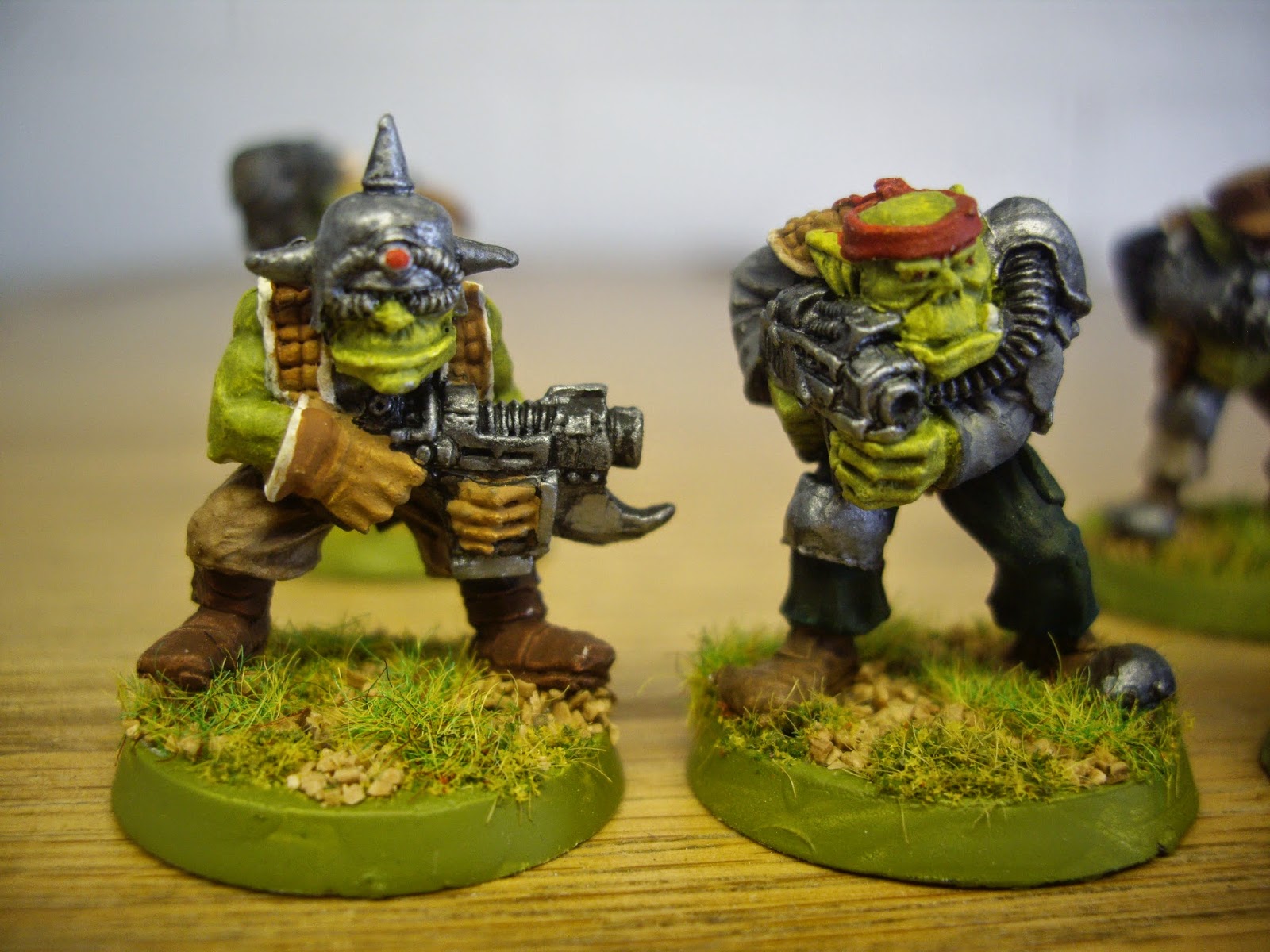 There are the Voldraadi, who run the place and who are attempting to run the Space Marines and Imperial Guard out of the system.  The Emperor's finest are not budging, but they don't have the strength to launch a direct assault on the Voldraadi capitol of Geminion Prime.  So they content themselves with trying to destabilize the Voldraadi power structure on other planets in the system.  On Geminion Secundus, Imperial loyalists try to help the Space Marines topple the Voldraadi government while powerful Gang Lords attempt to carve their own squalid empires out of the decaying flesh of Voldraadi society.  In and out of the chaos and carnage wander the Orks and the Eldar pirates, the dreaded Void Wasps and the Steel Breeze.  All have clashed with Imperial forces, and are happy to help the conflict continue as long as possible in order to gain the greatest possible profit from it. 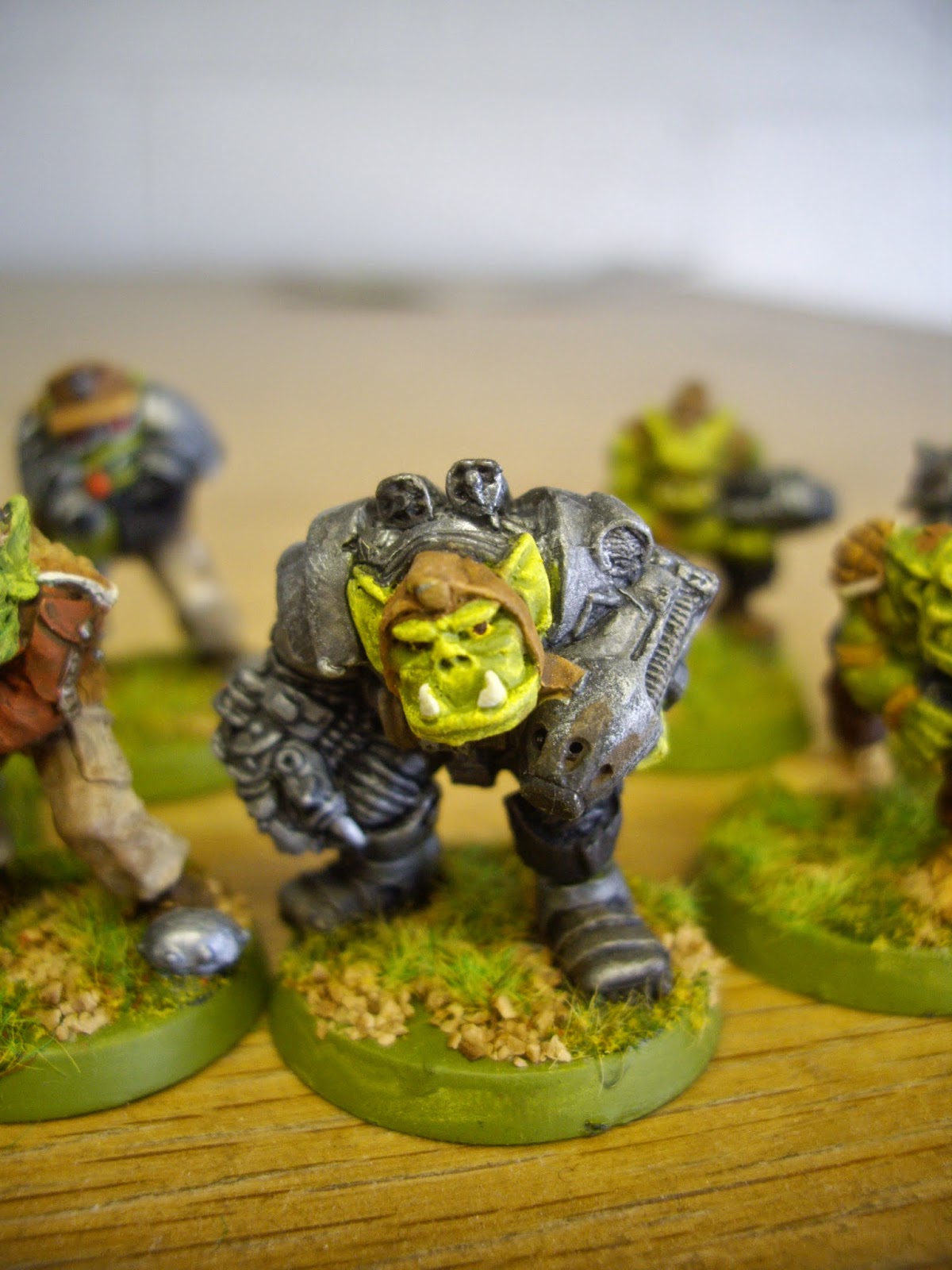 Snargrel Barffbagg is fairly exemplary of the hateful Orkish scum who have haunted the Wailing Reach in the last few years.  He is well known to have traded weapons and drugs to Geminion Gangers like Pieter Porque in exchange for human slaves, has fought the Dead Men Space Marines as a mercenary working for the Voldraadi, and is believed to have been behind the infamous raid on the Imperial armory on Nepenthe.  The sooner he is hunted down and made an example of, the better. 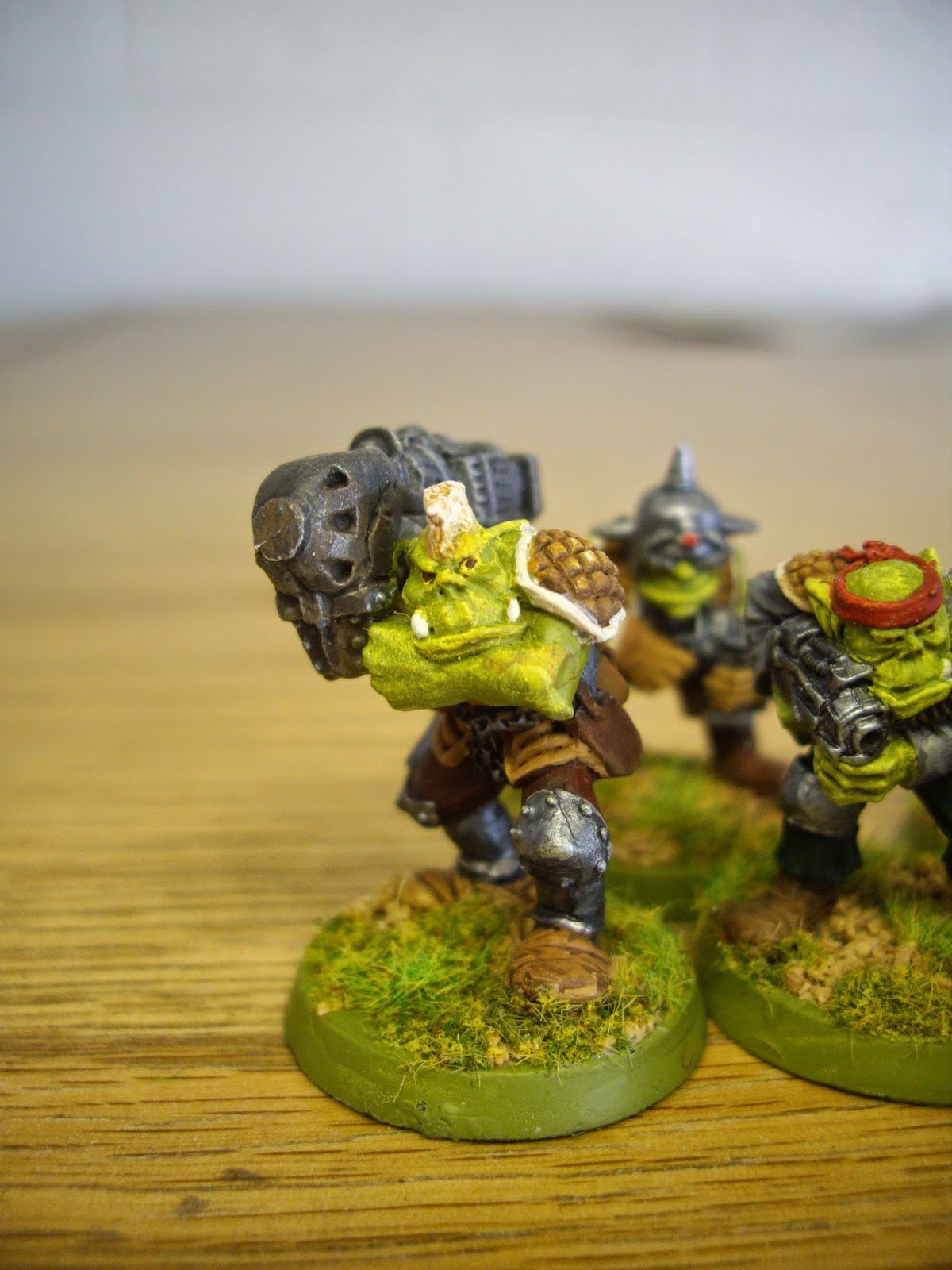 Yar!  My first new Space Orks in many a moon!  The oldest Space Orks, the ones that came before they all had the separate plastic arms are my favorite range, and I intend to build my Ork gang more or less exclusively of them. 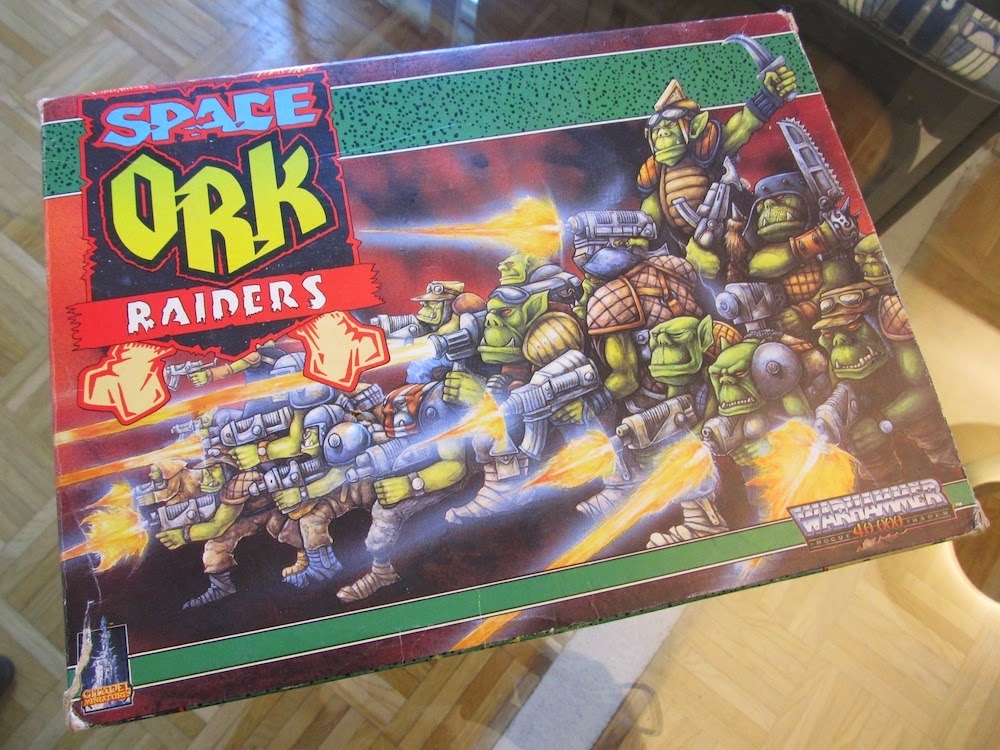 I tried to match the colors on the boys to those on the old Space Ork Raiders boxed set 'cause I'm very fond of it and tend to wax mighty nostalgic when gazing upon it. 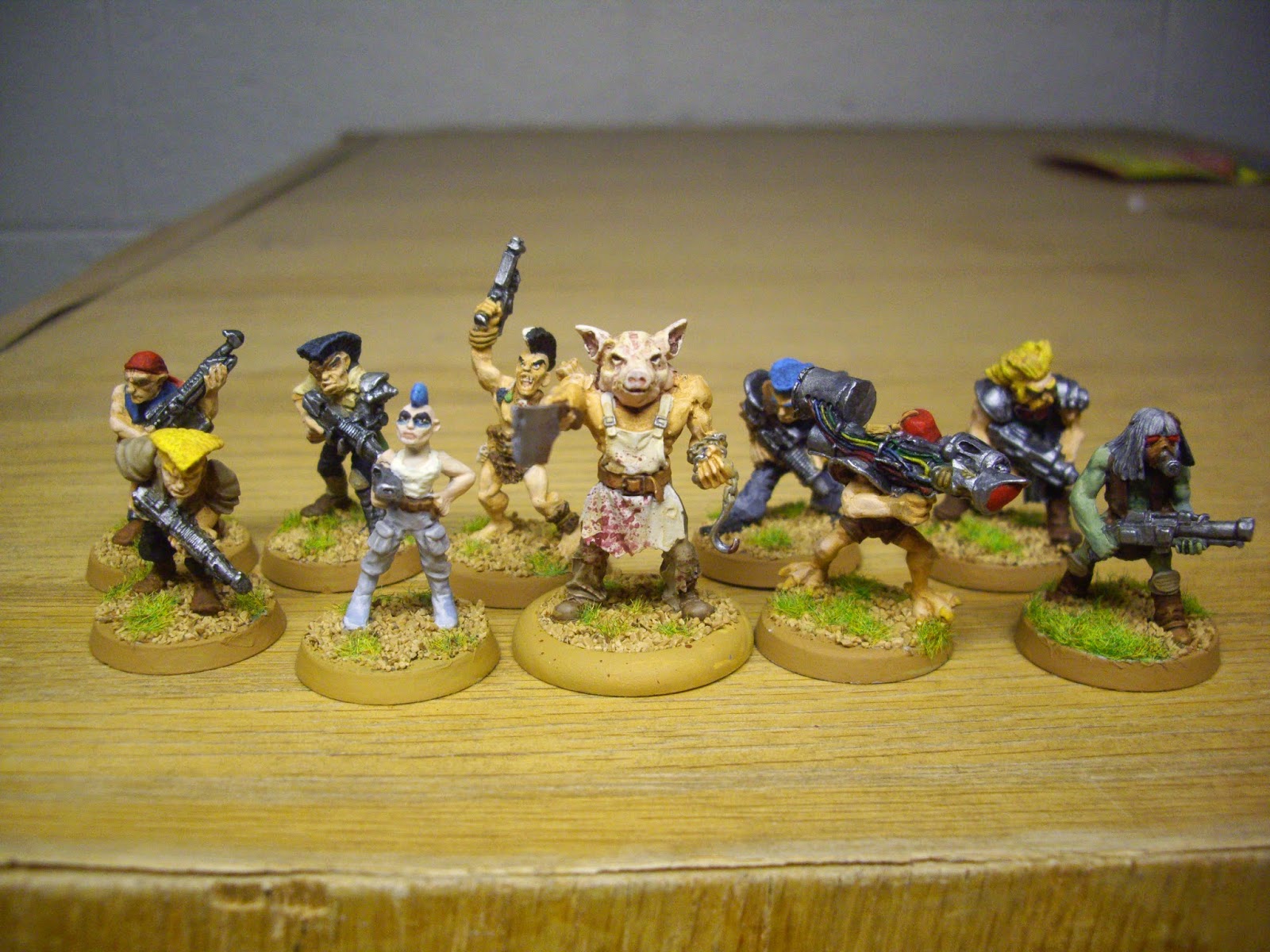 In one of the innumerable crumbling, post-urban hells of Geminion Secundus, there is a dirty shop in a dark street.  Behind a greasy counter a bright, quick girl with a shock of electric blue hair atop her otherwise naked scalp sells soy-lend cake and fungus bread, the sort of bland and miserable food which is the lot of all but the elite in the Geminions.  But no one comes to the Blue girl for Soy-lend cakes.

They come for the sausages. 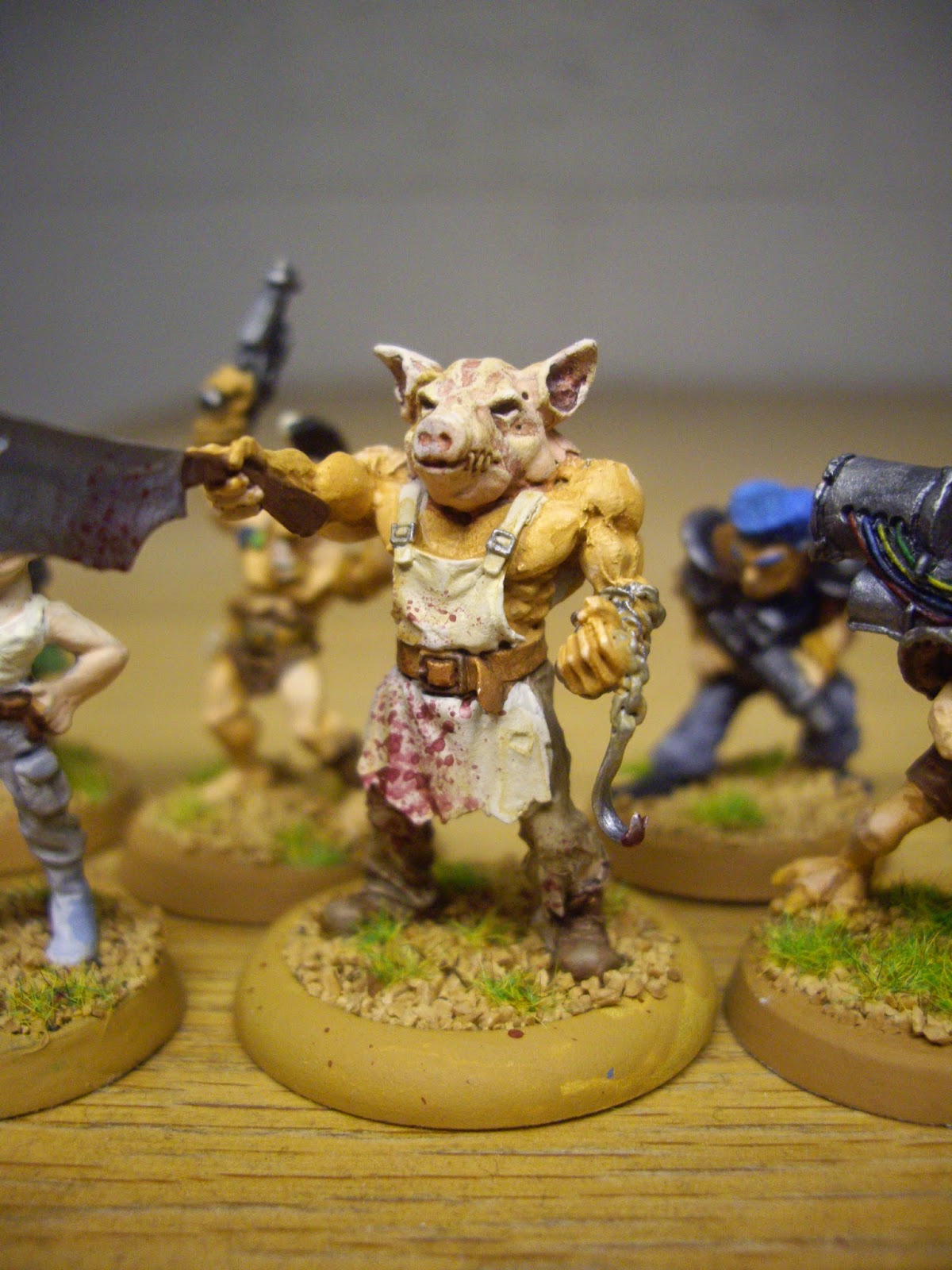 For generations, meat has been a luxury exclusively enjoyed by the ruling Voldradi class, it's production deemed too expensive to permit it's consumption by mere proles.  But a few enterprising individuals, especially on the relative backwater of Geminion Secundus, have managed to do a brisk trade in imported illicit comestibles.  Pieter Porque did well in this forbidden business for some time.  As Voldradi agents began increasingly  to hound him and to interdict his shipments, however, he began to supplement his supply of Pork and other meats with more...readily available stock.  No-one asks exactly what it is in Pieter's sausages these days.  No-one wants to know.  It is enough that it is meat.  No one asks why Pieter has taken to wearing the head of a gigantic boar as a mask.  No one wants to know.  It is enough that he supplies what their famished bodies require. 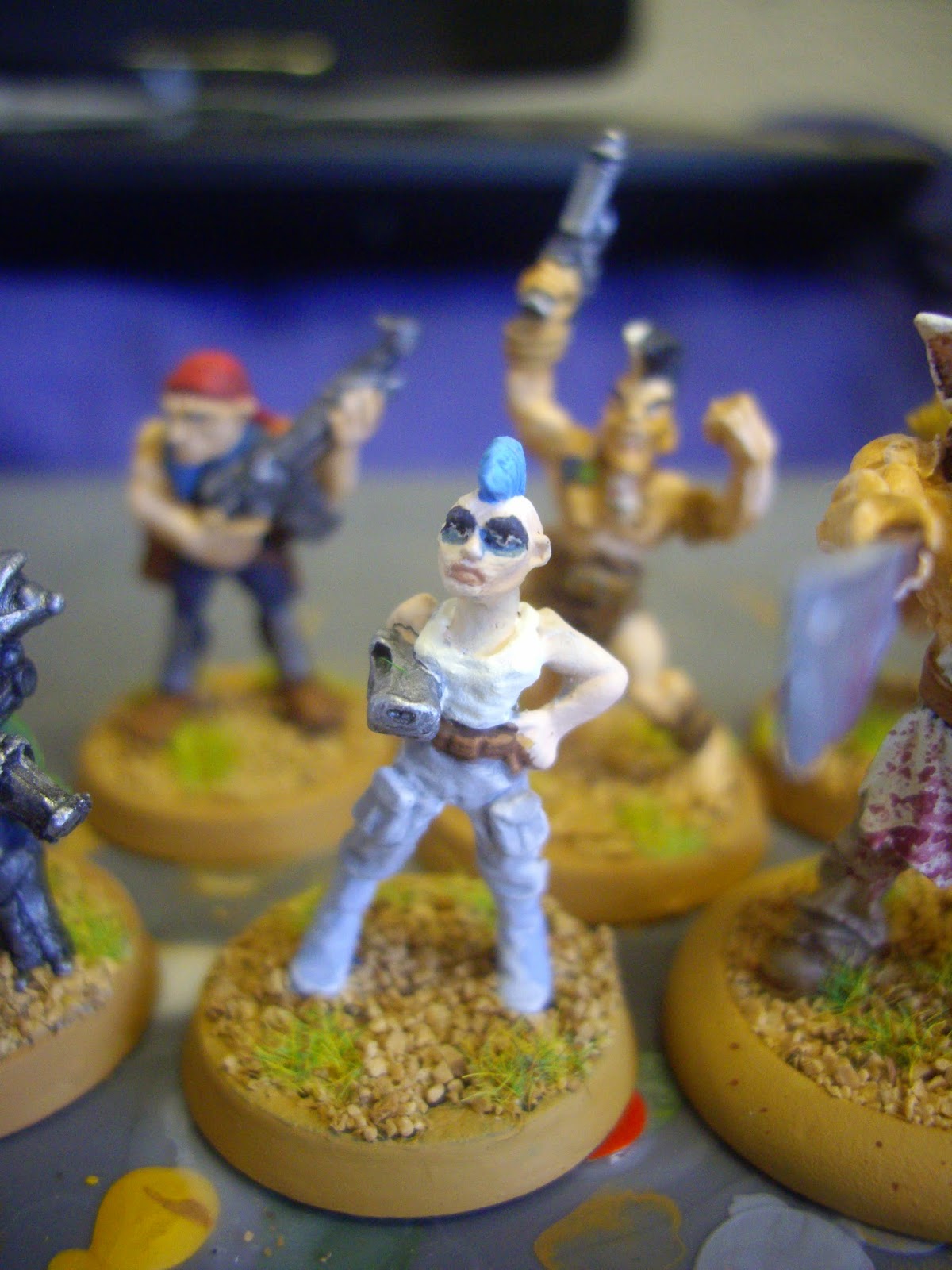 And the blue girl?  They say she keeps a little las pistol behind that counter.  And she's quick to use it.  And if she's working the counter, Pieter's sure to be chopping up the goods somewhere in the back, within easy call.  So mind your manners, and don't try anything.  Or you could be the next to go in the grinder. 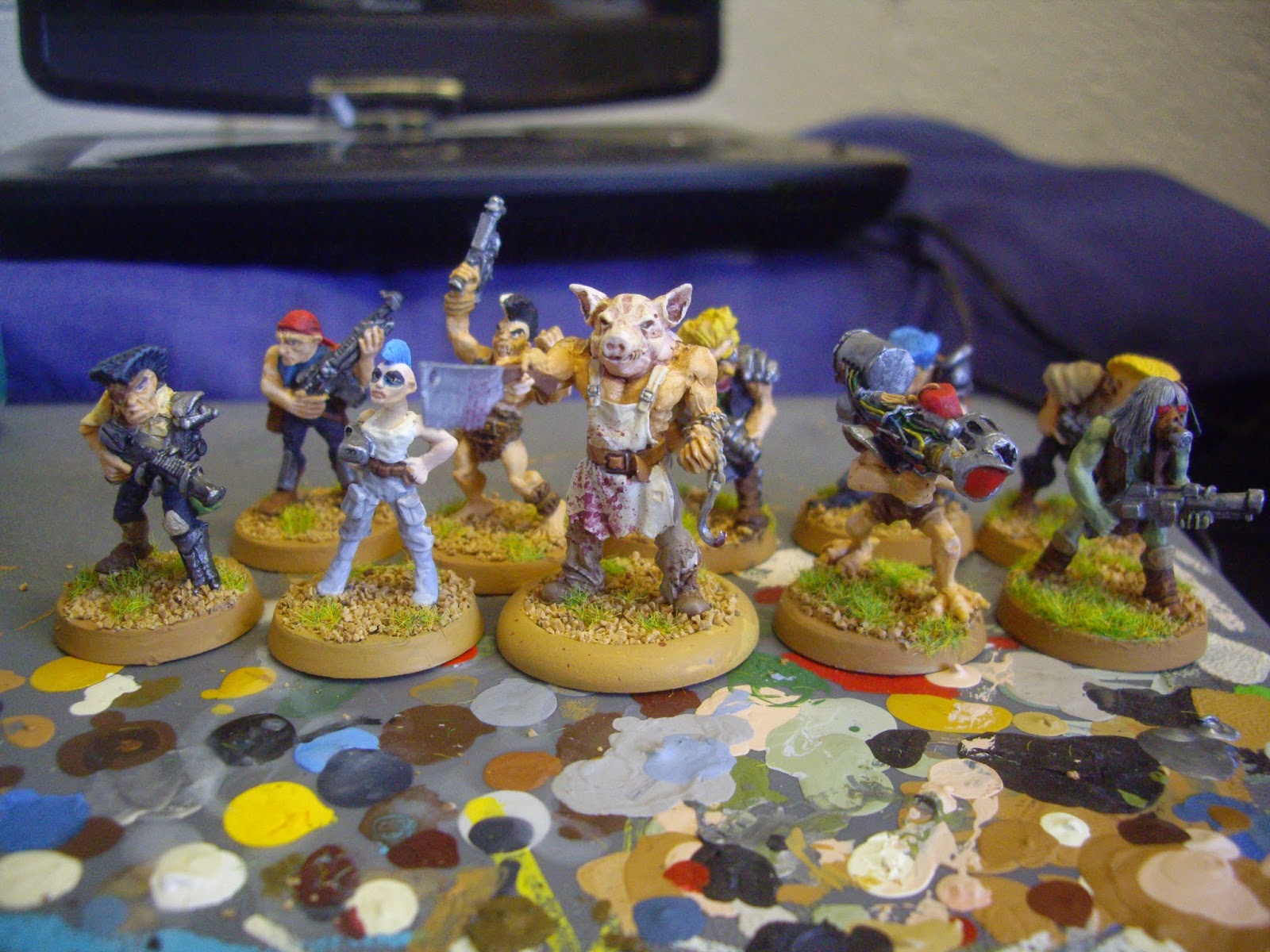 Here is Pieter with a few of his enforcers.  Pieter runs a small empire in verboten foodstuffs and slaves, which he trades to the Orks for things which are in high demand among the gutter-scum of Geminion Secundus, notably weapons, exotic squigs, and drugs.  The Orks have been mightily impressed by his fighting and trading prowess and by his alarming personal style, and are happy to do business with him.  Some have even expressed an interest in working for him! 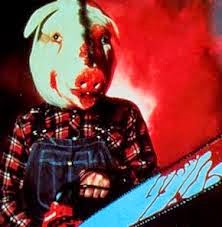 Most recent recorded digi-image of the degenerate Ganger Pieter porque.  Bolter-Brother Baddluch , of the Third Company, was interred at the fortress monastery on Ran shortly after the fight in which he captured this image.

Pieter needs a lot of enforcers to help him defend his territory against rival gangs, Voldradi army forces, and, lately the Dead Men Spaces Marines.  The Space Marines are currently attempting to wrest control of the Geminons back from the Rebel Vodradi and launch frequent raids on Geminon Secundus to fly the Emperor's banner, to make contact with loyalist factions, and to wreck as much havoc on the Voldradi power structure as possible.  The Marines don't necessarily have a problem with Pieter's smuggling or his cannibalism, but Pieter, like all the Gangers of the Geminions, sees their appearances as violations of his territory, and a number of vicious clashes have broken out between Pieter's private army and the Emperor's finest. 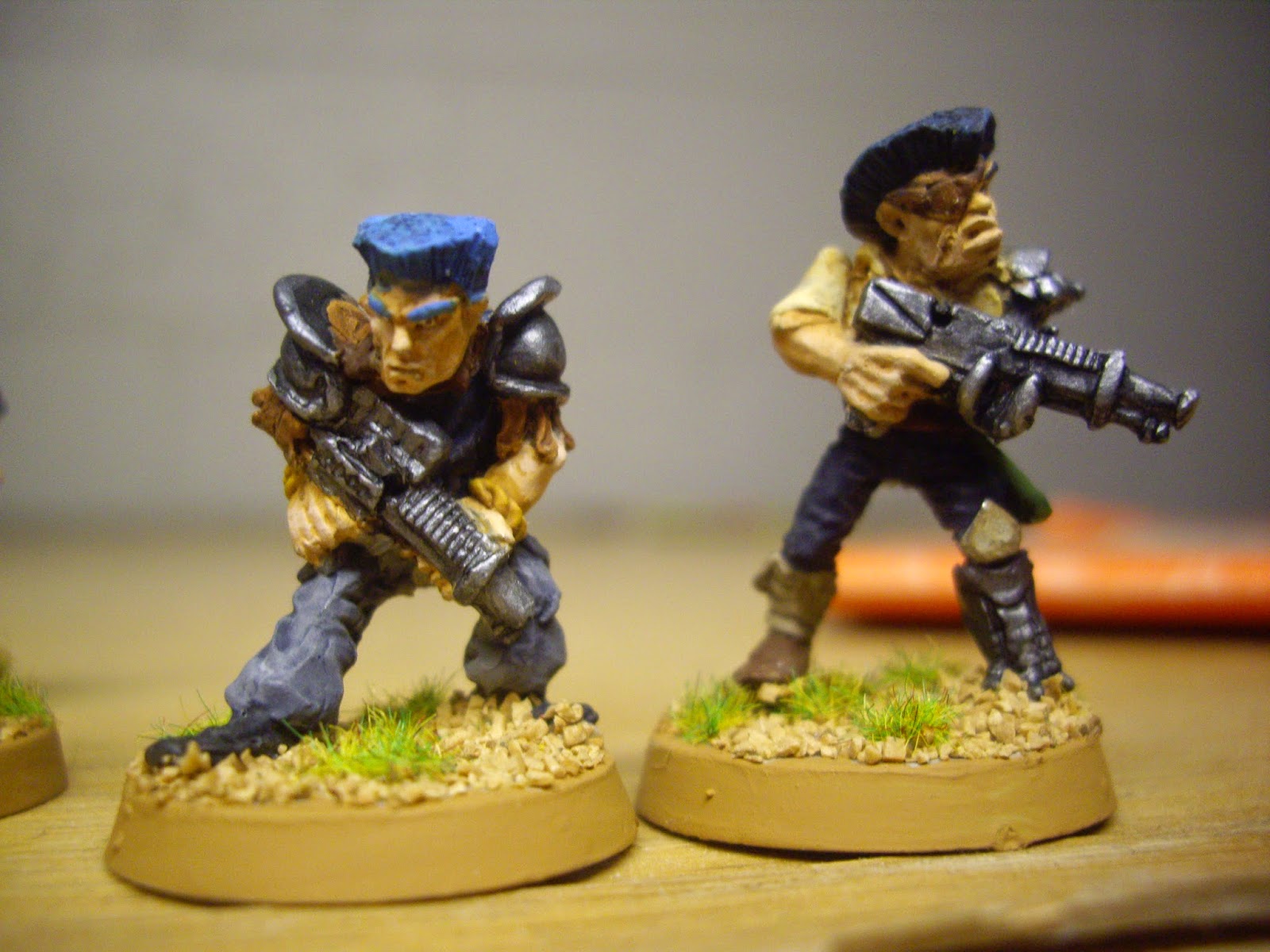 A brace of desperadoes with auto guns.  Note the good quality prosthetic gear on the pirate to the right...Pieter's loyal soldiers are well cared for.  Such amenities could never be available to Geminons outside the Voldradi ruling caste and their servant class, the Bella Canni. 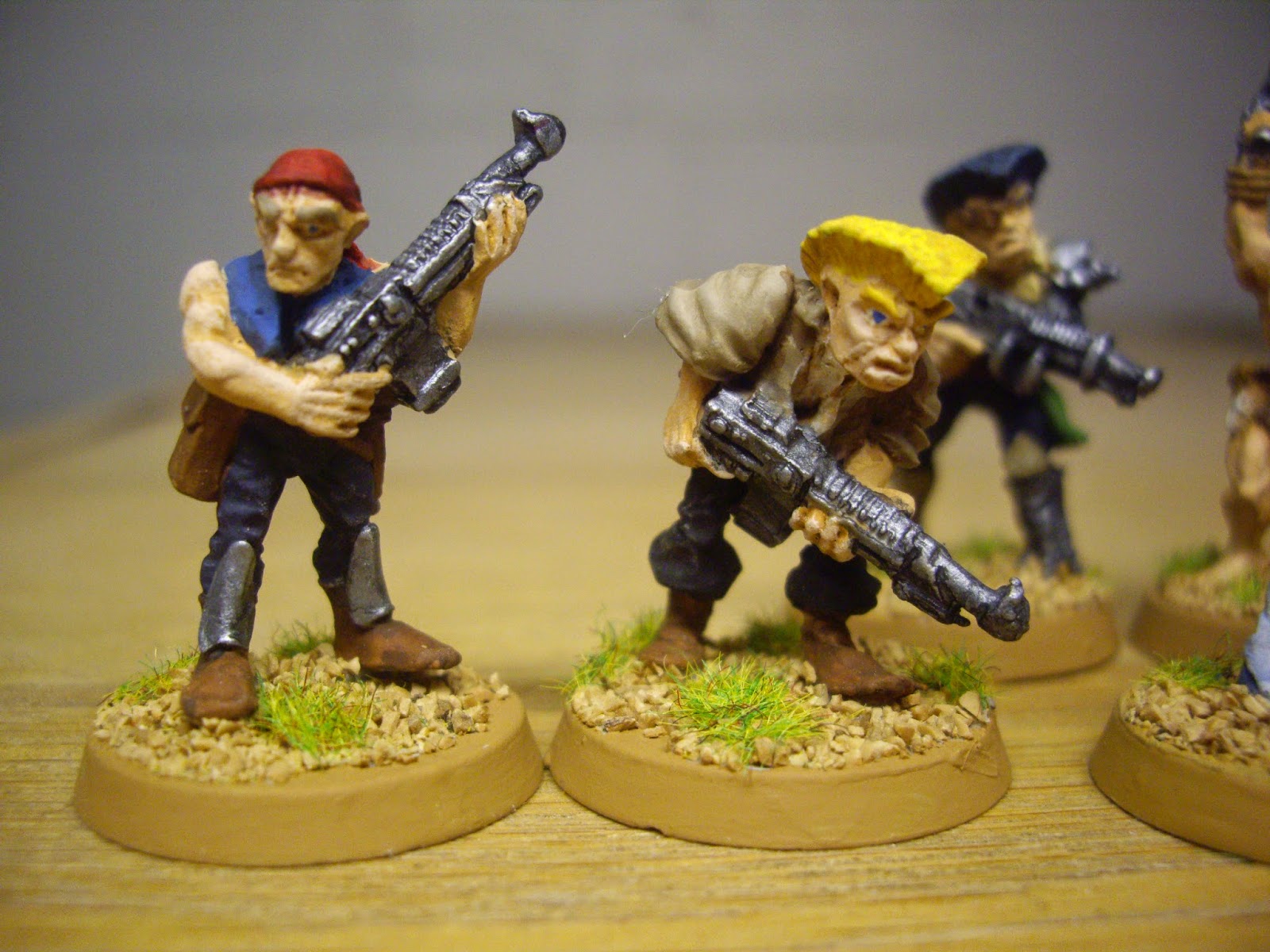 More of Pieter's deperadoes.  Fit and well-fed, their confident and aggressive bearing is in stark contrast to that of most Geminions. 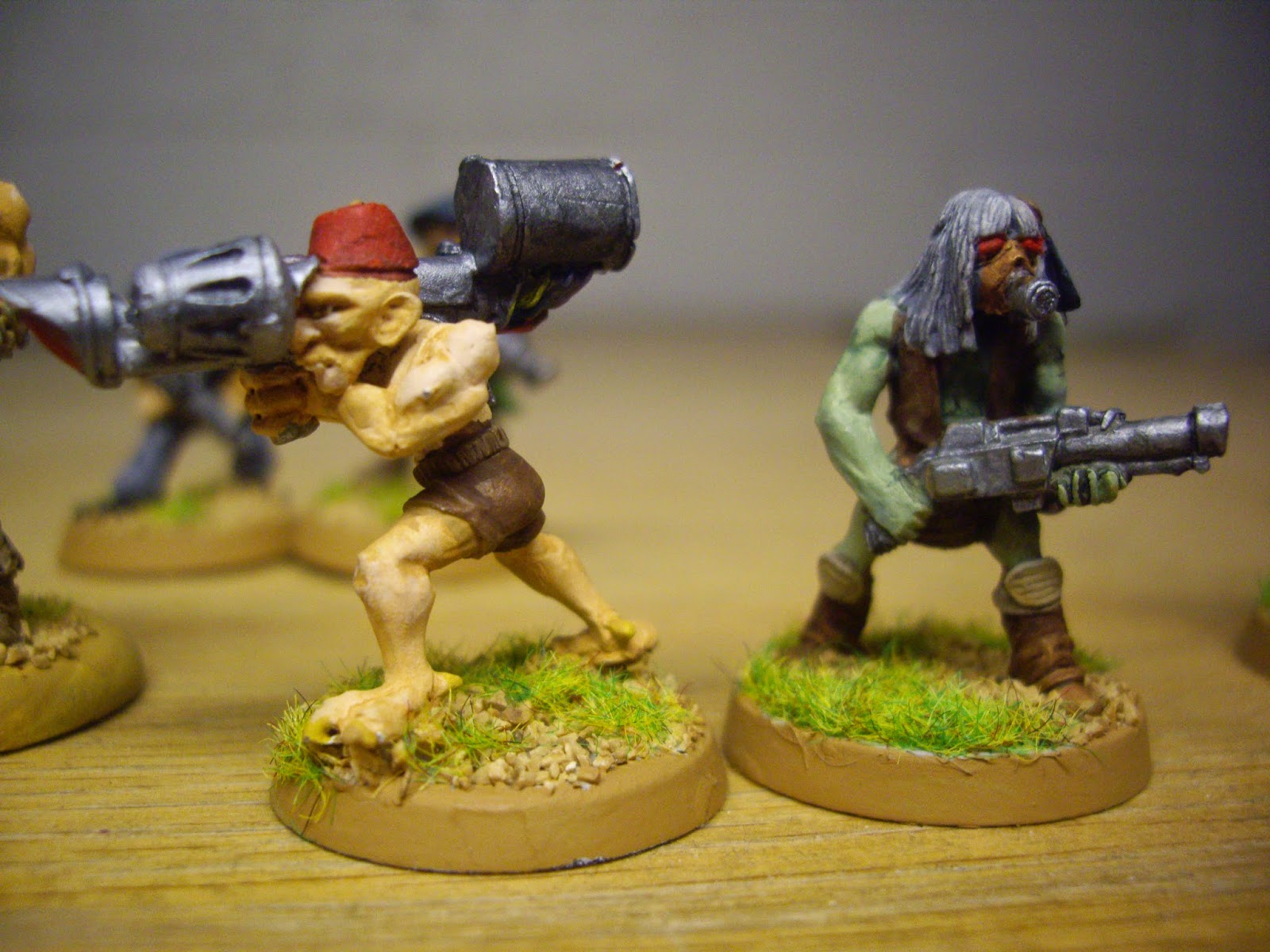 Mutation is no less common in the Geminions than anywhere else in the Imperium.  In some cases, it is more so.  The mutant on the left has been struck with the dreaded Bird Feet mutation (see W40k Rogue Trader, pg. 53).  Although useful for anchoring one's self to the ground whilst firing a heavy weapon, such as the las cannon pictured above, it can make it very hard to get a girlfriend.  Perhaps he wears the fetching red fez to distract attention from his deformed lower extremities..

Pieter Porque is only one of a number of notable gangsters operating in the Wailing Reach, wherein the Geminions are situated.  His clashes with Orks, Space Marines and Voldradi alike will be documented here. 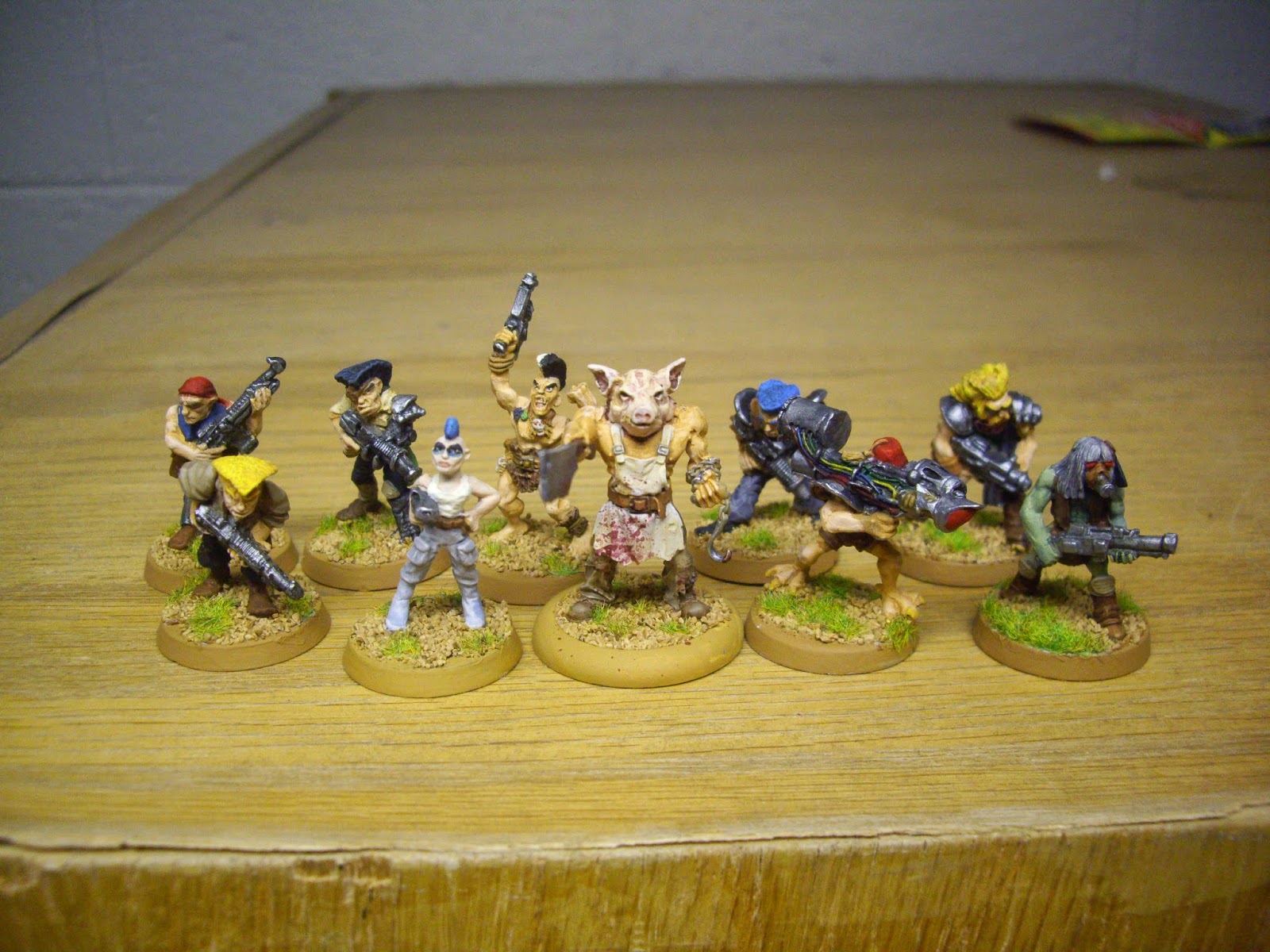