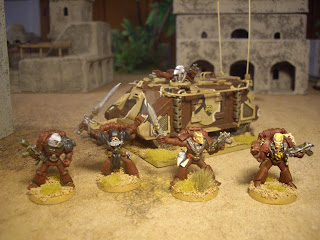 Dead Men Space Marine Officers  huddle during a brief lull in the fighting in Operation Kundunn IV.  After Imperial Guard and Planetary Defense Forces Repeatedly failed to quash tribal resistance in the Notorious Kundunn region of Geminion Secundus, Three Companies of Dead Men and supporting elements were dispatched to clear the way for a new offensive.  Kundunn IV broke the back of tribal resistance in three weeks, though mop up operations continued for years afterwards. 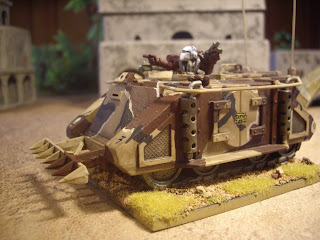 Two views of a Dead Men Space Marine Rhino halted in the middle of a Kundunni town. 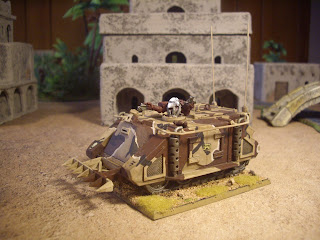 Marine Commanders frequently rely on the speed and protection of the Rhino's armored hide to carry them across the battlefield.  The camo paint scheme applied here over the more usual scab red neatly blends with the rocky mountain and scrub-forest terrain of much of Geminion Secundus. 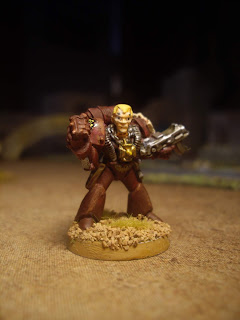 A Captain, a veteran of the Chapter's First Company Judging by his Terminator Honors, punctuates his orders with a flourishing of his awesome Power Fist.  Traitors, Beware! 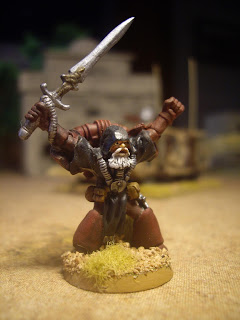 Another attendant at this leaders' meeting, a librarian judging by his tabard and force sword, demonstrates his enthusiasm for the fight... 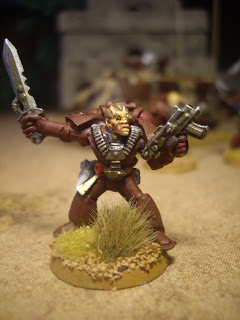 A Lieutenant prepares to wade into battle with power sword and purity seals... 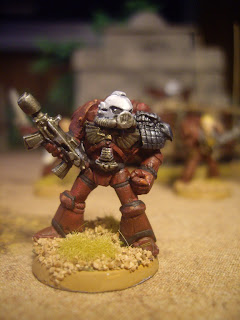 Fascinating shot of another, remarkably well equipped lieutenant wearing what appears to be a modified suit of mark VII armor.  Mark VII armor was unusual amoung the Dead Men during this period, the chapter being reliant for the most part on the older Mark VI 'Corvus' suit. Also unusually, he carries a bolter rigged with a silencer.  His left shoulder pad is perhaps most interesting of all:  Such armor appears in no other data faxes available to this author.  It may be a version of the Pactum Corvi, that rarest of awards said to be given out to members of the Raven Watch Chapter who distinguished themselves by repeated acts of insane valor and devotion.  If so, it is evidence of the survival of certain customs and practices of the original chapters through the consolidation of The Death Eaters, The Harvesters and The Raven Watch into the Dead Men Space Marines Chapter... 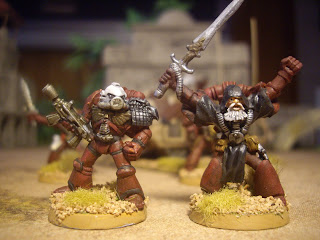 The last few months have been devoured by furious preparations for leave taking, and mighty little time has been left over for hobby stuff.  A brief lull in the frenzy has come as friends and I wait for the Thunderhawk to show up and whisk us away for an extended stay on strange new worlds.  I wanted to get these lads done before I left home.  They weren't quite finished but this was as near to complete as I could get them in time.  Snapped these pictures in great haste, virtually on my way out the door, and they've been sitting on my laptop for over a month waiting for me to get a chance to post them.

I'm pretty optimistic about having a decent amount of time to paint and goof off whilst I'm there.  Hopefully friends and family will soon be able to mail off the several boxes of based and primed minis I prepared to get me through the trip!  I've also discovered a few lapsed game nerds amoung my traveling companions so there may even be opportunities for a few skirmishes here and there!
Posted by Mouse at 1:57 PM 5 comments: