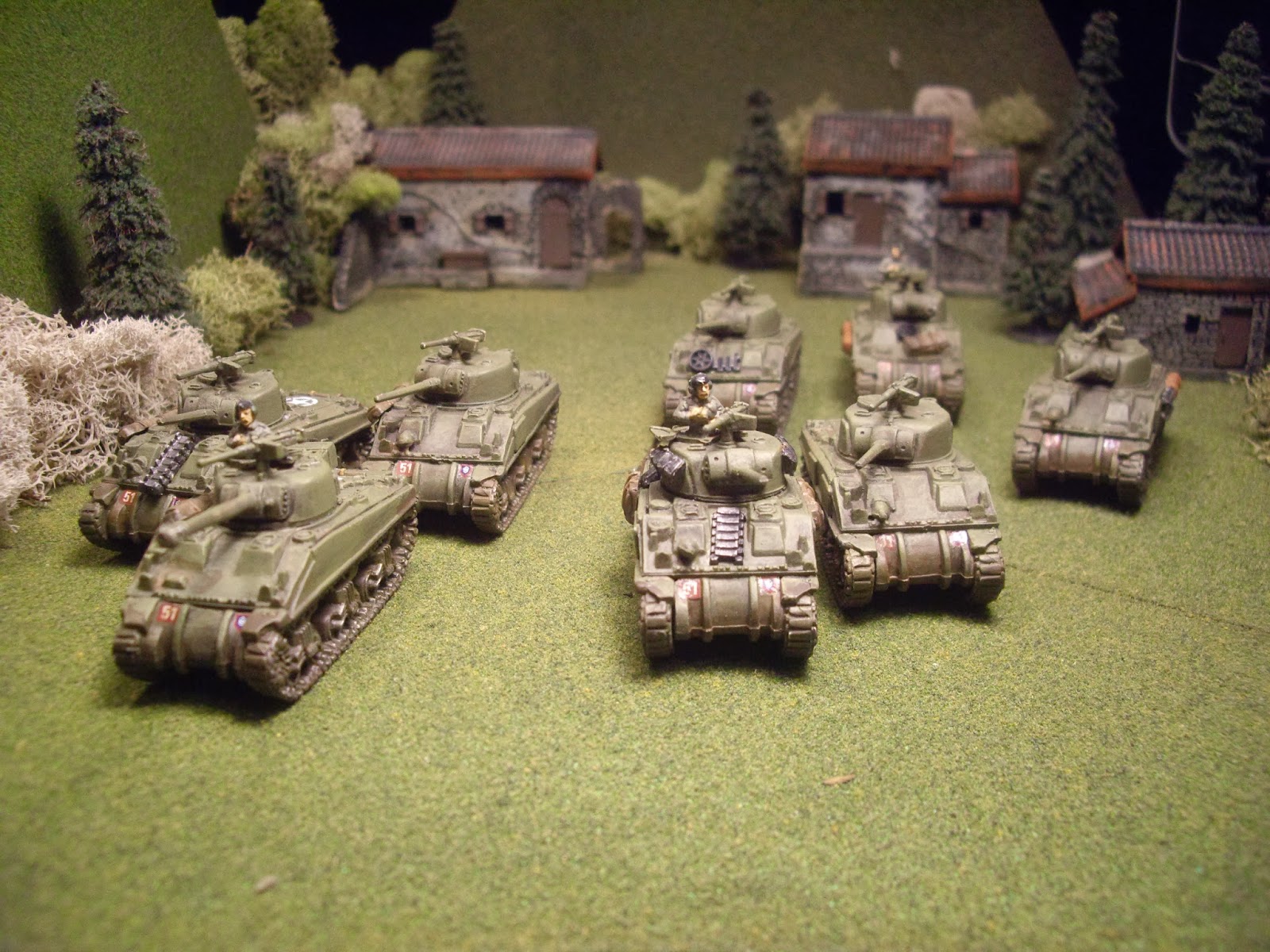 So there I was, broken in bed, studying the ceiling and trying not to feel overly sorry for myself.  My wife, sweet, thoughtful creature that she is, bought me a small stack of WW II books to read because she knows I like that kind of stuff.  And here my troubles began.  Over the next couple of weeks I picked up a few more new tomes, notably some volumes in the so far excellent Stackpole series, and rediscovered a few old loves, such as Guy Sajer's The Forgotten Soldier.  I was quickly getting into a rut.  You know how it is.

Once I could get up and around, I got out my Bridge Too Far and Battle of Britain DVDs.  I watched them over and over as I nudged a few minis glumly around on my desk, entirely unable to paint.  And then there was the internet.  The verdamnt internet.  Always sitting there in predatory silence.  Patient, watchful.  Wanting me to get on it and buy things.    And at last, with little else to do, get on it and buy things I did.  Tiny tanks and tiny men.  Too many of them.  You know how it is.

Anyway here are some of them. 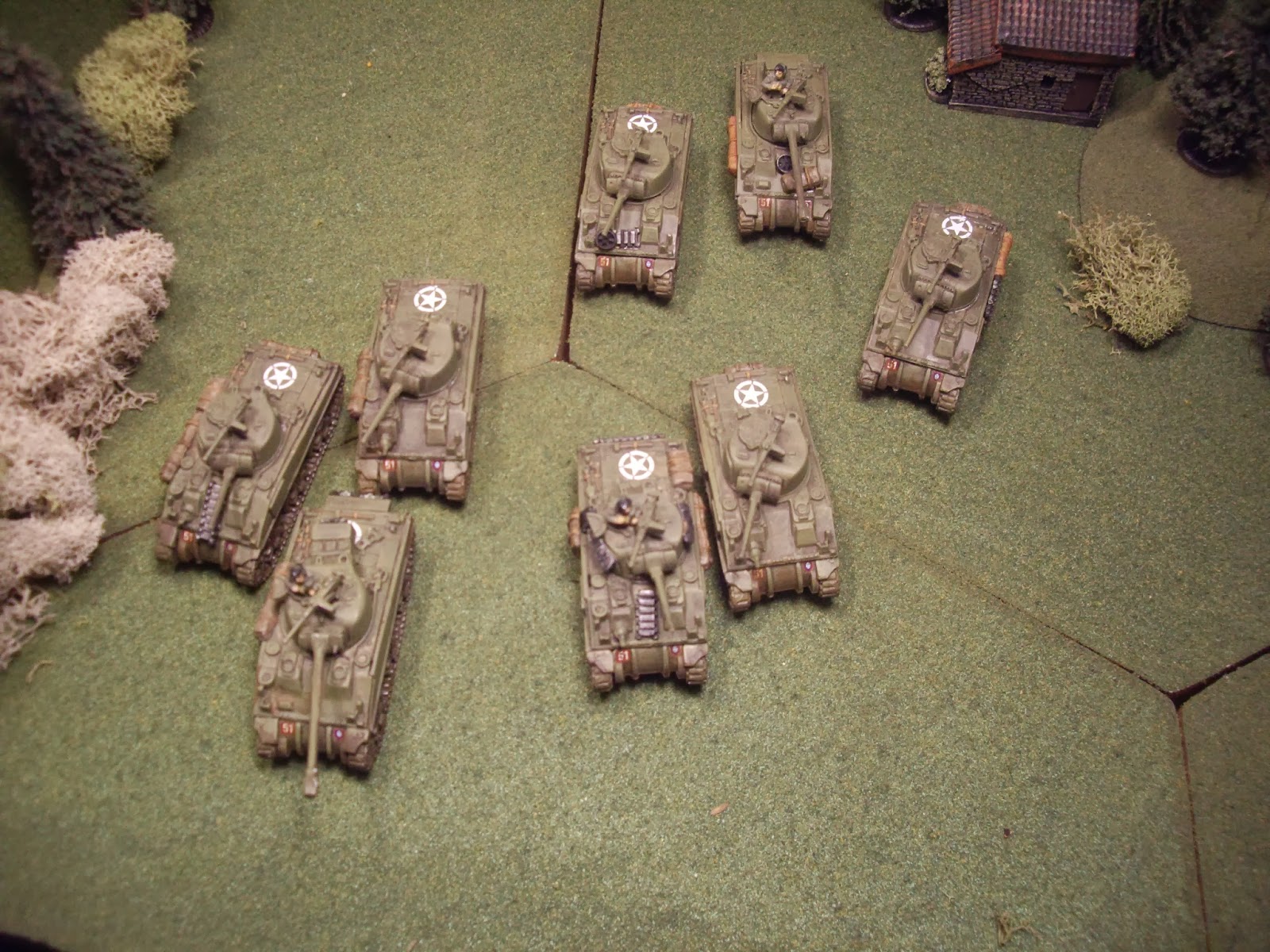 A long time ago, I discovered something on the FOW site that got a big, fat iron  fishhook in my attention; these little 600 point starter forces.  I became fascinated by them and of course I had to have some of my own.  So now I've got late war British armor and American mechanized infantry, and German Grenadiers to fight them.  I'm starting out at 600 points with each army, and then I'm going to build up each army in 300 point blocks, until I get bored.

So here we go:  My British Armour Company, 600 pts:  (I'm using the FOW Armies book that comes with the new edition rules, not the high-speed Atlantik Wall and Overlord books; I'll acquire those eventually, but don't have 'em now.) 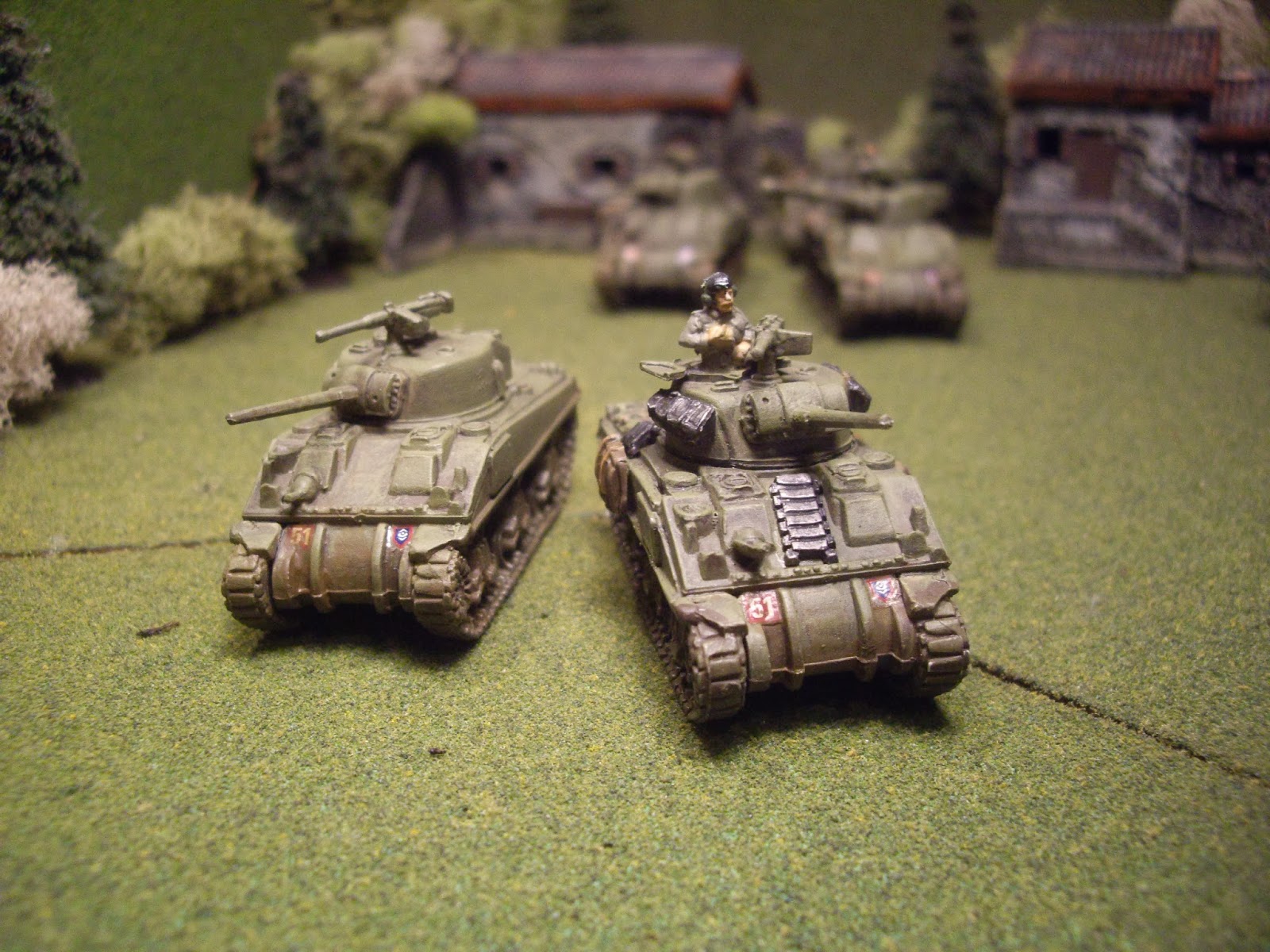 The CO and XO.  The extra tread should probably be green, but I sort of like how it looks painted as bare steel.  These are the plastics from the boxed Open Fire set, but purchased separately from bits merchants online.  Somehow, I got frames that all had the same commander figure.  I tried to get 1 tank with a distinctly different commander by buying one of the resin-and-metal Sherman Vs, but the commander figure that came with it was too short and skinny to look realistic next to the others.  Certainly, his smaller size would have poorly represented his Boss-Man stature. 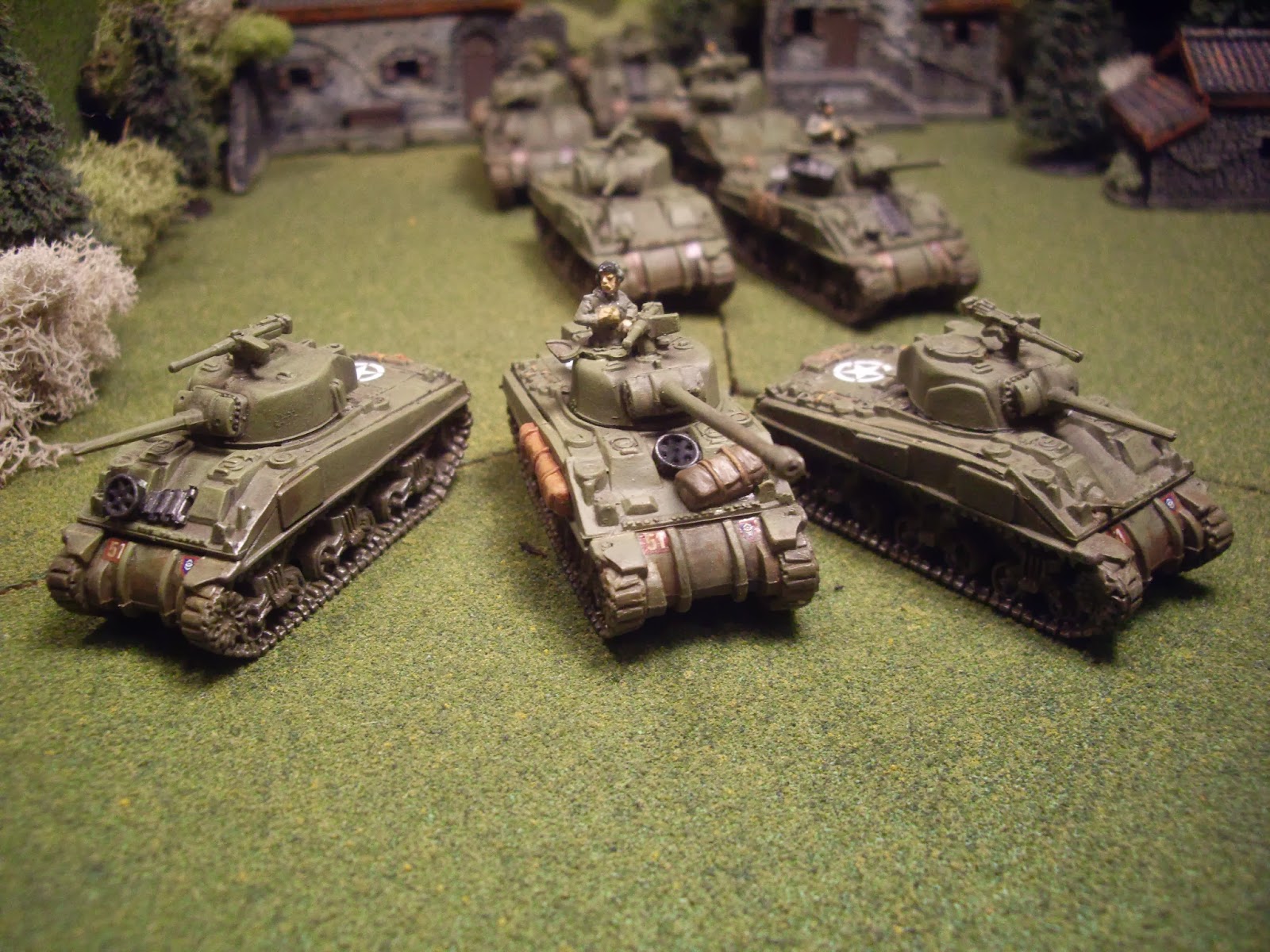 I originally wanted my lads to be denizens of 11th Armoured Division for no other reason than that the 11th's division patch looks, frankly, badass... 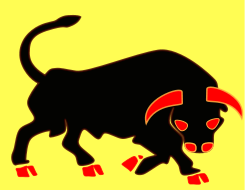 But the decal pack I ordered seemed to be an older version that did not include the raging bull patch.  It did, however, have the somewhat disturbing all-seeing Eye of Sauron device of the Guards Armoured Division, so I was ok with that. 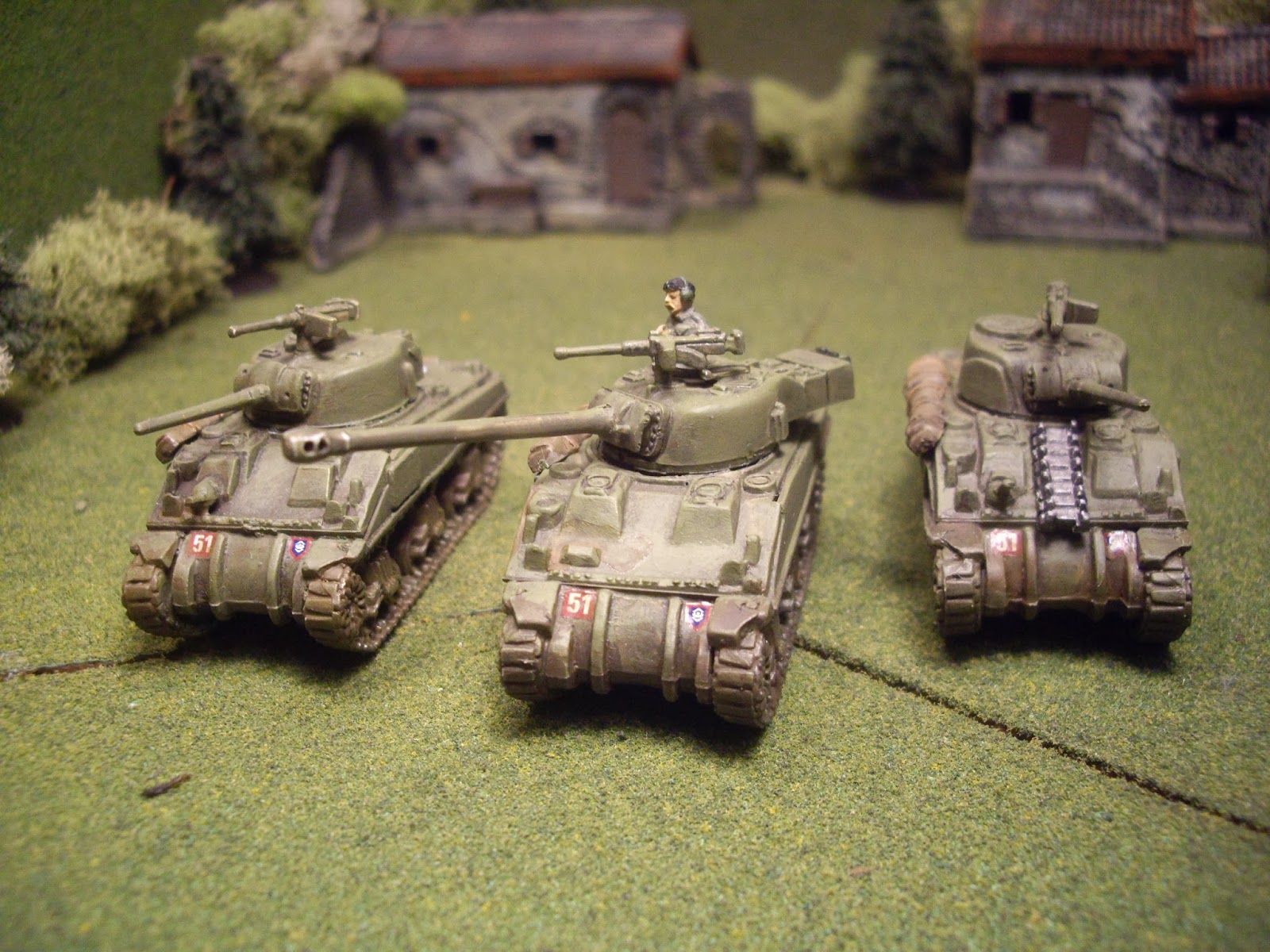 I would have preferred that my Guardsmen had been of the Irish regiment, (had images in head of Michael Caine as Joe Vandeleur, wearing that pained expression of quiet and dignified desperation as he tries to cram his regiment up the accursed single lane highway to Nijmegen) but no, the decals I had only supplied the '51' of the Grenadier Guards, and I was anxious to get started.  Grenadier Guards it would be. 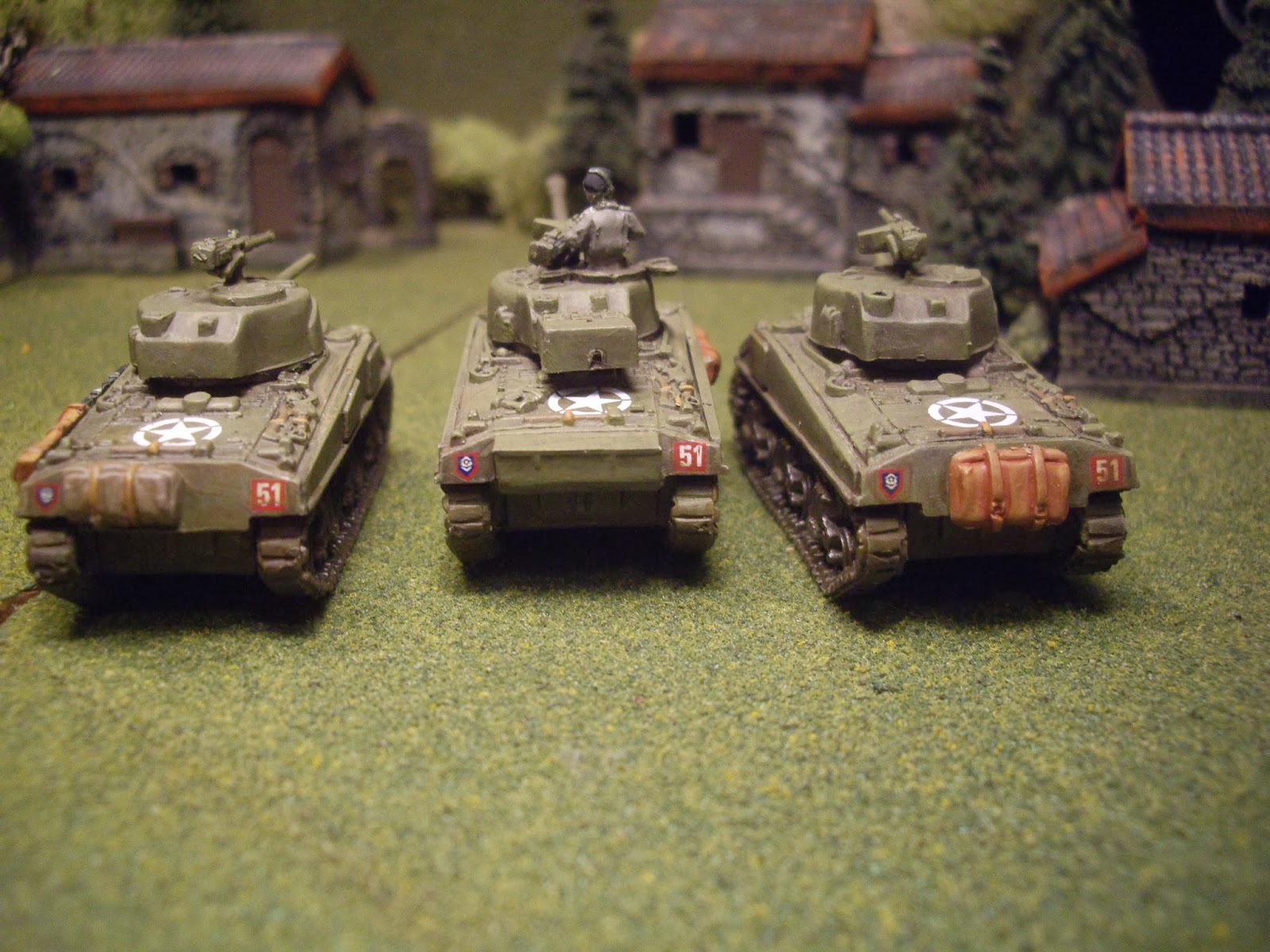 Giant hole in the back of the Firefly's turret that I didn't notice until just now. Grr.  Will have to go back and fill that in. 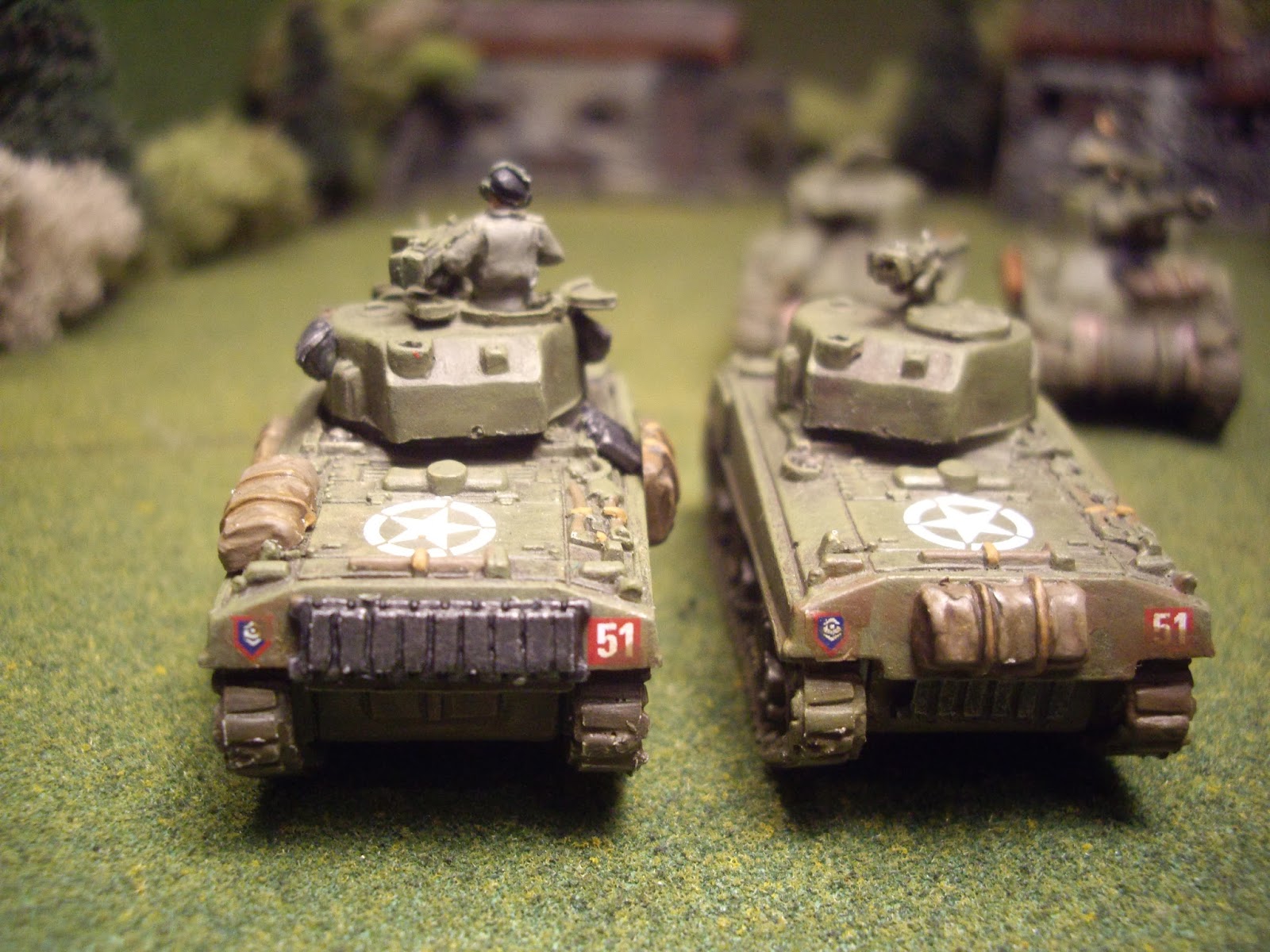 The decals look pretty good once you slop them up with 'mud' and when they don't catch the light in the wrong way.

So the compulsory units of my British armoured company were assembled.  I had a bare minimum HQ platoon, and 2 bare minimum combat platoons, and already it added up to 545 points out of 600 points.  What can you buy with 55 points in Flames of War?  Not much.  The one thing could do was to outfit all my tanks with AA Machine guns at 5 pts each. Good for fending off wandering Stukas, and, perhaps just as important, I think they look cool.  So that's 585 points.  Next:  German Grenadiers.  Right after I finish my Oldhammer Gobbo stickas. 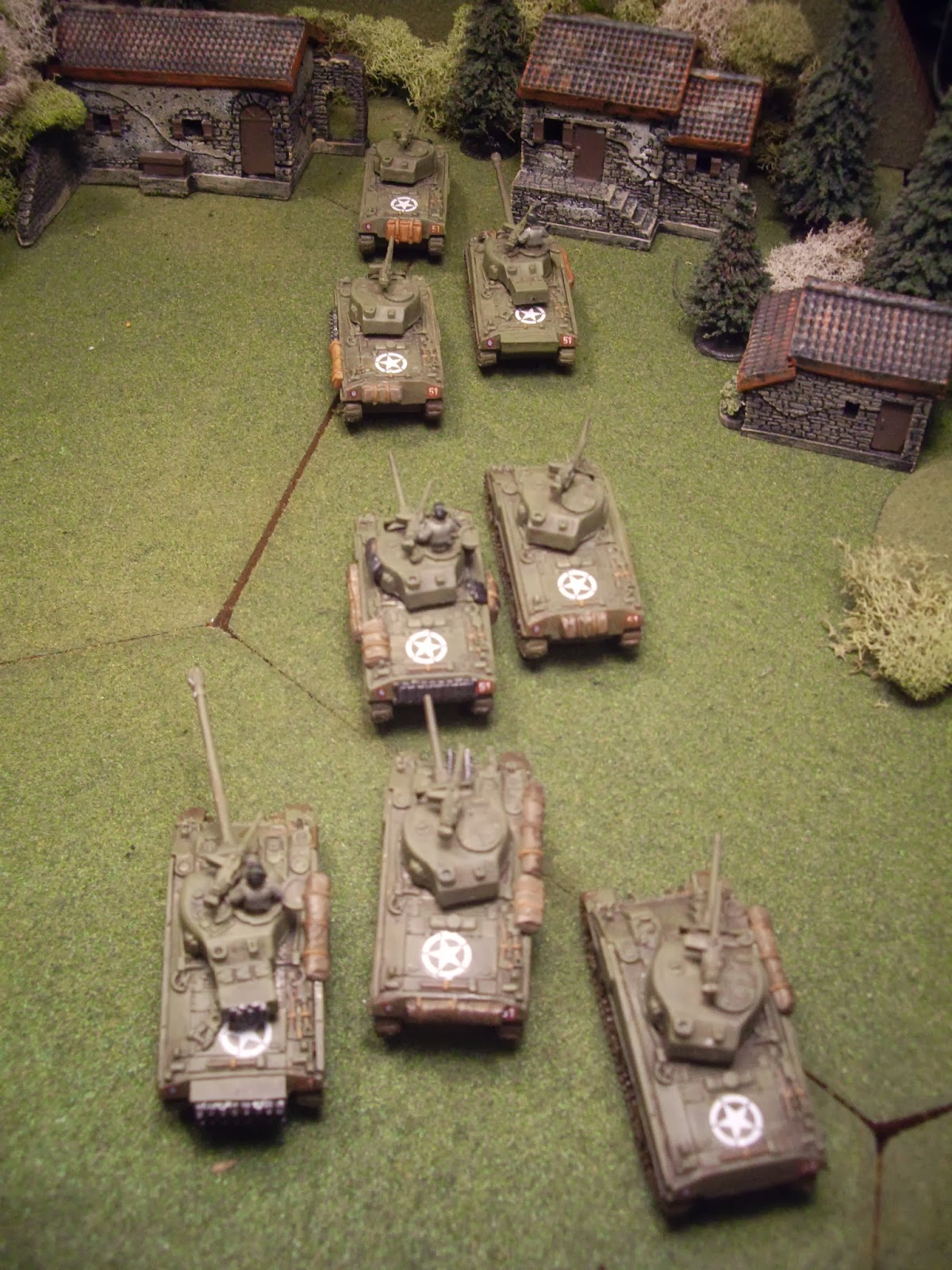 "Oh...Bluddy Hell.  Men, we've come the wrong way.  Turn around, objective's back that way.  Christ, are we ever going to get out of this bocage country?" 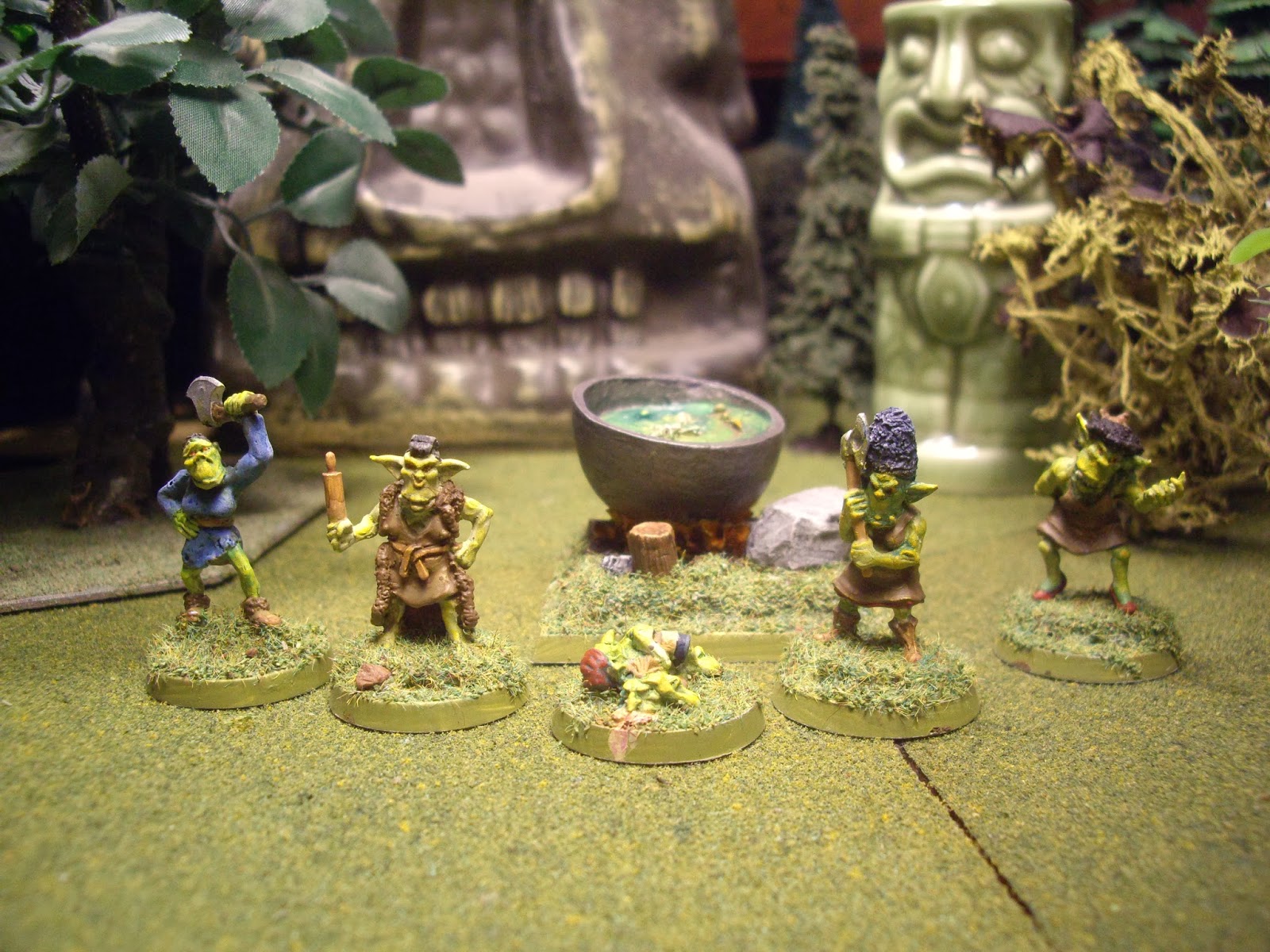 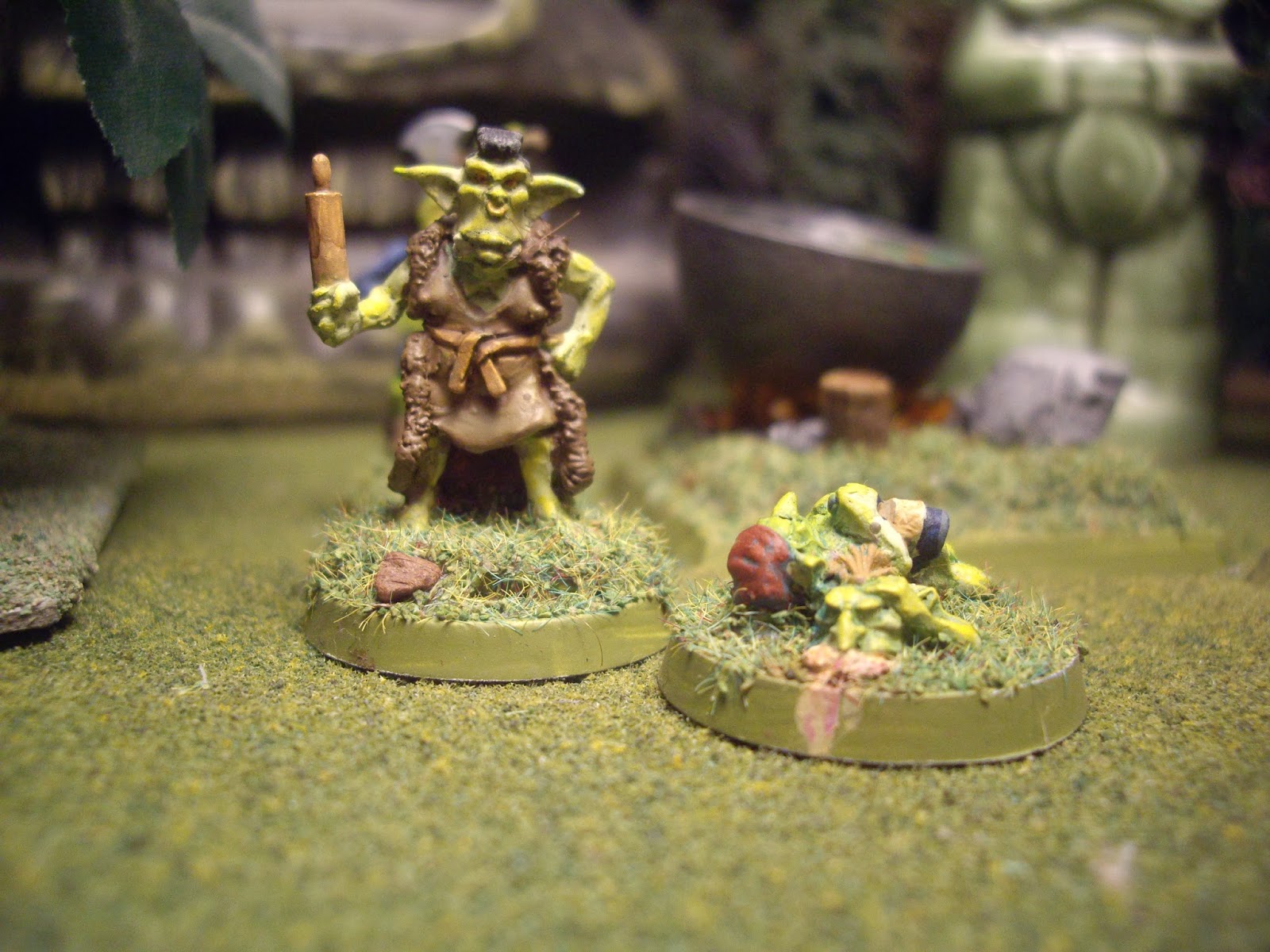 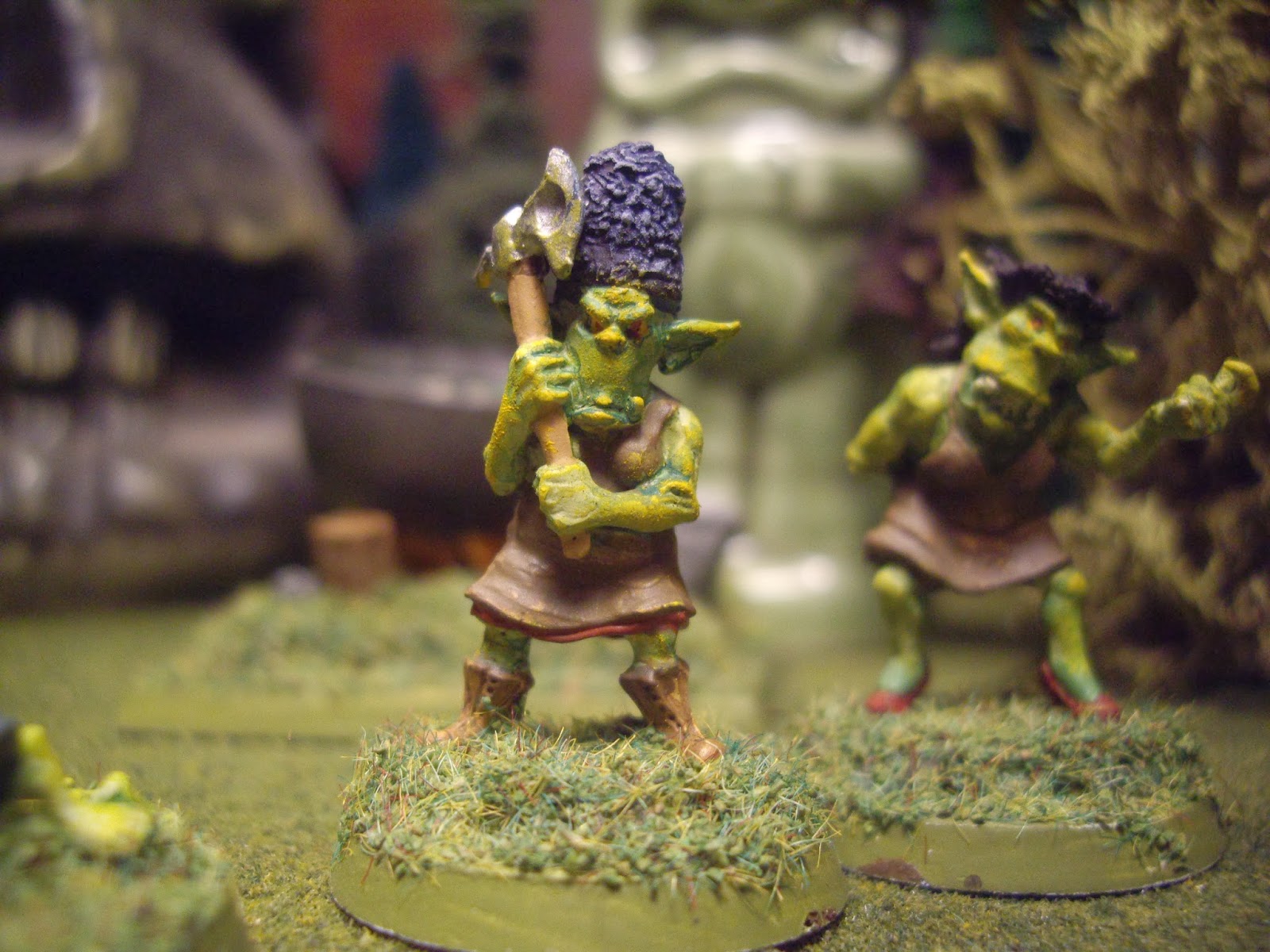 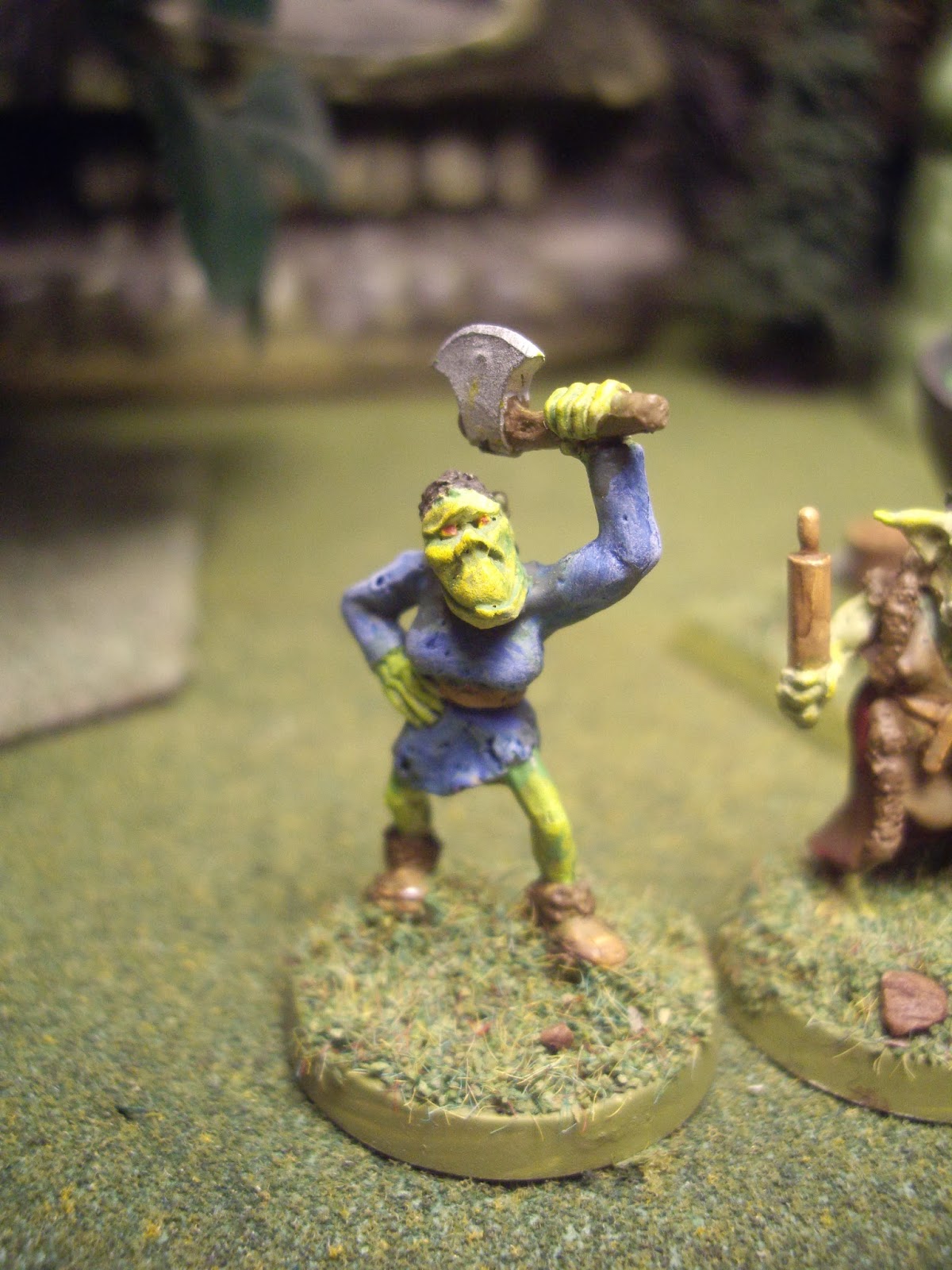 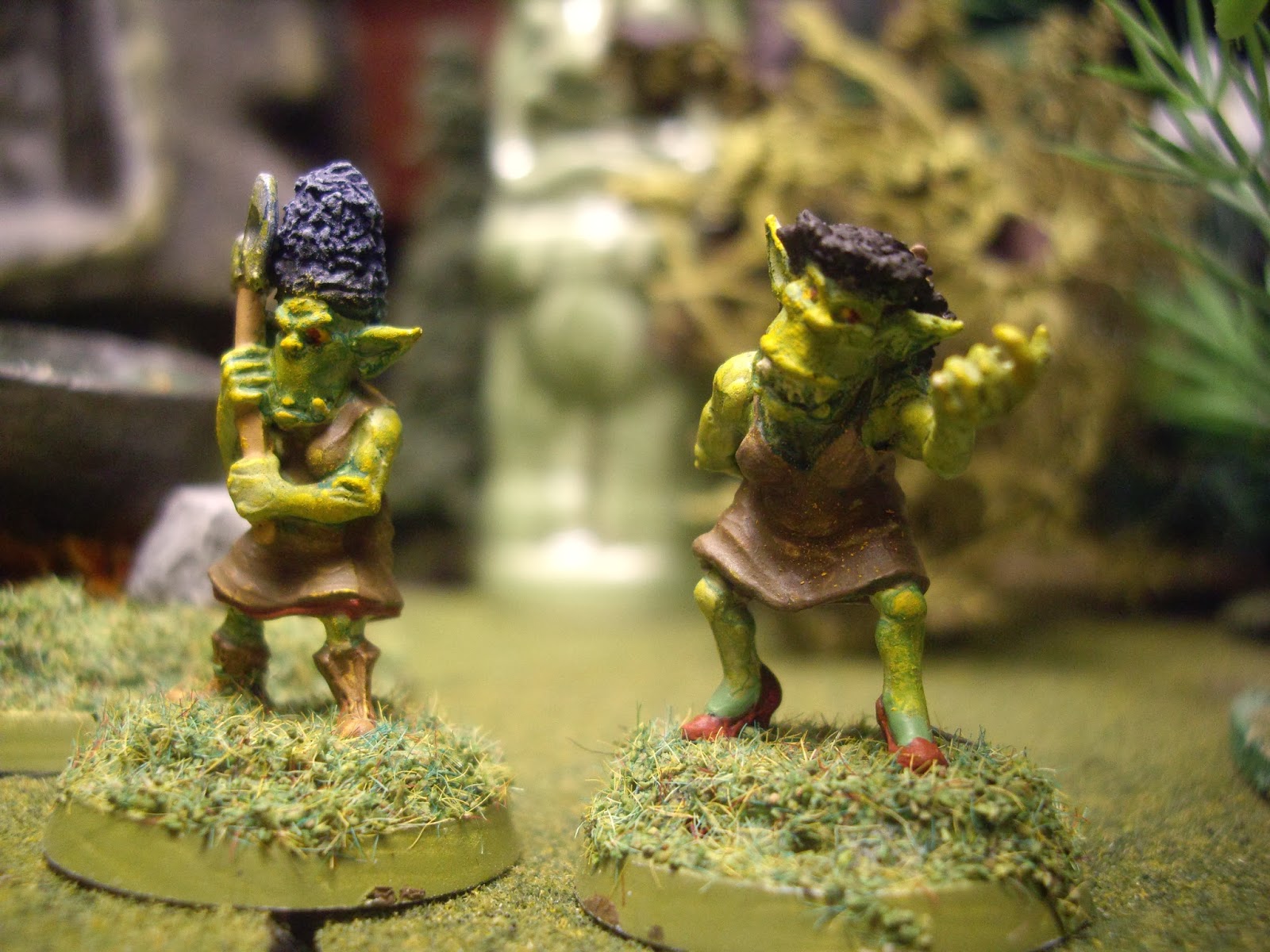 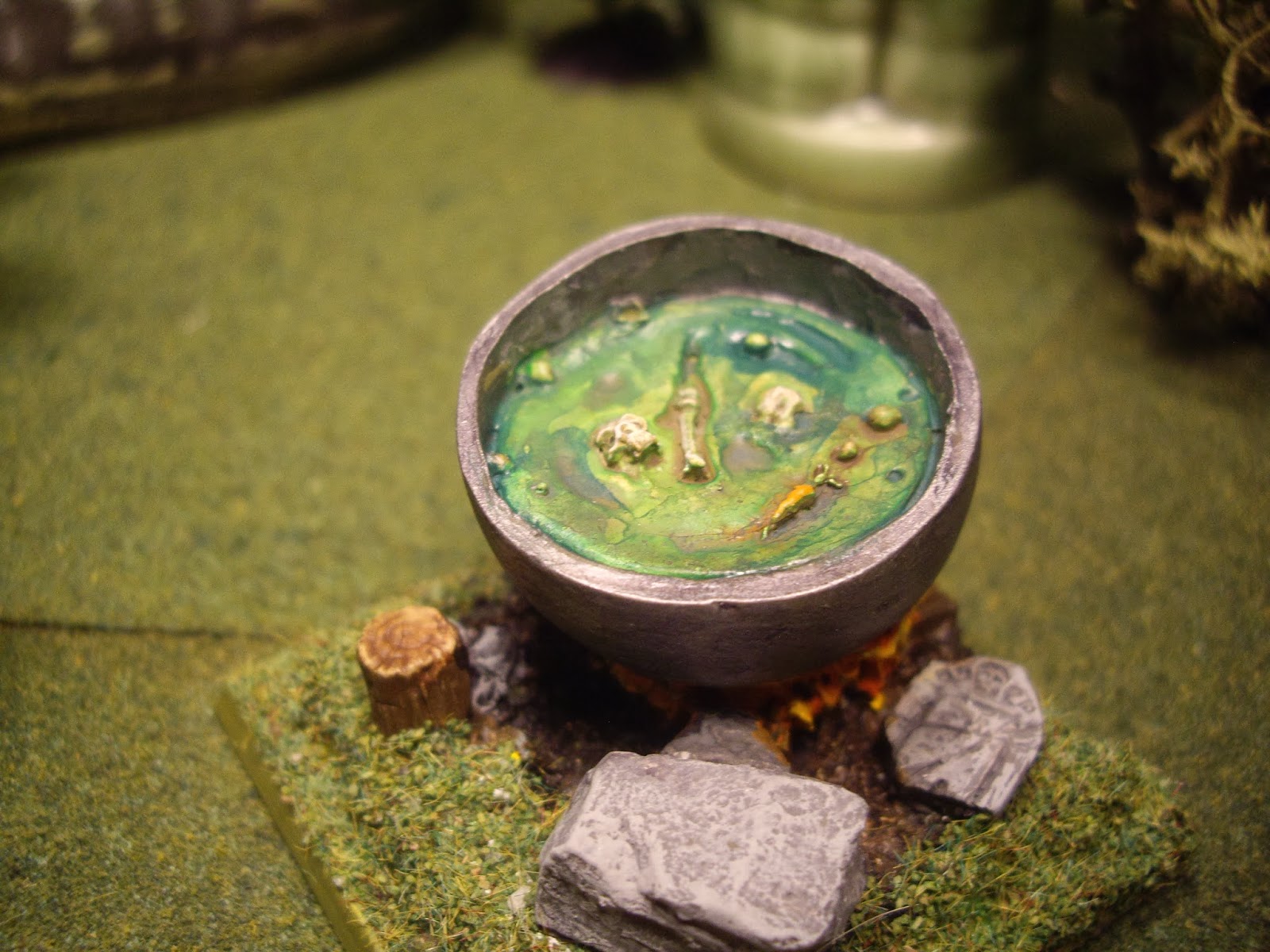 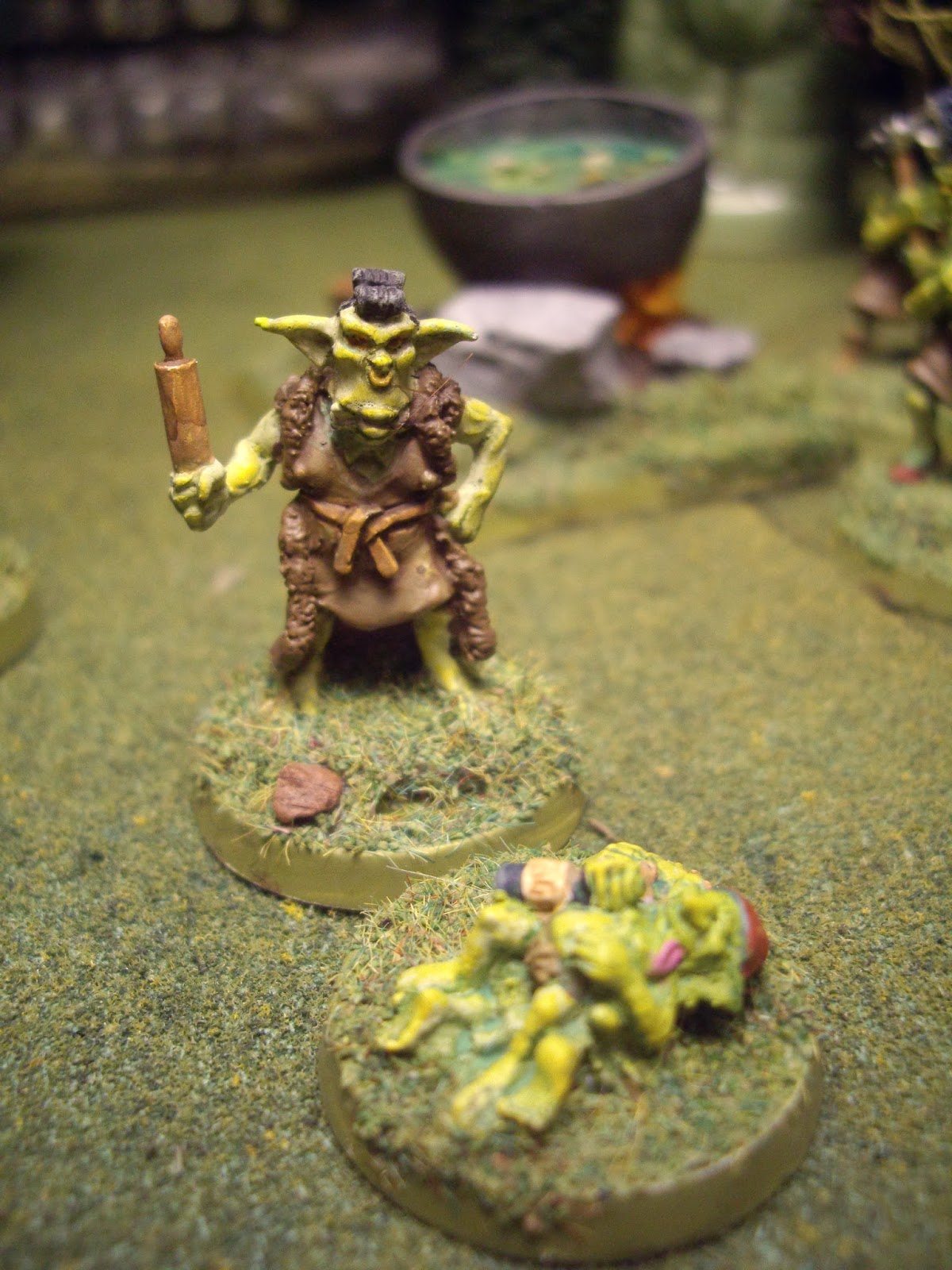 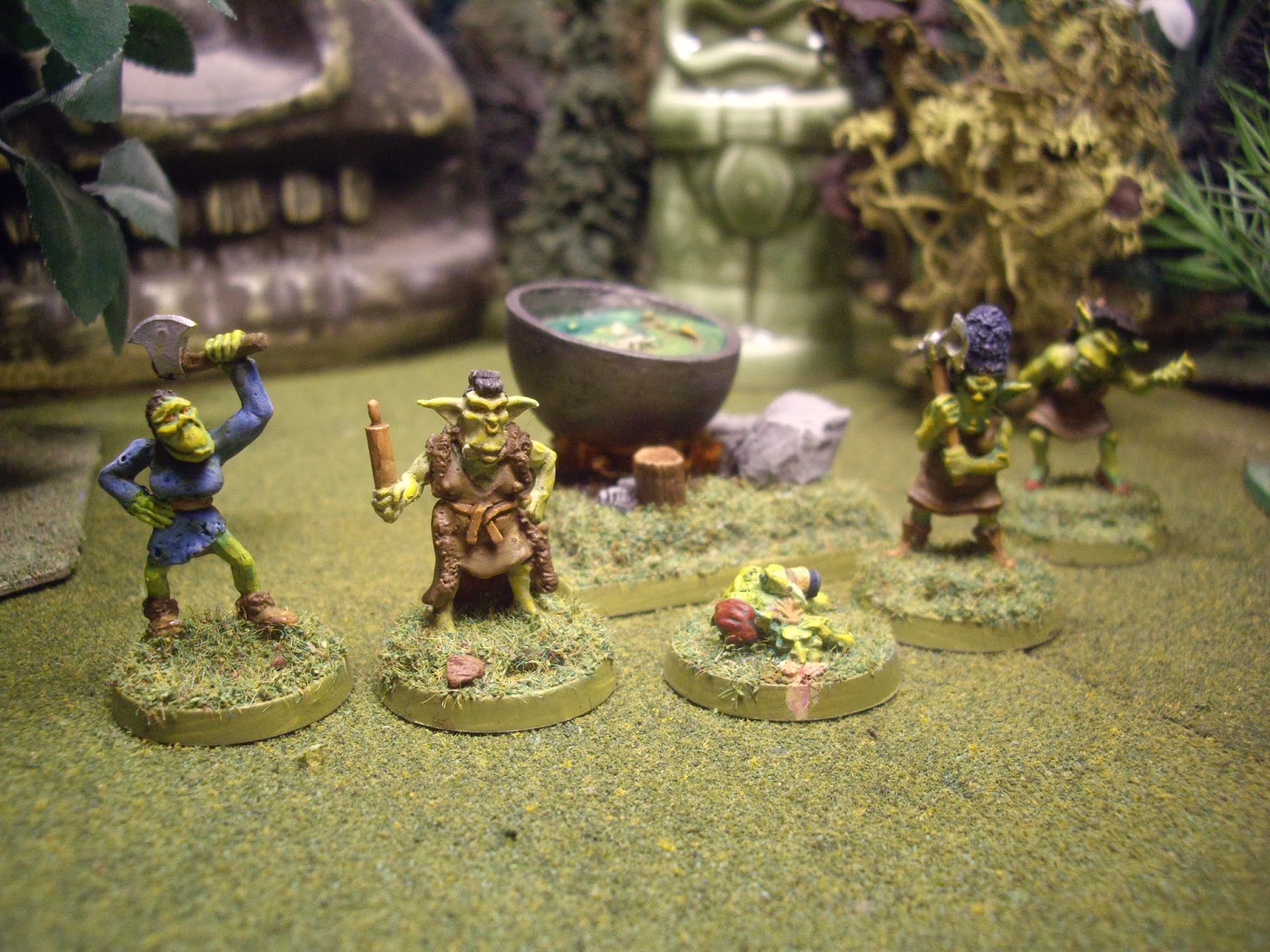 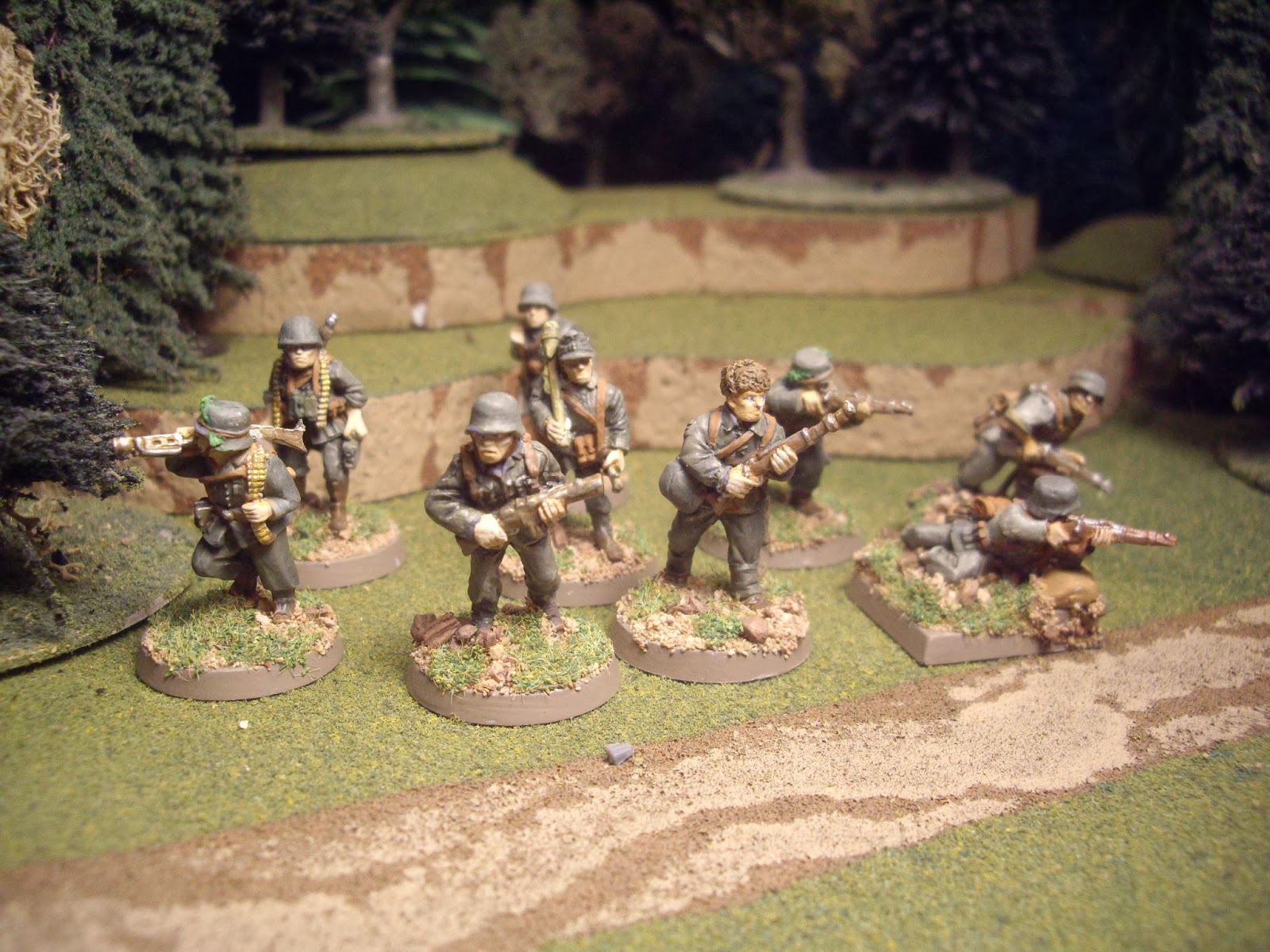 Jackbooted fascist thugs come to oppress the workers and farmers of Mother Russia?  Latter day Teutonic Knights determined to spread the gospel of National Socialism throughout the world?  Hm.  Probably more like nine alarmingly normal guys who just want to live long enough to get back to their home towns in Saxony, assuming those towns still exist.  No matter.  Corporal Steiger is determined to get as many of them home as possible.  That's the only thing he cares about...when, in certain rare moments, he finds that he is still capable of caring about anything. 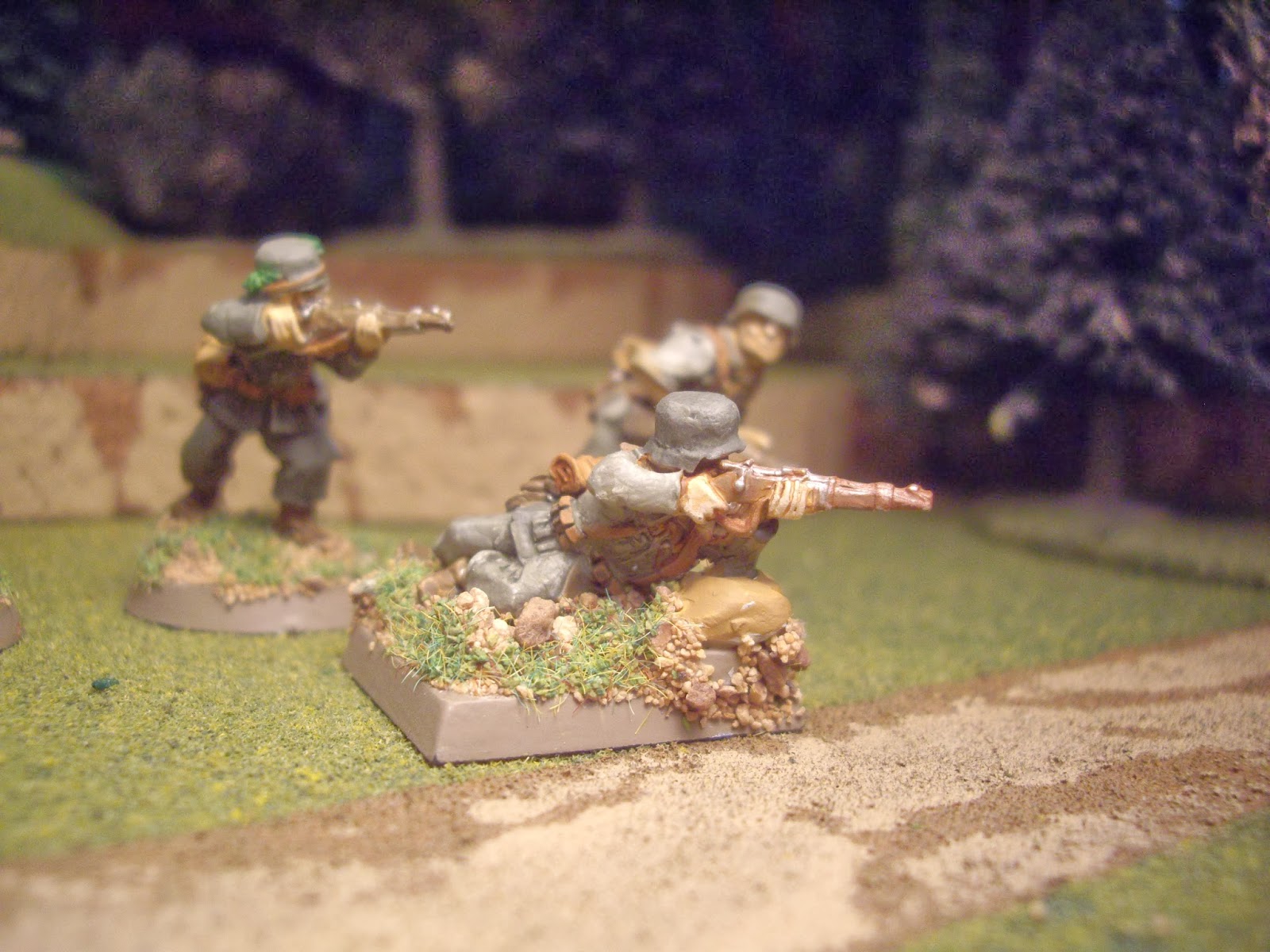 In the blackness of a Courland forest night, the squad falls back to yet another defensive position.  Lars, Lothar and Fritz pull security as their comrades make a dash across a forest path. 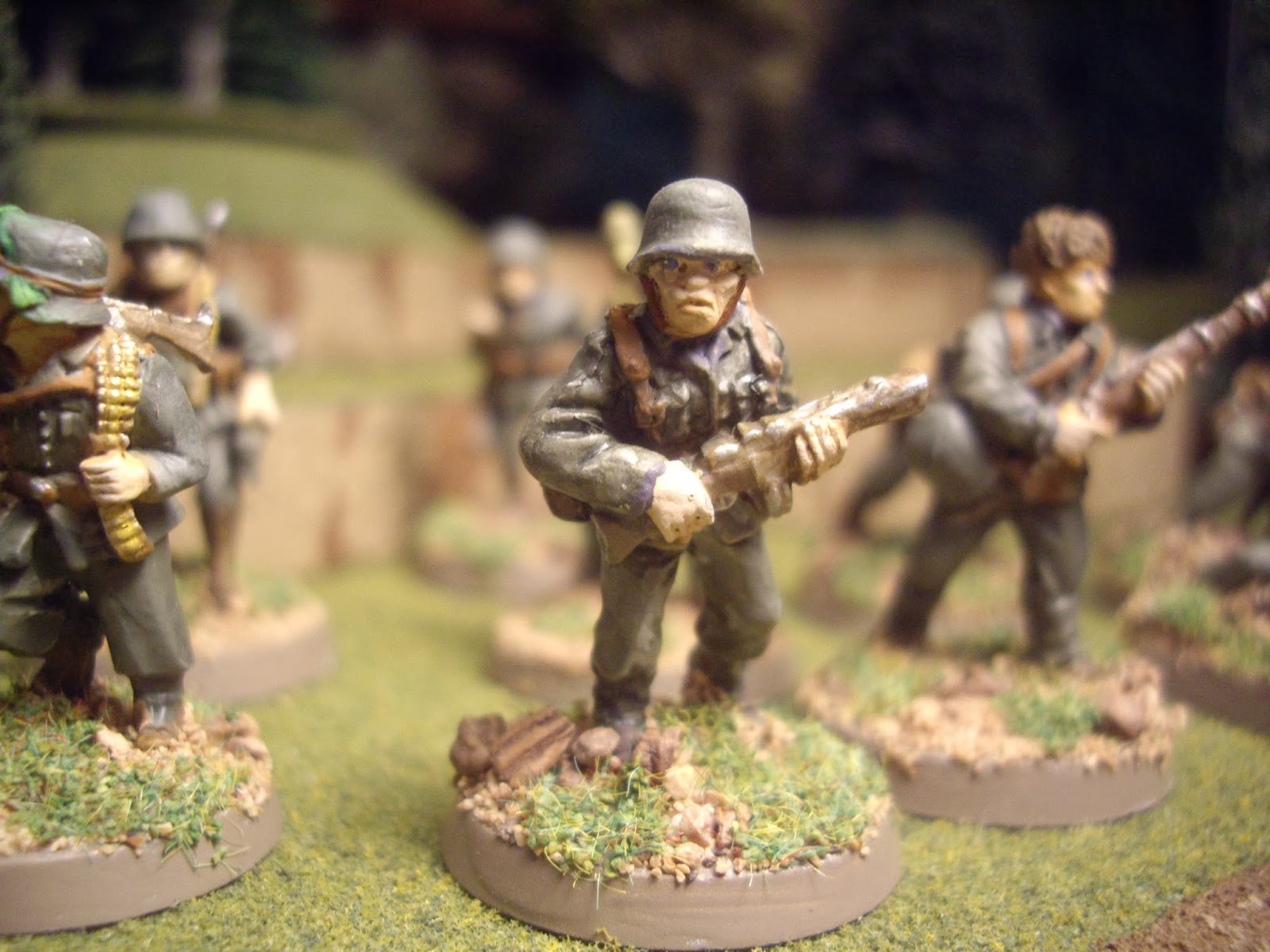 Along with Corporal Steiger, Heinrich here is one of the 'Old Gang' in the second platoon...which means he's survived over a year of combat on the Eastern front.  He's never quite recovered from the winter of '42, though, and always stays bundled up, even in the middle of summer.  Even in severe heat, he's always complaining that he just can't seem to get warm and stay that way... 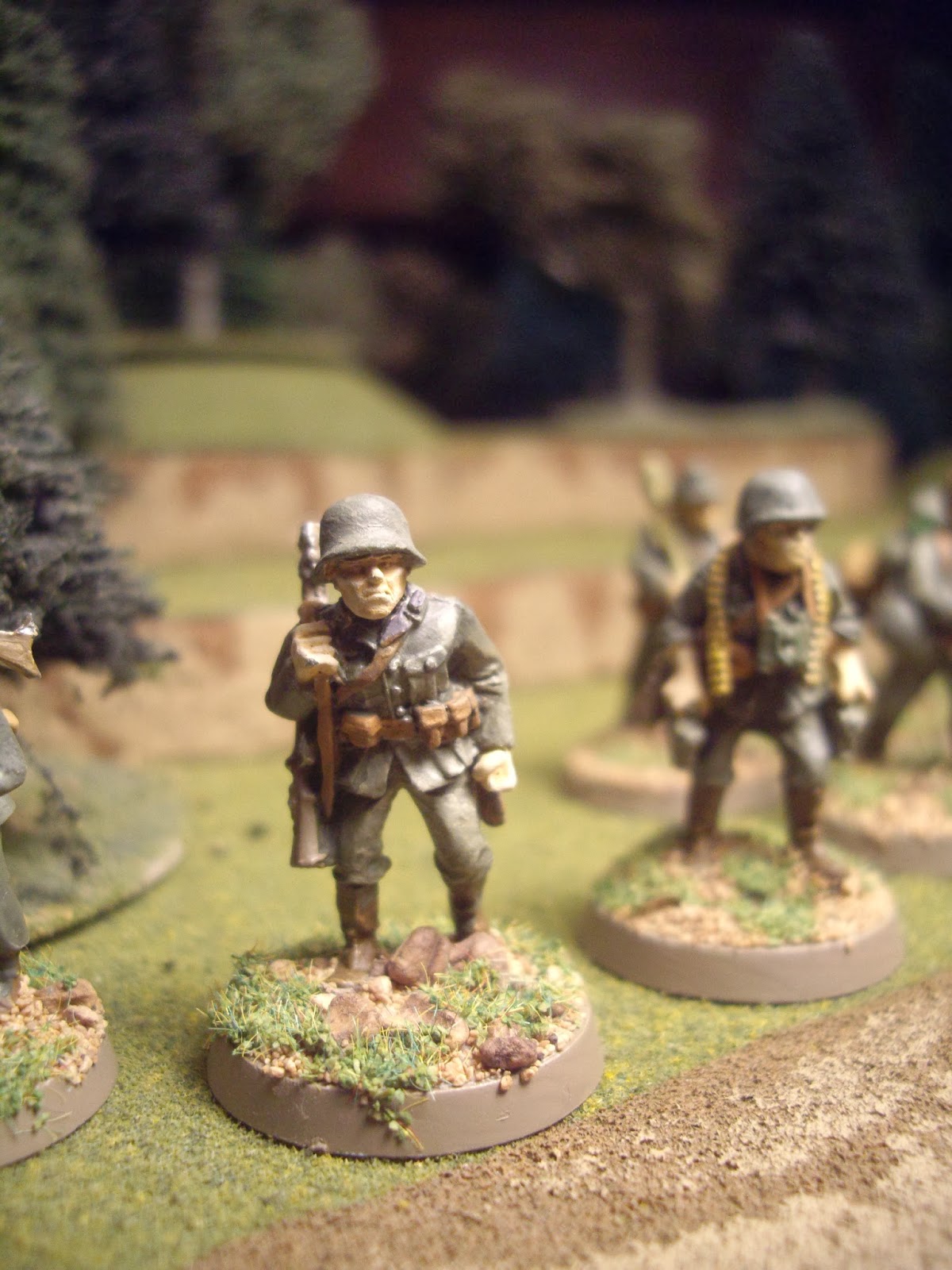 The new guy.  Nobody has bothered to learn his name...they all know he won't last long.  I mean, look at him!  Doesn't even have his weapon at the ready. 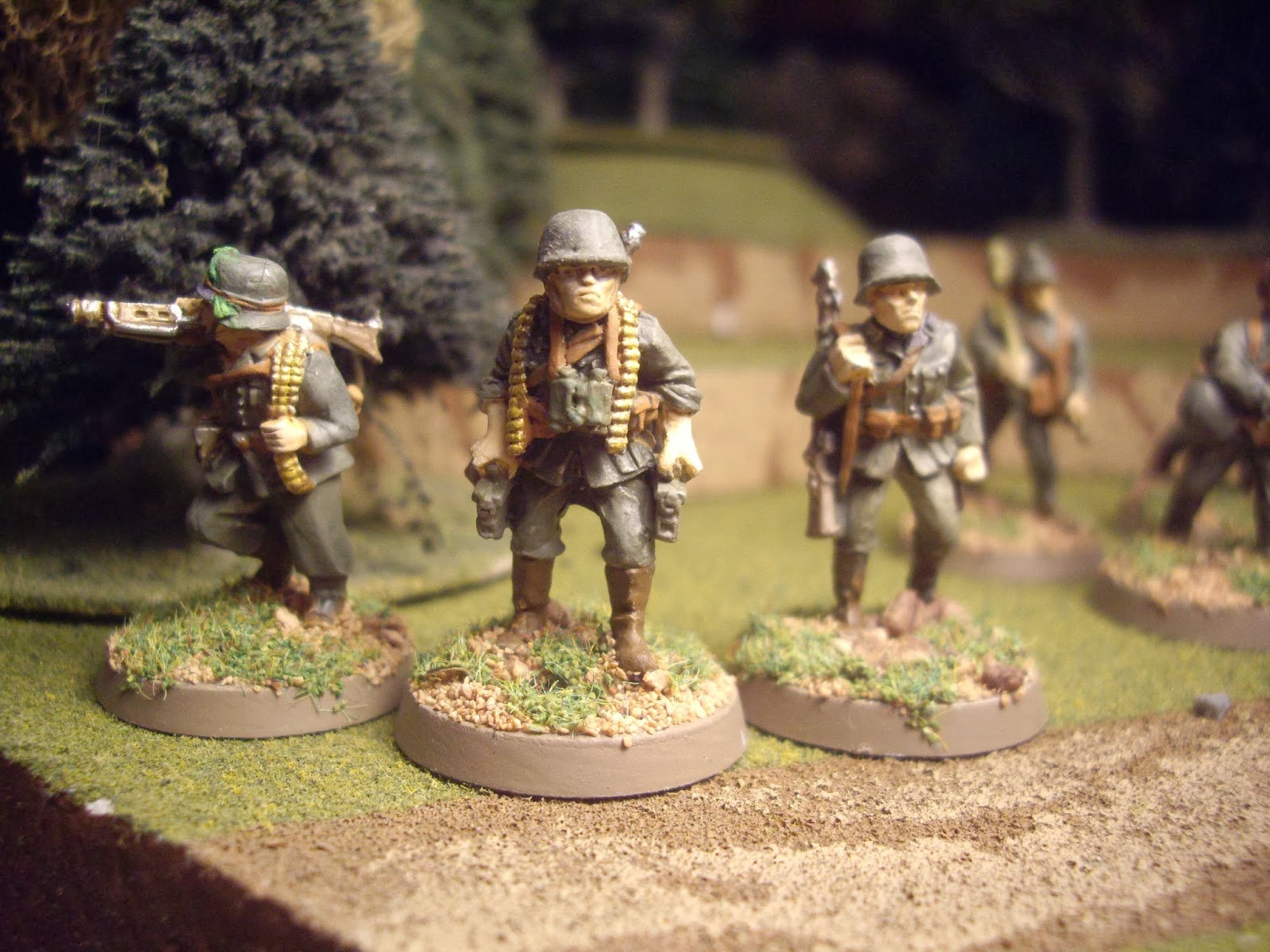 The gun team.  The machine gun is the heart of the squad's combat power, and is affectionately known to the kameraden as 'Greedy Gretchin"  Hey, new guy, keep up, will ya?  Still got that extra ammo or have you fucking lost it already?" 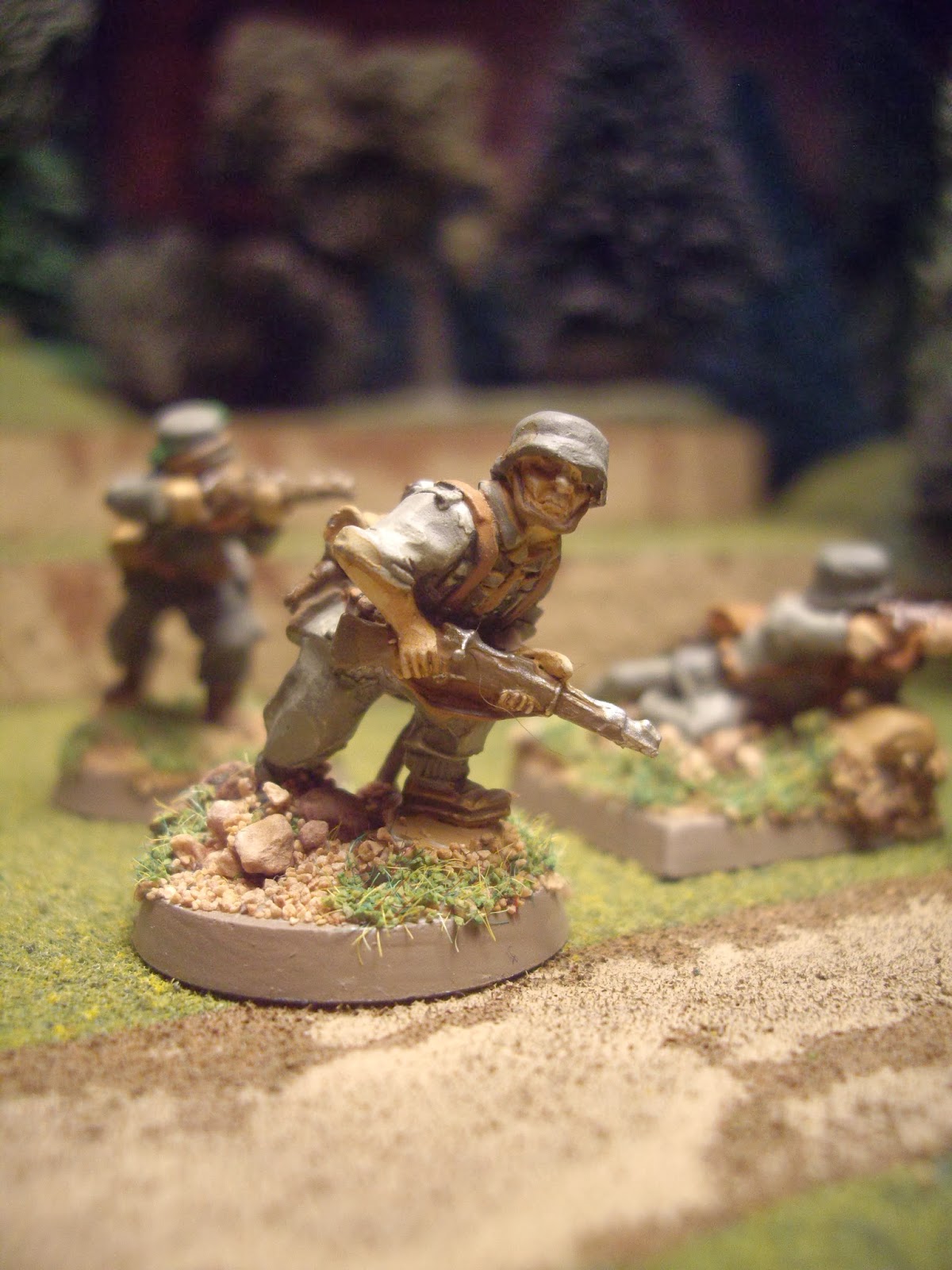 With most of the squad safely across the track, Fritz prepares to make his own move. 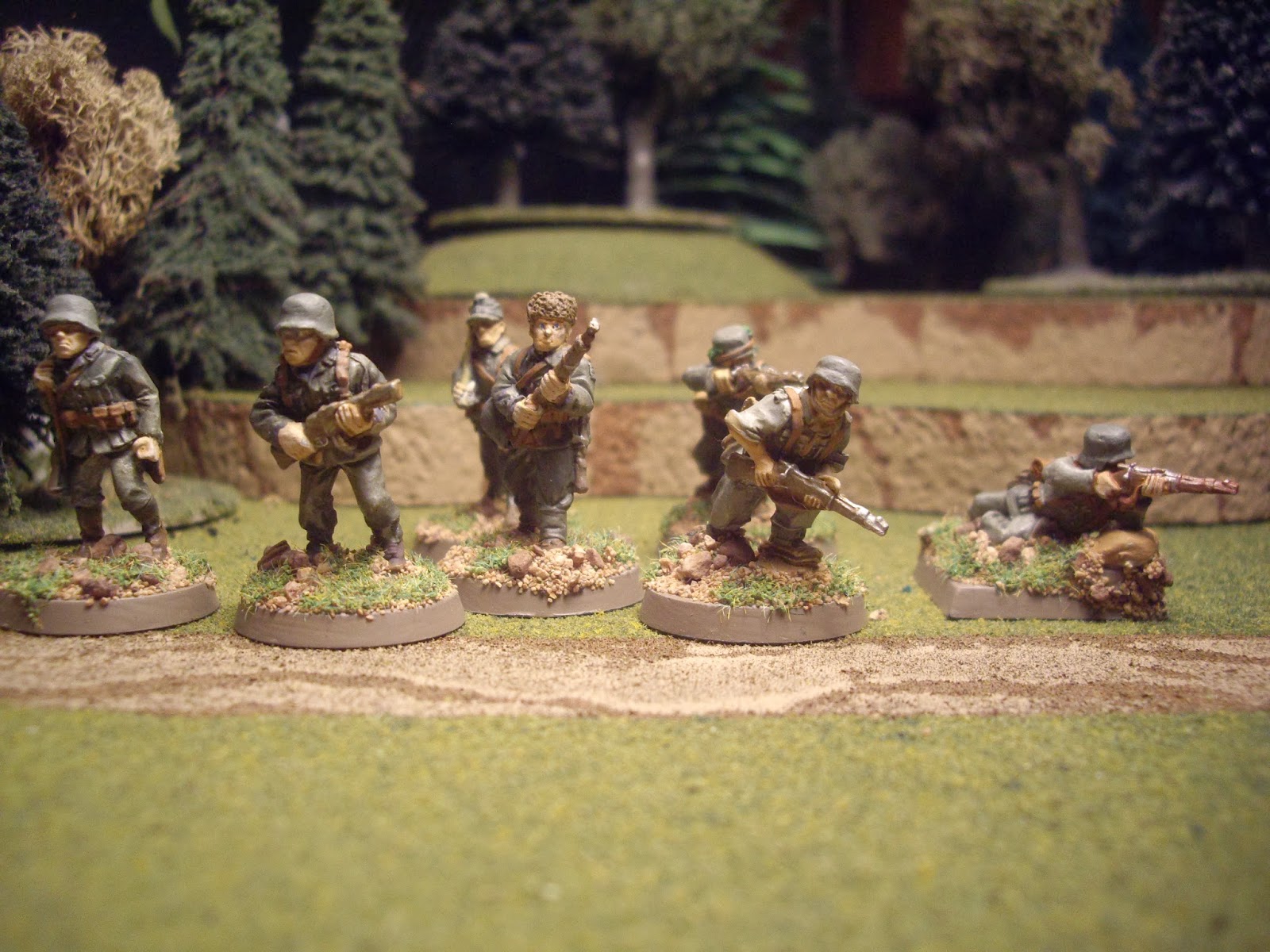