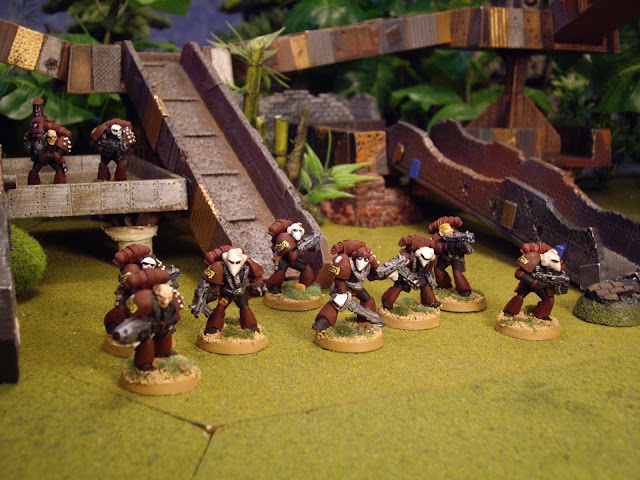 Excellency:
Please find here another set of data faxes showing images of 4th Company Marines of the Dead Men Space Marines Chapter.  These particular images were captured during the aftermath of the second 'Stealer war, and show a squad of marines clearing a ruined settlement on Geminion Secundus. 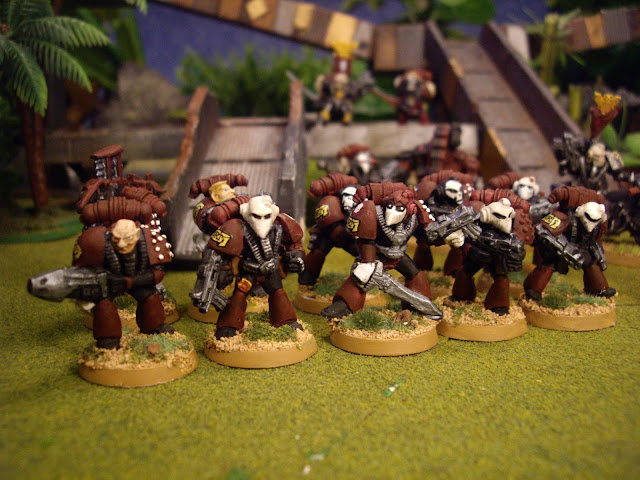 In the wake of the second, or 'Great' 'Stealer war, as it is sometimes known, a great deal of  'mopping up' was required, especially in the ancient ruins and abandoned settlements which the broken remnants of the Genestealer Cults and their despicable allies favoured as refuges.  Here our squad reassembles after having successfully reconnoitered  the ruined facility.  Follow-on forces can be seen moving in behind them. 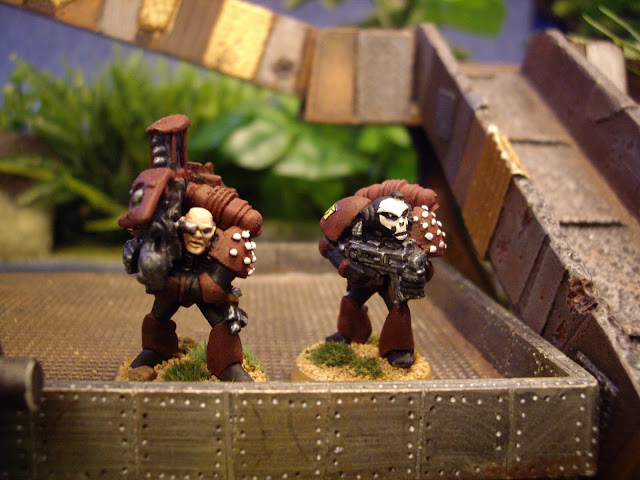 During the initial advance a missile launcher armed marine and his battle brother over-watch their brethren.  Again we see here the stylized skull motif favoured by many Dead Men painted roughly on one marine's helmet.

Another view of the missile launcher armed marine.  The shoulder scroll bearing the motto 'Mort' clearly identifies him as a Marine of the fourth company. 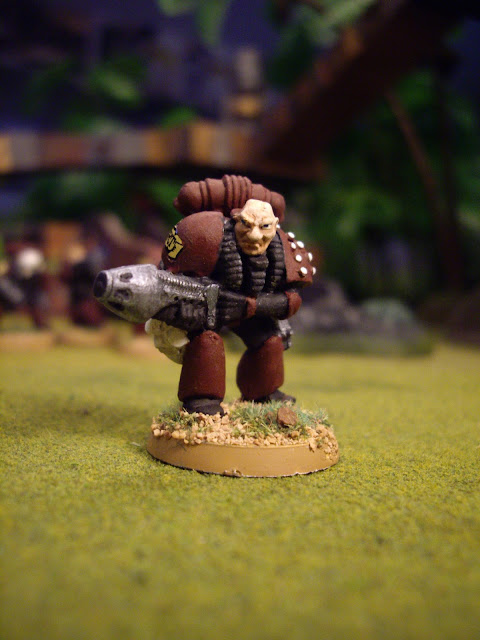 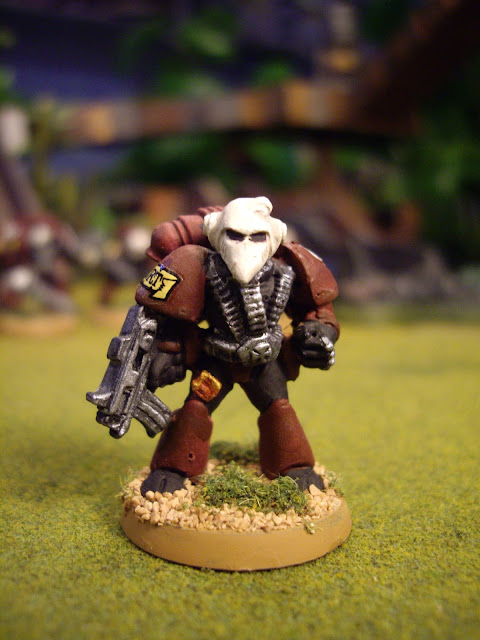 A decorated battle brother, most likely a corporal/assistant squad leader...he has seen his share of action recently, as is evidenced by the traces of what appears to be melta-weapon damage to the lower rim of an improvised left shoulder plate and the bullet-hole near the bottom of his right greave. 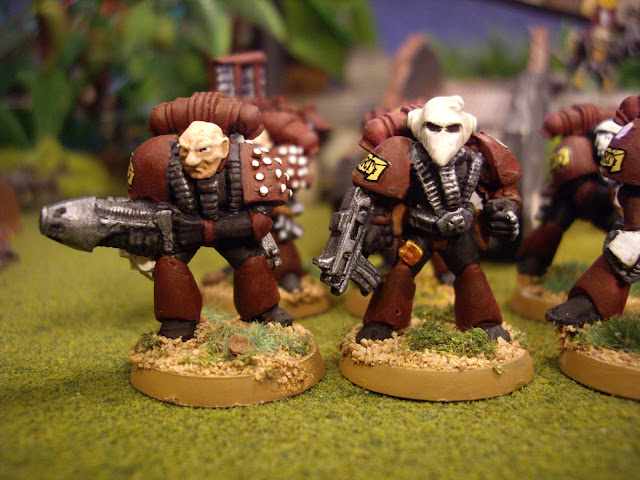 Another data image featuring the plasma gunner and the 'corporal'.  Note the 'iron knuckles' worn on the corporal's left hand, held in an even greater readiness than the bolt gun, as if they are the Marine's preferred weapon.  It was men like this who won the Second 'Stealer war. 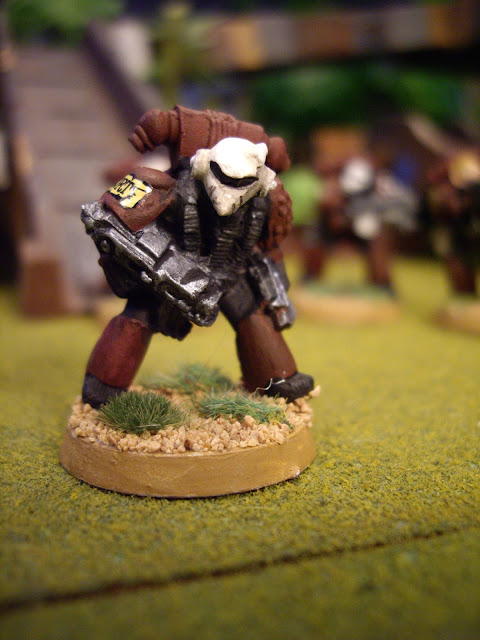 Interesting image of another battle brother advancing to his next position.  Note the bolt pistol held in readiness in addition to the bolt gun. 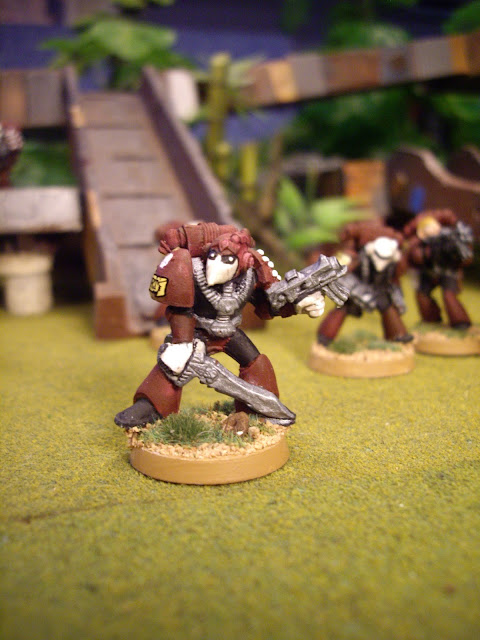 The Squad Leader.  Note that he wears no obvious recognized mark of rank, as seems to be so typical with the Dead Men.  Alone amoung his squad, however, he does wear a skull marking, barely discernible in this photo, above the 'Mort' scroll on his right shoulder.  Such devices often denote leaders amoung the Dead Men, although there seems to be no clearly defined ranking system. 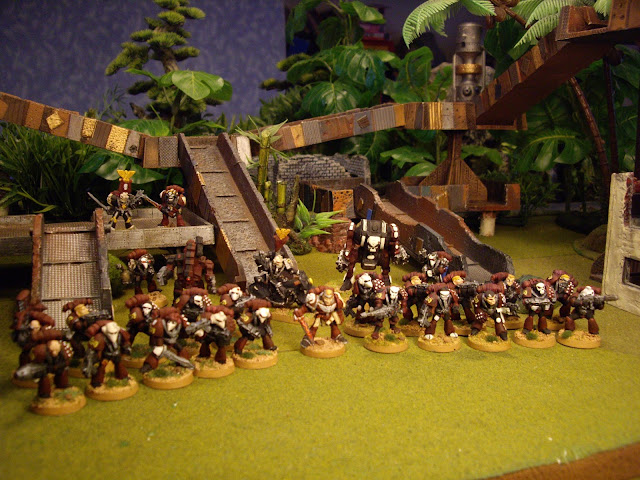 The final photo in this sequence, showing the battle group reassembling in preparation for their follow-on mission.  Visible are two tactical squads, two chaplains, two librarians, a dreadnought, a robot and two tech marines.  Small but formidable groups like this were often primary maneuver elements in fighting the 'micro scale' combats of the Genestealer wars, where enemy forces were typically dispersed over wide areas and used rugged terrain or the local populations to secret themselves.  I am currently assembling more information on the historical background, customs and beliefs of the Dead Men  Space Marines for you, I would have included some of it here, but my electro-stylus is giving trouble, so I will include it with my next chapter, which will touch upon the Terminator squads of the Dead Men Chapter. 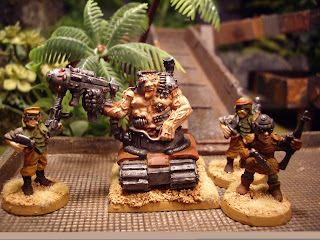 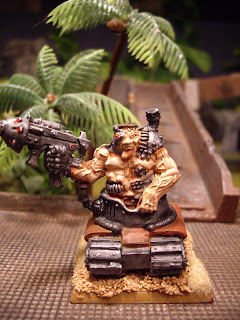 His Imperial creators were taken very much offguard by the extent of their own success but did not live long enough to regret it.  K'Lurg carved his way out of the facility before the anesthetic wore off and escaped into the surrounding jungle of the death world of Proteus. 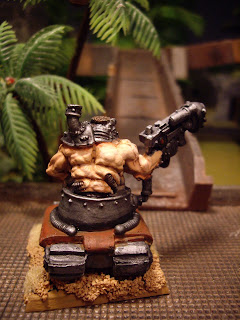 The death world was no more ready for K'Lurg than the Imperial facility had been.  The cybernetically enhanced Ogryn soon fought his way back out of the jungle and onto a space ship with which he embarked on a career of piracy . 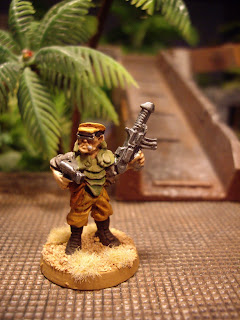 K'Lurg soon earned such an appallingly villainous reputation that the worst scum the Wailing Reach had to offer flocking to his banner.  For decades the renegade Ogryn terrorized the space lanes.  He became a major thorn in the side of The Dead Men space marines chapter, who were forced to devote ever increasing resources to the campaign to extirpate K'Lurg and his band of criminals. 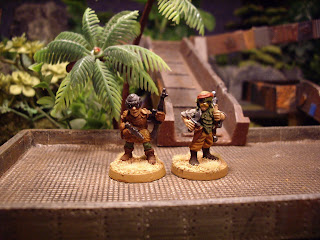 Over several decades the Dead Men had several near successes in killing K'Lurg.  They poisoned him, shot him, Las-cannoned him, and destroyed a dam in order to flood a small valley on the planet Nepenthe which happened to have K'Lurg holed up at the bottom of it.  K'Lurg always survived.  The Dead Men justifiably believed they had finally succeeded in finishing their formidable foe when Captain Callixx of the 4th company severed K'Lurg's legs with a 2 handed chainsword in a desperate fight aboard K'Lurg's flagship, The Hungry Whore, then flushed the legless Ogryn out an airlock into space. Yet K'Lurg survived somehow, and was back in action within a few weeks, having replaced his lower limbs with an armored tracked chassis, and with his career goals re-oriented away from piracy and toward killing Dead Men.  It is thought that K'Lurg did in fact meet his final end when he was lured into a cottage on Ran by Chaplain. William Pil Grym and marines of the 6th company, who then called in artillery on said cottage, obliterating it with a direct hit from a one kiloton nuclear shell fired from a heavy howitzer.  No trace of K'Lurg's body was ever found, but thereafter K'Lurg's depredations permanently ceased. 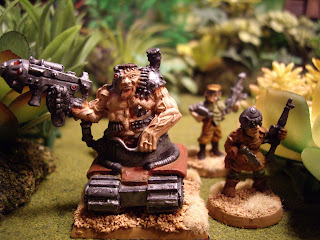 K'Lurg shown some time after his brush with Captain Callix aboard The Hungry Whore, with his preferred personal weapon, a heavy beamer, and the armored tracked chassis he loved to use to grind close combat opponents to bloody pulp. 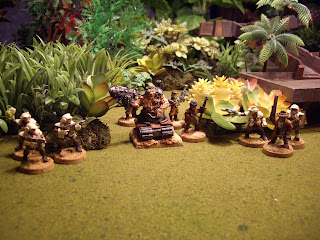 Ambush!  Famed bounty hunter Rufus Kraal, supported by hand-picked troopers of the 24th Geminions Imperial Guard Regiment, attempts to take K'Lurg by surprise.  Rufus barely escaped with his life.  None of his loyal guardsmen were as lucky.