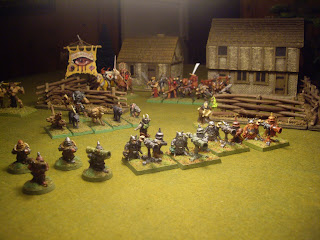 Limping. shuffling, hopping and stinking they come from out of the squalid streets of Lost Veguzz...porting their weird weapons and contraptions of war, bent on carnage and destruction...the Chaos Dwarfs! 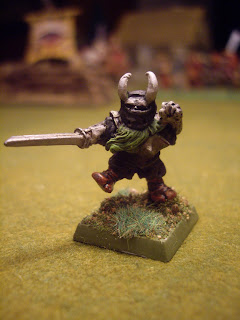 Amoung their ranks, prancing and capering as he directs the steams of hot steel and liquid flame onto their tagets is the infamous Chaos Dwarf engineer Ukko Fartblast!  Horribly mutated and utterly insane, Ukko commands all the war engines of the Chaos Dwarfs of Lost Veguzz.  Many enemies have laid handsome bounties upon Ukko's bony head, but no one has caught him yet. 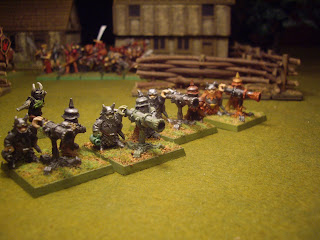 Ukko's dreaded swivel guns make up his main battle line in any fight.  The rules for Chaos Dwarf Swivel guns did not appear in Warhammer Armies.  They were first published in White Dwarf #108.  Orlygg has posted them here. 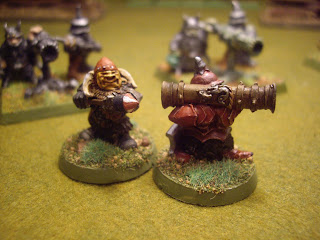 Here the gun line is supported by a brace of deadly bazukas... 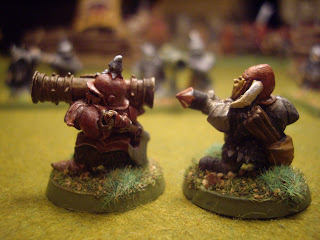 Their presence bodes ill for any enemy of the Chaos Lord Buzzgobb Phesterlick, Prince of the heinous city of Lost Veguzz! 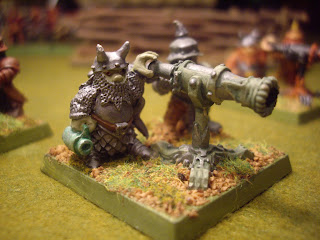 I started painting these guys when I was in Afghanistan the last time.  That's been over three years ago, now!  I wasn't happy with them at the time, so they went into a shoe box until fairly recently, when I decided to dig them out, dust them off and finish them as best I could. 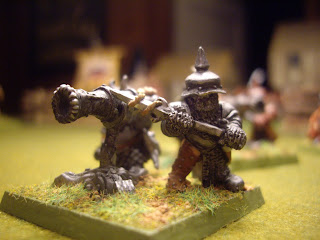 Things aren't always going to turn out looking just the way you want them to.  Just get 'em on the table! 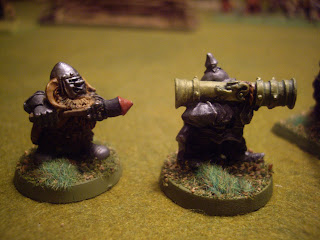 Rocket Launcher #2....I always liked the grimacing mask on the loader...looks a bit Samurai. 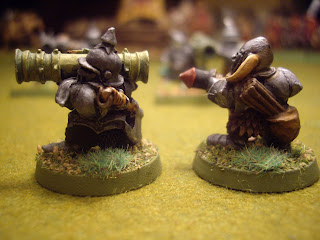 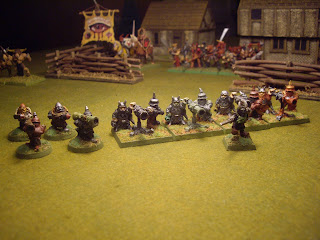 The whole group...I'm still missing the mortar, but I'm sure these guys will be able to raise plenty of Cain on their own!  Blood for the Blood God!
Posted by Mouse at 11:56 PM 4 comments: