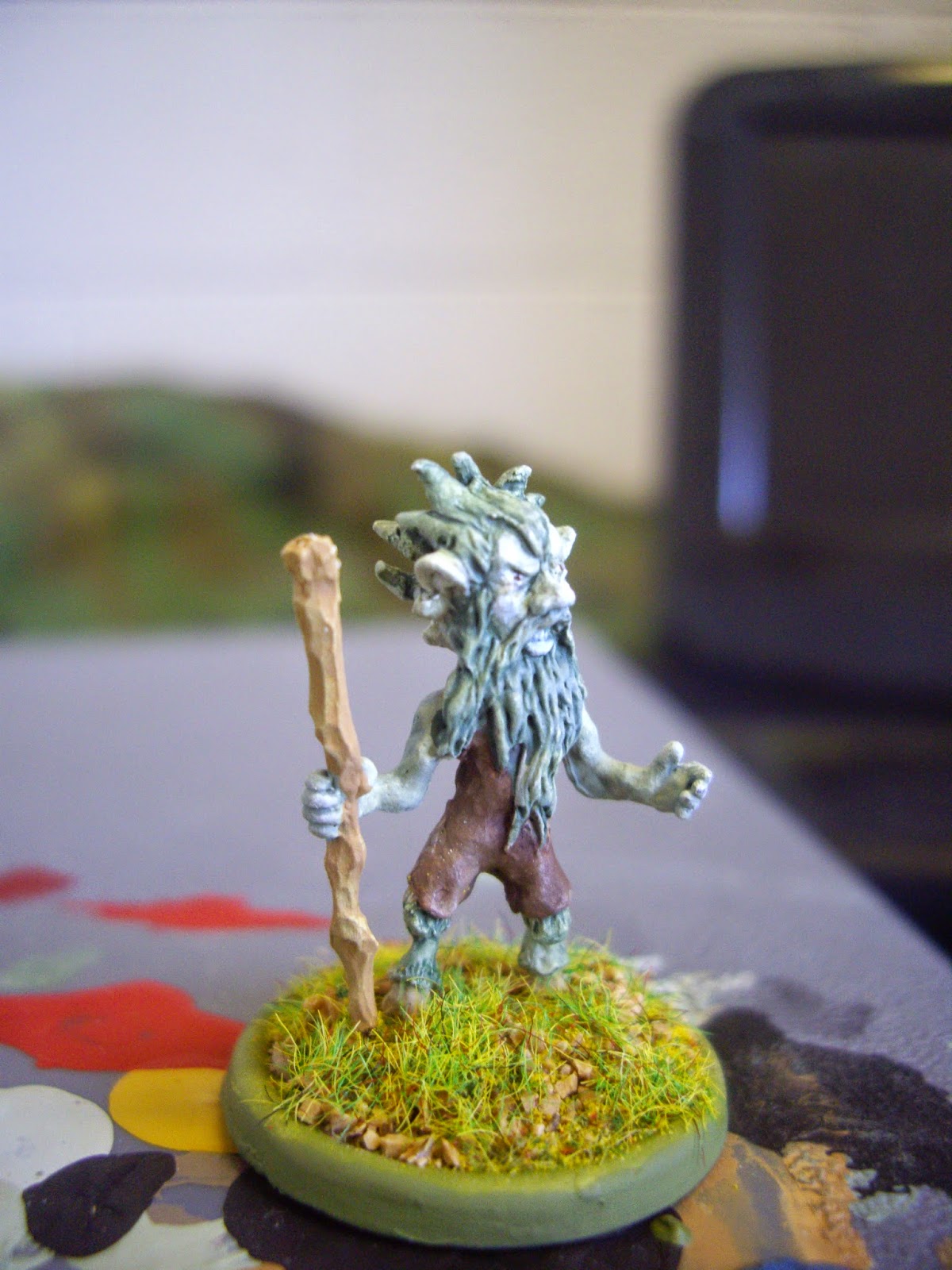 The Korred are part of that large family of mysterious and seldom seen creatures who inhabit many of those abandoned and time-worn dwelling places which are to be found throughout the Western lands.  Innumerable tales and legends surround the doings of these faerie folk.  Many believe them to be the last descendants of lost races whose civilizations were destroyed by the powers of chaos during the long and painful decline of the West. 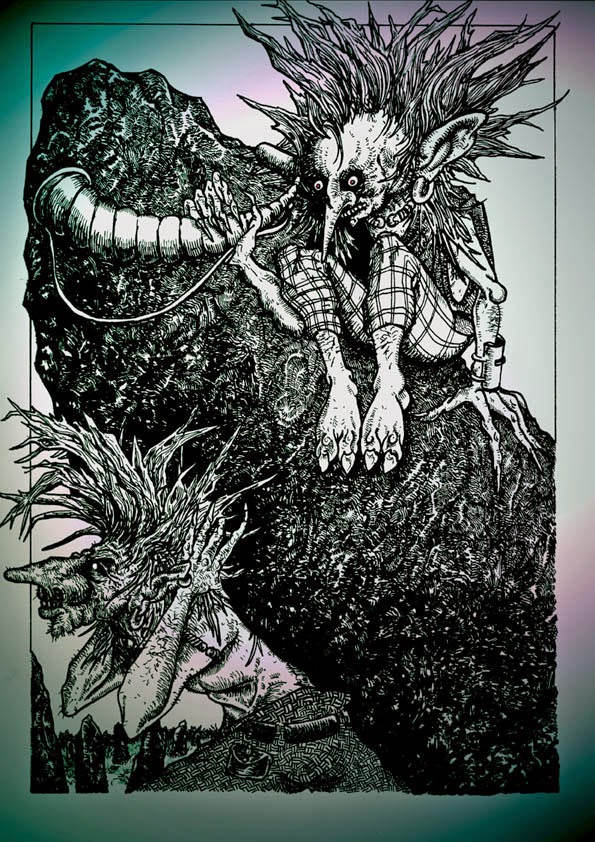 Whatever their origin, the Korred concern themselves now mainly with singing and dancing by moonlight, and with random acts of kindness as well as mischief.  The Korred can be helpful friends.  Many tales speak of their giving shelter to adventurers in lost caverns or tombs, casting spells to befuddle monsters and other enemies. or guiding a party through dangerous country. 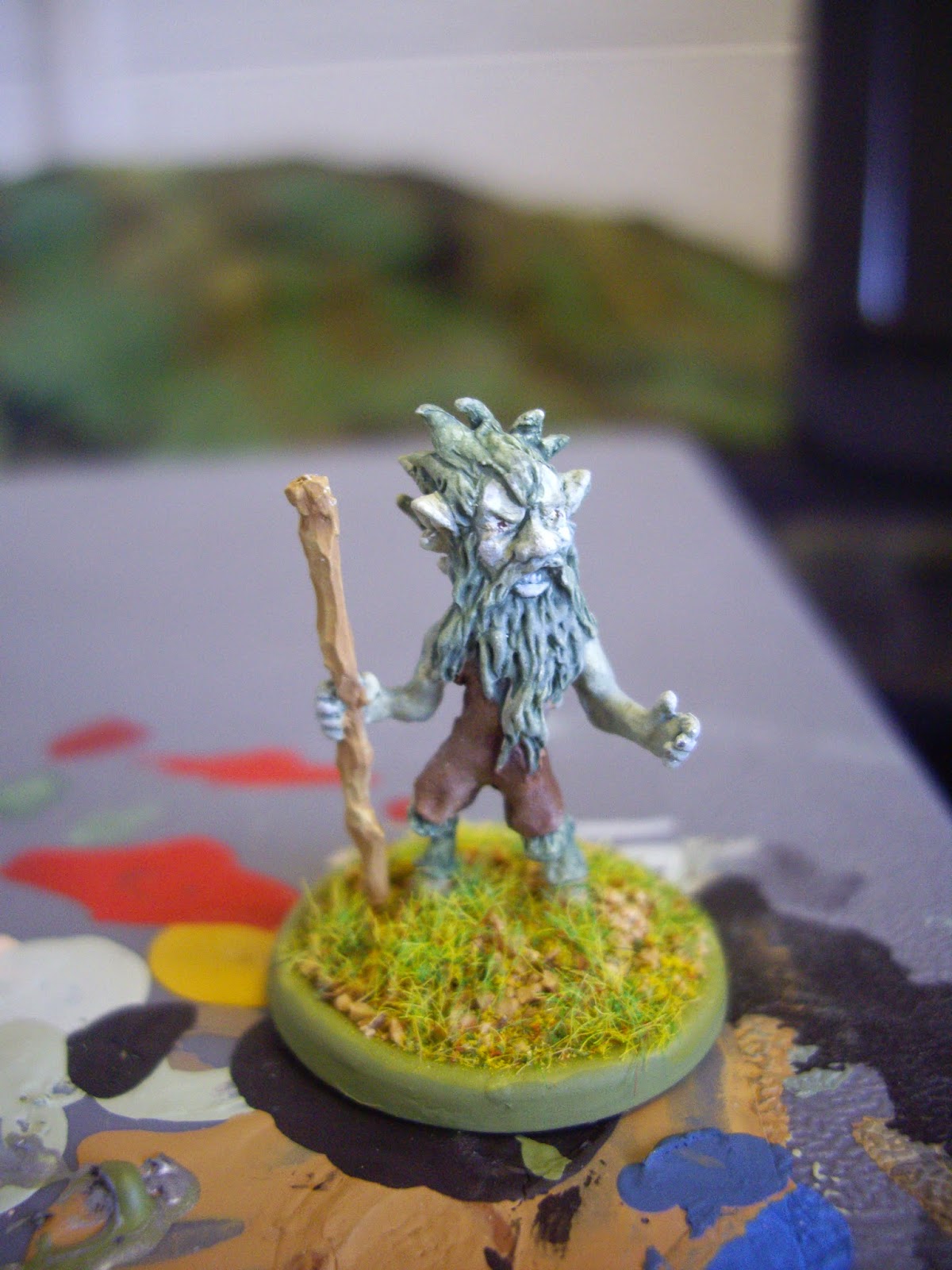 You will note that Mr. Korred is not standing on the Big Board.  This is because he is in Texas where my unit is having to spend 3 weeks decoupling from the Pentagonal Colossus.  It's the sort of thing that could easily be achieved in about 3 days, but it's the government, so everything takes seven times as long as it should.  I knew I'd have a lot of time on my hands while I was here, so I brought Mr. Korred and some other friends, mostly Rogue Trader types.  Well, I'm going to take Mr. Korred out for a sandwich.  Hope to check in tomorrow with a finished squad of space scum for my long-neglected Rogue Trader campaign. 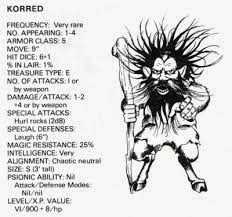 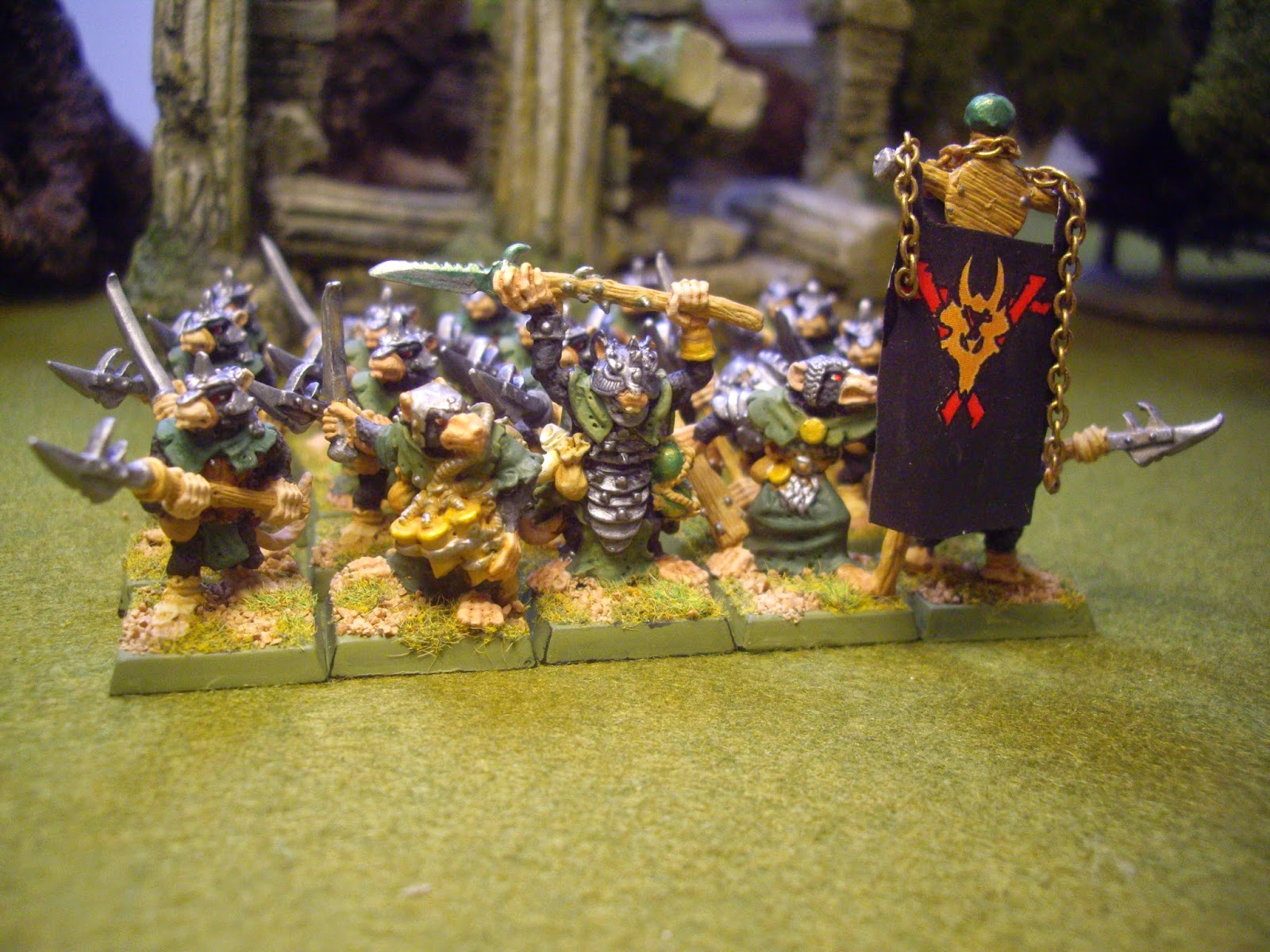 It is a matter of some debate among the wise as to whether the largest and most aggressive Skaven are born with black fur, or if they dye their fur black to mark themselves out as members of an elite.
What is certain in the case of the Skaven of the Fleafell, at least, is that the Verminlord Ratchedd Ticknibble is rarely without his company of exceptionally tough and vicious black-furred led by the Sewertyrant Skrawchutt Blackmaw.  Here for your viewing pleasure are presented a few pictures of Skrawchutt and his crack guardsrats. 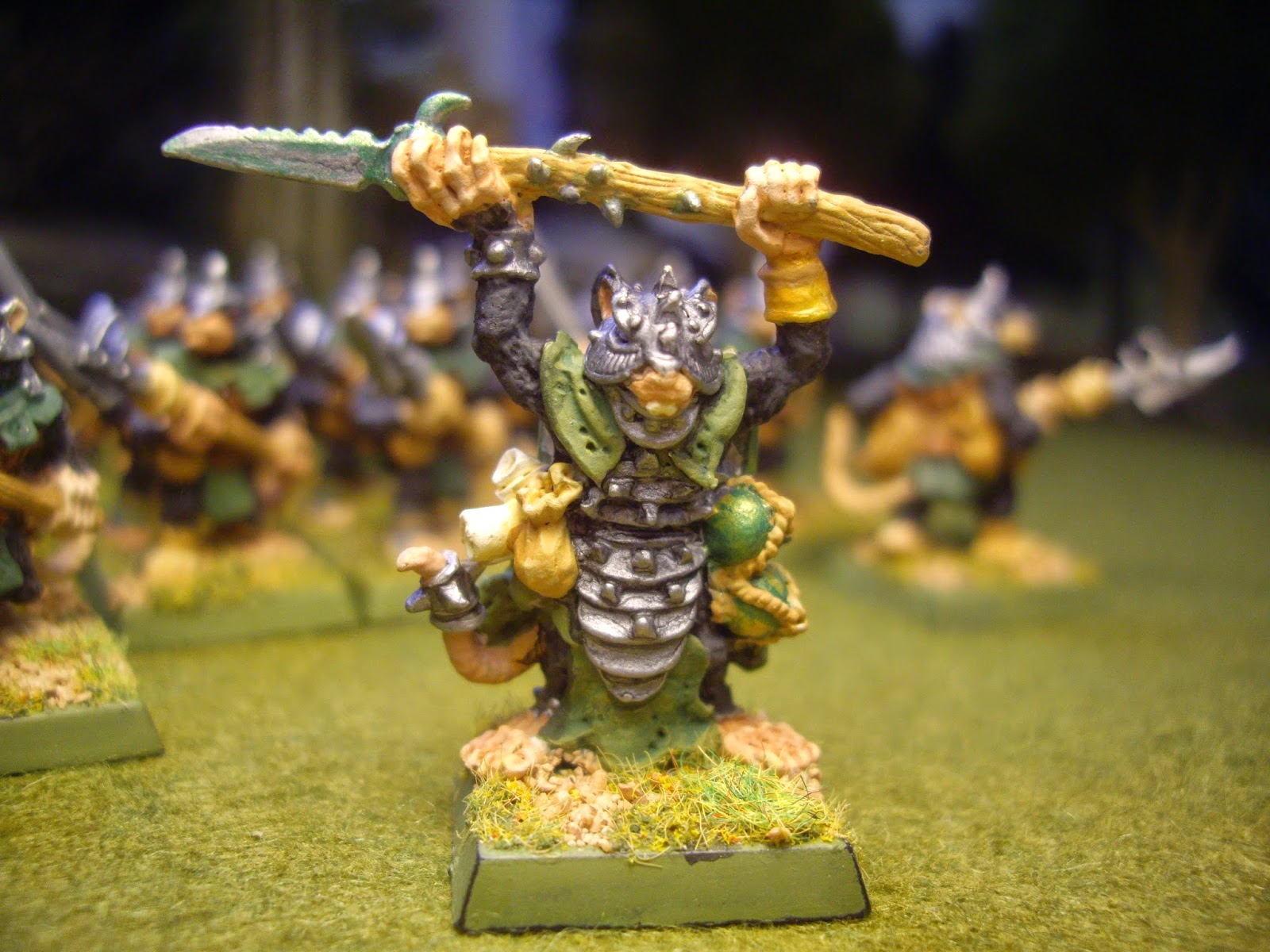 Skrawchutt is a good Skaven Lieutenant, which means he is always one or two steps away from murdering his Verminlord, Ratchedd.  Ratchedd keeps a close eye on him and tries to make sure he always keeps the assassins of Clan Eshin in hand for the day when he has to eliminate his right hand rat. 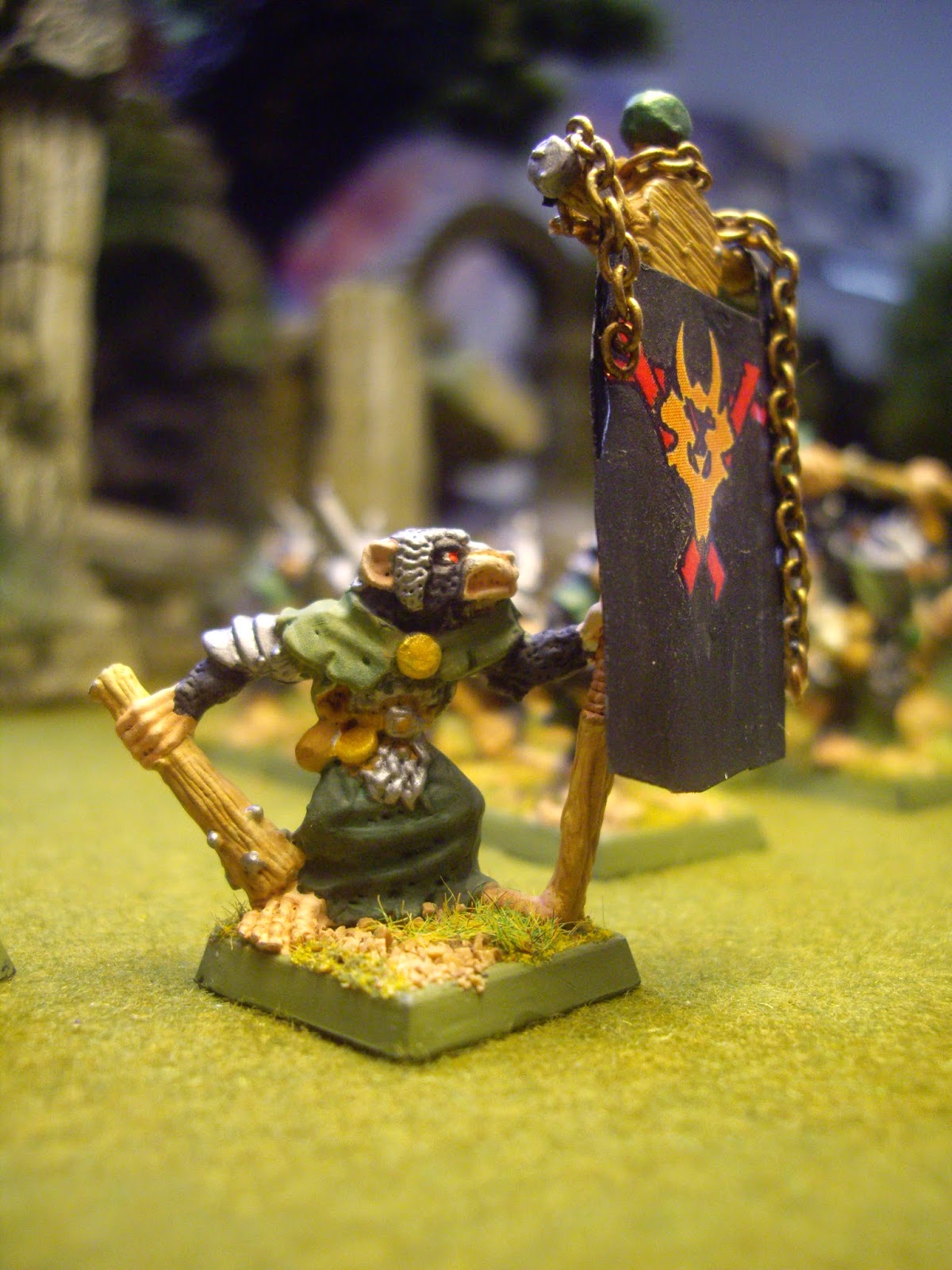 The standard bearer of the Black Skaven Guard.  The standard is not atypical of the banners carrried by the hosts of the Fleafell...head of the Horned Rat emblazoned on a black field.  The chunk of raw Warpstone at the top of the banner pole hints at its having magical properties. 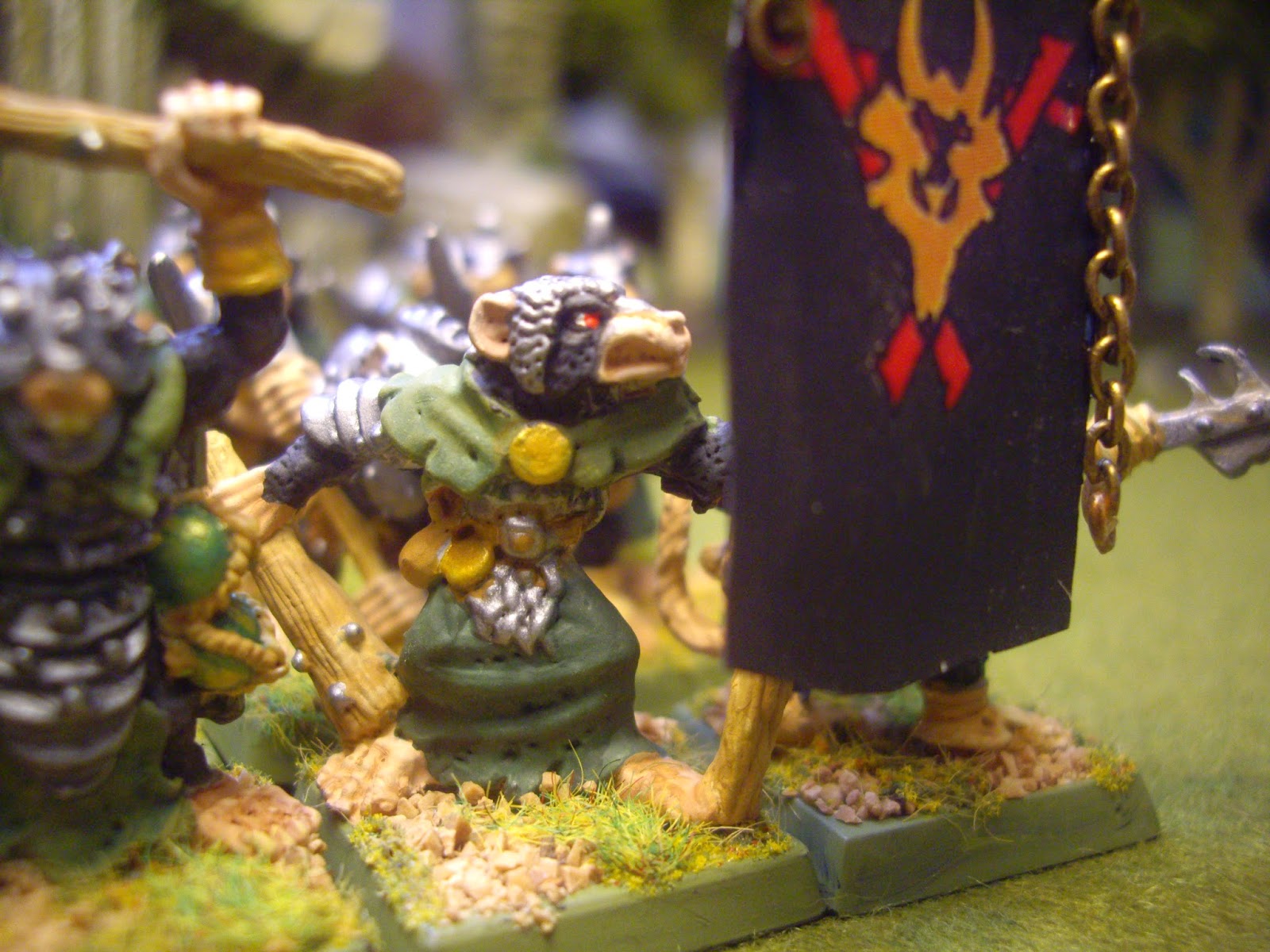 Another shot of the standard being carried into action... 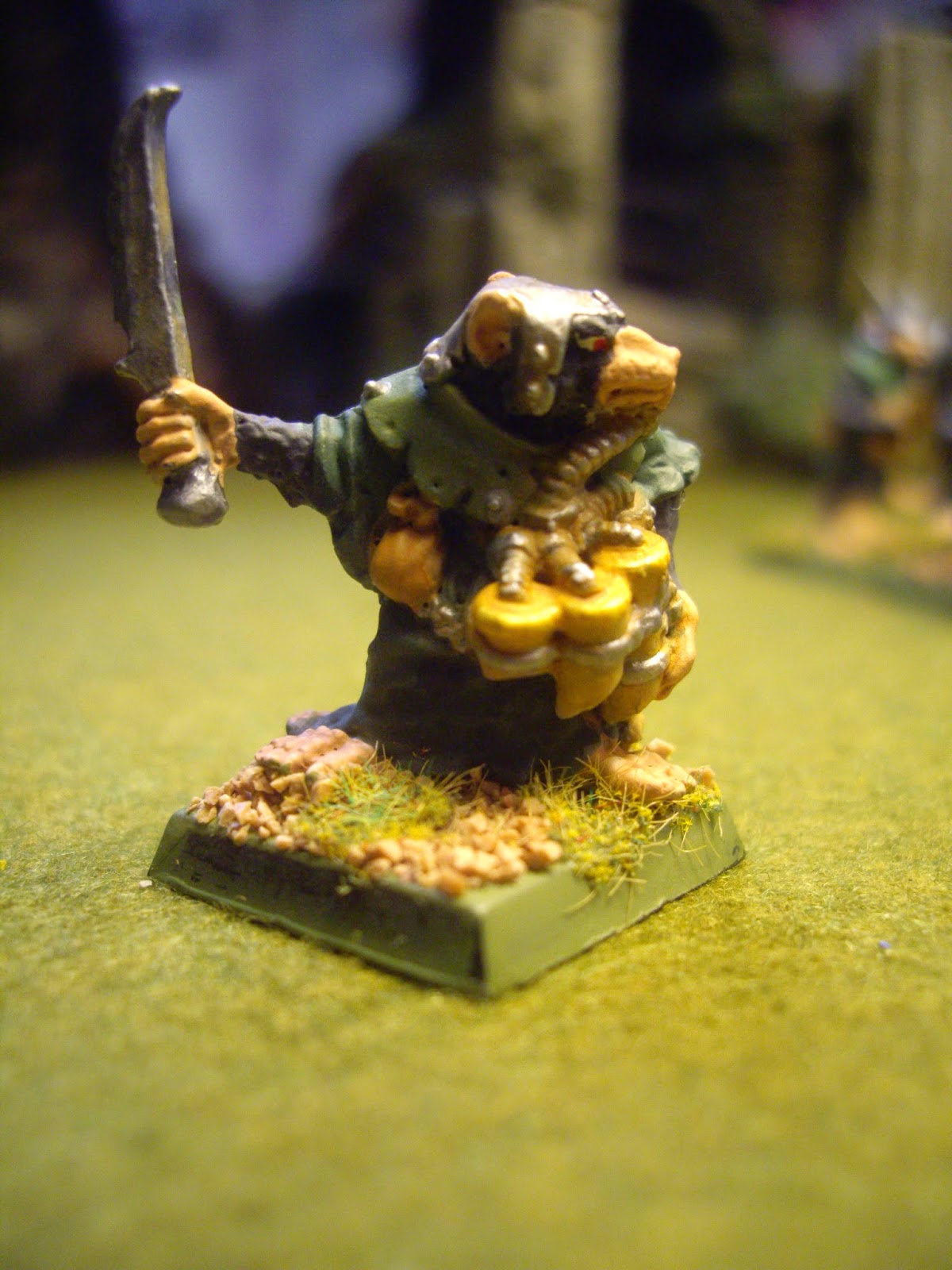 The regimental piper provides us with an interesting study of a Skaven musician and his instrument.  The weird pipes which clan Skyre provides to the Skaven warbands fill the air above a gathering Skaven host with a chilling and unearthly caterwaul.  The precise method of their construction is still not well understood. 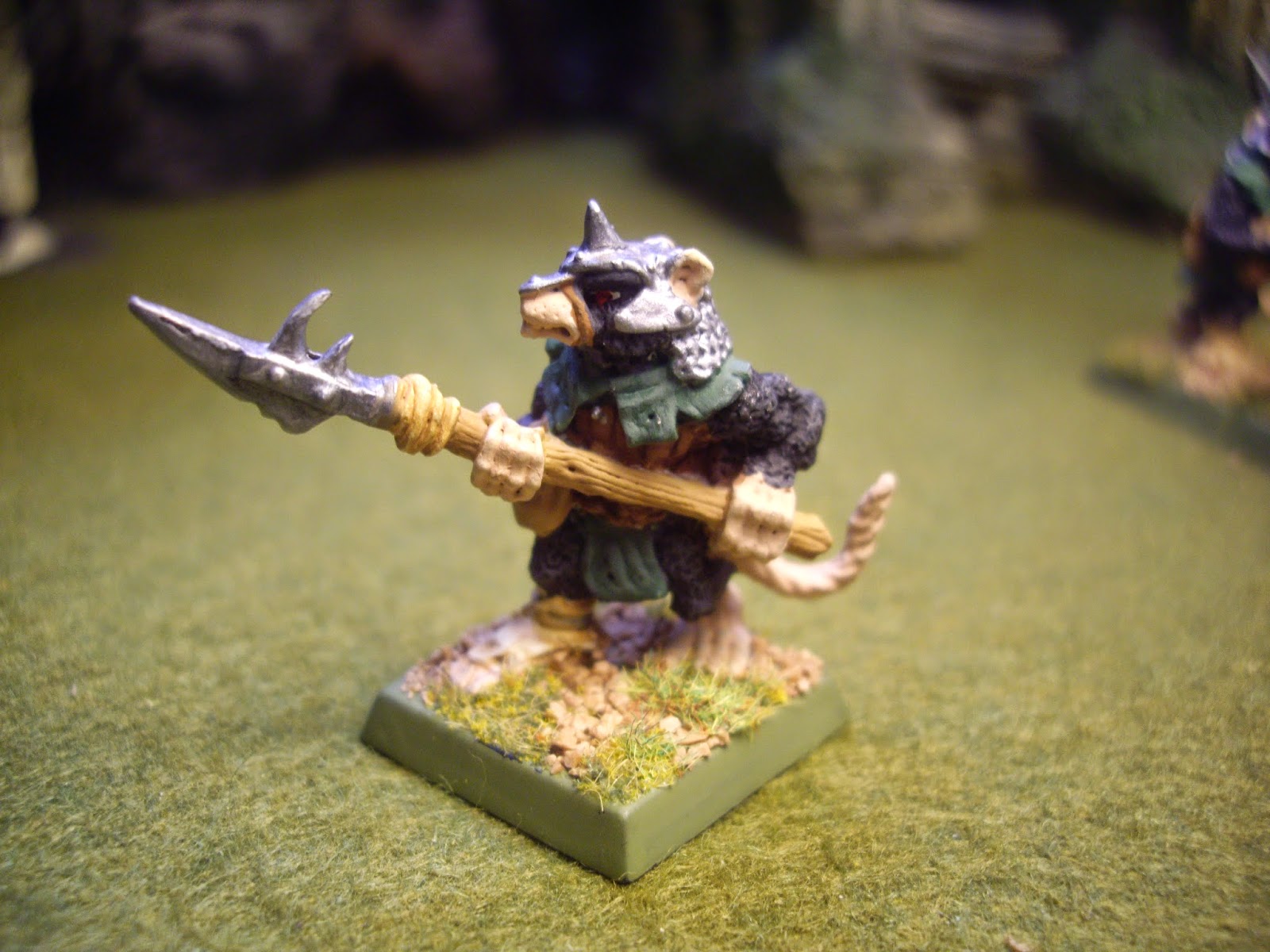 A typical Fleafell Guardsrat.  His upright bearing and fierce aspect alone mark him out as a member of an elite unit, but in addition he wears the closest thing to a uniform to be found in the armies of The Fell, enhancing his distinct appearance. 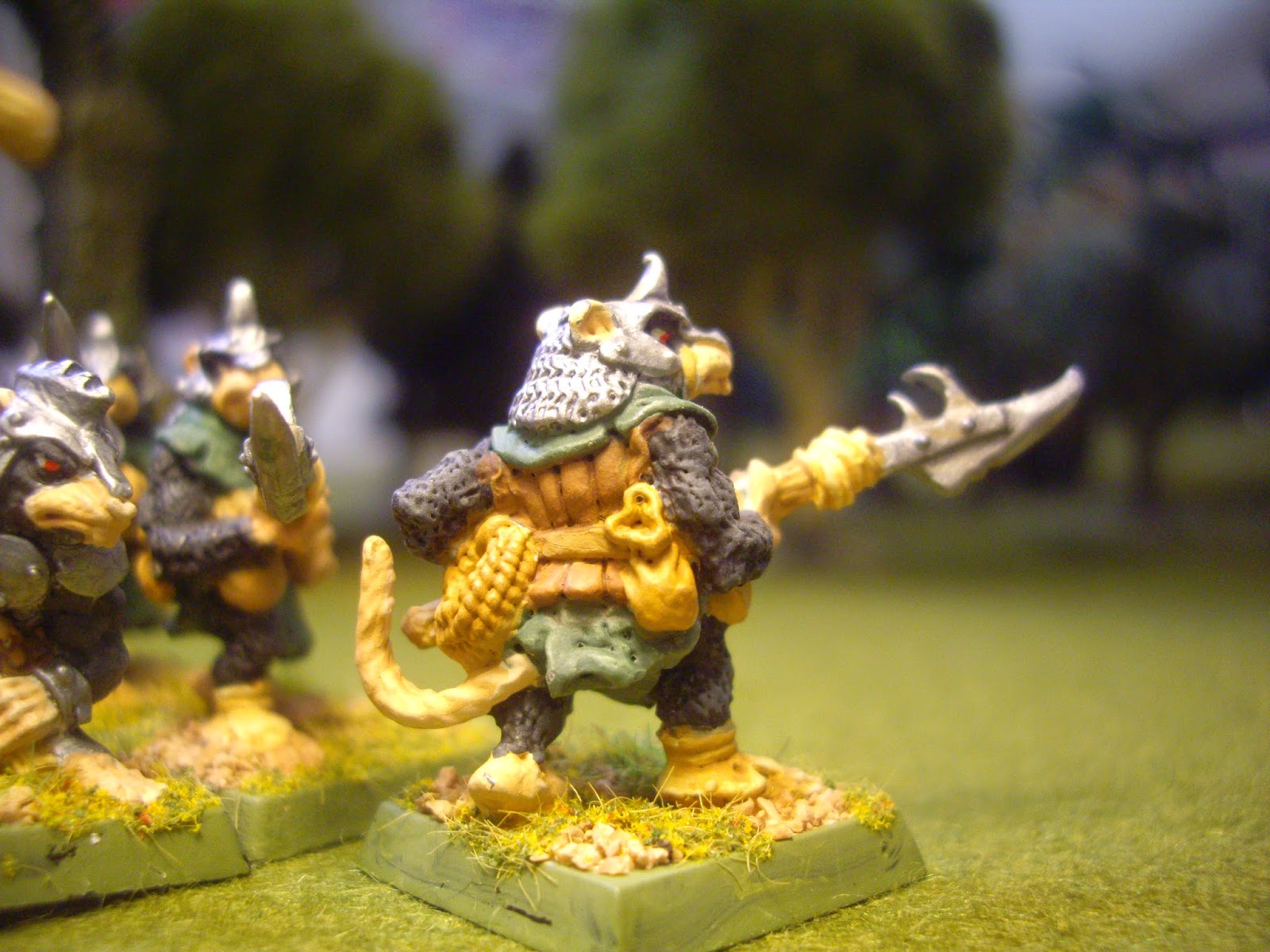 His weapons are also unique to his regiment.  These troops carry the heavy halberd for killing and a coil of stout rope for restraining valuable captives who'll they eventually take back to the Fleafell as slaves. 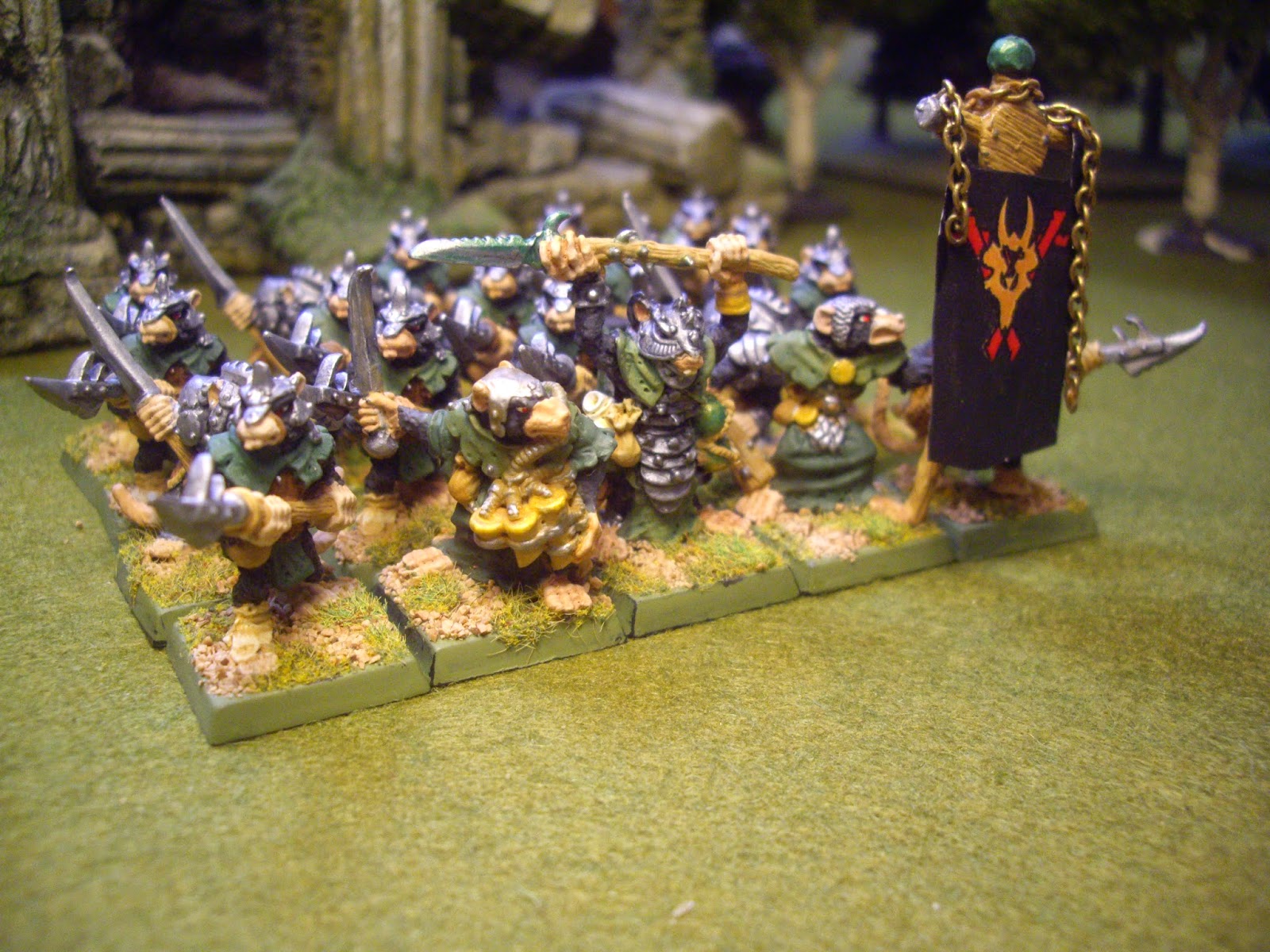 The regiment prepares to attack... 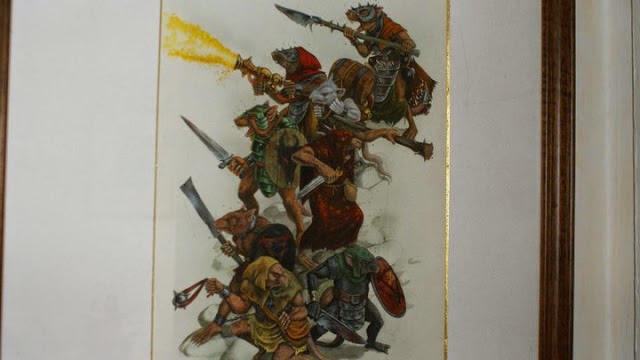 I actually painted all these minis in Afghanistan, but had to wait til I got home to make up a banner for them.  It doesn't show up very well in this rather poor scan, but I chose to paint my Black Skaven to match the illustration in Warhammer Armies...I liked the dark green on very dark grey fur.  I'm not tremendously happy with the standard.  I may swap it out with a scarier and more imposing one later.  So the Skaven are coming along.  A regiment of Skavenslaves is next, I think. 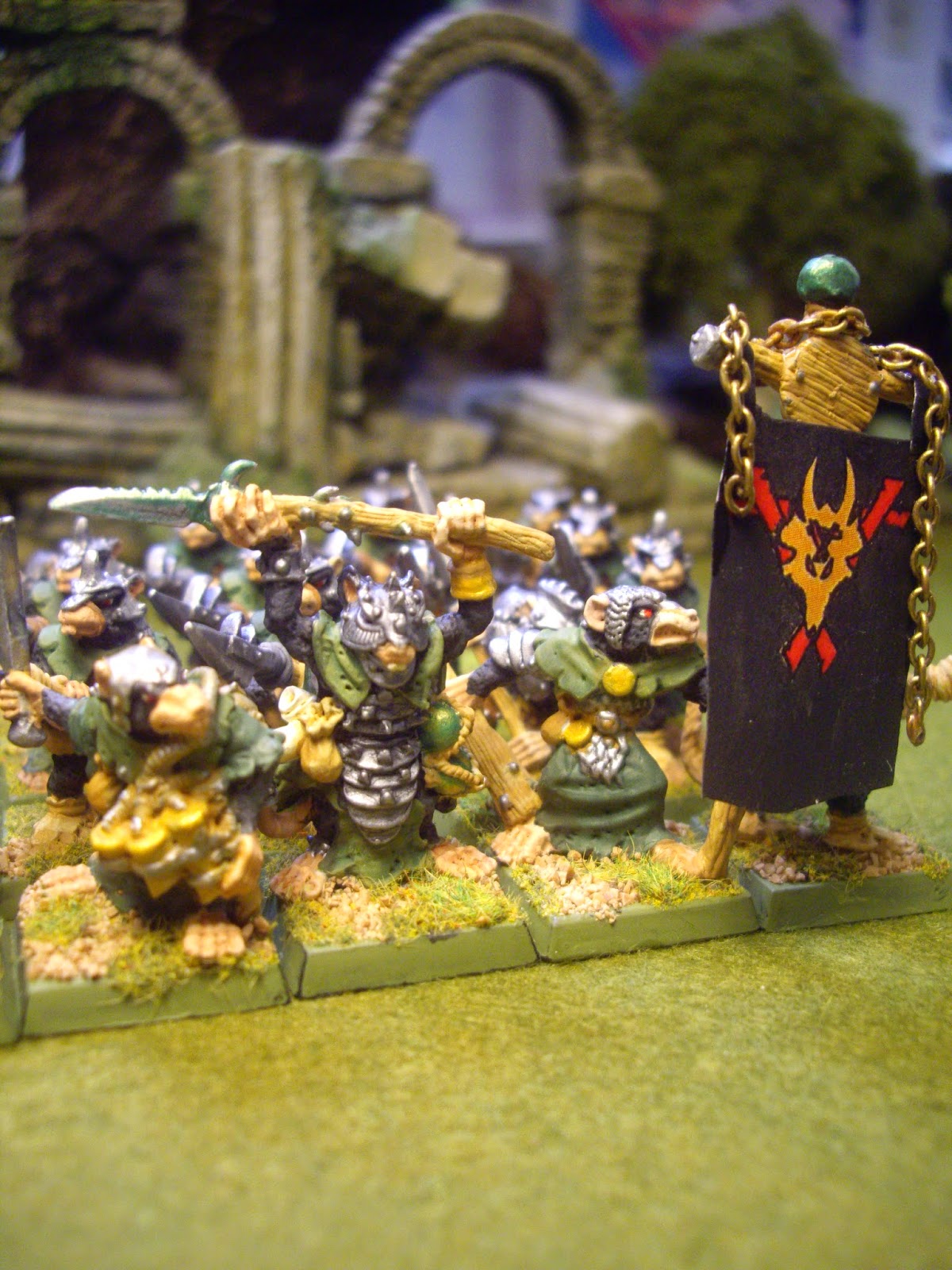 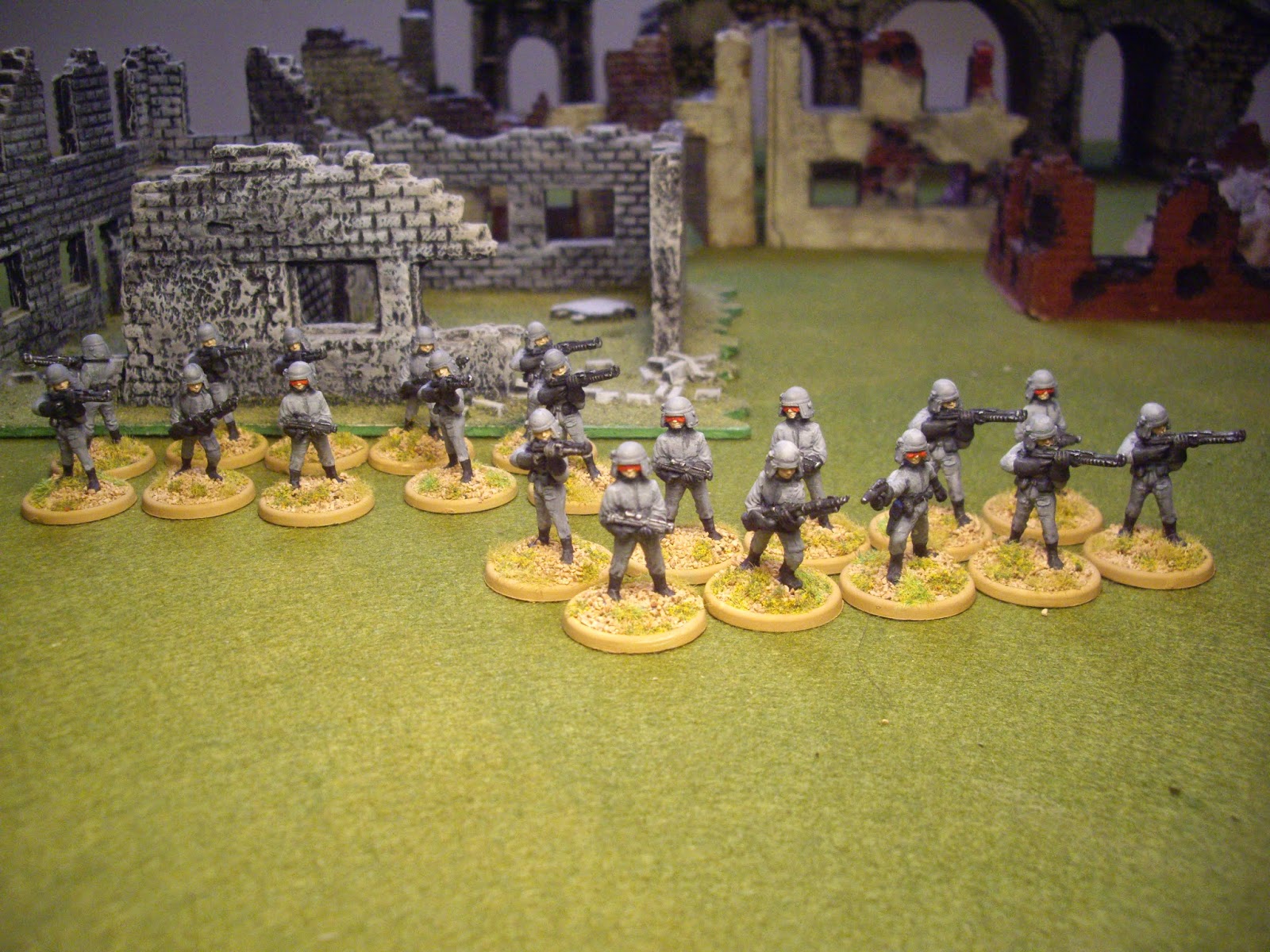 Although it is the white armored warriors of the Storm Trooper Corps who stand tallest in the popular imagination, they actually make up only a small part of the Galactic Empire's ground forces.  It's the job of the elite Storm Trooper Corps to seek out dissenters, fight and kill them where they live.  For the less glamorous but no less necessary work of securing and policing the Empire's vast territories, the regular soldiers of the Imperial Army must suffice. 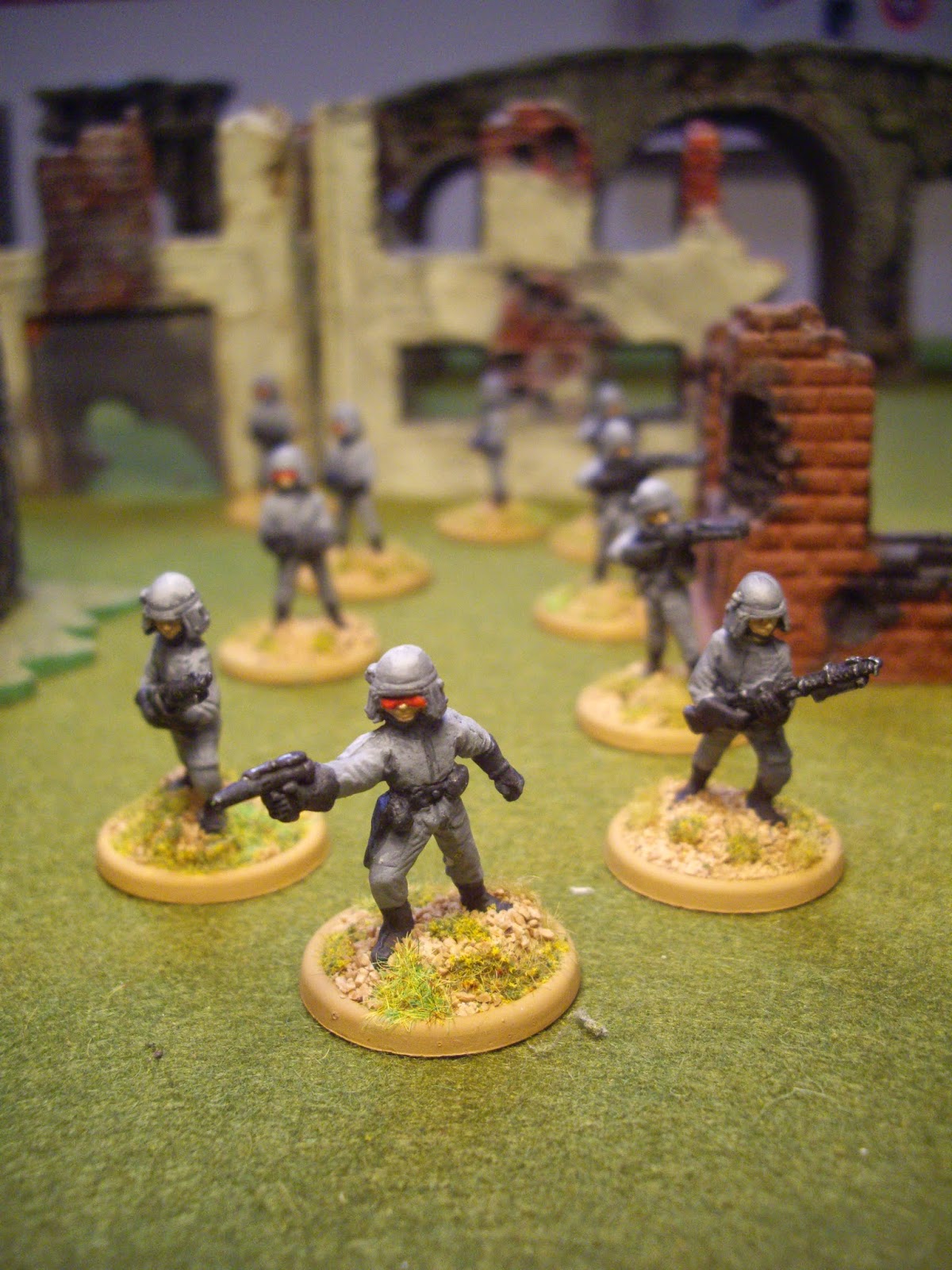 The Army is a mammoth organization, manned through a colossal and universally hated conscription program and sustained through the practically inexhaustible material resources of the Galactic Empire.  Army regiments are generally well armed and equipped, but are often indifferently led and motivated.  As such, their battlefield performance is notoriously uneven.  Shown here are two squads who can be seen as more or less typical of the Imperial Army squads who guard the ramparts of Empire. 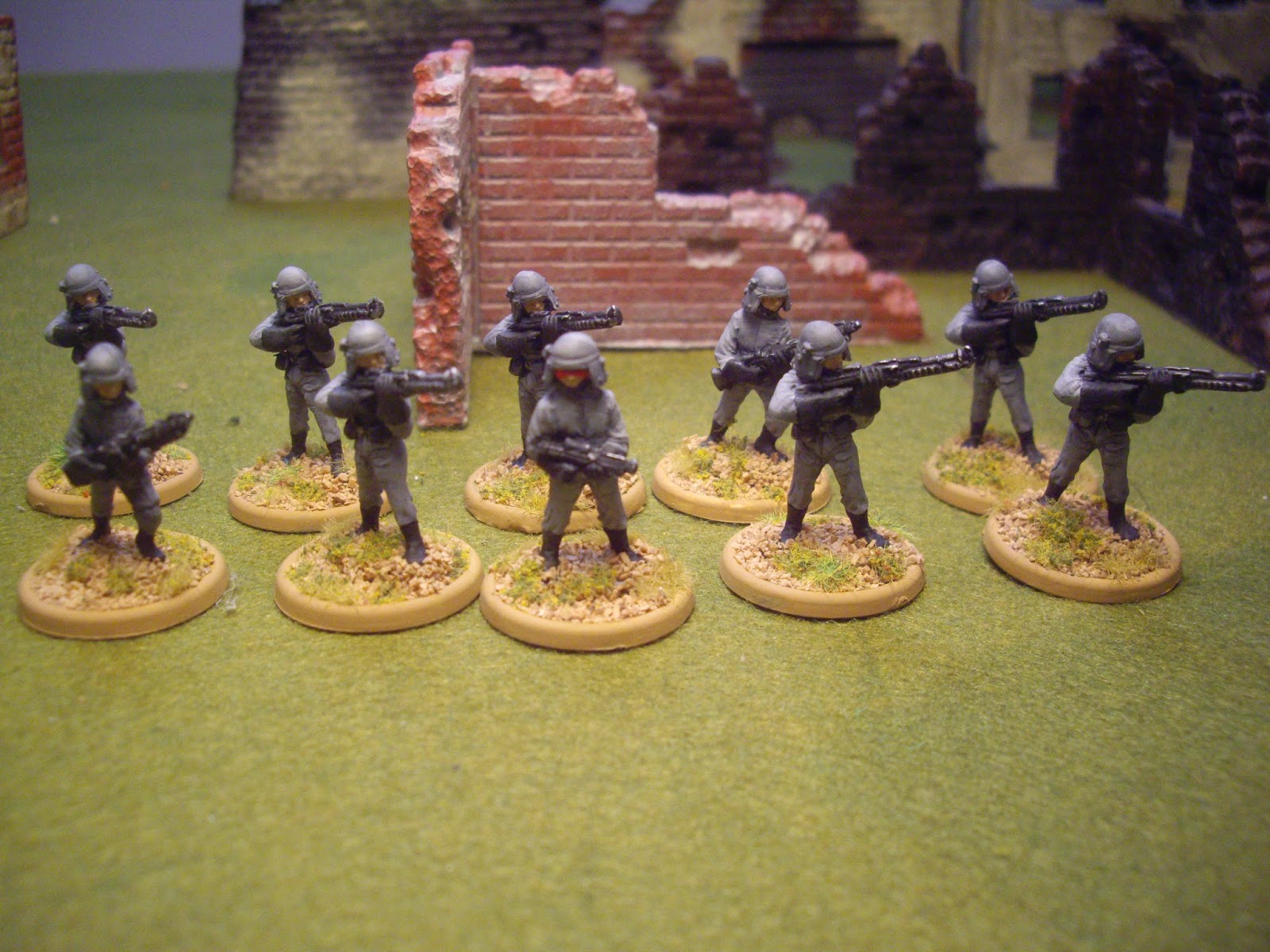 The Squad above has obviously been configured for ranged combat.  It is most likely part of a garrison force detailed to defend a fixed position, or for patrolling duties in open country.  The Squad leader has chosen to make himself conspicuous by arming himself with a blaster carbine rather than one of the clumsier but more powerful blaster rifles carried by his men.  This is perfectly understandable, since it is the job of the squad leader to direct the fire of his section and to communicate with his superiors, not to fight himself.  It does, however, make him an obvious target for enemy marksmen. 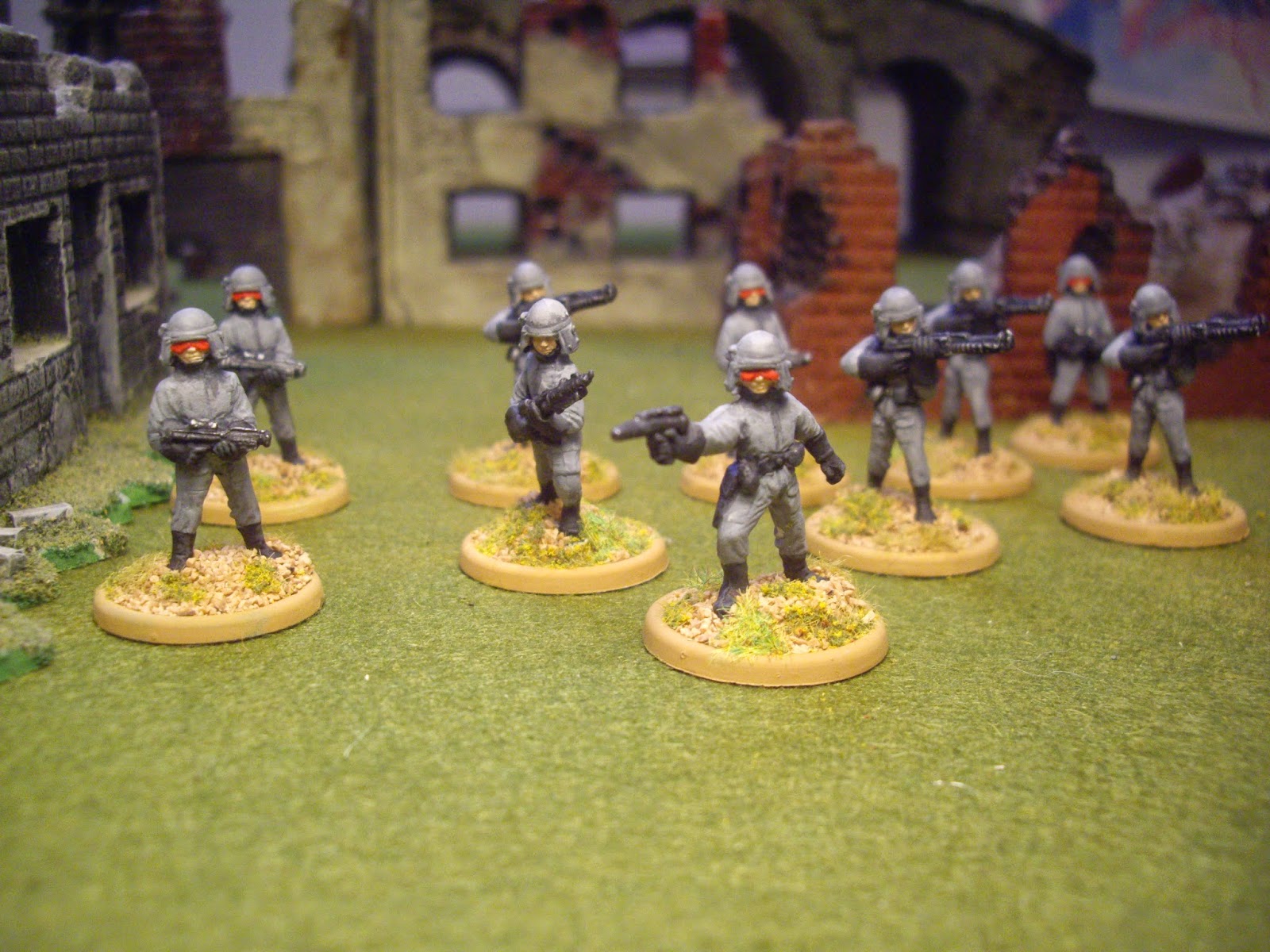 This squad displays a considerably more mixed weapons configuration.  It boasts five blaster riflemen and four carbineers.  The squad has probably been equipped for urban patrol and assault operations.  Should the patrolling squad take fire from a given building, the Squad Leader would most likely form a cordon around the building with his blaster riflemen, who would then suppress doors and windows with long to medium range fire.  The carbineers would then assault the target building, clearing rooms and halls with their short ranged but handy and powerful weapons and grenades.  Note the blast visors worn by the troopers with short ranged weapons, which protect their eyes from flashes of light and flying sparks and debris in enclosed spaces. 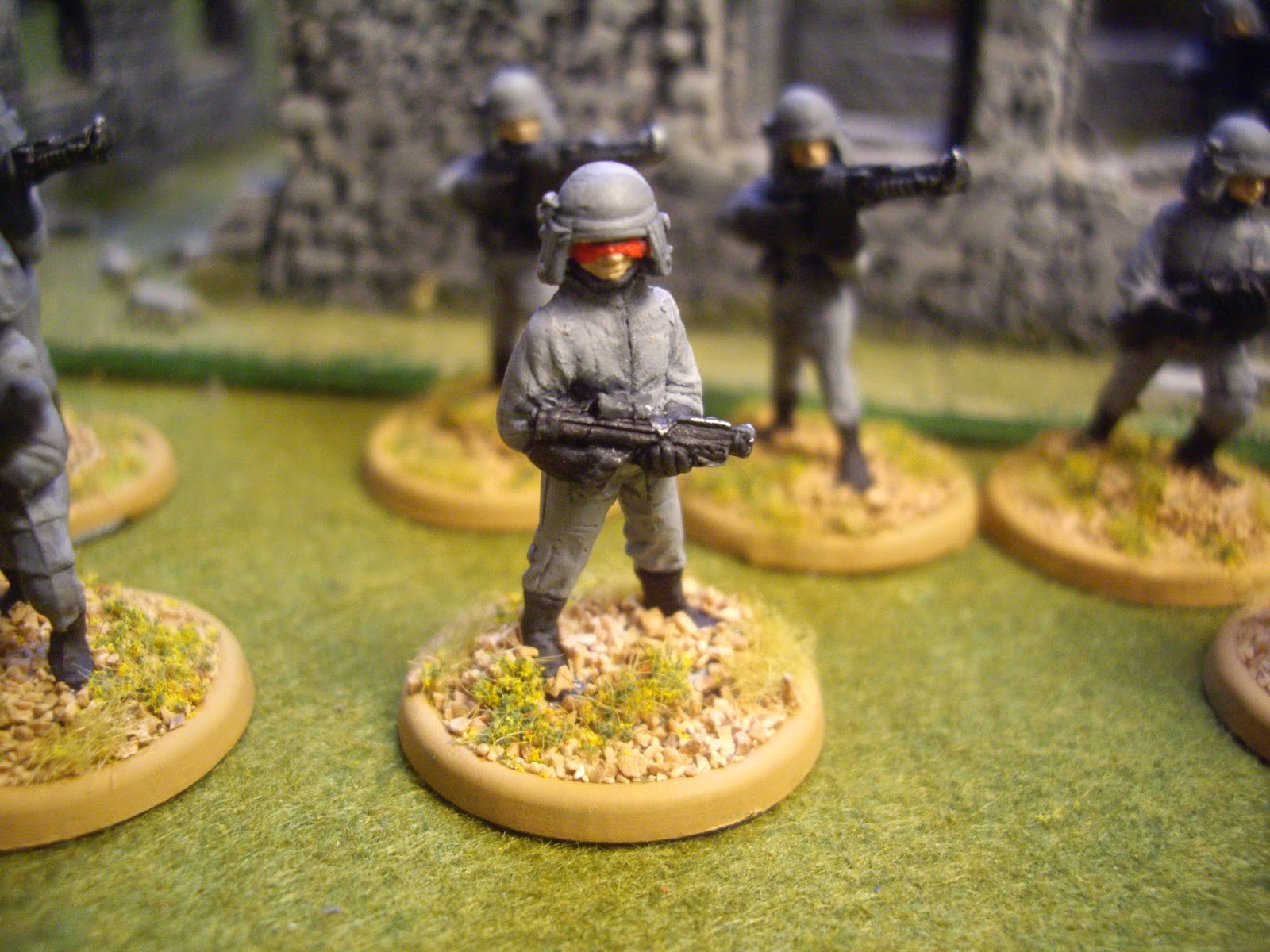 I arranged my Imperial Army platoon in 10-man squads as I figured the Imperium essentially sees them as expendable material and prefers to deploy them in nice round numbers that add up neatly.  I didn't distinguish the squad leaders in any way other than their weapons, as I figured Imperial planners probably prefer to deal with tactical problems by throwing masses of men and material at them, rather than going to the trouble of trying to establish the sort of officer and NCO corps that have historically been the keys to success for so many armies.  Dangerous to give that sort of training to men who are only indifferent to your cause anyway.  They might leave your army and take the training over to the other side. 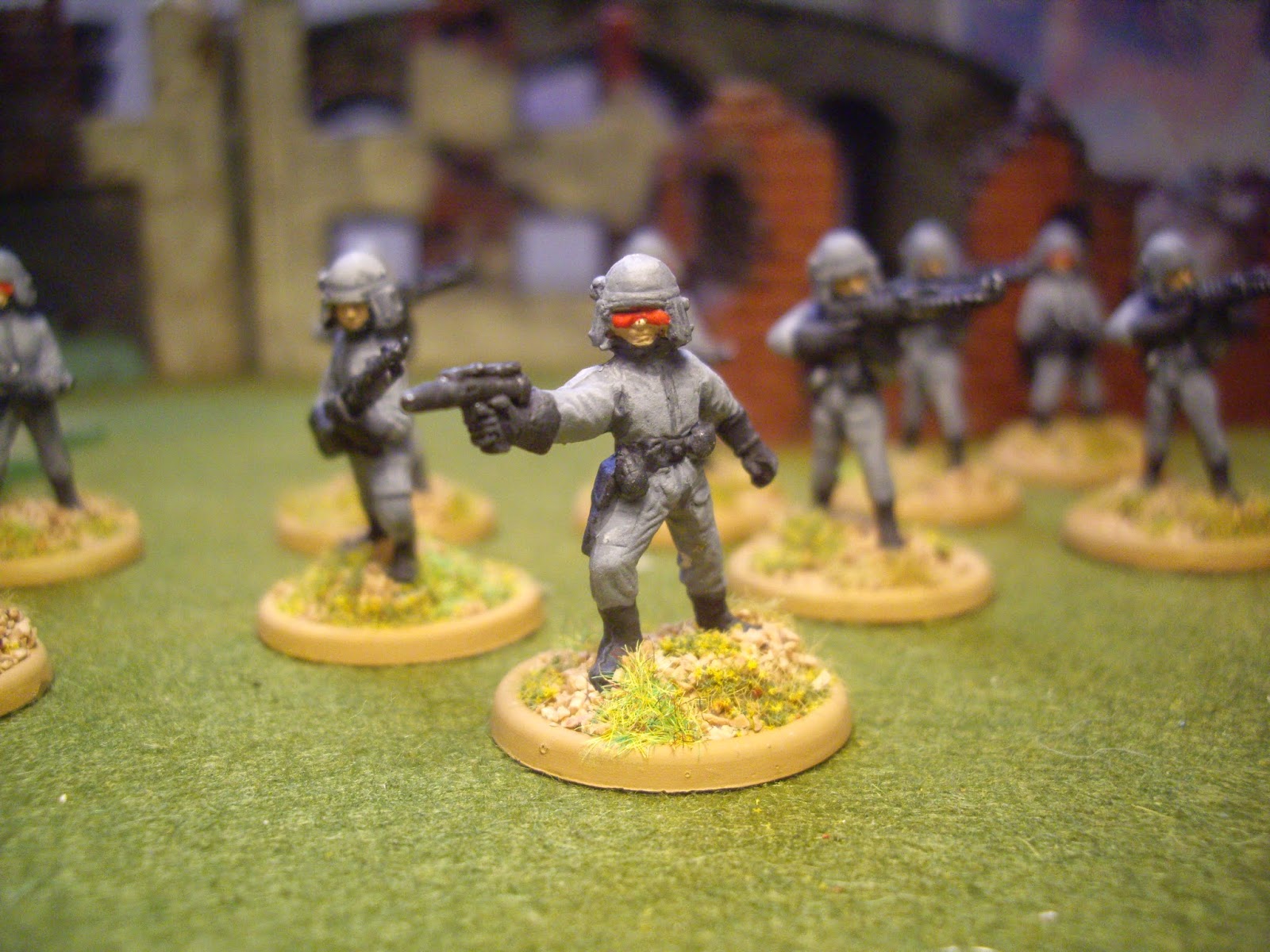 I plan on adding two more squads to this platoon.  That's in addition to the platoon command team, of course.  Finally, some bad guys to fight my rebs! 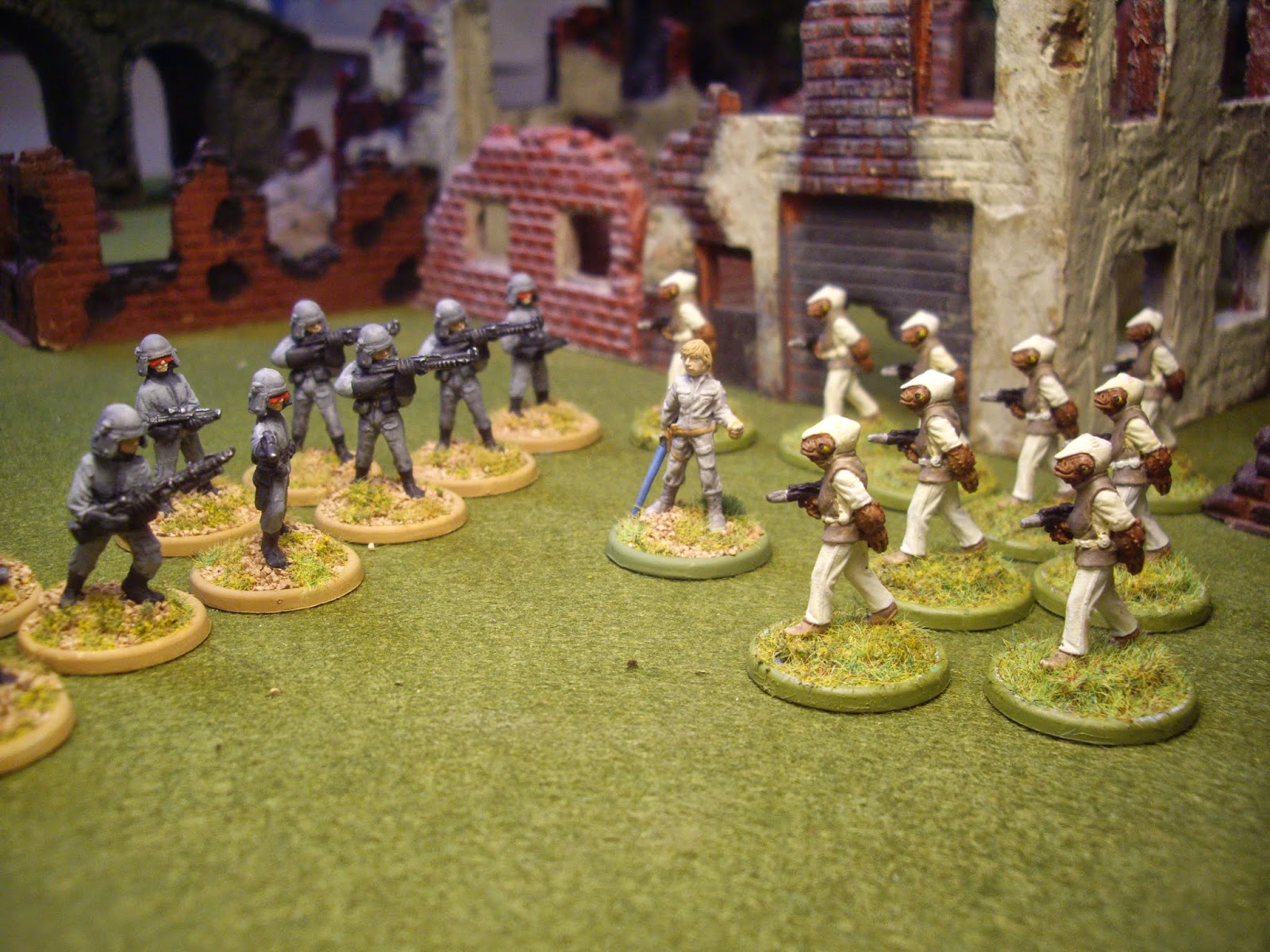 A young Jedi-in-training named Luke Skywalker leads troopers of the Mon Calamari Marine Brigade in an ambush of an Imperial Army patrol... 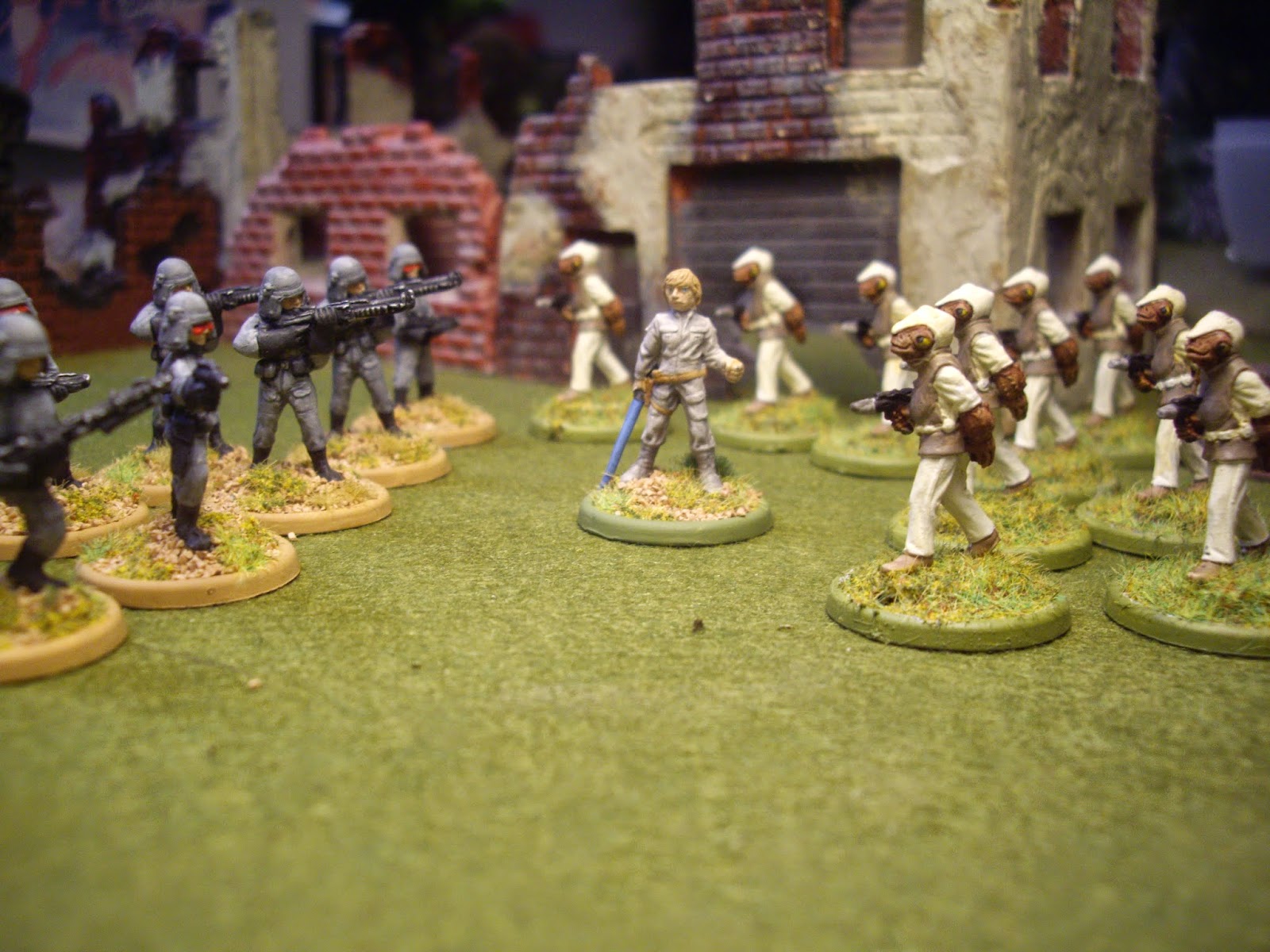 Prepare to be crushed, you Rebel Scum! 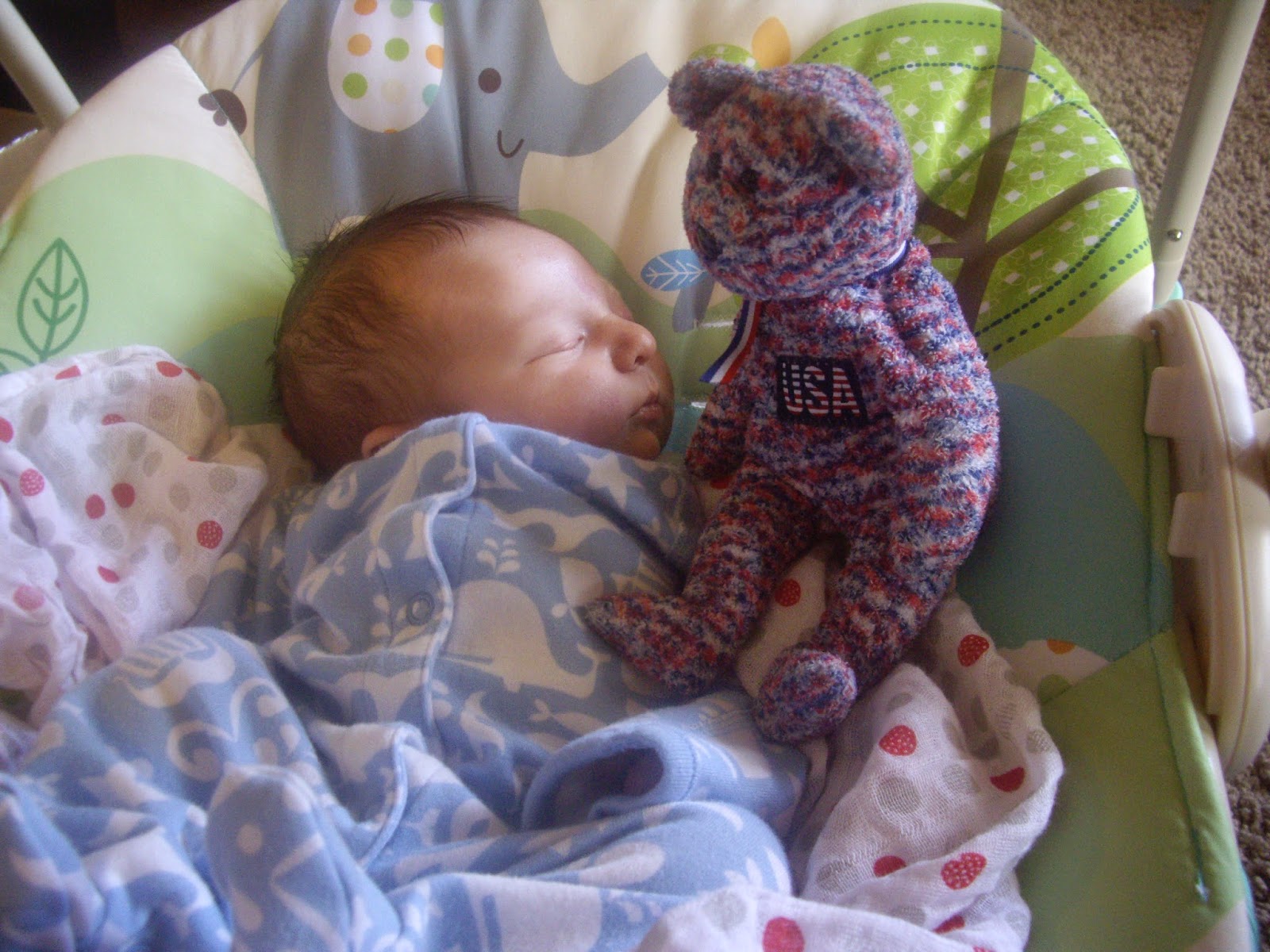 At the close of the month of February and after a very great deal of hard work, Mrs. Mouse produced a baby Mouse, conceived on the eve of Dad's deployment to Afghanistan.  As the deployment was winding down anyway, Father Mouse was able to get leave to go home early.  Long trip and long evenings awake with Junior have conspired to keep me from posting much, but hobby stuff has not been abandoned completely.  A lot of posts of newly painted additions to my armies are coming this weekend.  Also plans for the blog in the coming year.  Some new pieces on games and on Mouse's doings and findings in Afghanistan are cooking too, so stay tuned, chums!
Posted by Mouse at 9:18 AM 11 comments: