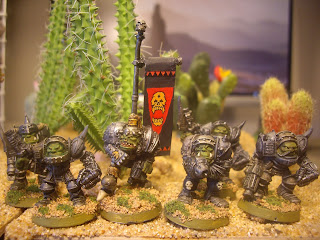 Gnummschkull Terrdlipp is by no means the most notorious Ork Warboss ever to clash with the men of the Wailing Reach.  He has not levelled the most fortresses or sacked the most cities or built the highest pyramid of skulls, not for lack of trying.  He is in fact largely forgotten these days, his depredations having taken place some centuries ago, and far beyond living memory. 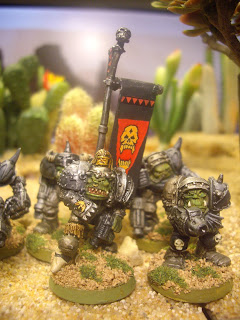 He is, however, very typical of the sort of minor Warboss whose raids and plunderings have gnawed at the fringes of the Reach for millennia, and as such, by better acquainting ourselves with him, we can learn much about his kind. 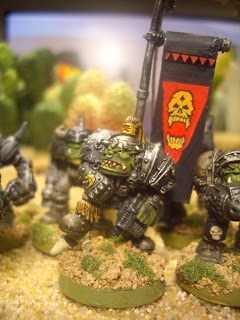 This series of data faxes shows Gnummschkull in the midst of a group of his cronies shortly after making planet fall on the desert world of FarGo sometime around the Year of Our Emperor 39470.  , Gnummschkull had just made something of a name for himself in the Wailing Reach by carving a red belt of slaughter and destruction across the face of the marshy world of Nepenthe and had loaded his ships with plunder. However, it was not long before Gnummschkull's horde began to suffer at the sharp end of counter attacks by Planetary Defense Forces, the 4th and 9th Nepenthe Imperial Guard regiments, and the Dead Men Space Marines.  Thus Gnummschkull decided to vacate Nepenthe and seek some other nearby world on which to exert his will.
Unfortunately for Gnummschkull, the planet he chose to attack next was FarGo.  Though arid and sparsely populated, FarGo is inhabited by a race who call themselves the Tejaboors, sometimes rendered as Texaboers.  Amoung all the Emperor's children, one would be hard pressed to find a people more fiercely proud, self-reliant and more willing to use violence as a means to solve problems than the Tejaboors.  Gnummschkull's horde had hoped to help themselves to some of the vast herds of tasty bison-like animals they had observed roaming the planet's surface from their ship, but soon found the herds to be energetically defended by the accursed Tejaboors, whose "Ranger-kommandoes" proved extremely lethal and difficult to come to grips with. 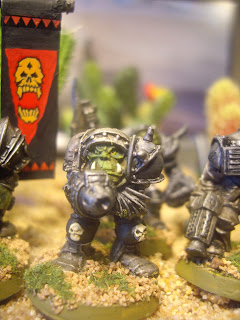 A good, proper fight was finally had by all, though, when an enormous force of Space Marines and Imperial Guardsmen landed on FarGo and immediately closed with Gnummsckull's horde with the intent to destroy it.  Gnummsckull's boys proved to be tough nuts to crack, however, and after two weeks of fighting the expeditionary force was forced to temporarily break off its attack to refit and reorganize. 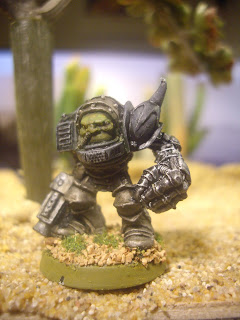 In the lull, Gnummschkull held a council of war with his under bosses.  The council largely consisted of Gnummschkull yelling and hitting his nobs on the head while they complained that casualties had been heavy, that there was nothing to eat and that 'Dem Dead Boys is awful 'ard."  At last, Gnummschkull gave up in disgust and agreed to that the horde should leave the Wailing Reach for greener pastures.  And so they did.

At last I've managed to paint up a proper commander for my Ork horde! 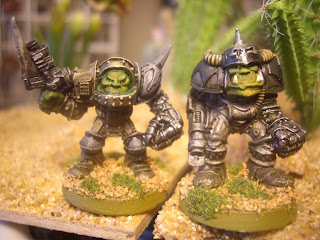 Had to take these pictures on my desk because the electricity has gone out in the club house.  Hope to have that fixed shortly.