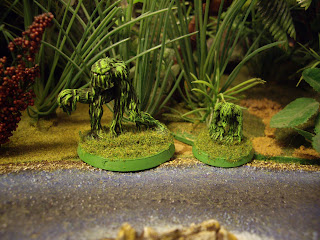 Sightings of this mysterious creature have been reported often, both by the Rangers of the Southern March, and more frequently, by herdsmen courageous (or foolish) enough to let their animals stray near the edges of the Tulgey Wood.  The figures here depict a sighting by the Ranger Karl Langfusch, in which a Shambler was accompanied by what appeared to be an immature member of it's species. 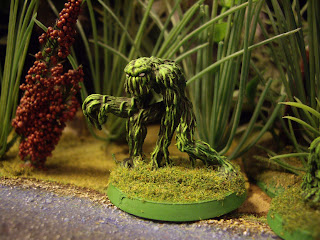 All reported sightings of Shamblers collected by the sage Olorro describe a large, roughly man-shaped creature, apparently composed at least largely of lank, often rotting and putrid-smelling vegetation, leading Olorro to describe the thing, in his treatise Bogies and Beasties of the Black River Country, as some sort of earth or plant elemental.  Though large and seemingly powerful, and menacing in it's aspect, there are no reports of a Shambler actually attacking a man. There is a passage in Olorro's book however, in which a herdsman claims that he once saw one of the creatures in the process of devouring a lamb, seemingly not in the conventional fashion, but by smothering the young animal in its sodden folds, and absorbing the lamb's substance into its own body. 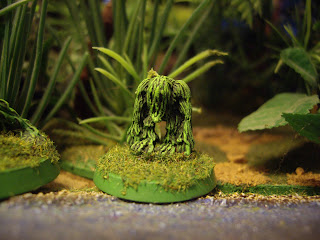 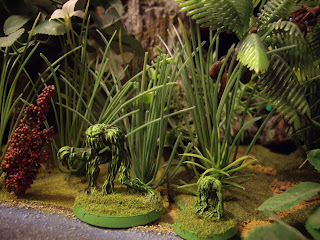 The creatures are evidently not shy about showing themselves to men, but invariably retreat when approached, disappearing without leaving so much as a track or a bent blade of grass to betray their passage.  Consequently, we still know almost nothing about them.
Posted by Mouse at 1:11 AM No comments:

Email ThisBlogThis!Share to TwitterShare to FacebookShare to Pinterest
Labels: Bogies and Beasties of the Black River Country 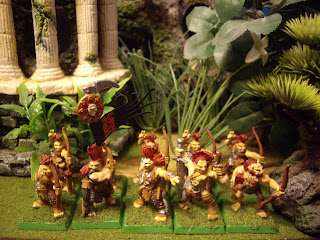 In all hours, in all weathers, sentinels stand upon the ramparts of remote forts and lonely watchtowers up and down the Black River country, and listen in fear for the wail of a hunting horn, and the unearthly baying of a pack of Devil-hounds...for this horrid music heralds the approach of the Mad Hunt of Chaos...one of the most feared warbands in all the loathsome and corrupted host of the Chaos Lord, Buzzgob Phesterlick. 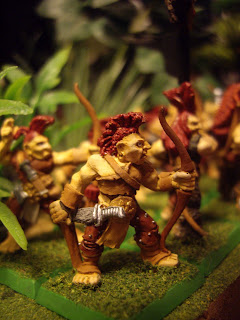 Behind the roaring, shrieking packs of twisted, mutant chaos hounds, behind the fleet footed Beastmen who drive them, behind the Horned Rider who is Master of the Hunt, run Khorne's Huntsmen, degenerates and psychopaths eager to shoot down prey the hounds cannot catch, to take captives to torture and slay...all in the insane hope that he Blood God, mighty Khorne, will be pleased by their efforts and reward them.  These brutal Chaos thugs wear no armor, the better keep up with the hounds, and are led by a pair of Chaos Marauders... 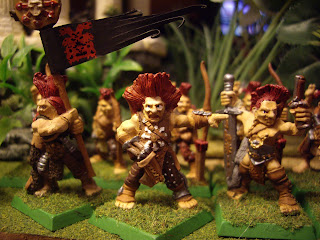 This distinctly unwholesome bunch are part of a sub-army for my chaos horde.  The warband will also include 24 chaos hounds, 4 hound handlers, and a Master of the Hunt...a mounted Sorcerer of Nurgle. Always liked these miniatures, (They remind me of the Humongous's "Gayboy Berzerkers" from THE ROAD WARRIOR...just need some rooster feathers on the shoulders)...I've been collecting them one or two at a time for a couple of years now.  I'm glad the unit has finally come together... 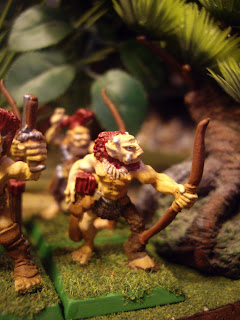 Mutated Thug...actually a great old Beastman figure whose inclusion I thought would be a nice touch... 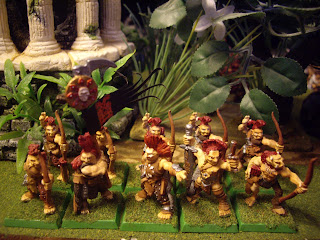 'Blood for the Blood God!" 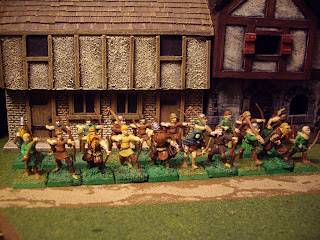 Scattered throughout the little frontier realm of the Baron Von Refn are many tiny farms and hamlets.  This decentralized pattern of settlement grew up out of necessity, for the Black River country is hard, and settlers must cleave to good soil and water where ever they can find it.  In these little communities, exposed to all manner of dangers, there is a common saying:  "When minutes matter, the Baron's men are hours away."

Though they are dependent on the army of the Baron for protection against invasion, the people of the Black River country, whether tenant farmers or free-holders, know that they must often be the first line of their own defense against Goblinoid or Chaos raids, Snotling infestations, random terrifying undead incursions, or the unexpected depredations of solitary wandering monsters. 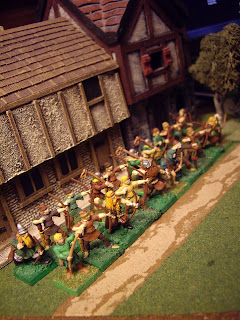 Although the Baron posts small garrisons throughout the land, and though his Sheriffs and Rangers are always on patrol, the Black River country is wild and dangerous in the extreme, and farmers, drovers and woodcutters must always be prepared to hold their own until help arrives. 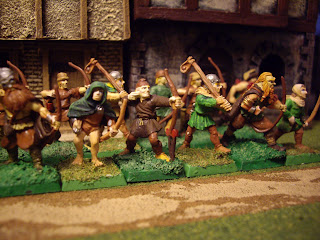 Though not professional fighters, the "Rapscallions" have learned to turn their homesteads into sturdy forts manned by determined, if not particularly skilled, archers and slingers...and so, thus far, the realm has survived. 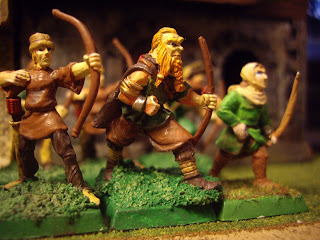 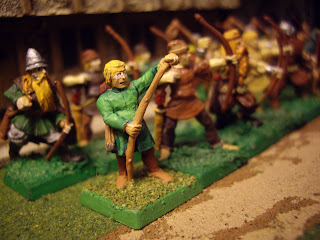 
This was another unit that was long in the making.  About half the models are Black Tree/Harlequin figures I found in a bargain bin at GAMESCAPE when I lived in San Francisco about a hundred years ago.  Somewhere along the line  picked up  5 old Glory barbarian archers that got added to the mix, and there is also a Saxon archer from God knows what historical line. Just this year, I rounded the unit out to 20 models with the addition of some nice old Perry Brothers Medievals.


Warhammer Armies  only allows the use of peasant levy archers in the Bretonnian army list.  They do not appear in the Empire list, which may be just as well, since, with a Ballistic skill of 2 and a leadership of 6, they are next to useless.  I think they may be fun for use with scenarios, however, and may even be a good investment for city fighting or sieges. 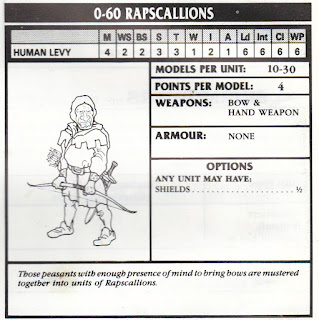 We shall most assuredly see when I get enough finished figures together to start doing some battle reports.
Posted by Mouse at 3:19 PM No comments:

3rd Company of the Muster of the Great Hall 'Red Dragons' 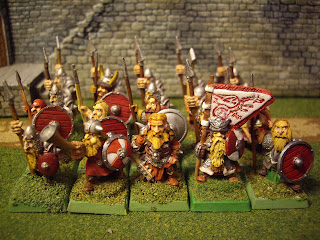 The warrior fraternity of the Red Dragons is one of the oldest in Thunder Mount, and traces it's origins nearly back to the founding of the colony. It was one of the very first fraternities to be organized after the Dwarves of the Mount ended the practice of fighting in clan-based formations. 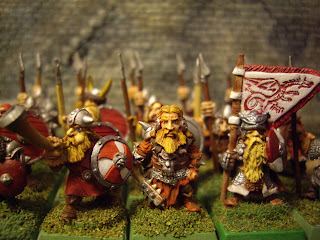 The Dragon symbol emblazoned on the banner commemorates the capture of the original Thunder Mountain caverns from their most fearsome guardian, the Wyrm now remembered as Frenga the Devourer.  The founders of the Red Dragons were two brothers, Herl and Herst Stonebelly, celebrated heroes of the founding and key players in the touch-and-go contest with Frenga.  Indeed it was Herst who preserved the egg from the Frenga's nest which centuries later produced Frenga's one known offspring, Felenc, The Fire on the Mount. 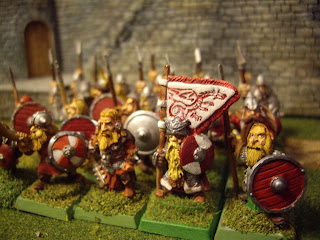 Undoubtedly more audacious than wise, the brothers in later years swore a rash oath to map the country beyond the Black River.  Taking a small band of companions, they passed into the east and were never heard from again. They left an impressive legacy, however. The Red Dragons remain to this day vigilant and formidable Guardians of the Thunder Mount colony, as does Felenc. 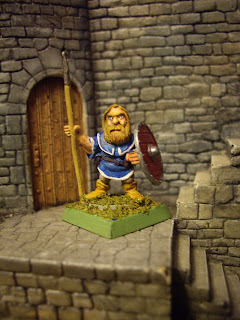 This unit was cobbled together out of a wild hodge-podge of Black Tree, Old Glory, Grenadier and Metal Magic figures.  And there's one old school Citadel figure in there, the 'Bombur' of the unit...

I recently dug most of them out of the cobwebbed corners of my collection, added a few new ones, and tried to wash, repaint and touch up some of the worst specimens in order to get a decent looking unit together.  I'm not sure I succeeded but I tried. 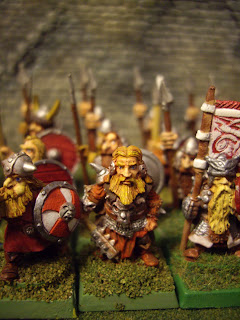 Warhammer Armies makes forty dwarf warriors mandatory for your Dwarf army.  These fellows will cover half of that requirement.  Spears are nice because they give some of the second rank figures the opportunity to attack, and provide some slight advantages when going up against cavalry or flying creatures.   Dwarves being above average fighters, I think spears are worth the points. 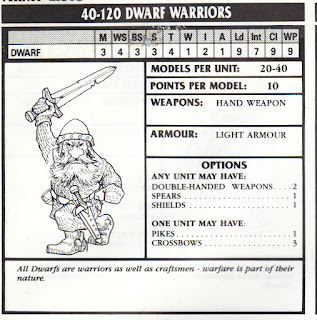