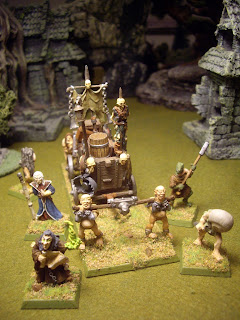 Another collection of ruined things, degenerates and bestial horrors trailing feebly in the wake of the Chaos Horde... 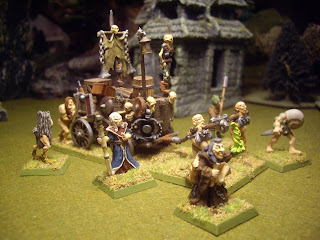 This completes my Chaos baggage train project. at least for the time being, and overall, I'm pretty proud of it. 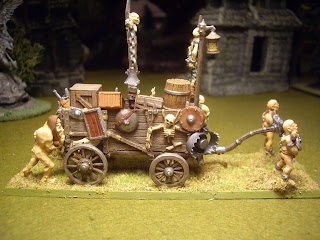 Again, I used the RAFM undead war wagon as the base for the cart model.  This time I left the wagon pretty much intact, keeping the side panels and the original wheels.  I did add some bits here and there...some extra shields, etc. 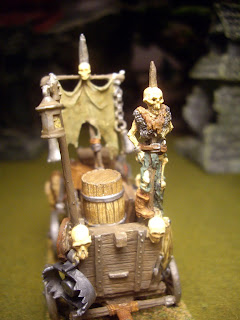 To the front of the wagon, I added a Citadel plastic lantern from some Mordheim kit or other, and some poor unfortunate metal impaled guy by Armorcast.  Most of the crates and barrels which fill the wagon are Armorcast, too. I think. 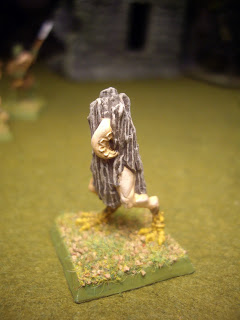 As was the case with the last baggage train section, I used mostly Eureka figures for the camp followers... Here is Mr. Log.  He's big. he's heavy, he's wood. 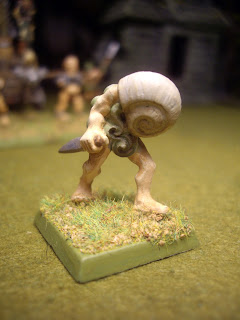 And here is Mr. Cthulhuoid snail/mollusk thing.  Despite his cruel and severe mutations, he still seems to know how to dish out violence with that kitchen knife he carries, so watch out. 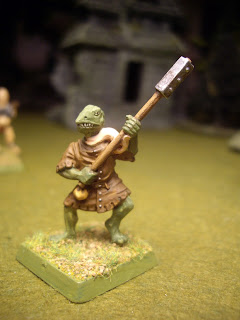 In spite of his own mutations, Lizard Lad is still quite agile and dangerous, and makes himself useful by inspiring the cart's beasts of burden to ever greater efforts with blows of his iron shod staff. 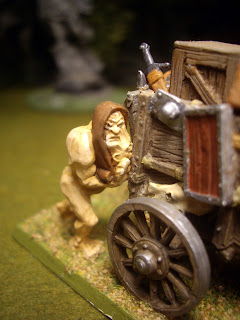 Here one of the cart's draft animals can be seen laboring away.  This is also a Eureka mini.  The figure has two faces that are sort of melted together.  Fun idea, but unfortunately one of the faces is invariably obscured by whatever the figure happens to be pushing on, so you can never get a really good look at him. 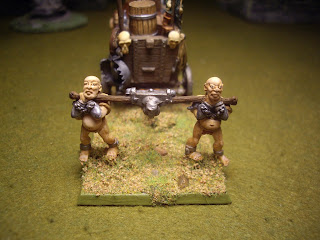 I think all Oldhammer fans recognize these guys.  I was lucky to be able to snatch them up by themselves on Ebay a few years ago for a pittance. 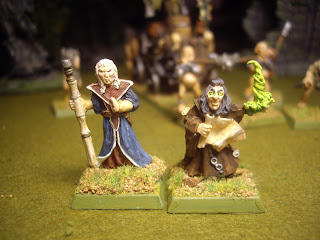 Last of the Camp followers.  These are cultists rather than mutants.  Citadel witch on the right and a Grenadier Drow or Vampire on the left.  I bought the witch about 4 years ago with the intent of using her as a camp follower for a baggage train someday.  I had no idea what the finished project would look like at that time.  It's taken a long time for all the other pieces to fall into place. 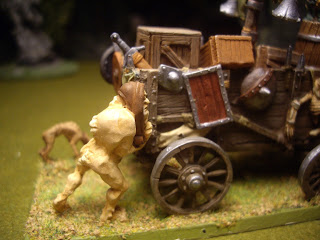 Another view of the Eureka cart pusher.... 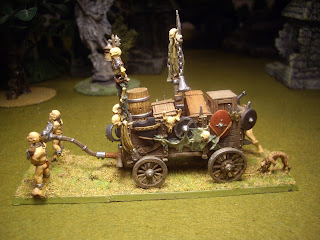 ...and of the other side of the wagon...the standard came with the RAFM wagon kit.  I added the iron bells from I think the Citadel plastic giant kit. 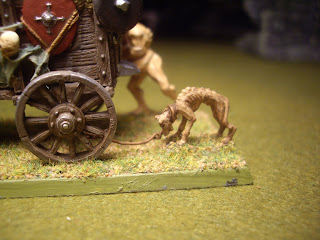 The dog is also part of the Eureka miniatures 'Chaos Army' line.  He's a nice touch.  I roped him to the axle of the wagon with a scrap of wire.  When I saw him, I immediately thought of the dog in Pieter Bruegel's The Triumph of Death. 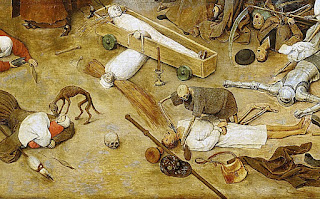 I'm not sure if the sculptor was thinking of this piece when he made the poor creature, but there's certainly a resemblance to the miserable, depressing looking beast, which is helpful when you're working with a Chaos theme. 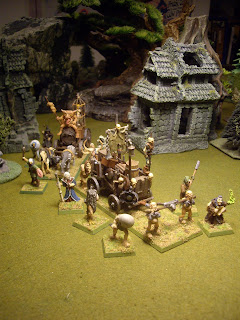 The completed baggage train.  Completed for now, anyway.  I still plan on adding quite a few points to Buzzgobb Phesterlick's Chaos horde, so there will be room for more wagons and camp followers in the future. 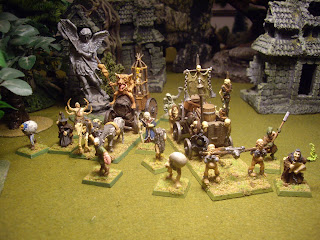 A sick and twisted but highly satisfying project to have completed.  Now I just have to finish Willie da Wheela's Goblin chariots and steel myself to repairing Big Blackie's chariot and finish painting Big Blackie himself.  Then I'll be ready for the big showdown between the two most heinous-est and evil-est hordes in The Black River country! 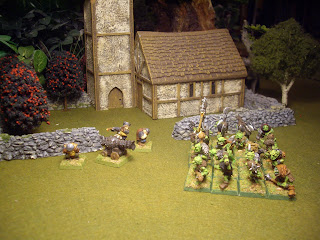 Brave Dwarven Engineers of the Thunder Mountain colony prepare to drown Oogie Spazzjabber and his Gobbos in a miniature lake of liquid fire...if they don't blow themselves up instead! 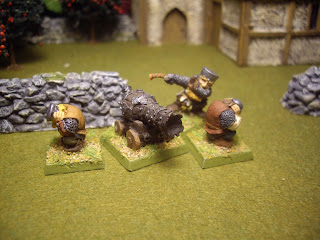 I can remember not liking this model way back in my twenties and swearing I'd never own it.  I thought it looked too silly and not dignified enough for Dwarves.  Over the years I've lightened up a bit and now I like it. 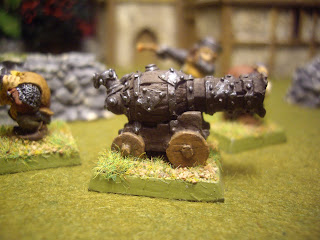 The improvised, ramshackle look of the thing is appealing to me now, It has a humble, slightly comical, yet still menacing look to it, sort of like a Trojan pot-bellied pig. 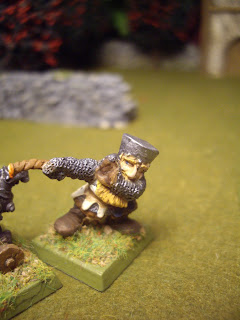 And the crew figures are great...cringing desperately as though certain the blasted thing is going to blow up and kill them... 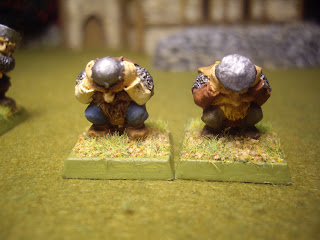 ...yet they're gamely sticking to their posts, as if the horrible risk they're taking will be totally worth it if they get to cook a big batch of Gobbos or Clan Rats in a hellish blast of naptha. I'm glad I changed my mind about this model and I'm keen to try it out on some Goblins soon.   I still draw the line at some things, though. Example: I will NEVER own an Empire Steam Tank or a Hot Pot Catapult.