O is for Otyugh 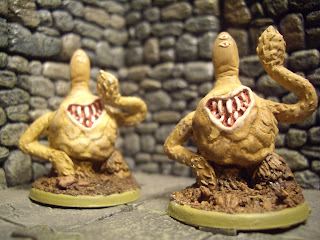 The fact that refuse, carcasses and other waste left lying about can harbor diseases of every sort is not one which is well understood by the peoples of the Western Kingdoms.  That such refuse can attract Ghouls, Giant Rats and other, more visible agents of misery is VERY well understood, and it is for the purposes of discouraging such  unwanted company that the Western Folk carefully burn or bury their leavings.  Monsters tend to be less interested in taking such precautions, and the great, stinking garbage pits and putrid cesspools in and around the Caves of Chaos are well known to be havens for whole colonies of such creatures. 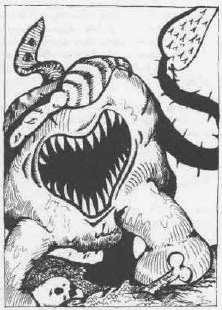 Amoung the most feared of such monsters are the Otyugh.  Thankfully, the relatively fastidious Human and Demi-Human communities of the West rarely encounter these weird and ravenous beasts, though the occasional rogue Otyugh crowded out of it's feeding grounds near the Caves will sometimes wander through a town, leaving chaos, misery and a very bad odor in it's wake... 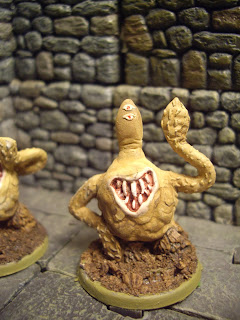 I've recovered most of the strength in my hand, but still have my hard cast on, which makes it impossible to do any detailed painting.   On the other, erm...hand...I've discovered that I can at least work on washes and dry-brushing, so I've decided to try simple and very small scale projects for a while, mainly D&D monsters that don't have fiddly details.  The Otyughs here are my first attempt to get back into hobbying mode.  Might try to get a few tanks for Flames of War painted soon, too. Used a lot of  FOW colors on Mr. and Mrs. Otyugh, here, and in spite of the frustration that goes along with not being able to move my wrist and having to steady my weak, girly, trembly right hand with my more functional left one, I had fun with them.  Got to love a monster that lives in a cesspool.  Probably need  to re-paint the rims of the bases, though.  The FOW German Middlestone looks a lot more green against the grey of the dungeon floor than I thought it would. 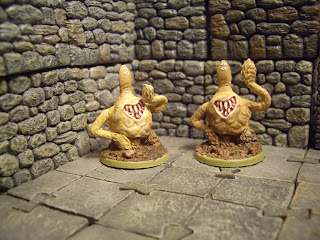 Mr. and Mrs. Otyugh wish everyone a merry Christmas and a crappy new year!

(Remember, to them crap is a good thing.)