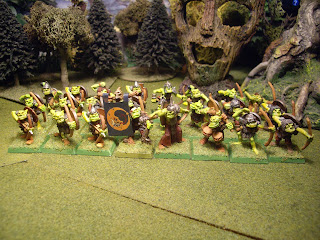 He came swimming up slowly from out of a deep slumber.  The room and the bed seemed unfamiliar to him, and waking, he wondered for a moment where he was.  Then he remembered.  The tiny cabin in the little fort on the bank of the river, built in great haste under the eve of approaching winter. Miles from home.  It had been the dogs who had broken his sleep.  He could hear them moving restlessly along the walls, where the light of the dying fire did not reach, whining and huffing, their nails scrabbling at the logs near to the ground.  Hans von Hirschfeld pushed himself up on one elbow and called softly.  The two great hunting mastiffs glided to him out of the gloom.  They were visibly agitated.  And now, outside the cabin he could hear activity; his men moving about, talking in low tones.    Von Hircshfeld  rose and dressed quickly.  Behind him his Bretonnian mistress sat up in bed and squinted at him for a moment in puzzlement, then as suddenly retreated into the soft shelter of their blankets and sweet oblivion of sleep.

Buckling on his sword belt, von Hirshfeld opened the cabin door and came face to face with Johann, his Corporal of the Guard.  "Sir, Johann said softly. I was coming to wake you. One of the sentries heard something and called stand to."
"Heard what?" Hirschfeld queried.
"Metal on metal, and a voice, in the trees opposite the gate."
"Who?"  von Hirschfeld queried again.
"Soderson, Sir."
Pieter Soderson.  A good man.  Trusty.  Not one to go jumping at night-birds.
Von Hircshfeld made his way across the diminutive courtyard to where the little fort's crude door hung on it's ill-fitting iron hinges.  A few men were gathered there in the light of a guttering torch.  They made their obeisances at his approach.  One of them was Soderson.

"On my life, I heard it, Lord.  said Soderson upon being questioned.  They're quiet as shadows now, but they're out there."  Von Hirshfeld's dogs seemed to agree.  They swept their muzzles along the ground near the gate and pushed them high in the air, scenting, listening, hackles high, eyes aglow in the dark. 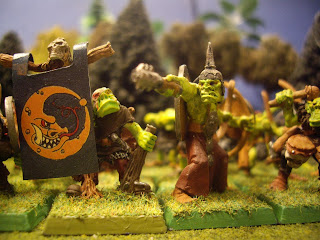 And who are they?  Von Hirschfeld wondered silently to himself.  No sooner had he finished his thought then they all heard a sound, a tiny sound they might well have missed in the light of day, but one which sounded like a cannon shot to their straining ears, a soft slap or a snap, as it might be a bough that had been pushed forward and then slapped back into a tree trunk or into somebody's eye.  There was a grunt and a muffled curse.

Hans von Hirschfeld drew himself up and shouted as loud as he could.

"Who trespasses in the lands of the Baron von Refn??!!  Make yourselves known, or should we see you, we'll shoot!!"

His voice rang loud under the still and silent boughs.  It was a black and breathless night.  No moon, and not a whisper of wind.  And the real dark of the forest night...Von Hirschfeld doubted himself for a moment, wondering if he'd made the challenge too soon.  In the shadows, images threw themselves up before his idle eyes.  The little village of Frog Hollow, the Tilean immigrants...burning houses...dead women, dead children...not just dead, but ripped asunder by unclean horrors from across the river, torn clothes and fleshy tatters hanging from the trees...The Baron had stayed at Frog Hollow to personally supervise it's reconstruction.  But he had sent Von Hirschfeld on east, to build a little outpost on the river's edge.  And here he was.  Himself, ten retainers, his page, Rolli, and three of the Baron's own men, stout swordsmen all.  Fifteen men.  Fifteen men against the wilderness.  Von Hirschfeld's imagination peopled the darkness outside the fort with horrors...had they come back, the Mad Hunt?  Or some other nightmare servants of the Chaos Lord Buzzgobb Phesterlick?  His heart beat slowly.  The echoes of his voice faded. 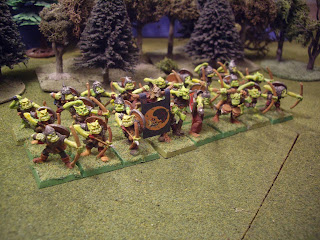 A harsh, cracked voice called out, at last, in response.  "Oh, it's Baron Yar-Yar's country, is it?  I call this our country!  We wuz here afore you, I think."

Hans von Hirschfeld breathed a little easier.  Orcs, then.  Tough customers, to be sure.  But right now, anything seemed preferable to misshapen horrors from out of Lost Veguzz.  At least he knew what he was up against.

"You are confused, I think, in your geography, he called out.  The west bank is my Lord, The Baron's country, whatever foul ancestor of yours may have laid claim to it in elder days."

There was a cacophony of hideous laughter amoung the twisted bowels of the trees, a chorus of harsh, gravelly cackles, raspings and croakings.  Von Hirschfeld tried to count the voices amoung the echoes.

"'Ere, now! came a deeper voice, and closer than the others, from just beyond the gate.  You can sit in dere all night n' say it's your boss as runs dis land.  But who's hidin' behind walls like a scared rabbit in a thorn bush, eh?  And who owns da night all round ya?  Ere!  Boss Humie!  Listen up!  I like this little hut you got.  Tell you wut....you...you take your lads and march on out, right?  Tonight.  You can take yer weppons and yer gear and such...that's jest to show you you got no needs ta worry...and we'll let you go and leave ya be.  But leave us the hut and all the grub and sich as you got where it is.  An ya can keep yer heads.  An that's that.  Can't say fairer than that eh? Eh?  Anyhow I got a hundurd lads out here, so way I see it, my way's the only way you're ever gettin' out.  Whaddaya says, eh?" 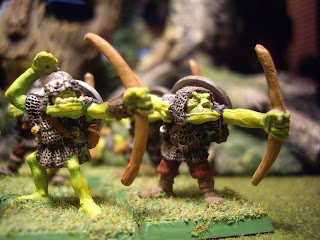 In the dim yellow light of the torch, faces turned to look at Hans von Hirschfeld.  Some fearful, some confident, some smirking in their contempt for the greenskin's offer.  From out of the dark, the boy Rolli appeared with his arms full of Von Hirschfeld's armor.  With the help of some of the men near the gate, he began to array his master for battle.

"I believe you to be somewhat impaired in your understanding of our ways!  called von Hirschfeld over the gate.  You see, my Lord has tasked me with the defense of this fort, and until he commands otherwise, I will not budge from it.  Nor think you that you can pass us by and go west looking for gentler folk to rob and murder, for as soon as you are gone we will track you, and ours is not the only stronghold you'll find in your path. If you go further west you'll have foes to your front and foes behind and soon come to grief.  If you desire this fort so much, by all means, come and try to take it, but I'd advise against it.  I've got twenty fighters in here, which is about as many as you've got, unless I miss my guess.  There's nothing for you here but strong walls and hard knocks.  Best you go back across the river, where you belong!" 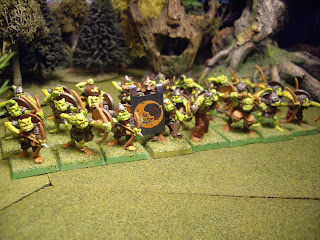 Silence, for a moment, from amoung the trees.  Then:

"Nar!  You can't squeeze twenty lads into that bitty little shack!  Anyway, I knows ya - you're the Red Hind chief.  We met in the little scrap on Bad Moon Rise, I fink you remember it...I put one a my arrers in ya in dat fight...'An I know you always travel with the same ten crossbow boys.  So ten's all you got!"  Orcs had difficulty speaking the language of the Black River folk, and found their names altogether un-pronouncable.  Therefore they often referred to individual knights by their heraldic devices.  The Von Hirschfeld insignia was a scarlet stag's head.  Clearly, the Orc chief understood the speech of his enemies well enough to use the feminine of the word for deer as a deliberate insult.

"Ten of my men and ten of the Baron's!"  Von Hirschfeld insisted untruthfully, while Rolli struggled to get his master's greaves on.  "But you needn't take my word for it. Come in and see for yourself, foul Narchukk Tounge-Cutter, as I know you, now, to be...and we'll settle old accounts!"

In the deep shadow under night-clad pine and oak, Narchukk Tounge Cutter sat glaring at the fort and weighing the odds.  He had twenty...twenty...um...well, two tens and three besides, he thought...so, twenty...hrm...and some.  The humies?  Ten.  Maybe twelve.  Had to be.  The teeny little stronghold couldn't take no more...but then...humies was pretty small.  "'Ere! Zuggum!"  Narchukk's faithful drummer, Zuggum Frog-lip clambered over the tree-roots to his master.  Zuggum!  How many you fink dey got in dere?"
Zuggum thrust his moist, cavernous nostrils into the night air and inhaled deeply.  "Hrm...more n' ten, boss...maybe twelve...and a humie wolf...at least one...maybe two...or free..." 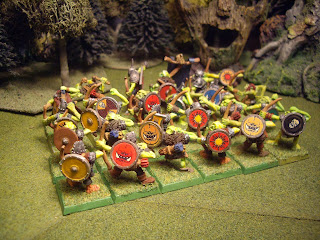 Narchukk chewed his broad green lip frantically.  He had more boys, but the humies had walls...and man-wolves.  Still, the advantage might fall to him...funny thing about humies...unlike Elves and Dwarves and Orcs, they couldn't see well in the dark.  An' Orcs was tougher than Humies...everybody knew that...well, it certainly seemed like it could work...and anyway, he couldn't back down now...he had led his lads out into the dark waters of the Black River...Orcs hated water...on a tiny flotilla of leaky log rafts, braving currents and deep water and that Gods-awful big monster-fish-snake-thing that had gone rolling by them in big, hump-coils...brr!  They had come all this way to get in a fight and nab some sweet loot.  And they had trusted him to lead them to it.  He couldn't back down now.  It might be a hard fight ahead, but that was all good...all they had to do was win!

Suddenly Zuggum Frog-Lip began to pound out a frantic, mindless call-to-carnage on his drum...it was a beat he called "Napalm Death".  He didn't know why he called it that...it just sounded good...but it jarred a deep, warlike chord in the Orc boys gathered around the fort.  The blood began to pound in their thick skulls and arrows whistled and sputtered out of the dark, sticking in the log walls of the little stronghold on the banks of the Black River. 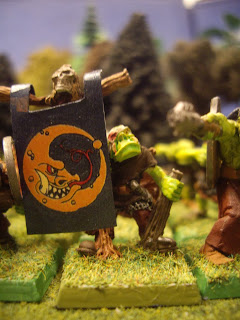 "Here, we go, boys!"  shouted Narchukk Tounge-Cutter to his lads.