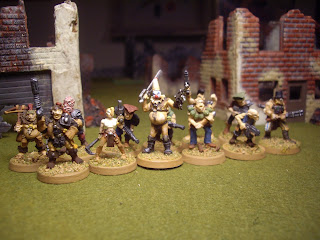 Capabilities:
Appearances to the contrary, Captain CCC possesses an astonishing charisma and a deft manipulativeness and a profound grasp of human motivations.  Add to this an extraordinary ruthlessness and cunning, and a natural-born talent for extreme violence.  At a tender age embarked on a criminal career more successful than any in the last few centuries of the history of Geminion Secundus.  Eluded all attempts at capture by the Voldraddi  authorities for over twenty years.  Eventually established a lucrative and pervasive criminal empire which came to be quietly tolerated and even frequently patronized by influential members of the administration. Controls an army of thugs, enforcers and criminal militia numbering in the tens of thousands.

Equipment:
In recent sightings has carried a stub pistol and a power sword of exquisite workmanship with no obvious external power source.  Is rumored to have an Eldar Harlequin flip belt cunningly integrated into his leather harness.  Certainly there is no other likely explanation for his superhuman agility.  Known to sometimes wear Jokaero digital weapons.  Has a fondness for grenades, especially exotic types.

Comments:
Heretofore The Chapter has maintained a neutral stance vis a vis The Clown and his activities, as it was believed that the existence of The Clown's Criminal Empire exercised a destabilizing influence on the Rebel regime's control of the planet of Geminion Secundus and would indirectly contribute to our ongoing campaign to topple the Rebels there. As is now well known, however, in a recent raid on enemy facilities in the slum city of Golgatha X, three squads of the third company came under direct attack from a horde of well armed gutter trash led by The Clown himself, and in the ensuing   firefight, two battle brothers of the Third Comapny were killed and others wounded. It is now known that The Clown and his servants believed our expedition to be an exercise in violation of their territory.
The very notion that the The Clown believes he owns territory should itself be offensive to all our Marines.  The Clown does not get territory.  Only the Emperor has territory, and  we are the sentinels of that Emperor.  The Clown has struck the sons of the Emperor.  The Clown will die.  Let him be beheaded with a dull chainsword.
-Ripp Von Venkle, Master of the Chapter
Dead Men Space Marines 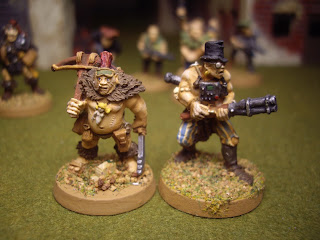 Although most gangers are eventually well armed and equipped by their masters, all new recruits to Clownie's gang have to go through a probationary period where they are expected to supply their own weapons.  These two initiates have tried to exaggerate their barbaric appearance to look less like new meat, but their crude, home-made arms betray their junior status within the gang.  Nice Mark Copplestone Future Warriors.