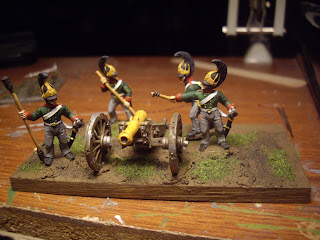 After a long and exhausting winter, its nice to see green grass and leaves popping on the trees again.  Yay, Spring!  The family business slows down at this time of year, so there's time to relax a bit and do things like sleep and paint, assuming I can get permission to do so from my son! There's also Enfilade!! I was invited to attend this convention by a fellow Guardsman on the way home from Afghanistan last year, and had a blast. 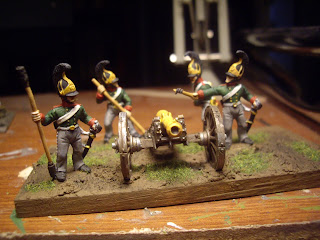 The two most memorable games I got to play were Napoleonics, one of which was Doug Hamm's Waterloo anniversary game, using his own set of rules.  We fought out Napoleon's nemesis a couple of times, and it was a riot.  This year Doug is putting on a Borodino game and I'm painting up some Russians for it.
My troops are the two tiny corps of cavalry commanded by Generals Korff and Kreutz, whose separate commands we are treating as a single corps for game purposes.  Here, as you can see, is my stand of horse artillery figures, all by Front Rank miniatures. 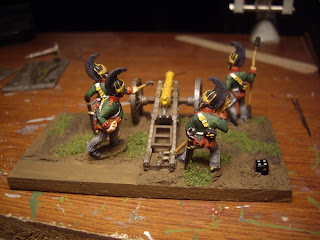 Doug's rules use his own basing system, and he is something of an iron fisted tyrant when it comes to making sure the bases are uniform.  Iron fisted tyranny is not always a bad thing, and in this case it is indeed very appropriate and useful, because several different players will be painting and bringing their own troops to the game.  Standardizing the appearance of the bases helps keep the game from developing that gypsy camp look and makes us all happier at the end of the day.
One thing that stands out about the bases to me is how thick they are.  (1/4 inch!)  Your guys end up standing pretty high above the game table and don't blend in very well with the turf, but the thick bases are easy to grasp and move around and help you to avoid doing something really embarrassing, like fumbling a heavy base of metal artillery figures onto another guy's infantry.
The flat spot in the lower left hand corner of the base is for a unit designation label.  The tiny die on the lower right hand corner of the base shows the relative strength of the unit.  A unit whose die shows a six is at or near establishment strength, while a unit reduced to one has been nearly wiped out.  The dice goes in the lower right hand corner because most of us are right handed.  It's all very well thought out.
Speaking of thins being well thought out...Garn!  I forgot to edge the base in black.  Knew I forgot something.  I'll have to fix that. 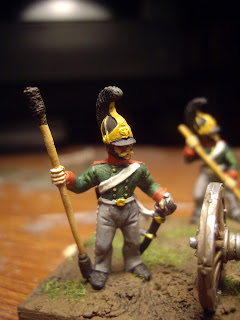 I still have 2 stands of Hussars and two stands of Dragoons to finish my corps.  Those should be showing up on the old blog pretty soon, and in May we'll ride off to defend mother Russia.  Last year I forgot my camera, (typical!) so I didn't get any pictures of the many beautiful games that were being run at Enfilade.  This year I won't screw up.  Expect to see some pictures of our battle here sometime early in June!
Posted by Mouse at 10:56 AM