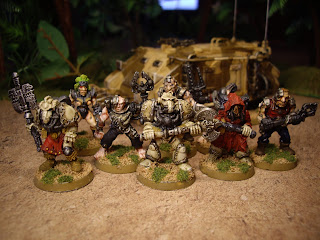 Adeptus Mechanicus Section, 3rd Company, 9th Nepenthe Imperial Guard Regiment prepares to move out in support of their unit during the fighting against Gnummschkull Terdlipp's Orks on Far-go, around The Year of Our Emperor 39470. 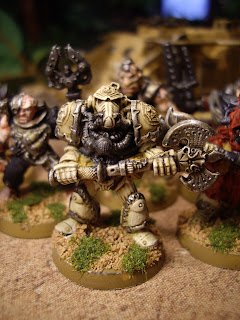 A strong Adeptus Mechanicus contingent is key to the success of any Imperial Guard formation, for without the skills of the Adepts and their servitors, most of the unit's heavy weapons would soon become unserviceable. 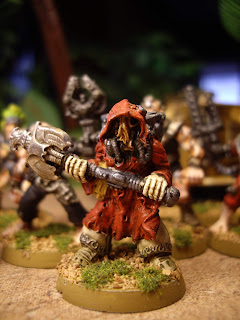 The original 40k Imperial Guard army list permits up to d6 Adepts.  Very useful for fixing broken stuff and necessary for controlling penal troops.  They can also act as spotters for off-table artillery support.  I've included three in my army.  I suppose that's more I'll ever need, but the figures are so interesting, like Mr. deeply disturbing vagina face here... 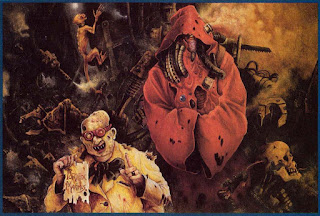 ...who closely resembles the figure in John Blanche's painting from the Rogue Trader rule book.  I always love it when a mini matches up with something in the rule books. 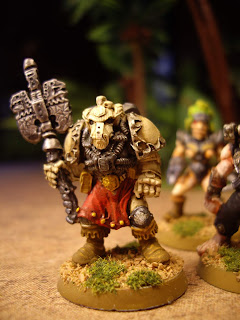 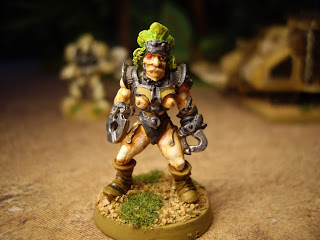 The army list also allows up to 3 servitors per Adept.  Again, the minis are so fun that I ended up buying more than I'll probably ever need, 6 in fact.  But I suppose they could also be useful as 'civilian' models in story-driven games.  The mini above reminded me of the 'test bed slave' character from the rule book, so I painted her in similar fashion. 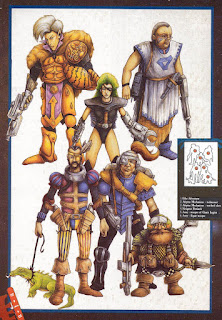 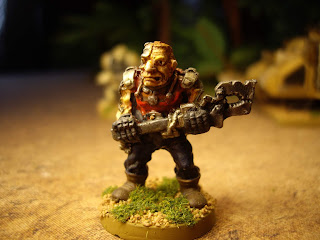 Wrench guy here came out pretty nice.  Bob Olley sculpted all the figures in this post except the two in the photo below and he was really on his game with all of these. 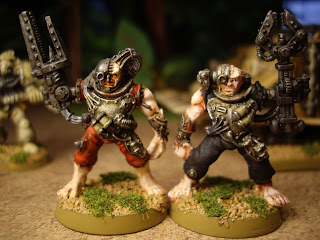 These fellows came out after the release of 40k 2nd edition, I believe, but I've always had a soft spot for them.  They came out ok for the most part, but once again the eyes were my downfall. 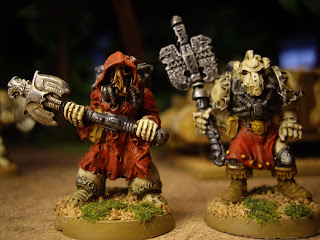 'We shall ease the machine's pain!' 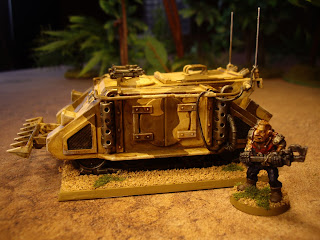 The army list requires that some mode of transport be provided for an Adeptus Mechanicus section, and I was happy to comply.  I gave them this old school Rhino painted in a desert camo scheme.  I still painted a few bits bare metal.  Not very realistic, but it gives the rig a little more flavor, I think. 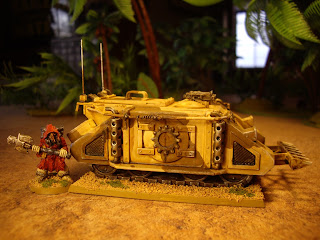 "This able beast shall get us there!" 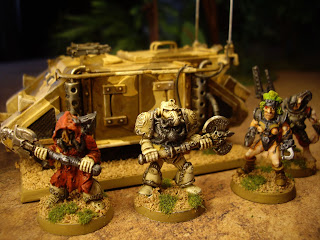 So that's that.  I still want a 2nd platoon, an HQ section and commissariat, and a rapier multi laser battery for the company, and a squad or two of penal troopers with a couple of human bombs.  If I can ever get all that together, I'll happily call my Imperial Guard company done.
Posted by Mouse at 1:53 PM