Knights of the Mittelmark Pt 4: Even more Bretonnians/Imperials 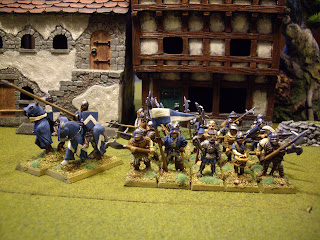 Every year as winter approaches, I find myself thinking:  "Oh, boy!  Lots of cold dark afternoons and evenings with nothing to do but stay inside and paint!  I'm going to get SO much done!"  It never happens.  Vitaimin D deficiency and general weariness and ennui ensure that I spend almost all my spare winter hours draped lifelessly over various bits of furniture, floppy and useless as a boneless chicken.  Arrgh. 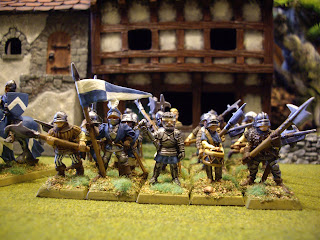 Still, one must keep plugging away until life and sunlight return.  I've been trying hard to concentrate on finishing my unisex Warhammer humans army.  I conceived the army as a blend of Bretonnian and Empire stylings, but its looking more and more Bretonnian as time goes by.  Anyway, here are my two latest knights and the twenty fighting men which the Prinz von Refn requires they bring to battle with them when called. 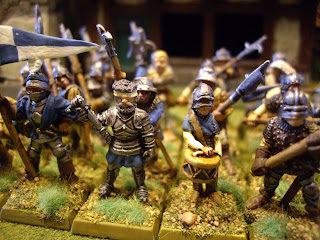 The leader of this tough regiment is one Jan Slitsya, a priest and tutor to the children of one of the knights.  Though blind, Slitsya insists on leading his master's retainers into battle, and his apparently aimless strokes have an uncanny way of always finding a home in somebody's skull or shoulder...  Divine guidance, perhaps?  His magic war hammer inflicts dreadful wounds, and the Orcs and goblins of the Black River country fear him greatly, believing him to be possessed by daemons or worse. 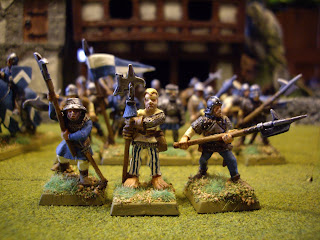 Again I painted the infantry in colors to match the knights.  My original plan for the army was that every infantry guy would have a shield which would match his knight's coat of arms, so you would be able to pick up any trooper in the army and match him to a knight somewhere.  My ambition on that point has cooled somewhat...I've now accepted that a lot of the retainers won't have shields...and some of the knights probably won't have retainers...but I'm going to continue color-coordinating units with certain knights' coats of arms because I think it looks good and it's fun.  Notice I've sort of given up on painting eyes with these guys.  It's just not possible anymore, not until I break down and get a pair of readers, anyway.  Man, once your eyes start to go, they go fast.  Rejoice, O man, in thy youth. 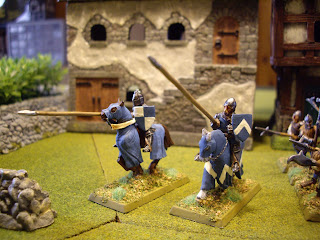 The two knights...used the same color scheme on them so that their infantry would have a nice, uniform feel.  Once they are mixed in with all their knightly buddies, their identical color scheme won't look so odd. 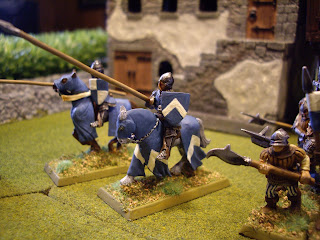 Repeated the chevron design on the shield fore and aft on the caparison.  I think it looks pretty good. 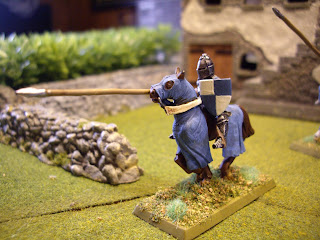 I originally planned to repeat the shield design on this fellow's caparison as well, but I  the end I thought he looked ok as he was and decided not to press my luck. 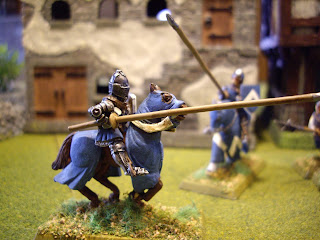 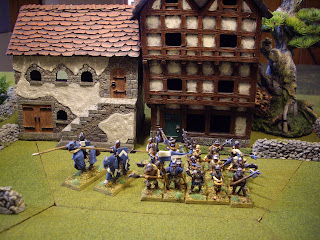 Off to battle.  When I was finished with these guys I yarded out all my Warhammery humans and was startled at how many I had.  I have a lot.  I actually have all the infantry I need for a strong army.  What's missing are characters, artillery and of course, I need more knights, especially if I am using the Bretonnian army list.  So time to try to get on with some of that!  Perhaps a clutch of spell caster types next?
Posted by Mouse at 7:05 PM