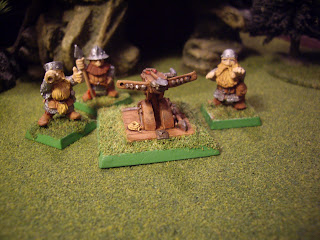 Named 'Jenni' for the sweetheart of the dwarf who built it, and 'Troll Spitter' for a spectacular shot which bisected the wind-pipe of the troll chief Mugwump Worm-Belly at the thirteenth battle of the Maiden's Peak, this Bolt Thrower is a fine example of the several heavy crossbows in use by the Dwarves of the Thunder Mount. 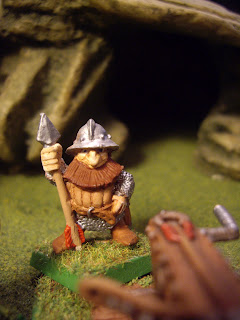 Although not as effective as cannon or stone throwers, these weapons are easy to break down and can be transported on the backs of a pair of mules, making them deployable at short notice and even in the most rugged terrain.  Best employed in batteries of 3 or so machines, they can be an effective counter to large monsters or flying creatures, and highly useful as defenses of fixed fortifications. 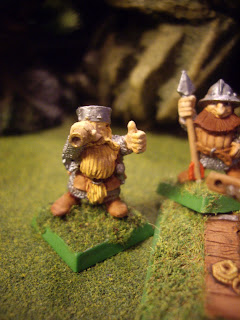 The Dwarfs are, for the most part, not one of my favorite GW figure lines.  The GW Dwarf models have always been a little too roly-poly and Disney-esque for my taste. Although some of Games Workshop's Dwarf figures from the early 80's, particularly their Norse Dwarfs, are quite pleasing to me, I generally prefer a more dignified, Tolkien-esque look for my Dwarves.  In recent years Citadel has begun to use an altogether comical look for the Dwarfs, a sort of 'beards with feet' look, which I REALLY don't like.  This means I look to other manufacturers for most of my needs. (they're cheaper, anyway).  There aren't a lot of Dwarf Bolt Throwers on the market, however, and this one, which at least has the advantage of being nice and eighties, will do for my collection. 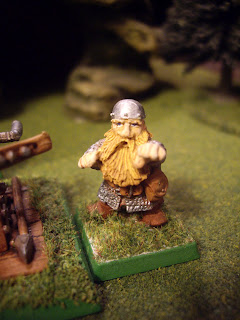 It's been a heck of a busy last few weeks, but I'm glad I had enough time to get this little set finished.  It came with a small bull dog model, which I intended to use to represent my fourth crewman, but he has disappeared...I think my wife, chronic dog lover that she is, took a liking to him and made off with him. 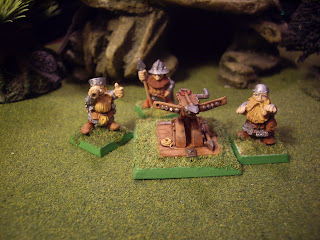