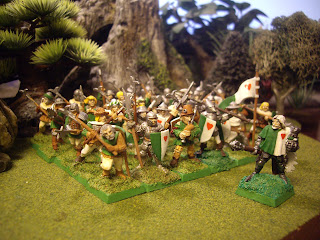 The Baron Von Refn has many resources to call upon when his realm is threatened.  His militia companies stand ready to defend their districts, and the volunteer levies will answer the call to arms when the situation is desperate.  The Rangers and Sheriffs stand watch on the borders and along the roads, and are invaluable assets in battle.  Then there are the monks and knights of the Holy orders, brave men who fly as fanatics to the defense of the realm.  And there are the men of the Baron's own household; some fifty strong...yet there could no hope for the survival of the Black River colonies, were it not for the Baron's knights and the men at their command. 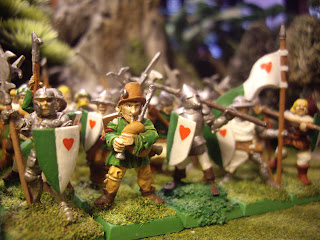 One of the most important and respected of these knights is Sir Johann Treuehardt, whose family has served the Von Refns for three generations.  Each Knight of the Realm is required to maintain a 'Marching Order' of three mounted or ten men-at-arms on foot, whom he can bring to the Baron's standard in time of strife. 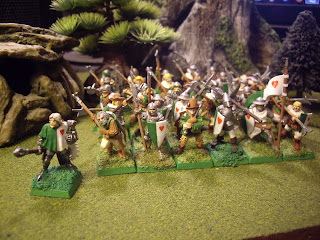 Sir Johann, however, proudly maintains a full company of thirty halberdiers and billmen, well paid and loyal fighters always ready to move to a fight at a moment's notice.  Cynics will say that the wealthy Sir Johann needs the extra men-at-arms to watch and guard his extensive lands in the Mittel March anyway, but this does not diminish his high standing with the Baron... 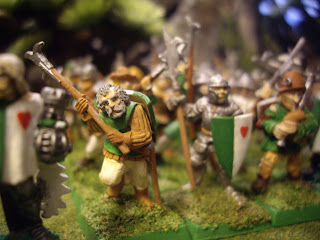 I copied the green and white color scheme for this regiment from a unit of Bretonnian men at arms featured in a Rogue Trader era issue of White Dwarf.  (Around #140, I think)  Alas, once  I had painted everybody's shirt and trousers in some combination of green and white, I came to the conclusion that the color scheme I had chosen was actually, unfortunately, really kind of boring.
The half-finished unit sat around gathering dust for a while, until I decided that a red heart taken from a bunch of 40k Eldar transfers might add a spot of color which might make the unit more interesting...so now you can all have a good laugh at my "Imperial Halberdiers of Biel-Tan". 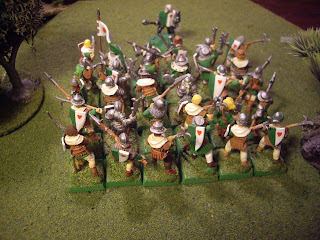 The Halberdiers can't use thier shields in close combat, but they can be of use in protecting the troops from missile fire as they advance upon the enemy...so I have a lot of the boys with their shields slung on their backs, or shifting off their fore-arms onto their shoulders, as if they are closing with the enemy... 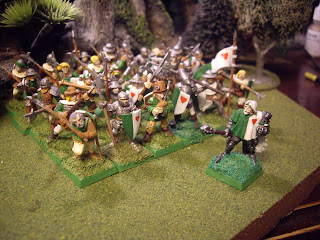 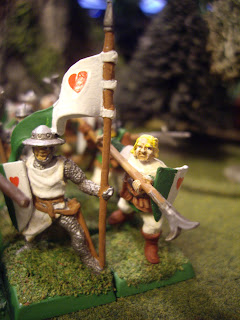 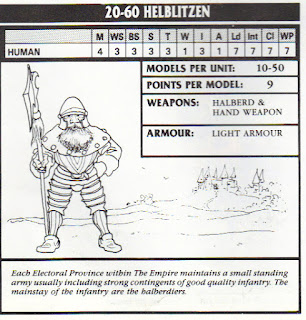