2nd Company of the Muster of the Great Hall: Marksmen, 'Red Feather Troop' 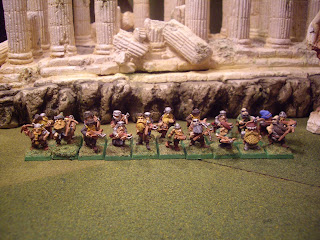 "...on the other hand, the Dwarves' companies of marksmen, both crossbowmen and gunners, do not carry standards or adopt a common color of dress.  They do not make a great show of their brotherhood, appearing almost casual in their association with their parent units.  In fact, they take their devotion to their warrior fraternities as seriously as any of the fighters in the army of Thunder Mount..." 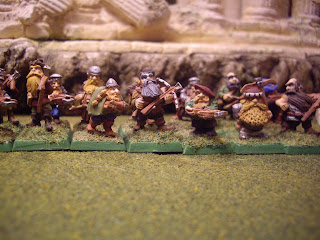 "...This apparent indifference developed out of necessity and as a product of their battlefield role.  As my friend Haakon Stahl explained to me, and as I have since had occasion to observe in battle with the Dwarves against the Goblin tribes, the marksmen break up into small groups in combat, standing in wedges in the narrow space between the tightly drawn-up Dwarven battle-companies, or working their way round the enemy's flanks. Thus companies are regularly broken up into independent teams of ten or even fewer Dwarves who may be obliged to maneuver and fight some distance from each other, often as skirmishers in broken and difficult ground through which they must move with stealth and speed. 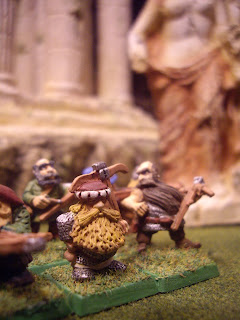 "All this makes the presence of standards and brightly colored garments among the marksmen impractical.  This does not mean that they abandon all show of unit affiliation, however.  On speaking with a stout blonde-bearded arbalesteir of one company, I learned that each troop of crossbowmen fletch their bolts with  feathers of a different color.  One company uses the azure plumage of the jay, another the obsidian dress of the crow.  The marksmen of the second company of the muster of the great hall use the scarlet feathers of the cardinal.  The act of bringing one of these small, brightly feathered birds down with a shot from his weapon is part of a recruit's rites of passage into the unit.  By observing the the color of bolt driven into a kill, a dwarf can quickly determine which company brought the enemy down, and the separate companies are fiercely competitive amoungst one another, keeping careful count of the numbers of enemies they've slain and boasting loudly about it.  Indeed, the hay-bearded marksman showed me one of his own quarrels and explained to me that each Dwarf in a company arranges his fletches in a pattern unique to himself, and this allows him to count which of the dead enemy are his own personal kills.  The number of kills a Dwarf crossbowman can count as his own is considered the true test of his marksmanship, for, as the stout trooper explained to me, it's one thing to shoot a target on a target range, and quite another to find one's mark amidst the terror and tumult of the bloody  field..." 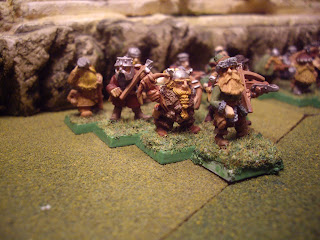 It's common enough for me to sit down with my crumbling old copy of Warhammer Armies and pencil out an army I'd like to field.  It's considerably more rare and pleasant to draw up an army knowing that I have all the painted troops I need for it!  These marksmen are the last troops I needed to complete my 2,000 point Oldhammer Dwarf Army.  Woo Hoo! 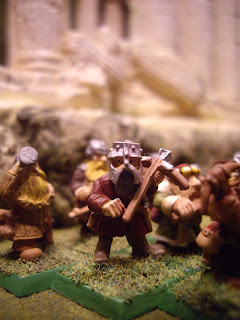 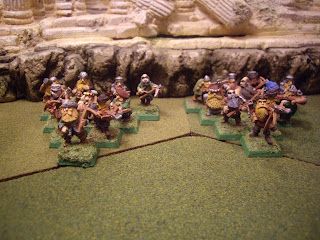 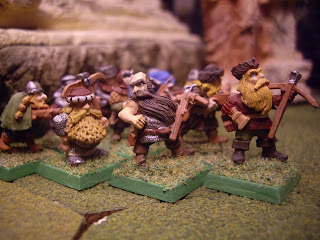 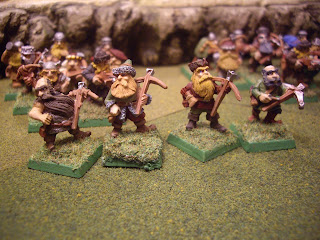 My favorite figures in the unit by far are these Old Glory fellows...I love the Swedish Viking/Russian look to their clothes and gear and the cocky  "Yeah. We're veterans."  attitude that comes through in their poses...
Posted by Mouse at 9:36 PM