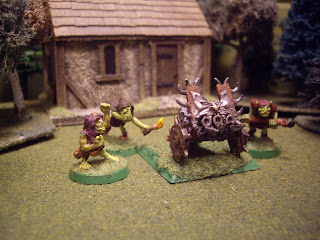 This dreadful weapon appeared on the battlefields of the Black River country some years ago, and has been wreaking havoc in the ranks of Men, Dwarves and Chaos servants alike ever since.  How the wretched and degenerate goblins came by it is still unknown, as they lack the intellect to design and assemble such a thing themselves. 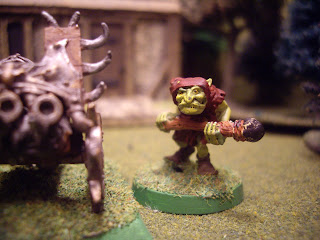 The Orc Warlord Big Blackie clearly understands its worth, however, and invariably surrounds it with troops of tough Orc and Goblin infantry, so that it has eluded several attempts to seize it in battle, and at least two expeditions by the Rangers and the Dwarf Slayers of Snorri Headbiter to capture or destroy it. 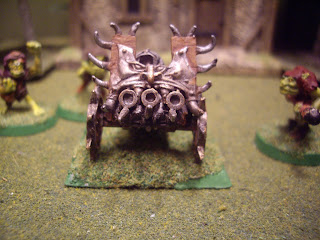 Several theories exist as to how the 'Lead Belcher,' as the Goblins call this terrible organ gun, more fearsome than anything in the Baron's own arsenal, might have come into the hands of the Goblins.  One is that 'Lead Belcher' was captured by them from the Dwarves of Thunder Mount, and twisted and re-sculpted to fit their own foul tastes evil purposes.  If this is true, however, the Dwarves aren't admitting to it.   Another is that the weapon was built for the Goblins by the Renegade Chaos Dwarves known to reside in the Chaos Lord Buzzgobb Phesterlick's squalid encampment at Lost Veguzz.  Certainly these twisted parodies of the noble Dwarves of Thunder Mount have been known to use gunpowder weapons, and Lead Belcher shows the stamp of their workmanship, with its grotesque baroque carvings, but the reason why the Chaos Dwarves would surrender such a potent machinery of destruction to the Goblin can only be guessed at. 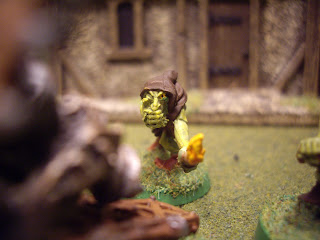 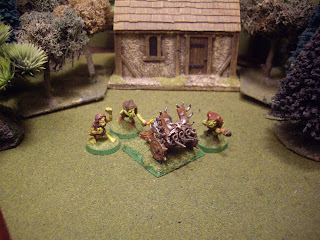 Whatever the weapon's origin, it's destruction remains a top priority for the men and Dwarves of the Black River Country...
Posted by Mouse at 9:55 PM