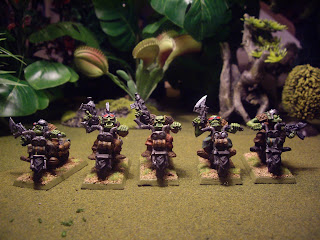 Orks on motorcycles.  A great idea on the part of Games Workshop.  Sadly, the concept wasn't as well realized as it could have been.  When I think of Orks on bikes I think of all those goofy, cheesy 60s biker movies that you used to see on Mystery science Theater 3,000.  I think of the doped up rabbit biker sequence from Fritz the Cat. That's the kind of spirit I'd like to see captured in Ork bikers models; crazy, anarchic, violent, stupid, and everybody probably high as kites on God knows what. 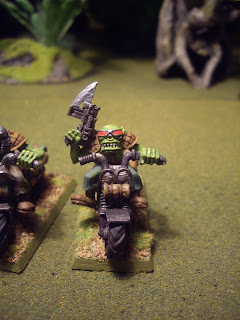 That's what should have been, but the old Rogue Trader biker models didn't really deliver on that, not for me anyway, so I swapped some parts around and puttied and glued until I had something I liked better.  I always hated the Ork bikes with the big cannons on the sides...not really believable at all, and you wouldn't really need 'em to have a scary Orky bike anyway.  In my twisted imagination, I saw Ork Nobs driving one-handed though the smoke and dust of battle,  hurling armfuls of stikk bombs and blazing away with kustom bolters fitted with shoulder stocks to help the Nobs' aim when shooting on the move.  Maybe one would have a grenade launcher he could use to lay smoke to cover the mob's assault.  The WW2 German regalia favored by some of the bikers in these old movies would provide a visual link to the Afrika Korps concept I had already laid down with the other models.  That's what I figured, anyway. 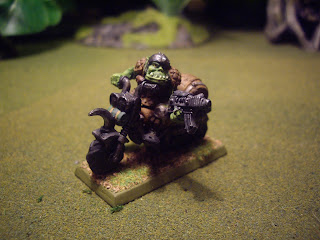 My conversion skills fit neatly into the lame category. So I just did the best I could with my nobz here. 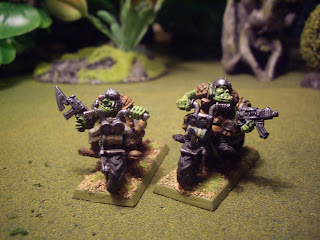 There wasn't much I could find to add in the way of WW2 German paraphernalia, so they don't fit into Der Afrikorkorps as smoothly as I'd like, but I have plans to add a motorcycle-sidecar combo to the squad as well as a boss nob who will look more the part.  That will help my bikers fit in better. 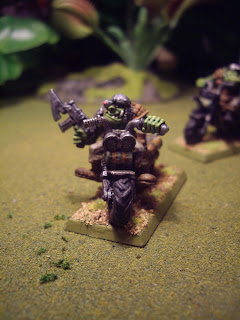 Some of the original riders did fit in, but they were much too puny, as was the case with all vehicle crew figures made at that time, so I'm trying to think of other things I can do with them. 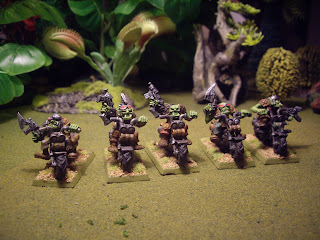 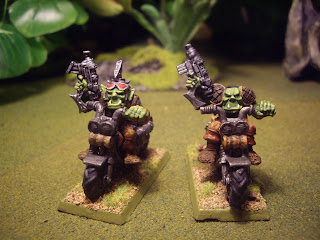 If I can ever get the bike combination and the Biker Boss Nob done, that'll be it for the Afrikorkorps, I think.  I haven't even laid hands on the models I'll need to make them, so they're still pretty far off in the future.  I want to move on to other Orky stuff now. 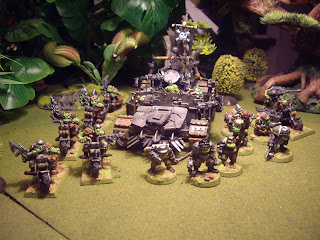