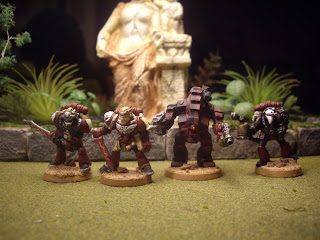 Beneath my hand, a door of steel.  How thick?  A foot?  Two?  On the other side, passages to the upper world...ramps, stairs that should bear me up once more into the world of undying light could I but reach them.  But the door is shut.  And there is no other exit from this, my tomb.   I am not yet dead, yet truly I am a dead man.  All that remains is for my food and water to expire, and then will come an end.

I am still deep in researching the history and customs of the Dead Men Space Marines Chapter for you.  Shown within this set of datafaxes are two Librarians of the chapter and a Cataphract battle robot. 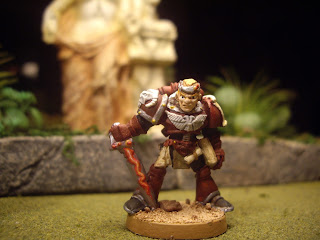 Attached here, please find a datafax image of the great Librarian Henc Morgunn.  Morgunn seems to have been a pivotal figure from the days of Battle Group Omega, and his name is still spoken with awe and reverence by all Dead Men.  It is from the writings of Librarian Morgunn and the great Chaplain Willym Pil Grimm that many of the doctrines of the Dead Men were formulated.  Morgunn is chiefly remembered now for a last stand made on a bridge against a horde of Space Orks amid the ruins of the first colony on Geminion Prime.  The image of the Great Librarian making his lone stand on a narrow bridge against impossible odds in order to buy time to allow settlers to escape is often repeated in the art and iconography of the Chapter. 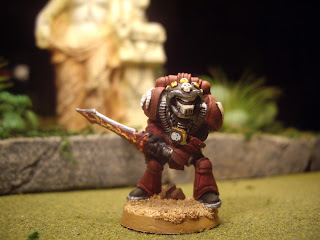 Another, unnamed Librarian who often appears in photographs and datafaxes with Henc Morgunn.  The skeletal hand on his left shoulder plate and the skull on his visor mark him as having likely been a Librarian of The Death Eaters Space Marines before that chapter was dissolved and its survivors integrated into the Dead Men.  Obsolescent chapter imagery and symbols continued into the formation of the Dead Men, and this Librarian's appearance is actually not at all atypical of Dead Men Librarians of the present day. 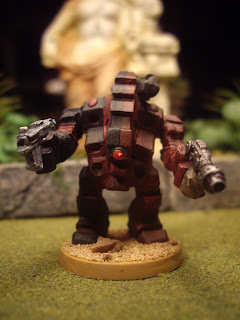 Robots were in widespread use in Battle Group Omega during the heresy and many robots remained in service with the Dead Men long afterwards.  Some were made honorary Battle Brothers.  This Cataphract robot, named "Digitus Mortis" has a history of service with the 4th company that passes well beyond living memory. 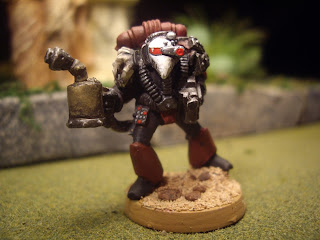 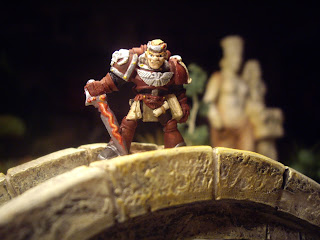 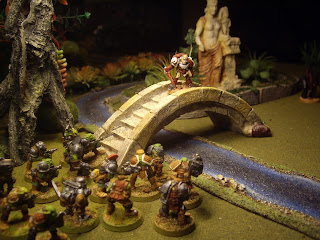 "His wrath shall consume you...greenhide scum!!"