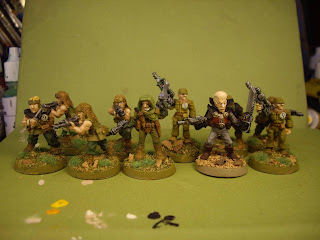 Nothing too exciting tonight....just a squad of scouts and an onion headed Psyker for my Old School
Imperial Guard Army.  I think they came out ok for the most part, but once again the eyes were my nemesis.  Oh well. Time to move on to the next thing.  Mayhap at some point I will find the strength to try and revisit the eyes. 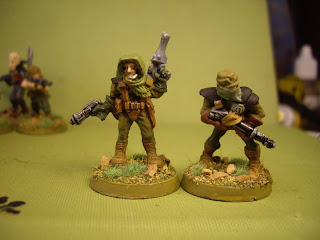 The Rogue trader era Imperial Guard army list has no scout troops per se, just Ratling Snipers and Sentinel scout walkers.  For my 9th Nepenthe Regiment unit, though, I wanted an option for some Reconnaissance infantry.  It might be that scanner technology and psychic powers have made scout troops an anachronism in the age of the Imperium but the 9th Nepenthe still relies on them to locate the enemy and guide friendly forces into position to destroy them.  Was never keen on the idea of space hobbits so no Ratlings for me.  Here the squad leader, armed with a captured shuriken catapult, leads the way forward. 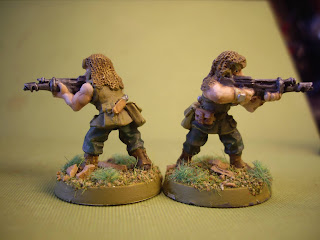 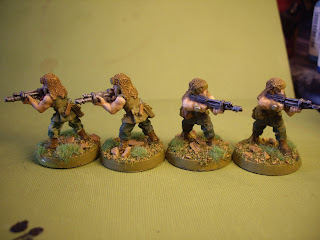 My concept for the squad was a nine man configuration with a squad leader and a pair of four man observation teams armed with las guns and led by a corporal armed with a sniper rifle. 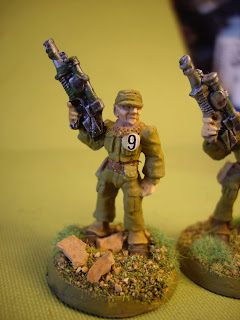 One of the Snipers...with a subdued version of the usual bright red and yellow 9th Nepenthe badge. 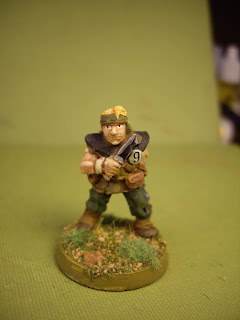 A veteran scout sneaks up on an enemy sentry with his knife... 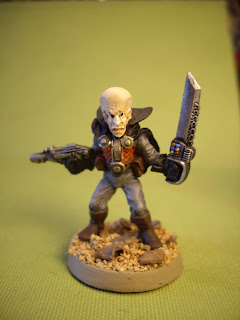 The sanctioned psyker with his enormous chainsword.  Perhaps he is accompanying this recon squad in order to lend his scrying powers to their efforts. 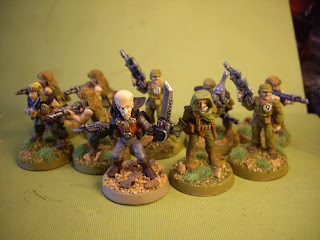 The recon team sets off in search of the Orks...good luck, lads!
Posted by Mouse at 12:26 PM