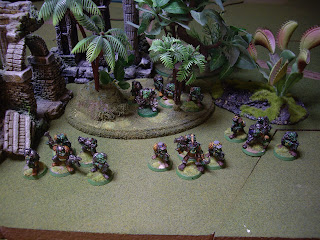 Every so often I get out my old Rogue Trader Rulebook and leaf happily through it...what a different animal Rogue Trader was from what 40k is now.  Rick Priestly essentially gave the fans some historical background and some basic rules, and then said  "Now get out there and have fun with it." 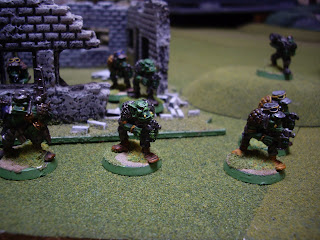 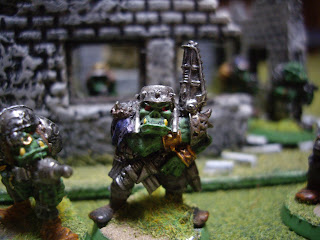 Much like Warhammer Fantasy Battle 2nd edition, Rogue Trader is a miniatures game with a strong role-playing element.  Telling a good story is at least as important as defeating your enemy.  Games are for goofing off, getting creative and having fun.  There is little or nothing in the way of tournament rules, but the book gives you all sorts of crazy scenarios you can delve into and get inspired by.  I had an opportunity to pick up a bunch of splendid Forces of the Imperium figures last week (more on them later,) and so I've been getting out my old Space Orks and Eldar Harlequins and dusting them off, brooding on writing up some little scenarios for them. 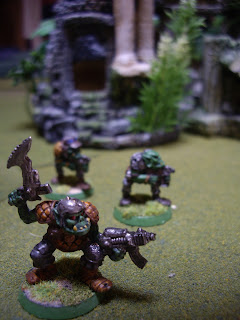 I actually bought these Orks in 2007, whilst on vacation in Iraq.  I purchased the antique SPACE ORK RAIDERS box set to give me something to do in the tent on the long days and nights between missions.  My friend Dustin noticed them sitting half-painted on my home-made shelves, and the inevitable questions and discussions followed.  I tried to warn him about the financial and psychological perils of collecting and painting armies of little Citadel warriors, but to no avail.  Dustin's interest provided the excuse I needed to do something I wanted to do anyway, and soon I had ordered the latest edition of the 40k rulebook. We spent about a month poring over it, distracted from the killing fields of Iraq by the killing fields of the far future.

Very soon, the damage was done.  Dustin's tent corner began to overflow with his company of Catachan Devils, whilst mine was soon populated with Orks and Witch Hunters.  Dustin has since gone on to infect his brother in law with the wargaming disease, and routinely leads his Catachans into battle against Straun's Necrons. 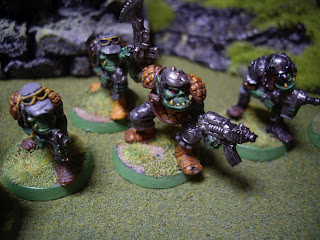 The sand on the bases of these boys is Iraqi sand from  FOB Speicher, near Tikrit.  I'm sure my bringing it home violated about a zillion regulations.  Awesome.  I wish I'd brought home a bucket of that sand.  It was fine and pale looked great, I thought.

I still like these old school boys, and use them for Trukk Boyz in my new school 40k army on the rare occasions when Dustin and I get a chance to do battle with each other again...(They're small so they fit nicely in the Trukks...) 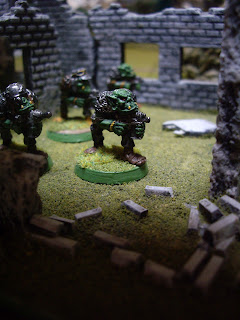 I have, as of now, about 18 of these lads.  I need a few more...I'd like to have six squads of five boys, each, ideally.  That should give me what I need to put together the scenarios I have in mind...