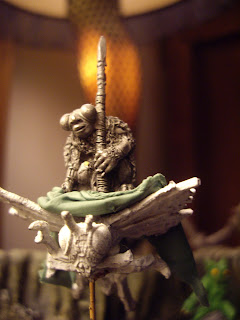 As a child, he could never keep his mind entertained with the herding of pigs nor the tending of soil, nor the thatching of roofs...useful things....but rather always he filled his fevered brain with fancies of beasts that pushed themselves above the earth, and unfolded themselves upon the breeze.  Things that were closer to the sun and stars.  Beating him did no good.  Starving him did no good.  He didn't care.  He collected feathers and broke open the bones of birds to find the secrets that helped them fly.  He caught moths and locusts and watched them leap and flutter in the candle light at night, tied on tethers he made from his own pale hair.  He sprang from tree branches and from roof-tops, and tried to catch the wind in the folds of his coat hoping he could drift away, borne up on the breeze.  He might have killed himself.  After a time, his family began to wish he would. 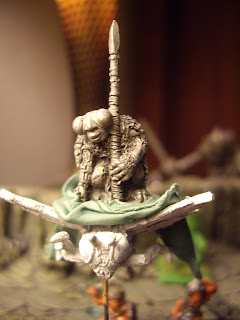 "Unsound!" The people whispered.  "Unclean!"  And they were right, he thought.  He didn't think it was his fault, but he knew that he had been made differently, and that he was of no use to them.  And such thoughts made him turn all the more, in his mind, to dreams of flying away, away, away.  That was what he had been meant to do.  It was pointless, pointless, being here.  But how to do it?  He had not been made properly for life in the village, but neither had he been made for life in the sky. 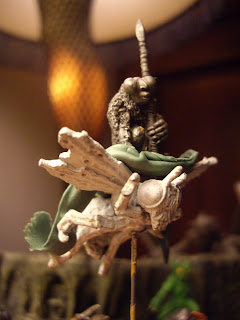 On a warm autumn afternoon, when he should have been working, he landed badly after one of his brief, impassioned flights, and dragged himself home with a swollen ankle and a broken arm.  They knew, at once, what he had been doing, that he had been shirking the harvest, and that, worst of all, he was to be more useless to them now than ever.  A cripple, a useless mouth.  They drove him out.  He had known that they would.  And he didn't blame them really.  He made his way into the woods, the pain of his arm and foot growing more and more acute as he made his slow way along.  He would have dearly liked to have climbed a tree, but it was hopeless to try in his condition.  As the trees got thicker and darker, the land tended downward, until he came at last, to the edge of a rotting morass, a swamp stinking in the high corruption of the last, lingering swelter of summer.  All around him, he could hear a wild, high-pitched whining sound.  He thought it was in his head at first, a figment conjured by his great pain, but then he saw them.

He did not know which way to go, and his pain was now so great that he simply sat and watched the flies, Darting. Hovering.  Beautiful.  Free.  They crawled all over him.  Ticlked his eyes and his nose.  Crawled inside his broken skin.  And that was when, in the dimming light of dying eyes, he saw the shadow of the great, horned bulk before him, and heard the voice of Father Nurgle for the first time. 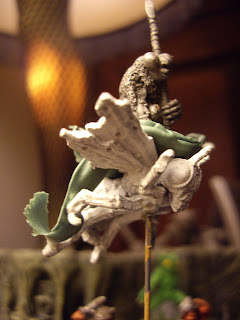 Such a tiny price to pay.  A soul.  An ephemeral thing, a wisp of mist. A bundle of desire chained by flesh and circumstance.  Father Nurgle was kind.  Father Nurgle gave him wings to bear him up, up above all of it.  A mighty steed to carry him.  The strength of a hero to swell a the slender arms of a young boy.  A terrible spear crawling with plague.  Writhing with the vengeance of Father Nurgle.

He returned, at long last.  The piercing wail of his steed's wings drove them out from under their roofs in amazement and dismay.  They looked up in wonder at him, pale faces upturned, and the gifts of Father Nurgle he sprinkled on them, from out of the folds of his cloak, and the foul breeze carried death directly into their astonished eyes.

Gifts: Mark of Nurgle, Demonic Steed, Nurgle's Rot
***
I found this very elderly Citadel Beastman on ebay and spent a pretty penny on him, though I was pleased to have him, even at the hefty price.  When he came in the mail, I was a bit dismayed at his diminutive size, and wasn't sure how I could fit him into my Chaos horde.  Ultimately the Ral Partha Plague Fly came to my aid.  The fly is missing a foot, and I'm going to have to take his antennae off, since flies, as it turns out, don't have them.  I was able to make a saddle blanket out of green stuff to to try to hide the awkward Beastman's base.  I think the conversion looks nice, and Buboe will make a fun chaos Champion or leader of a Nurgle Warband.  I just hope I don't screw up the paint job and have to start over.
Posted by Mouse at 12:05 AM