Rogue Trader Forces of the Imperium 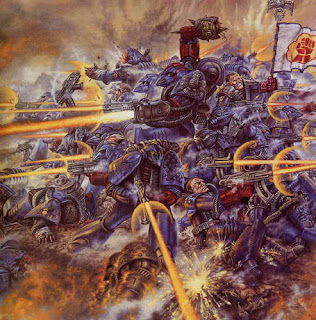 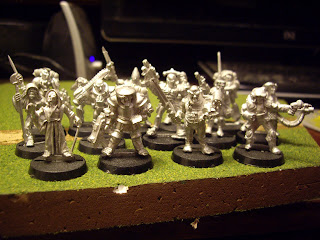 On Friday some things showed up in the mail.  Weird and wonderful things.  I picked up this delightful selection of old 40k figures on ebay last week.  I have no doubt that if the seller had not refused to ship outside the U.S. I would never have been able to afford them.  As it was, there wasn't much competition, so I got them for about $6 and change apiece.  That's still a good chunk of change for me, but well worth it.  A great deal.  Figures are all in amazing condition, unglued and unused.  Some even had little flags and tatters of molding flash on them...which makes me a tiny bit suspicious....recasts?  If they are, do I care?  Oh, well.

So.  Now that I have them, what exactly is it that I have?  And what can I do with them, game-wise?  I had to do a little bit of research at Collecting Citadel Minis but it was all part of the fun. 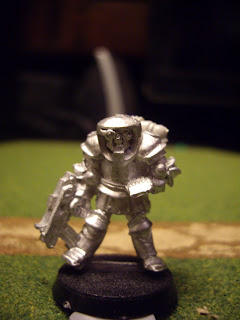 #1:  A very capable-looking fellow in power armor with bolter and scanner.  No stamp on his runner.  There is an illustration of exactly this guy in the RT40k rulebook under the Inquisitors section.  CCM lists him as having been released 3 times under 3 different names, INQUISITOR AUGUSTUS in 1988, later as MERCENARY, and finally as INQUISITOR WITH BOLTER.  Capable in any role, I'm sure. 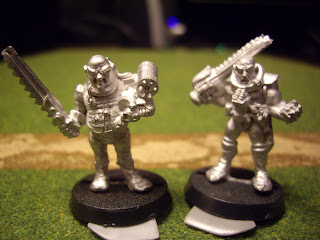 #'s 2 & 3:  figure on the left unstamped.  Very unwholesome looking sort.  Listed as ADVENTURER WITH CHAINSWORD AND MISSLE LAUNCHER.  Figure on the right also an unpleasant Harkkonnen looking type with chainsword, (Rinn! Rinn!)  knife and mini laz pistol.  Runner stamped 'SPACE EUNUCH".  Space Eunuch?  WTF? Who wakes up in the morning and thinks to himself  "Today I shall sculpt a Space Eunuch!"  Oh well.  It's a cool figure.  I will try not to think too much about it. 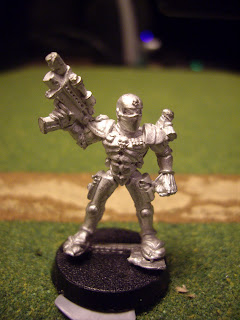 #4: The Classic Citadel Assassin.  Space Ninja.  Have wanted to buy this model for years.  No mystery here. 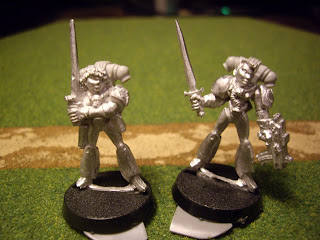 #'s 5 & 6:  CCM lists these models as having been released as FEMALE WARRIORS in 1988, and again as FEMALE SPACE ADVENTURERS in 1991, but the runners on both figures are stamped SISTER.  From this and their equipment, we can judge that they are early versions or fore-runners of the Adepta Sororitas.  Both wear power armor.  One has a sword and bolter, and the other has a power sword and holstered Lazer pistol. 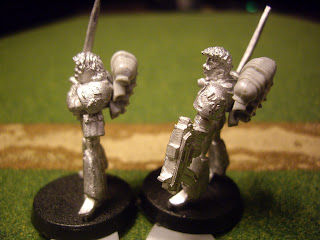 I couldn't get it to show up well in the pictures, but both SISTERS have a Ram's Head sigil on their left shoulder pads, a symbol I don't recall from Imperial iconography.  Not a Sisters symbol for sure. 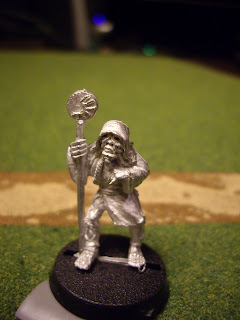 #7:   Haggard, distressed looking fellow.  Pipes and hoses and stuff running out of his head.  Runner stamped ADEPT MECH.  Clearly a Tech Priest of the Adeptus Mechanicus.