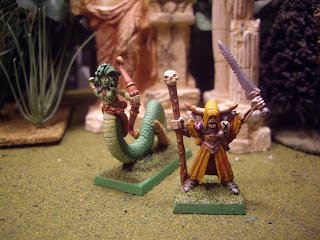 There had always been something wrong with Sleekrist.  That was what his father thought, and often said, even well within Sleekrist's hearing.  The boy was too pale, too unnaturally slender, and the women of the town were frightened by his eyes; they were like bright fires ringed in dark bruises, flecks of blue flame which bespoke something that was like lust, or hatred...or an unflinching recognition of unthinkable truths.  When he reached manhood, he left home without a thought.  Starved in the little towns amoung lonely green hills spotted with sheep, he sought for a feast in the Great City. 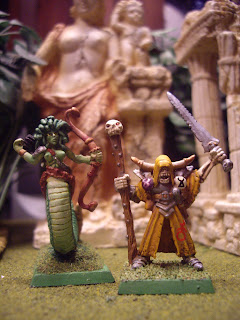 In the Great City, he found a banquet laid for him. A fine feast of corruption laid out upon a bed of debauchery.  The coiffed and painted women of the city were not like the country women.  They loved his dark and  devouring eyes.  "Exotic!" they called him, "Unworldly!"  And in their luxuriant bowers they coupled with him, surrendering themselves to his every perversion...offering up, to him, it seemed, cries that sounded like prayers.  All the cruel delights civilization can offer, Sleekrist sought and sampled.  It was never enough.  He became lost amoung strange streets, searching, with a ravening desperation,  for the great pleasure that would at last soothe the yearning that gnawed incurably at him.  In a dark place, far deeper within the City than ordinary men can venture, he found the hidden temple.  High above him a pair of mighty horns swayed in the shadows.  A key to unworldly secrets and sensations was pressed into his bony hands.  The shadow of the great horns nodded once and vanished in a cloud of perfume smoke and incense.

He knew he wasn't alone, after that.  A great God looked down on him and found his ugliness beautiful, his worthlessness valuable, his sick perversions fine and sacred things.  But the City was old and wicked and full of Secrets.  And the bull headed God was not the only lord who held a fiefdom there.  There, too, was the minor chaos power Settaideh, serpent Goddess of luxury, avarice and ancient secrets beyond the ken of men.  On his travels Sleekrist found her temple, and found, too her high Priestess, Saataveh of The Robe.  From the meeting of these two grew something which fools might mistake for love. 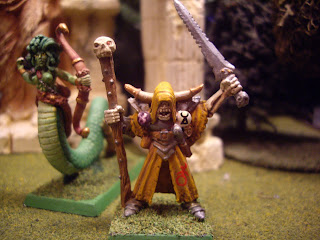 Twisted and destructive though it was, the devotion of these two Lords of corruption to one another soon aroused the Jealousy of the God of Pleasure.  The Judgement of the Bull-God upon these two disciples who had strayed in their devotions to their respective cults was horrific indeed.  Sleekrist's sensitive skin shriveled and fell from his bones, leaving his unfleshed form nerveless and insensible to pleasure.  Saataveh's body was twisted into something perhaps even more terrible: a dreadful, writhing, sexless, serpent thing, forever unable to give or to receive the delights of the body.
Sleekrist and his lover fled the Great City. They went east, traveling by night...through the wilderness, past the far borders of The Empire, to the very edges of the Old World...the Eastern Frontier of The Border Princes...here, for a long time, they gnawed at themselves in their despair, Sleekrist's mind decayed in his senseless body, and he became more and more mad, while his lover's own mind became more and more that of an animal and less and less that of a woman.  Yet, their magic remains powerful, and they are loyal puppets of the God who has crippled them. Still they serve him, hoping beyond hope that, should they do enough slaying in his name, Slaanesh will one day return their long-lost forms to them.

Sleekrist Kizzenkillum is a chaos sorcerer in the Chaos horde of Buzzgobb Phesterlick.  He never goes into battle unaccompanied by his 'lover' Saatevah, the Gorgon.  Saatevah's mind has become increasingly less human and more snake-like in recent years, and, to ensure her cooperation in battle, Sleekrist must bind her as a chaotic host before taking the field.
Posted by Mouse at 12:36 AM