Knights of the Mittel Mark Pt. 1


"Steel yourselves, boys!  And look not behind ye...There's no reason to look back...I can tell you what is there...your women and children are there...your homes, your sons and daughters are there, and they are all looking back at you...and saying with their frightened eyes, Papa...you're all that stands 'tween me and that scum out there..
Ragghh Ha Ha!  No, Don't look back boys!  Look Forward!  See that?  That's a grand hunt in front of you!  Let's go get them, and when you've filled them full of quarrels, then you'll go home, with their heads swinging at your belts...and when your women and pups see you coming, how their eyes will shine, to see their menfolk coming home, bathed in the blood of the foe...It's a grand hunt, boys...Let's Go!!
- Hans von Hirschfeld at the Battle of Scorpion Point 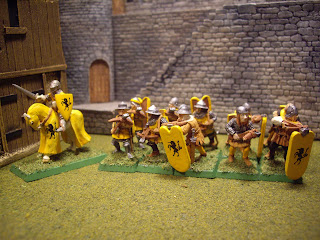 Shown here are two famous knights of the Mittelmark, or the Middle March, the central portion of the Baron von Refn's realm.  Above is Sir Erich von Nashorn.  Below we see Sir Hans von Hirschfeld....Each is shown with his troop of retainers at the Baron's fortified City-Stronghold, The Refnsberg...doubtless in preparation for a march against the enemies of the realm. 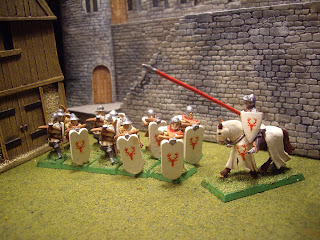 The Knights of the Baron von Refn's realm, a frontier region on the far eastern fringe of the Border Princes, hail from every corner of the Old World.  Most are Petty Nobles who followed their Lord, the Baron, into exile, but many are adventurers and former mercenaries who came to the Raven Standard in the years after the Baron's conquest of the Black River Country.  Amoung them are many Bretonnians as well as Tileans, Kislevites, even Estalians. Loyalty to the Baron von Refn and his campaign to lay claim to this wild and monster- infested slice of the frontier unite them as a mighty warrior brotherhood, despite their cultural differences.

Sir Hans von Hirschfeld was one of a number of knights who followed the Baron von Refn out of his exile from The Empire.  The von Hirshfeld family for many generations ruled a small fiefdom which encompassed an upland plateau rich with game and known as The Plain of Stags.  The men of the family were and are still known as great hunters, and the red stag's head on white shown on their coat-of-arms commemorates their claim of ownership on the rich hunting grounds of the snowy uplands of the Plain of Stags.  For years after the flight to the Border Princes, Sir Hans cherished the Dream of someday returning to the sacred hunting grounds of his forefathers.  The fact of the matter is, however, that the deer and boar hunting in the wild and untamed regions of the Border Princes is actually better than it was in Sir Hans' Homeland...so much so, that, over the years, Sir Hans has forgotten about reclaiming his ancient birthright. Besides, even when the smokehouses are choked and the larders are full, there are so many Orcs and other things tochase about and spear that, as much as they might resent having been chased from their ancestral home, the von Hirschfelds must admit that they have few complaints in their new lands. 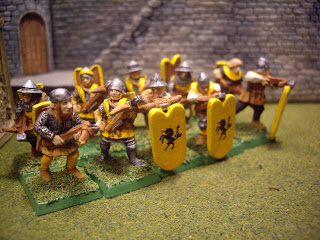 The Baron's knights are men of some wealth and property as well as worldly experience.  Indeed they must be, for they must be able to afford to control and defend their scattered holdings against Orcs, Chaos Warbands, and the occasional Undead incursion quite on their own, or with the help of their neighbors, until  the Baron can arrive with his troops. Unfortunately can often take some time.  Of course they must also be prepared to bring contingents to battle on behalf of their Lord and their friends... 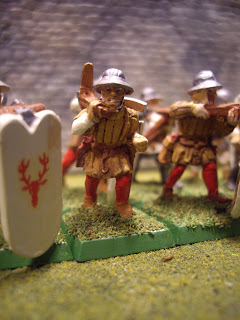 Each knight must thus maintain at all times a contingent of at least ten retainers, which he can bring to the Raven Standard in time of trouble.  This is in addition to any other troops he may need to watch over his holdings while he is away.   The crossbow is a popular weapon in the Baron's realm.  It is powerful, cheap to manufacture and easy for the average man to learn to use. As such, these troops of retainers are quite typical of those brought to The Raven Banner by the Knights of the realm. 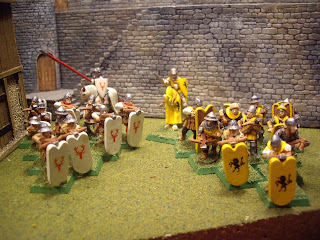 The von Nashorn family were an important clan in their region of the Empire, one which bordered on Bretonnia, and the von Nashorns still have ties to that distant country.  The von Nashorn's heraldry, a black unicorn on a yellow field, commemorates a family legend, one involving the mighty Zigurd von Nashorn, who in distant days accompanied the Imperial Crusaders into the lands of Araby.  Having won great renown in the crusades, Zigurd came home bearing with him many souvenirs and trophies, one of which was a huge, one-horned, hairless bull-calf creature which folk called The Nashorn. 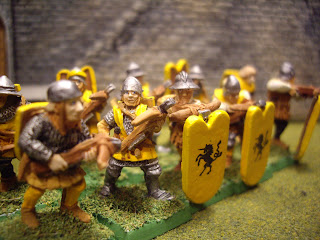 The Nashorn grew to be astonishingly huge and strong.  Attempts to breed the beast to the von Nashorn family cattle herd proved disastrous, but Sir Zigurd found another use for the monster...he learned to ride it, albeit somewhat precariously, and for years he bestrode the beast in battle, to the great terror of the Emporer's foes.  The Nashorn eventually aged and died, but the mighty beast captured the imagination of noble family and volk alike, and the family coat-of-arms was changed to show a great one-horned hairless bull in silhouette upon a bright yellow field which was intended to evoke the saffron sands of Araby.  Over the years, however, various ladies of the family exerted their influence to gradually change the coat-of-arms to a graceful horned horse, rather than a one-horned giant bull, as this rather less brutish device was considered more fashionable in the Bretonnian-influenced Border Country... 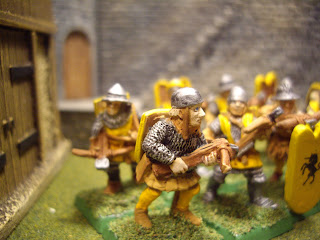 Of the three WFB 3rd Edition armies I've been working on, my ambiguously Bretonnian/Empire Army has been the poor relation thus far.  Mostly it's been militia and some halberdiers in greens, browns and whites, so a splash of color and professionalism is a welcome addition... 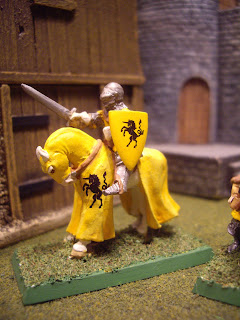 “Who will say that this is not our land?  Our fathers bought it with their blood; we will hold it with our flesh!  Come, a thousand enemies!  Come a thousand and thousands more!  We shall still stand here…and hand this good soil to our sons and daughters who come after us when we are dead!”
-Erich von Nashorn at the Battle of Scorpion Point 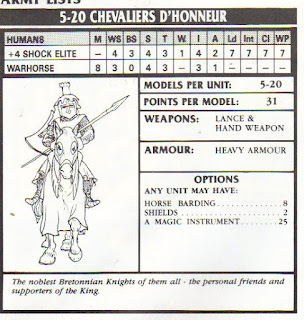 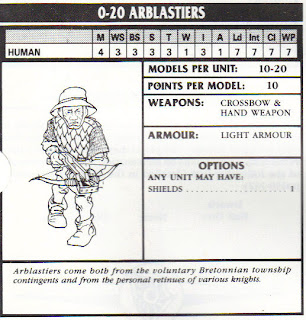