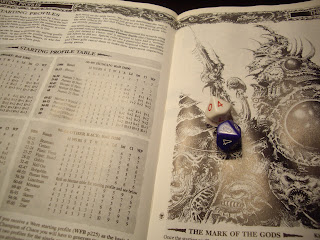 Now, that's assuming that I can actually make it to Oldhammer Day, which is a pretty big assumption.

So...all's quiet in the old homestead.  Wife asleep on the couch.  Dog curled up on the floor, lights low, idiot box off, fire galloping in the old wood stove on this snowy February evening.  I creep into the man cave, crack open my ancient, weather-beaten copy of Slaves to Darkness, and see what sort of force the Chaos Gods intend for me to take to Robin Hood country, assuming I can get there at all...

The dice plop and mutter on the book.

For my Champion's basic profile, I roll Chaos Dwarf and level 5 hero.  Hmm.  Not what I'd hoped for.  I wanted a big, imposing human champion.  Plus, at level 5, he's not exactly a tank, but that's Ok, I can work with it.

I roll for my champion's personal attribute:  Bestial Face.  Ok, will require a little conversion work, but it might be fun.

Really funny, Chaos Gods, Really funny.  Some guys, I know, could have fun with a bunny headed Chaos Dwarf champion, but I won't stand for it.  I know when you're mocking me, Chaos Gods.  I'm going to roll again.  You all can call me a cheater if you want to...I'll find a way to make up for it later.

This time I get Lion.  Actually, that's pretty cool, because I have some strange old lion head buttons in my bits box that I can work into the warband as standards and shields, so that could be fun and visually interesting.  Shouldn't be too hard to find a lion mini or toy and swap out the head. This mutation adds +1 to my champion's attack.  A bunny head just adds +1 to my own demoralization.

Moving on,  I need to choose a patron.  I leave it up to fate and put it on a d4.  I roll Khorne.  Possibly the most boring Chaos God, but OK, I'll go with it, it gives me Chaos Armor, which will toughen up my rather weak champion.

For my Chaos reward, I roll on the general chart for some reason and roll chaos armor.  This just spiffs up the chaos armor my champion already has by adding +1 to his armor save, which is just fine.

Moving on to the really fun part, I roll for my retinue.  It looks like the standard for Oldhammer Day is 5 rolls on the retinue chart for a level 5 champion...(someone correct me if I'm wrong)...so I roll...

#1:  I roll an 88, which gives me 2d4 Skaven.  I roll a total of 7, so I get 7 Skaven with light armor and hand weapon, and optional spears, although I'm not sure what use those are in a skirmish battle.  That's fine, because I like Skaven, and I have a few old models that have been gathering dust in a box for many years.  I'm sure they'll be happy to see the light of day once more.

#2:  6 Chaos Dwarves.  Appropriate for a warband with a Chaos Dwarf champion, but I only own 2 Chaos Dwarf models, so I'll have to buy the others.  They have light armor, shields, and hand weapons, and I can give them crossbows, if I want.

#3: 2 Chaos Goblins.  They have light armor, shields, hand weapons and bows.  I get to roll a d6-4 for their attributes.  To my surprise, I roll a 5!  I get an attribute for them!  I roll a 52-manic fighter.  They hate any enemy within 12 inches.  Be afraid, Chaos Warlords!  My goblins, all 2 of them, won't quit the fight so easily!  I was hoping for something cool like extra heads or arms, but it is what it is.

#4:  A warrior of Chaos.  Sounds good, but my sub-roll is lousy, so he turns out to only be a Chaos thug.  He has heavy armor, shield and hand weapon.

Well, that's it.  No Cockatrices, no Jabberwocks, no Gorgons, no towering, mega-level Chaos heroes, no sorcerers, nothing really all that fun.  Not even so much as a levitating troll, like ZHU got.

Well, it is what it is, I salute the flag and go upstairs to rifle through boxes in search of usable figures.
Sometime later, I return with... 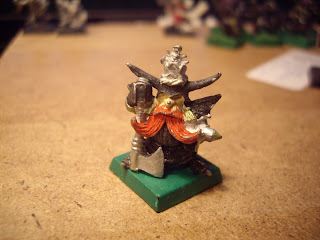 The Champion...
An interesting figure, but also very compact...fitting a lion face onto him may well be challenging.  Also, he's been rattling around in boxes for many years, so he's had some of his detail rubbed off, and his helmet is all sort of squashed and pathetic-looking...he might work out and he might not...we'll see... 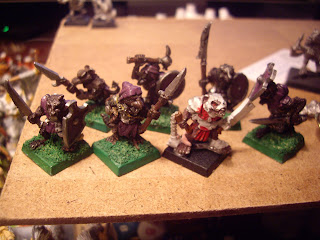 The Skaven.  Terrible old paint jobs from about 20 years ago.   A dip in the strip jar, a few minor conversions, some nice shields, and they should be ready to go.  Not that it matters...At the first sign of trouble, they will surely run away. 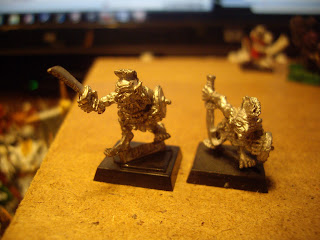 The Chaos Goblins?  Undoubtedly, he most lethal component of my warband.  You know you're afraid of them...the weapons configurations and period hair-styles are right... 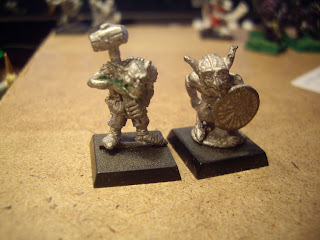 ...but I think these two have more style...I might go with them instead.  Again, not that it matters much, as they will be surely be stamped out of existence in the first few seconds of action... 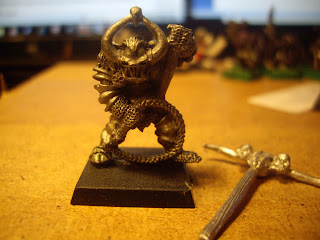 The armored Thug...I bought 2 of these in a lot, one with the scythe intact, and one not...the other one is now a handler for one of Buzzgobb Phesterlick's chaos hound packs.  This guy was probably just going to get tossed into an ebay junk lot, but now I think I may make this model my champion's standard bearer.  The standard won't have any effect on game play, but it might look nice, and give this lonely thug a raison d'etre... 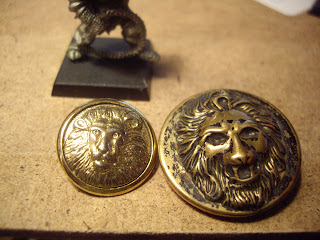 2 curious old buttons which have been rattling around in my bits boxes for years...always meant to do something with them...a lion-faced Chaos champion may be just the thing to help me finally get some use out of them as standards or shields.  Nice motif to tie the warband together. 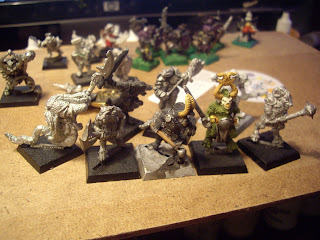 I rolled for 8 Beastmen, but I am dropping 1 to make up for cheating on the stupid, intolerable bunny head roll for my champion's Bestial Face mutation.  Since the lion face mutation gives my champion an extra attack he wouldn't otherwise have had, I think that's fair.  These seven lads bravely volunteered to join the warband.  As you can see two of them are already partly painted; they are members of the beastman hero Echunga Gorozgun's regiment, which I am in the process of painting right now for Buzzgobb's Chaos horde.

So, other than the Chaos Dwarves, which I still have to buy, that's it.  Not a particularly fearsome warband, but we'll put up the best fight we can, by the Gods!