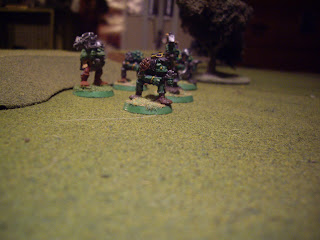 Neel's lads bore to the left, moving up the muddy, slippery little slope toward the farmhouse.  As they crested the rise, they caught sight of the Space Pirates, suddenly much closer now.  Abruptly the clatter of an autogun rang out, and a handful of red laser bolts lanced toward them from out of the downpour, passing just over their heads and rather discomfiting Neel.  "Oh wow! he shouted, ducking and dancing about a little in his startled excitement...Oh, Wow, hey...!  Hey, Guys!  I think they're trying to kill us!  We should probably try to get to cover or somefing!!"  Neel's lads were a step ahead of him, which was typical, really.  They swept  to the rear of the farmhouse and threw their weapons up on the back garden wall, ready to engage the enemy.

Rikk and Vivyun's boys loped toward the little orchard, moving as swiftly as they might in the drenching downpour and clinging mud.  "Don't worry, Lads!  called Rikk, trying to make himself as small as possible behind his advancing boys, using their bodies for cover... I'm right behind you!"  Not particularly encouraged by their leader's example, the boys raced forward anyway, quickly passing through the orchard and closing in on the barn and stables.  Mykhul followed just behind them,  hoping, probably vainly, that he might be able to exert some control... 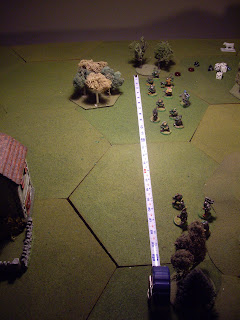 The Young 'uns overall deployment...The very small stands of trees at top and bottom are not actual terrain, they just mark the table corners.  Rickk's Pyros are at top, near the table edge.  On their left are Vivyun's Eviscerators, with Mykhul following behind, trying to supervise the attack...they are trying to use the little orchard to cover their advance. 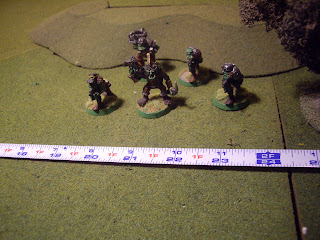 Near the lower table edge, Neel leads his knuckleheads towards the hard cover and treasure in the Farmhouse.  (maybe he's not so dumb after all...) 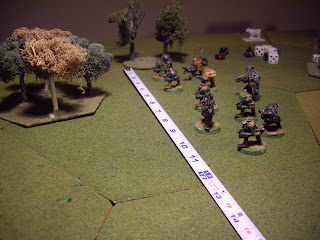 Rikk and Vivyun's combined frontage about 12" ... 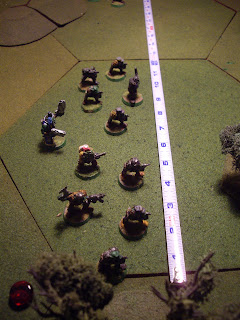 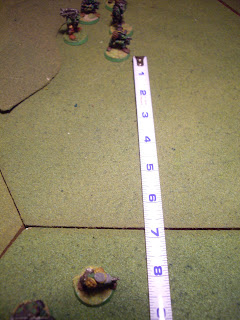 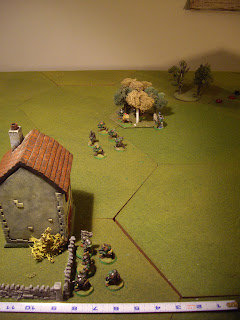 The Young 'Uns run forward...having passed his stupidity test, Neel leads his boys to a firing position at the farmhouse wall.  Vivyun and Rikk are herded forward by Mykhul, Rikk's boys ending up near the edge of the little orchard, Vivyun's boys more or less out in the open, Mykhul trailing a little behind...

As he reached the Farmhouse wall, Neel could see that the Space Pirates weren't wasting any time.  They were coming straight on, and fast!  On the Pirates' flank, the great, horse-like creature was advancing at a terrifying speed.  Neel noticed that some of the little humies at the center of the Pirate line were halting near the big snappy bush...One of them hefted a great weapon onto his shoulder.  Neel saw him aim it straight at Vivyun's mob!

The Stuntie was so startled by the appearance of the long face behind the wall that his shot went wide and burst in a pillar of fruitless smoke and steam, a ways off to Vivyun's left.

Neel grinned happily and threw a peace sign the stuntie's way.  "Hey!  I'm proud of you, man!  Thank me later!"

The Stuntie glanced around at his comrades, as if in need of reassurance that he was not going mad... 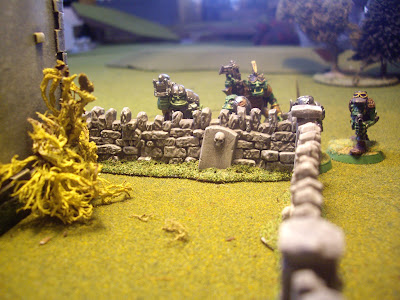 The second round begins.  Neel almost passes his stupidity test.  Almost.  His boyz keep their wits about them, however, and fire boltguns and missile launcher at the rapidly approaching Zoat!  The boys turn out to be only marginally more competant than their leader, however.  Only one bolter-boy hits, and he rolls a fat 1 to wound.  The missile launcher misses completely, which is too bad, as I was keen to see the Zoat vanish in a spectacular fireball sort of thing. 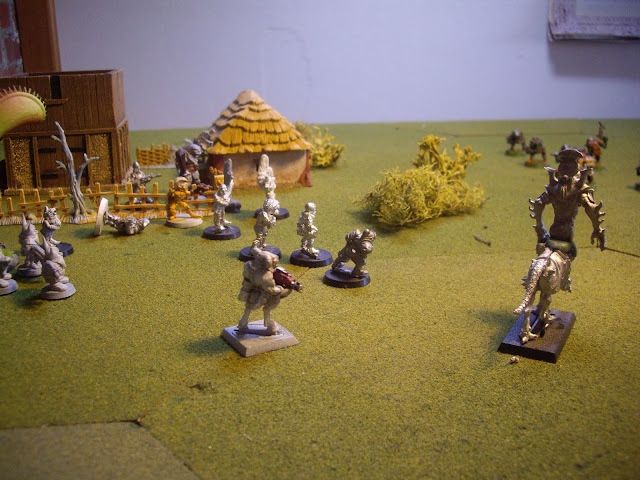 Anyway, at the center of the line, Viv leads his eviscerators forward 4" and they let go with their boltguns at the pirates advancing between the Zoat and the Space Dwarves.  Rolling to hit, they score 2 hits and 1 wound. 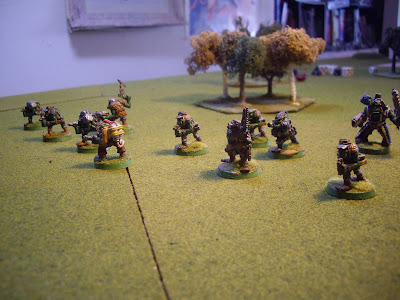 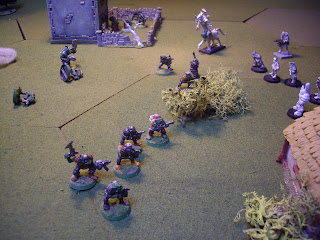 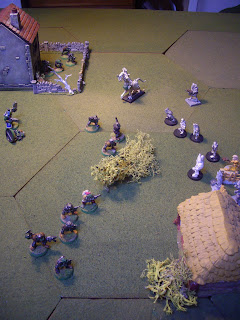 Round three begins.  Neel doesn't even come close to passing his stupidity test.  He rolls a fat twelve.  Once again, his boys ignore his 'leadership', seize the initiative and vault over the farmhouse wall, dropping an inch of movement, they spread out through the yard and run forward, ending up about an inch or so from the back of the front wall.  Poor Neel is left behind.  "Hey!  Where's everybody going?" 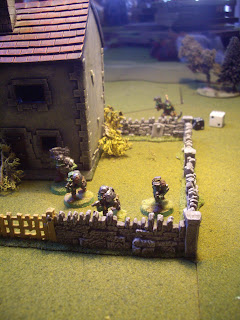 Vivyun's boys hold steady despite two of their number having been cut down.  On his next roll, however, Vivyun is gripped by frenzy and runs straight toward Ulysses, roaring and bellowing incoherently.  His boys fail to pass their own check, frenzy, and follow him forward their full movement. 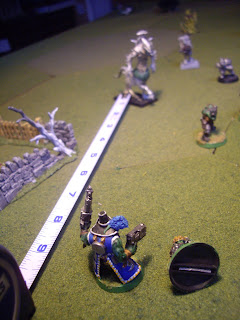 Boss Mychul moves forward four inches.  As he rounds the corner of the farmhouse, he catches sight of Bert the Zoat and blazes away with his bolt pistol!  He scores a direct hit, but his bolter shells burst harmlessly on the creatures tough hide! 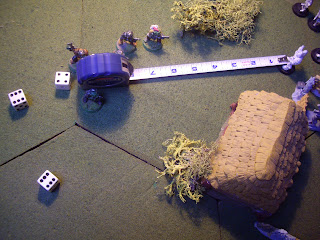 Rikk's pyros move straight forward 4 inches....As they close the range with Captain Ulysses, they begin to giggle uncontrollably then open up with their bolters!  Rikk and all three of his bolter boys hit, rolling to wound, they roll two 3's one 4 and one 5 on the Pirate Captain's band...4 wounds!