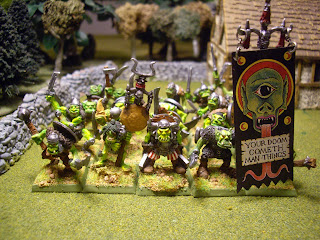 Behold the famous Orc Berserker Scarfgagg Sorehead and his band of crazed Orc boys.  Scarfgagg is one of the more important chieftains in Big Blackie's Orcish horde.  Up until a couple of years ago Scarffgagg was a relatively minor Orc champion, but eventually a lifetime's worth of exceptionally poor oral hygiene caught up with him.  Devastating, chronic tooth decay set in and resulted in intermittent splitting headaches which occasionally drive Scarfgagg into hurricane-like fits of blood-crazed fury. 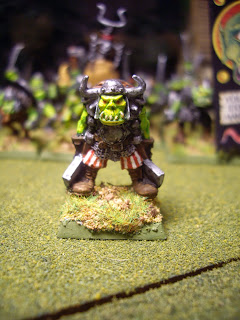 Scarfgagg's boss was the first to feel the sharp edge of his lunacy when he made the mistake of giving Scarfgagg an order when Scarff was in the grip of one of his migraines.  Shortly after giving the order, Scarfgagg's boss died violently and control of the mob fell to Scarfgagg. 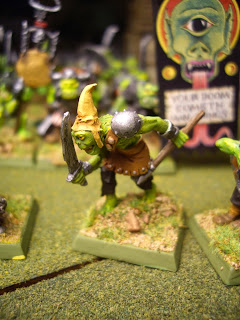 Since then, Scarfgagg's boys have had a great deal of fun spreading terror and destruction up and down the banks of the Black River.  They don't really understand how or why their chieftain goes into his terrifying rages, but they delightedly do their best to imitate him.  The results have been impressive.  Scarfgagg Sorehead's boys have become of of the most feared outfits in Big Blackie's army. 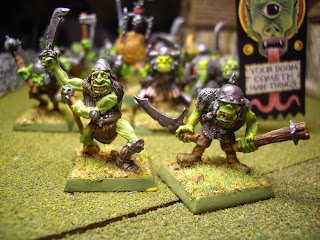 I'm off to Enfilade in Washington state today, so I'm throwing this post up quick on my way out the door.  Finishing this regiment is an important mile stone, as it completes all the compulsory troops for my Oldhammer Orc & Goblin army.   My plan is to finish 3,000 pts by fall, adding on one unit or group of characters per month until the big finale in Orctober.  Then, in November or December, they will go up against Buzzgobb Phesterlick's Chaos Horde!  Once I get more Orc boys into the horde, I may start using Scarfgagg's Orcs as Savage Orcs.  I never really liked the bone-in-the-nose look of the savage Orc minis, and don't know why regular Orcs wouldn't be just as prone to frenzy as say, Dwarves.  Orcs are all pretty savage, after all, aren't they? 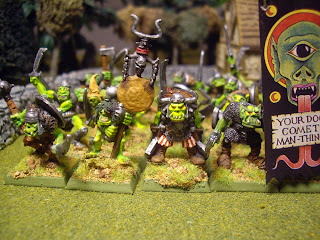 The minis are all Citadel, except for 4 Alternative Armies minis and 1 RAFM.  Finding Orcs models with extra hand weapons is pretty challenging, and assembling all the figures took quite a while.  I painted the banner myself.  (HA!!  I WISH!!)  I actually snipped it from the back of a battered copy of the Heroes for Wargames book. 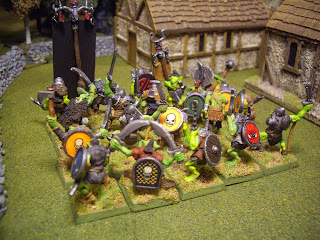 View from the wake of the unit's advance.  Going to try to make bright, garish shields reminiscent of 3rd edition a theme of Big Blackie's horde...