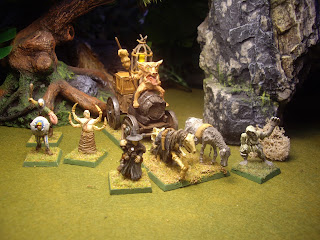 "Bringing up the rear of any Chaos horde may be seen their hideous train of camp followers.  Foul beings including those mutants too far gone to be worth putting into the battle line.  They accompany awesome, creaking wagons of  horrific form, riddled with woodworm and decay, and drawn by pathetically deformed beasts of burden... 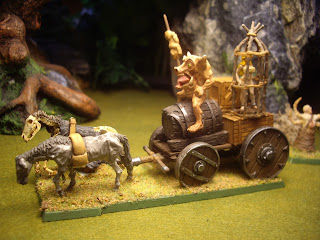 These weird wains are piled high with cages, cauldrons and sinister inlaid caskets, while implements of torture and insane ritual are hung about them.  A continuous, eerie sighing emanates from the sad, snuffling and cowled figures groping behind the wagons..."
-Warhammer Armies 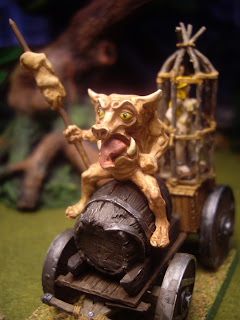 Who among us was not mightily inspired by that passage, reading it as a kid?  Twenty-some odd years later, Nigel Stillman's words have finally resulted, partly, in this. 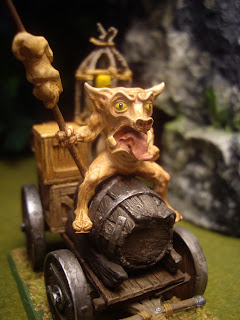 This baggage train section was quite a colossal kit-bash. The wagon model is based on a RAFM Skeleton War Wagon model.  I bought a pair of them very cheap from RAFM direct and I added some wheels from a new-school Skaven war machine kit, purchased separately on ebay.  The skeletal horse came with the Skeleton War Wagon kit. 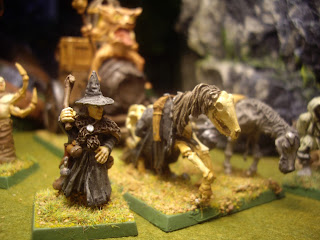 Added some other plastic and resin bits from Armorcast and GW, including the cage in which our Devil Pig (I like to think of him as some sort of lesser daemon of the minor Chaos God of gluttony), is keeping a particularly tasty bit to eat later on.  The tasty bit is an old Ral Partha slave girl. 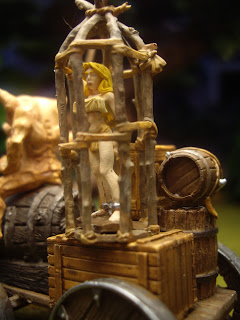 The Devil Pig himself, the whipping horse and most of the camp followers are from Eureka's delightfully old-school flavored 'Chaos Army'.  The line isn't so much an army as a mob of mutants with a very Bosch/Bruegel theme.  Very cool. 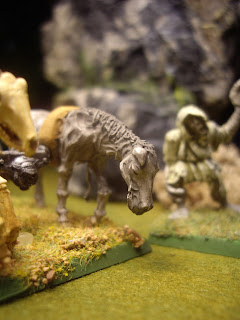 The Whipping Horse.  Poor Fellow.  It's a sad figure but I'm very attached to it.  When I saw it, I was immediately reminded of the Devil's horse in Albrecht Durer's The Knight and the Devil.  I found this illustration in a book on medieval warfare when I was a very small boy.  It has exercised a very powerful hold on my imagination ever since. Particularly that miserable horse.  I have no idea why. 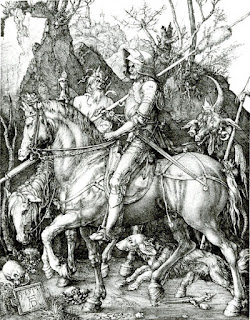 The first of the 'sad snuffling and groping figures...a mutant too far gone to fight in the line but still rather scary.  Nice mini. Could easily be a Cenobite from Hellraiser...  A Eureka piece... 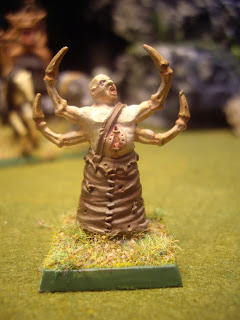 An old Citadel Witch.  Seemed like a good choice for a cultist model.  Careful inspection reveals that her personal equipment includes a flashlight/electric torch!  As good as a wand of light, I guess. 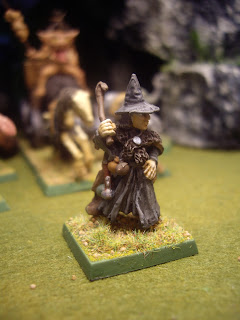 Here we have a miserably mutated creature...approaching being barely functional.  I think this is a Heartbreaker model.  I'm not sure.  I painted him a long time ago, you can see he is painted and based somewhat differently from the others.  I thought he'd fit in well, though. 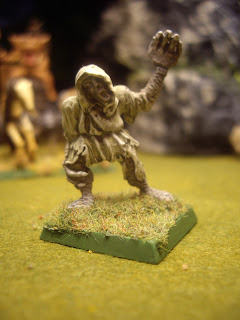 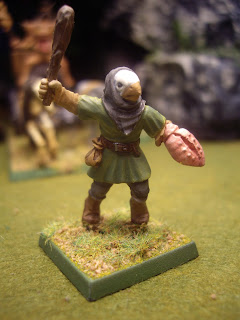 Egghead.  Another Eureka  A fun piece. 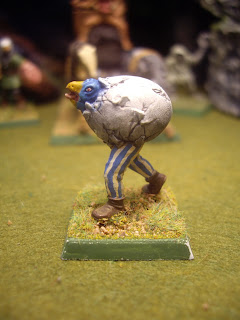 Another shot of the wagon... 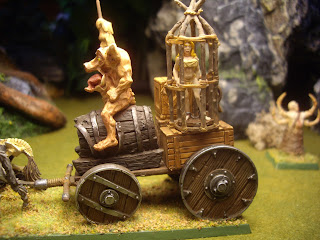 And of the section as a whole... 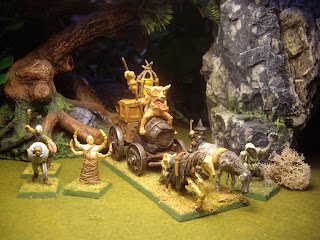 Still another RAFM cart and lots of Eureka mutants to fashion into a second baggage train section for Aulech Henschblut's Chaos raiders.