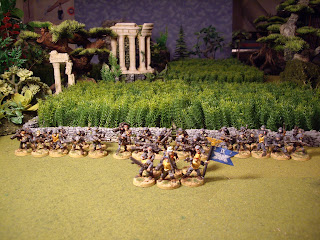 2nd Platoon, 'C' company, 9th Nepenthe Infantry Regiment parades in preparation for a sweep-and-clear of a stretch of farmland in the Tantzich-Poznya region of Geminion Prime, sometime around I.C. 3460.  In the wake of the initial invasion of the Geminion system by the Ork Warlord Bloodsnort Garglephlegm, wide swathes of Geminion Prime and Geminion Secundus remained under Ork control for decades. 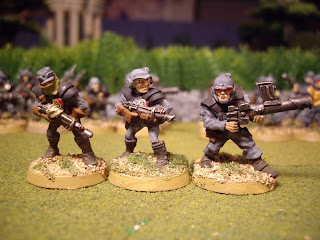 Having successfully contained the Ork onslaught, Imperial and Planetary Defense Forces were eventually able to squeeze the Ork planet-heads out of existence, but for many years Ork 'Kingdoms' flourished in the Geminons, and between major offensives border clashes, raids and skirmishes along the edges of these Ork-held zones were daily occurrences. 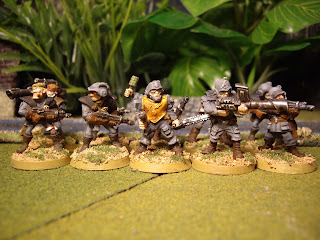 First Squad, 2nd Platoon, ready to move out on patrol.  The standard weapons configuration for an Imperial Guard tactical squad prevails throughout the platoon.  Seven lasguns, a grenade launcher and a las cannon make up the squad's basic armament.  Evidence that the squad has already seen tough fighting can be found in the cigar-chomping guardsman at front left, whose bandaged thigh and defiant expression bear mute testimony his trevails. 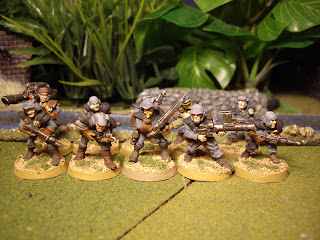 Some variations in uniform and equipment can be found in the platoon's second squad, though the weapons configuration remains the same.  During the Garglephlegm campaigns it was typical for Imperial guard units to replace some losses with volunteers accepted from amoung the Planetary Defense Forces. 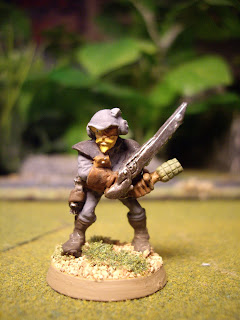 This probably accounts for this Sergeant's lack of breastplate and other regulation equipment; note also the lascannon gunner's lack of standard issue helmet and other gear; both men are very likely colonial volunteers serving with The Guard.  And good for them. 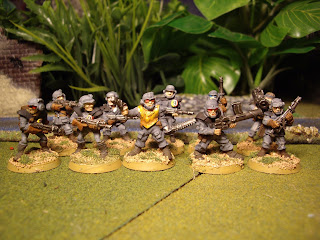 The 3rd squad.  The equipment seen here is more to standard.  The red and gold badge of the 9th Nepenthe is clearly visible on some of the mens' uniforms. 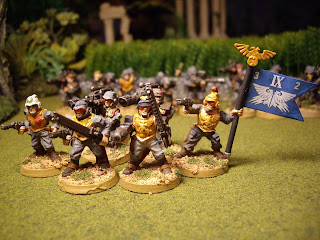 The command squad.  The Lieutenant carries a plasma pistol in addition to his alarmingly large chainsword.  Note the blue piping on his cap, mirrored in the platoon guidon; blue is an identifying color for Nepenthian units in the Wailing Reach. 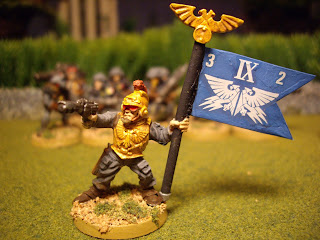 (Aside: A platoon having its own standard seemed a bit silly to me.  I decided to go minimalist and roughly modeled the platoon standard after one of those US army infantry company guidons which I have followed for so many years.  Roman numeral nine is the regimental number, the number at upper left  numeral identifies the company, and the upper right number identifies the platoon... 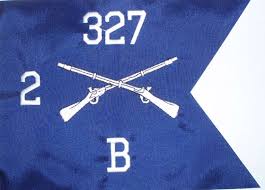 ...If I ever do a company command squad I'll go bigger and bolder, but for platoons, I think this looks quite appropriate.) 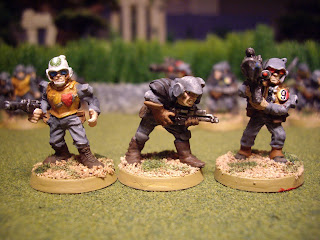 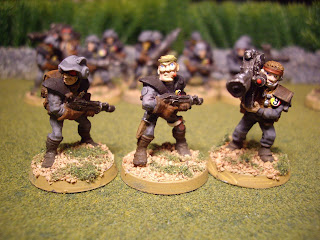 These guys didn't come out as nice as I'd wanted.  I wish now that I'd gone a little lighter on the grey.
The 9th Nepenthe has a long and glorious history in the service of The Emperor, but it's a helluva yarn and I'm a bit weary to get into it now.... 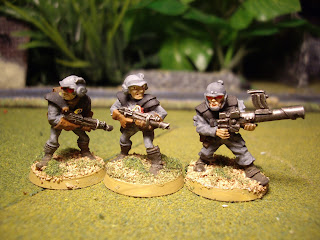 ...Plenty of time for that in future posts... 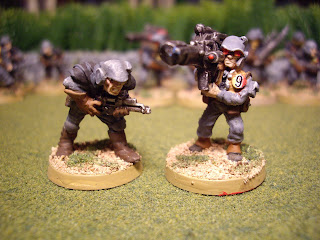