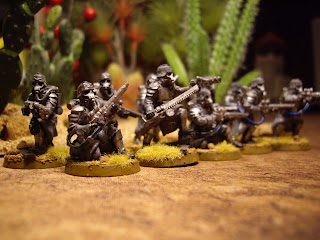 I bought these guys in 2007.  I only know that because I know I bought them in the middle of my Iraq deployment.  I naturally would have liked a whole army of them.  Such a venture was too expensive for me, but I allowed myself one squad for my Inquisition army, which consisted of a weird and wild retinue of arco-flagellants, Sisters of Battle, half man, half machine retainers and converted armored vehicles.  For some time they made up the bodyguard of my Inquisitor, the dreaded Simion Phang. 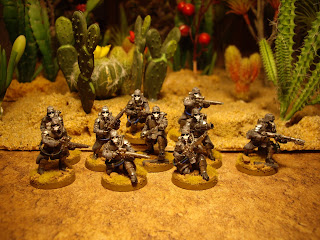 My choice of models made for a pretty wonderful looking collection, and even my conversion work wasn't too bad, but my painting wasn't there yet.  Probably didn't help that I was trying to paint in a tent in Iraq with lousy light and crummy gear.  In the end I wasn't happy with the army and I never finished it.  There are a lot of great miniatures still sitting in boxes wondering why I abandoned them.  I have a converted Rhino which the guys used to ride around in somewhere, too.  I shall have to dig that out and paint it. 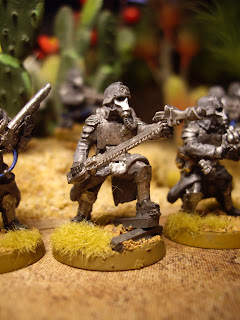 I pulled this sinister looking bunch out of a drawer a few days ago where they'd been sitting almost forgotten for about a decade and decided that they didn't look too bad, they just needed some re-basing and a little touching up, so here they are, Big Sarge out front, leading the assault... 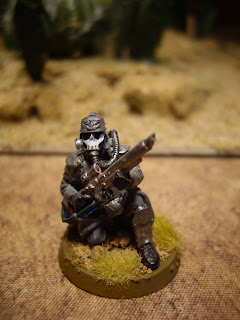 These really are marvelously menacing and characterful models, with their blend of Dystopian Sci Fi and WW 1 trench warfare elements... 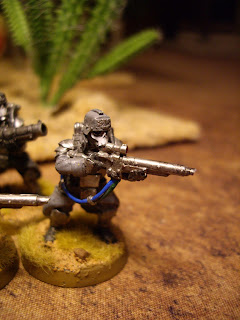 ...I can almost forgive them for being plastic.  They lack the goofiness of my more regular Rogue Trader stuff, though.  I never made an effort to see if they would fit in with my Rogue Trader Imperial Guard guys.  Maybe they could be a squad of elite shock troops or something. 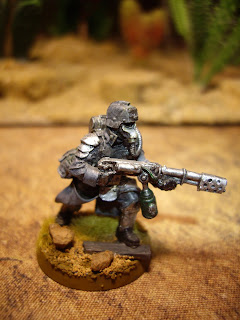 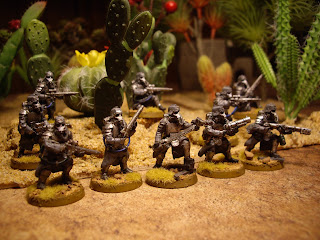 The Grenadiers assault through the cactus forest...Space Orks beware! 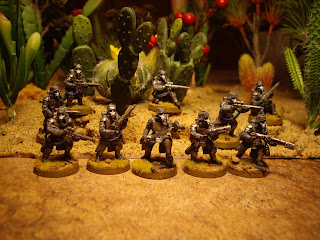