1st Company of the Muster of The Upper Hall 'Skull Poppers' 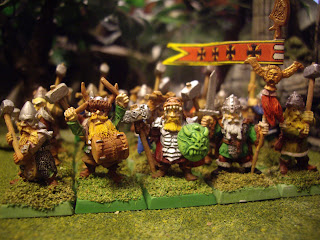 The Lord of the Upper Hall at this time is Thorirr Maull, a Dwarf renowned for his toughness, aggressiveness and no-nonsense manner. (And his flamboyant battle dress). The Dwarves of the upper hall are not as numerous as the Dwarves of the Great Hall, nor are they as wealthy, or as generally well equipped, but they field a number of famous battle-companies well known both to the friendly men of the Black River country, and to the Dwarves' dire enemies, the Orcs and Goblins of Big Blackie's Greenskin Horde. 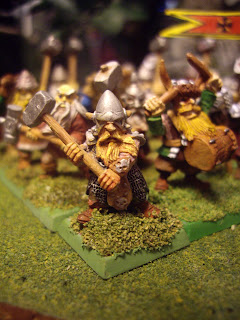 One of the best known are the 1st Company, the "Skull Poppers", named for the very distinctive sound a Goblin's head makes when giving way under a blow from one of their terrible Battle-hammers. 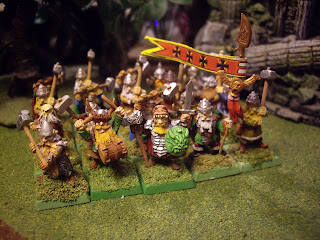 Despite his rather dramatic and intimidating appearance on the battlefield, Lord Thorirr Maull is actually an unassuming and Down-to-Earth Chieftain, and does not retain a bodyguard.  When he goes to battle, he usually personally leads the Clansmen of the First Company, lending his considerable animal magnetism and the terrifying power of his magical Thunder Hammer to the fight. 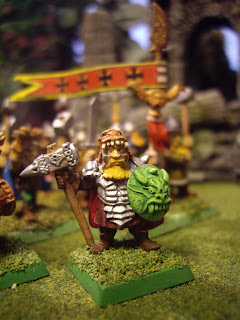 Lord Thorirr Maull is depicted here in his full and fearsome battle kit, wearing his Mithril plate armor and carrying his terrible Thunder Hammer and Dragon Shield.  When going to battle, Thorirr often wears the pelt of a Beastman chieftain late of the horde of Buzzgobb Phesterlick. Thorirr is famously known to have dispatched this foul mutant in the Battle of Scorpion Point and to have worn the tattered remnant of the beast as a head warmer eve since.  A (mostly) friendly rivalry exists between Lord Thorirr and The King's General, Sveinn Donnerkind, whom Lord Thorirr sometimes playfully accuses of affecting his personal style. 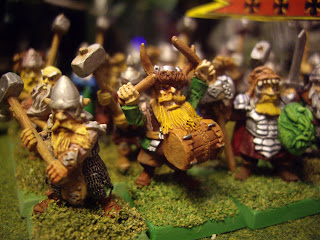 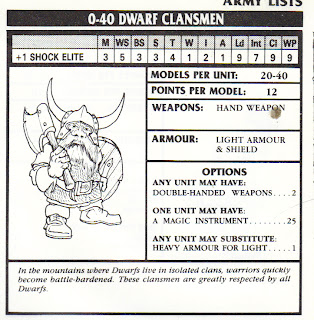