The Plain of Crows Pt. 1: Background

Lord Thorirr Maull scowled darkly and shook his head, his long beard wagging in the gloom.  "Now that's a sorry damned report to have to send to the King." he growled.  "Tomorrow I must lead his warriors into battle with Dwarves!" 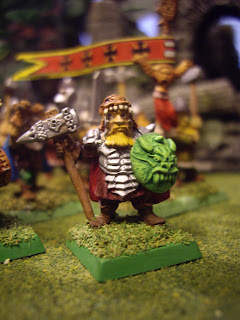 The rumor of the approach of a well armed band of Dwarves down the old north road days before had stirred great interest in the halls of Thunder Mount.  Three days previous, the King had dispatched Lord Thorirr, Chieftain of the Upper Hall, to meet them on the road and see what they wanted.  The assumption had been  that the newcomers might be refugees from the Goblin wars still raging in the North, or perhaps a reconnaissance from some new hold recently established somewhere north of the Thunder Mountain range.  Perhaps they needed assistance or guidance.  Surely they should be welcomed and aided.  But when Thorirr's heralds arrived in the strangers' camp and were ushered into the presence of their commander  they heard not words of greeting and friendship, but rather, what seemed, to them at least, to be the ravings of a madman.   "Tell me, once more, what he said, this...Uniter?"  muttered Thorirr wearily... 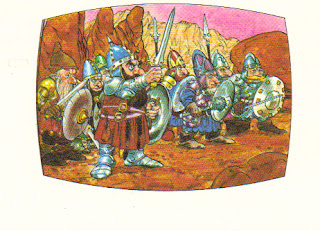 "He claims he wants an alliance,  replied the herald,  but the words "surrender and submission to his person" were used.  Our King is to bow to him, it seems, and all our halls to pay him tribute, which he claims he needs to continue the war against the Greenskins in the North."

"How he got through Big Blackie's Orcs and Gobbos is a tale I'd like to hear." said Thorirr, rubbing his bristly chin.

"Fought their way through, by the looks of them."  said Hamm.  The old Wizard had accompanied the herald.  "Their gear had seen recent use.  I suspect they hid their wounded from us, but some of them still looked none too spry." 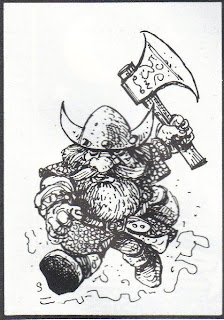 "Well, that's something, anyway."  grunted Thorirr, wryly.  "Got themselves cut down to size, coming here, and no doubt took care of a few of Big Blackie's boys along the way!"

"But it's madness!"  spat Floi Haybeard, shifting his great sword, Icicle, onto his armored knees as he sat down heavily on his camp chair.  "This fool could have alliance with us, if he but asked for it, to the benefit of us all!"

"He'll not accept such terms."  Hamm said quickly.  "To him alliance means unification under his authority." 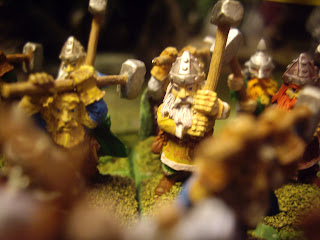 "Not acceptable.  said Borrin, Captain of the Red Dragons.  Our forefathers came here to escape the chaos of the northern wars.  They wouldn't want to see us dragged back into them, especially not on the whim of a madman." 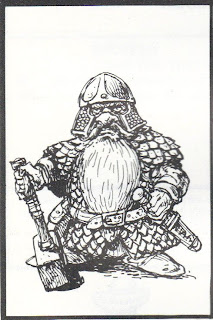 Thorirr had not come expecting a fight.  He had brought his 1st Company with him as an escort, and the King had sent his guard of Axemen to fly his banner.  At the last moment Borrin had volunteered to come with his company, just in case, and he had brought with him a bolt thrower, carried on the backs of a pair of sturdy mules.  But altogether the force was more of an honor guard than an army.  Thorirr had no crossbowmen, no skirmishers, no flank guards...

"We could withdraw to the Maiden's Peak, said Hamm, as if he had read Thorirr's mind, (and who knows?  Maybe he had.)...and hold them at the narrow way."

"Or retire to Thunder Mountain."  said Floi stroking his thick blonde beard.  "They do not have nearly enough warriors to face the full King's Muster.  They may change their minds about us when they see our full strength."

"No, said Thorirr, his voice low but carrying the stony edge of absolute certainty.  The battle in that case may be simply delayed.  He could always come back with more warriors.  When we report to the King, Let's report that we've solved a problem for him, not that we have brought him a problem that he needs to solve.  We'll teach this madman some respect tomorrow, I think.  We'll see how he feels after a few knocks on the head."

He turned to the herald.  "Go back and tell this "Uniter,"  as he calls himself, that we'll meet him tomorrow on the Plain of Crows.  Tell him we will offer him quarter if he accepts it."

The herald nodded, made a quick bow, and ducked out of the firelight.

"Make ready to march."  said Thorirr.  The gloom he had felt was passing with his uncertainty, and he began to feel the light of battle lust dawning, warm and rosy, in his breast and all through his limbs.

"Let's set a good table for the Crows tomorrow."

A week or so ago, Private Weird pitched me the idea of trying a game of WFB 3rd Edition played over the net...My Old School Dwarves against his.  Naturally I jumped at the chance.  An interesting experiment that may pave  the way for great things in future.  The armies will be 1400 pts, assembled from the list in Warhammer Armies.

In the interests of Simplicity, I'm proposing a very basic board 4' x 4'  The top left and bottom right corners could be wooded to a depth of about 2 feet and a width of 1 foot.   Sort of boring, but I figure that since we can't see the board the other guy is using, less might well turn out to be more in this case.  Still more than happy to add more terrain if P.W. likes.  I'll be using some of my unpainted Dwarves and halflings to represent P.W.'s army on my table. 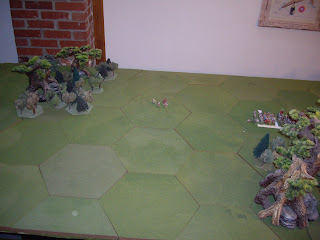 (sorry for the crummy lighting and composition here, but I was in a hurry.  The actual photos of the game in progress will look much nicer.  But this gives you the idea of what the Plain of Crows will look like.