The Mad Monks of Saint Passionario's 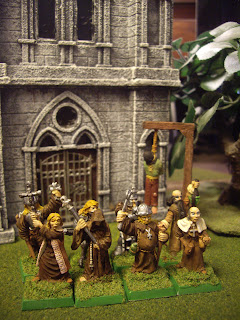 Some centuries ago, so the Mad Monks of Saint Passionario say, a strange young man came to the Warhammer world.  He had come from far away, having journeyed thousands of miles through mountain and marsh, over plain and sea.  He was a seemingly wise young man, quite kind and gentle and more than a little sad.  When he spoke to people in the strange new land he had come to, the land of the Warhammer, he came invariably around to one thing:  Was it really necessary, all this war business?  Wouldn't it be something if people just started being nice to each other for a change?  The young man had no name, but as he crossed the land, preaching his curious doctrine of kindness and nonviolence, he began to attract attention, and became known amoung the common folk as 'El Passionario'.  Many people flocked to hear him speak, and a following began to grow up around him in northern Estalia and southern Bretonnia. 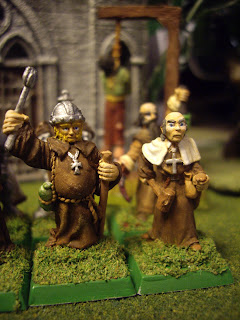 Alas, amoung the people who came to listen to him one day was a certain Lord Framaggio, the Duc of Daxx, and his crew of less than reputable knights and retainers.  The Duc thought El Passionario was delightfully entertaining.  He thought El Passionario's ideas about compassion and brotherly love were so inspiringly hilarious, that he had him nailed to a tree and left for dead, which, sadly, he was.  Thus passed the 'Very Strange Enchanted Boy," of legend,  El Passionario.  Yet, his story does not end there.  One of El Passionario's most devoted disciples, Stefano de Aragones, recovered El Passionario's body and arranged to have it transported to an island off the wild coast of Tilea, where, he hoped, a small cult might be able to revere the memory of their gentle Saint in relative peace and quiet.  Stefano de Aragones' ship was captured by Araby pirates a few miles from her destination and Stefano was tortured to death by the Arabyans for the crime of trying to infect them with his heretical views.  But the ship bearing El Passionario's remains slipped by the pirates and a handful of devotees managed to establish a reliquary and monastery in the name of their beloved Saint on the tiny island. 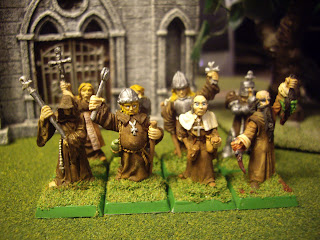 Sadly, and, we should think, perhaps predictably, the monastery was no sooner completed than the little island was invaded and swept from end to end by the fire and steel of the armies of the incalculably awful chaos warlord Gundagorr Hogswaggle, Champion of Nurgle.  A handful of priests managed to escape the flaming ruins of the monastery and cast themselves adrift on the ocean with a tiny bejewelled box containing a few bits of their beloved Saint.  The monks cast up in northwestern Tilea, where they were quickly swept up in the events of the 17th war of the Borgian Succession, an experience apparently so horrible that the histories of the order neglect to describe it in any detail. 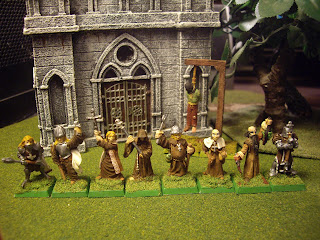 One thing about that period of the order's history is certain.  By the time the war was over, the doctrine of the order of El Passionario had undergone certain fundamental changes.  Much of the change was undoubtedly due to the influence of the young Tilean Noccoli Macchio, who joined the order about this time.  Macchio beleived that the order was in great need of reform.  Macchio taught that although the doctrine of brotherly love that El Passionario had taught was wonderfully nice and sweet and good, it was, as a survival strategy, completely unsuited to the sanguine realities of the Warhammer world.  Something was going to have to change. 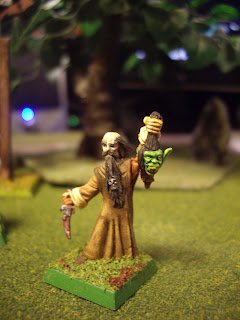 There had already been at least one attempt at fundamental change.  It has now been learned through other sources that the monk Raspardan, a shadowy figure apparently of Kislevite origin, had risen to high rank in the order during this period, and had preached that the violent of the world would never listen to reason, would never come to peace of their own accord, and that they must, therefore, be beaten into submission by the disciples of the Son of Peace, El Passionario.  All of them.  Every last mother's son of them.  Raspardan utterly rejected the theory that the order should shelter in quiet corners of the world hoping to be left alone.  Rather, he preached a doctrine of war upon the violent and warlike.
It is said that Raspardan's radical theories were not well received by many members of the order, and that, in order to preserve El Passionario's legacy of peace and brotherly love, numerous attempts were made on Raspardan's life.  Amazingly, Raspardan seems to have survived at least forty-six assassination attempts before finally succumbing to the blades of the violent in a nameless battle between Tilean and Imperial forces fought during this time.  Raspardan led the Order of El Passionario down upon the battle attacking the heretically violent and warlike on both sides, without favoritism, and was naturally set upon by both Tileans and the sons of Sigmar, and cut into small pieces. 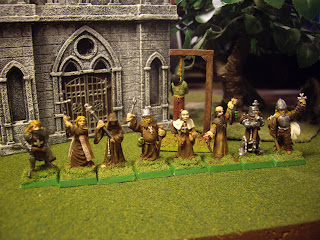 Enter Niccolo Macchio.  Macchio's teachings utterly transformed the order of El Passionario by introducing an element of realpolitik, heretofore unknown amoung this highly idealistic sect.  Macchio taught that the warlike forces of law in the world were, in fact the agents of peace, peace being a goal which could only be gained through the aquisition and the application of strength.  Rather than attack all the violent indiscriminately, as Raspardan had done, Macchio taught that the order should henceforth align itself with those violent and warlike agencies which were lawful and constant enough to establish and maintain law and order, and attack instead those who attempted to resist them.  Only by doing so could El Passionario's disciples hope to help achieve their Patron Saint's vision of a peaceful world.  Thereafter, the order entered a new phase.  Day and night, the brothers trained for war, busying themselves in learning the ways of weapons and clever stratagems for overcoming the enemies of their chosen allies and agents.  The ringing of hammers at the forges of war began to rise and mingle with the choruses of the priests intoning the hymns of peace.  Thenceforce the sons of El Passionario rushed into battle, bellowing their war cries of "Kill for Peace!"
and  "Death to the Warlike!" etc. 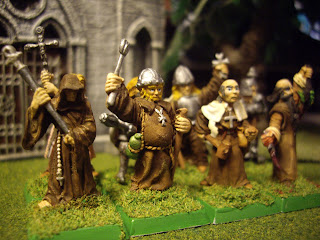 In the fourth year of the settlement of the Black River Country, a band of monks of the order of El Passionario crossed the border princes and came into the Black River country, asking the Baron von Refn for permission to establish a monastery there.  Though skeptical at first, the Baron eventually gave them leave to settle in his realm.  In the succeeding years, the Baron has become convinced of two things about the Monks of Saint Passionairo, as their monastery is called;

One:  They are all clearly insane and are bad company at parties.

Two: They are incredibly loyal and energetic supporters of his attempt to found a colony in the Black River country.  Their work with the poor and suffering folk in the Baron's realm has been of considerable assistance, as are the small but welcome contingents of fanatical fighters which the Monks often send to fight alongside the Baron's armies. 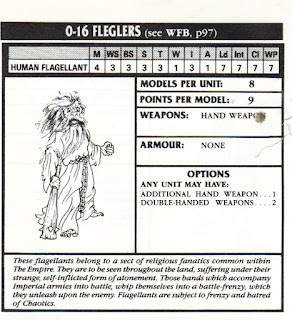