The Plain of Crows Part 2: The Armies

Well, I'm back and just recently recovered from a long and blistering work week. Here's the army that will be taking on King Asgard's Expeditionary force on the Plain of Crows very soon.  Despite the fact that the models I'll be using to represent Asgard's guys won't be painted,  I am only allowing myself to use painted models for my own army.  I want to keep myself motivated to keep painting and don't want to start letting myself think it's okay to use unpainted models in my battle reports. 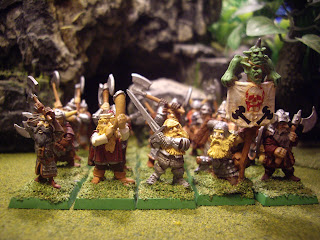 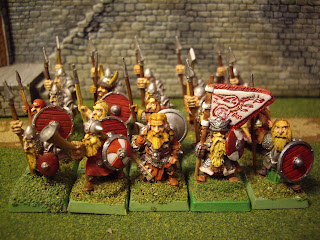 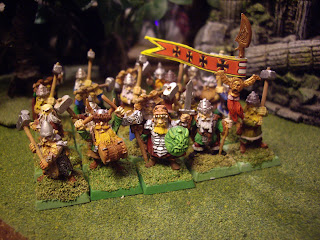 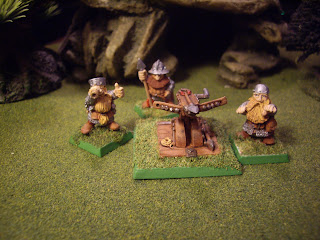 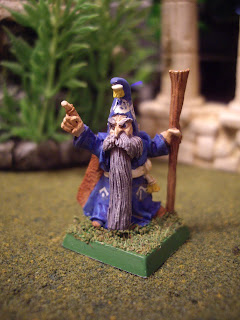 The switch from 1500 to 1400 points made some cruel decisions necessary.  Floi Haybeard had to give up his Frost Sword and the elite troops had to endure a downgrade to regular warriors.  Also I don't have an army standard, which I normally consider indispensable.
I'm worried about some other things missing from my army, too.  For my 2,000 point army, I intend to paint up some Giant Slayers and some crossbowmen and I have devilish plans for a pretty sweet battery of stone throwers.  If I had a wider selection of painted troops, my army might look quite a bit different, but it it is what it is.  Lord Maull's army might not be the army he wants, but it's the only army he's got... 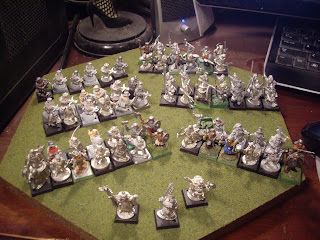 13 Warriors with shields and spears, Musician, Standard led by:

Really wish I could have done Lord Asgard's gallant crusaders better justice by representing them with figures that had...you know...paint and stuff, but I'm just not there yet.  This is what I've got.