Bearers of the Thunder 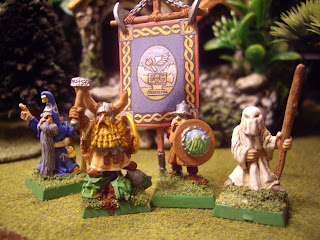 Shown here are four great heroes frequently seen at the fore-front of the Expeditionary Forces of the Thunder Mountain Dwarves.  In the center, and most conspicuous, (as he invariably prefers to be), is the King's General, Sveinn Donnerkind. 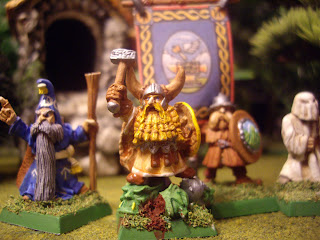 General Sveinn as he most prefers to be seen: from a vantage point somewhat lower than his own. 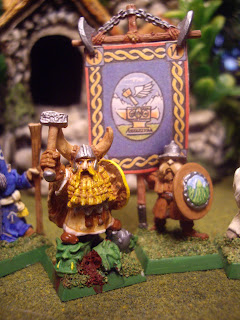 Sveinn Donnerkind left the Thunder Mountain colony while still a young Dwarf, intending never to return.  Although there are none in the Black River country more formidable than Sveinn in a fight, Sveinn is in fact quite short, even for a Dwarf. In his youth his affections for a certain maiden were rejected, supposedly for reasons related to his small stature, and it is said that he has never quite recovered emotionally from this bitter rebuff.  Sveinn briefly considered taking the path of the Slayers, but decided that this choice was a bit too likely to result in death, and so he vanished from the lands of his forefathers, spending the next few decades wandering throughout the Old World, even straying as far afield as Lustria, before finally turning his steps once more toward home.  Though regarded at first with a degree of amusement and suspicion by his countrymen, the prodigal son soon proved the worth of his considerable experience gained in the far corners of the world.  Within a hundred years or so, he had worked his way up to the position of Commander of the King's Expeditionary forces. Though fearsome in combat, honest in his dealings, shrewd in command and wholly dedicated to the cause of his people, Sveinn is also vain and highly sensitive about his height and of the way he is perceived by others.  He cultivates an extravagant beard of rich golden curls, braided and sometimes decorated with gems.  To compensate for his relatively diminutive height, he wears a preposterously large helmet crowned with a set of enormous bull's horns, and has a habit of standing on top of things, (tree stumps, ale kegs, dead enemies, etc,) so that he can look down on others from a dignified height. 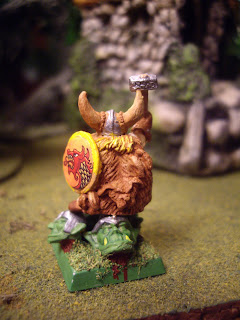 When going to war, Sveinn wears the hide of a slain chaos beastman, late of the Horde of Buzzgobb Phesterlick, over his shoulders.  This habit is the source of a degree of tension between General Sveinn and Lord Thorirr Maull, the Lord of the Upper Hall, who also wears the skin of a dead beastman and claims, with some justification, to have been the first to have done so.  The inference, of course, is that General Sveinn is copying Lord Thorirr's rather flamboyant personal style, a charge which the General denies with some heat. 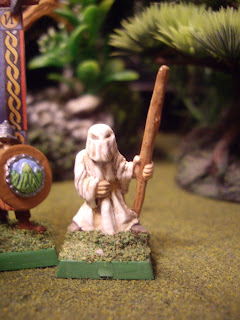 The strange Dwarf known to most as The Hermit on the Mount has a proper name but he never uses it and neither does anyone else. The Hermit lives in a small cave just beneath the crown of Thunder Mountain's highest peak, and rarely emerges from it unless he is called to battle by General Donnerkind.  Then, let the enemies of the Dwarves beware!  For the hermit is an elemental sorcerer of fearsome reputation, and is certain to be in a bad mood when brought to battle, for he does not like to be disturbed from his meditations and communions with the spirits of Earth, Air, Water and Fire.  It is said that Dwarves and even men can go to him for advice, or for the telling of fortunes, though his price is high, and usually takes the form of complicated and life-endangering favors, rather than of coin. 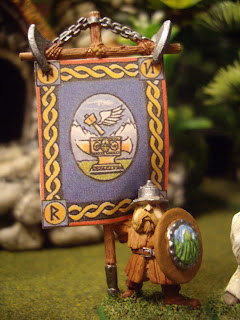 Hermann Hackemson was chosen by the King himself to bear the precious battle Standard of the Mountain Folk after Orcs, Goblins, Trolls, Chaos Warriors, and monsters of every description failed to kill him.  He seems to have been touched with a sort of unnatural luck which keeps him alive and intact long after everybody around him is dead.  Thus he makes an excellent army Standard Bearer. 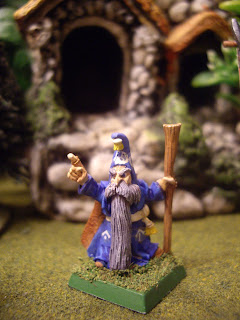 Hamm Hanson, more commonly known as Ol' Hamm, has been around for about as long as anybody can remember, and has fought in more battles against Orcs, Chaos Creatures and Undead than he, himself, can say.  He tends to be by turns gentle and kindly and sharp and irritable. He is currently locked in ferocious combat with the armies of the Dwarf King Lord Asgard.

They're not everything I'd hoped for, but I'm still glad I'm finished with this set of Command figures for my Dwarf Army.   One of the Problems I had with the Sveinn figure was that the casting had seen a lot of use, and a lot of his detail had been worn off or distorted, (if you look carefully at his nose, you can see it's a bit squashed, like he's been in one too many brawls...actually, I think he's just been tipped over on his face too many times...)so I kind of struggled with him...I might try to find a fresher casting and try again with him someday.  As for the standard bearer, I'd love to be one of you marvelously talented fellows who draws and paints your own banners and shield designs freehand, but I can't even draw a straight line, so I am making do here with a photo copy of what I think is an epic 40k Squat standard...At least the standard has mountains on it, and I was able to get a mountain motif on the standard bearer's shield...

Still and all, for now, it's pretty pleasing to know that my army is a big leap closer to being a real army now that I have my General, Army Standard and 2 wizards painted.  After this I have a battery of stone throwers, 20 crossbowmen and 10 Giant Slayers to go to get to my near-term goal of a 2,000 point force...slowly but surely, the Army' coming along!