4th Company of the Muster of the Great Hall 'Razorbacks' 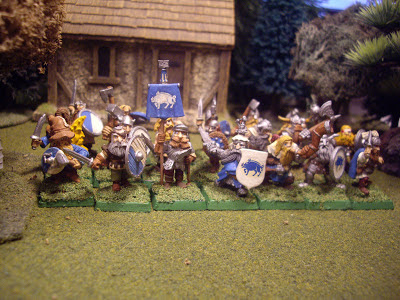 "...we entered into the hall and found that a great feast had been laid out on a series of long wooden tables all filled with folk.  I had, of course, desired to be seated at the King's table, but was disappointed in this hope, being seated instead near the head of a board one table down from his Majesty.  Later, I would be glad that it had been so.  At the head of this table was seated a stout and venerable-looking dwarf, his broad chest and bulging, oaken-thewed arms wrapped in rich blue silks, his bull neck hung about with many thick golden chains of marvelous workmanship.  This, I soon learned, was Haakon Stahl, a very important personage 'on the mountain', as they say, the Master Smith of the Great Hall, close friend of the King, and Captain of the warrior brotherhood known as the 'Razorbacks', renowned for their stubborness in defensive fighting. 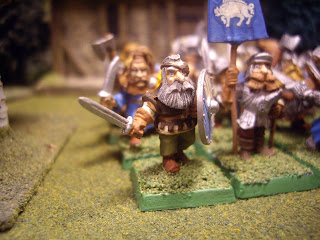 Haakon was polite but reserved at first, as is the way of all the Mountain folk, but as the evening wore on, food vanished from the table, and mug upon mug of rich brown beer disappeared into his smooth grey beard, he became friendly and talkative indeed, much to my own delight.  The evening deepened and folk drew away from the tables, gathering round the great fireplaces to sing and hear stories, but Haakon and I lingered together over many more mugs of beer, talking with much enjoyment of our respective crafts, and I am proud to say that by the night's end we had become friends, though I confess I had some trouble rising gracefully from that table of good cheer. 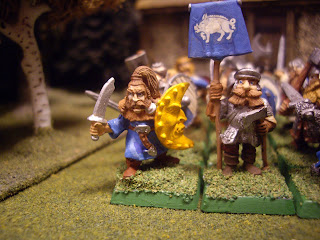 On subsequent trips to Thunder Mountain, I have been a guest in Haakon's hall, and have seen many of the wonders he has produced in his marvelous smithy...shields that shine bright as the sun, blades that can cut through stone, and snowy-white Mithril armor which can turn aside the cruelest blow.  Most recently I accompanied the 'Razorbacks' on a campaign against the Goblins of that region we call the North-Western Spurs,  and stood with them in the battle, laying low what I daresay was a respectable number of the Green-skins with fire spells, and, I hope, being more of a boon than a hindrance.  The Dwarves were too proud to be very effusive in the giving of thanks, but I hope I was of some assistance to my friend and his gallant battle-brothers..." 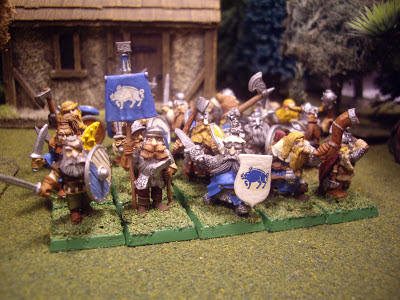 ***
My latest regiment of Dwarf warriors, which brings me up to the 40 required by the Warhammer armies book, and which also carries me to within striking distance of completing my 2,000 pt Dwarf army...just the required 20 crossbow Dwarfs, ten of which are already nearly finished, and I'm there! 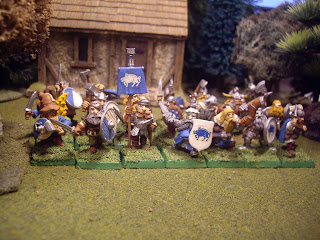 Haakon Stahl leads his brothers into the fight... 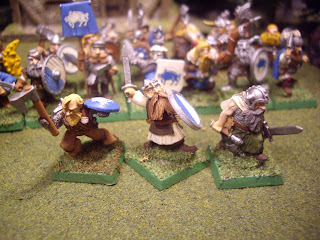 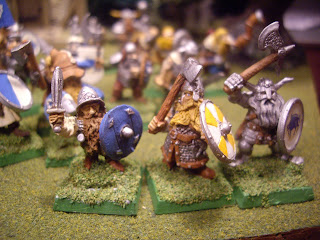 Some of the individual warriors...

This is probably the most varied unit, in terms of manufacturers, I've assembled yet, and I really liked mixing it up...There are 3 Grenaider, 4 Citadel, 2 Ral Partha, 1 Black Tree, 4 Metal Magic, 2 Alternative Armies, 3 Old Glory and 1 Rafm figure in the bunch. 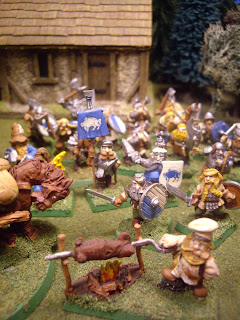 The Razorbacks' normally steely discipline collapses along with their formation as Ol' Cookie calls the boys to chow! 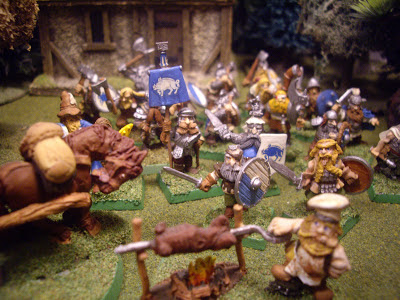