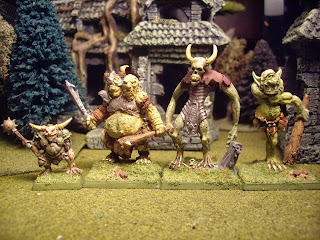 Diggle was a little man of no account.  Small, ugly and a simpleton.  He had one talent, though.  He could talk to the bears.  Day and night, Summer, Winter, Spring, the little carnival bumped and creaked along the forest paths of Kislev and the Empire, moving slowly from village to Hamlet, always avoiding the great cities.  Some of the Carnival Folk complained to Shivv that they could make more money in the great towns, but Shivv kept them on the narrow forest tracks, always working the little communities where most folk never went more than twenty miles from their homes in their whole lives, and where the carnival people need fear no pursuit when a woman or a child went missing. 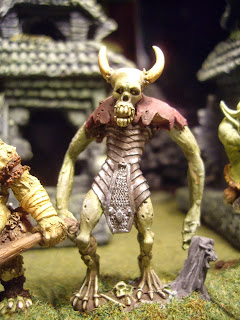 Diggle didn't talk to the others, much.  He had his bears.  The great beasts walked and rolled and tumbled and danced at his command, to the delight of  his audience.  At night he slept between their great furred flanks, needing no blanket, not even in the bitter cold.  They were his great, black-furred children, and while he had them, he had no need for the company of men.  One night when the little carnival had strayed south into warmer and unfamiliar lands, strange men came into their camp.  The men wore tall hats and long cloaks and their hard eyes caught and held the campfire light in a manner that made Diggle afraid. They poked amoung the wagons and asked Shivv many questions.  Then they left.  After that Shivv would have no more of those climes.  He led them east, into remoter lands, nearer the borders of the realms of men, where he hoped the people would be less clever in reading certain signs that were beginning to make themselves more apparent on the flesh of himself and his followers. 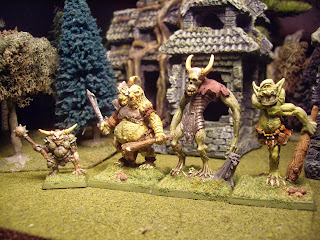 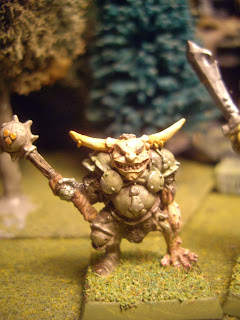 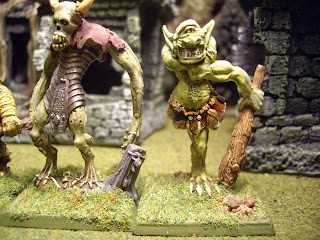 They crossed many rivers and passed through many lands, but the people here were tough and wary of strangers, and the carnival found little welcome.  Women were chaste and not easily baited.  Men never walked alone, but always in little clusters.  Mothers watched their children like hawks.  There were no easy pickings amoung these frontier people.  Shivv had brought them to the very edge of the known world, in a strange, narrow country on the banks of a wide, dark river, when he decided to turn north again, and back to more familiar climes.  But then they began to get sick. 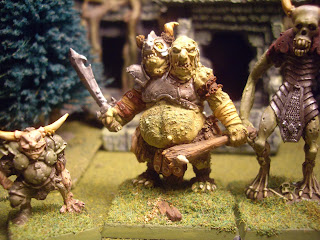 They had always been a somewhat sickly bunch, but this weird new malady laid hold of their bodies with a ruthless, withering gripe.  Beast and man sickened, and Diggle lay amoung his beloved charges, shivering and weeping to hear them moaning in their pain. Ecclavia said it was because they had given no sacrifices to the Master, that he was angry with them for ignoring him and that he had unleashed his terrible judgement like a fire within their flesh.  But there was little they could do.  When the people had seen the carnival folk begin to sicken they had driven them from them.  The little clutch of brightly painted wagons lay far out in a meadow, watched from a distance by mailed horsemen who carried tall spears.
On the last night Ecclavia was caught trying to steal a babe from the village to give to the Master.  It had been a desperate gamble, and it had failed.  The women of the town belabored Ecclavia with stones and Axe handles, and put flame to her flesh while she yet breathed.  Shivv and a few others who were still hale enough to move tried to make off north, following the river, but the horsemen espied them, pursued them, speared them and cast their bodies into the dark waters.  Then they went amoung the wagons, where they killed and burned everything they could find. 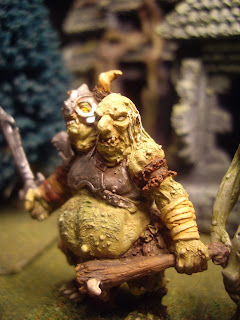 Diggle crawled off into the darkness, weeping, moaning, biting his flesh in his grief.  Behind him he heard his children, moaning and roaring in anger and confusion and pain as they died.  How he escaped the watchful eyes of the horsemen and the priests, he never knew.  Nor did it seem possible to him that he could have crossed the great river, for he knew not how to swim, but cross it he did, somehow:  some great power led him on.  The land east of the river was a great desert of sharp stones and tall dry grass.  He was thirsty and starving, and the fever burned in his flesh, melting him and changing him, but he hobbled on, searching for the Master, whom he knew was somewhere not far away.  Sometimes he thought he could see the Master in the clouds, a great, bloated, Kingly mass,a horned and eyeless head that seemed to stoop and study him in bemused mirth.  Later, he remembered long conversations with the Master in these moments.  He spoke of his pets, and of his grief at their loss.  He spoke of the greatness of the Master, and of  how he would serve, if only he could.

He came at last to a pool, a black welter amoung the sharp stones, and here the great beasts found him.  They were huge and tall and strong, like his children.  Much mightier than he.  He waited for them to rend and devour him, but they sat down around him in a crescent and studied him, as if waiting for him to tell them what to do.  At last he rose and went to the pool to drink, and there he saw his reflection, and now he knew why the great beasts seemed to wait upon his word.  He had changed.  The fever had melted part of him like candlewax, but the other half of him had grown massive and strong.  His face had formed into a parody of his former self, crowned with a pair of mighty horns, split with a wild grin that reminded him of old Otho, the Carnival clown.  His suppurating flesh was enclosed in splendid steel armor and in his one good hand he carried a mighty staff shod in iron that throbbed with the sacred Word of the Master.  He turned and looked at the great misshapen things hunkered by the pool, watching him in fascination, and he knew the Master had sent them to him.  He knew the Master loved him. 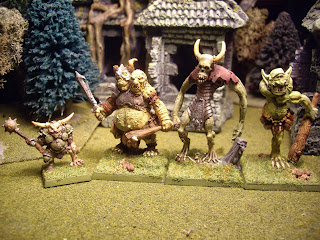 Digglechun Smegmarr is a Champion in the Chaos horde of Buzzgobb Phesterlick.  He Always goes into battle leading his 3 beloved "Children, " his mutant Chaos Trolls.  Mutant troll models are hard to find in Citadel lines, but I liked all three of these models a lot, and used them.  The 2-headed fellow is a Reaper model, the horned, skull-faced one is by RAFM, and the 1-of-everything troll is by Alternative Armies, part of their great ERIN line.  It's been months since I added anything to Buzzgobb's horde, (shame on me) but I'm painting furiously, trying to get to 3,000 points before the end of the year.  The painting table/pile has an Army Commander and Standard bearer and a beastmen regiment standing on it, partly finished.