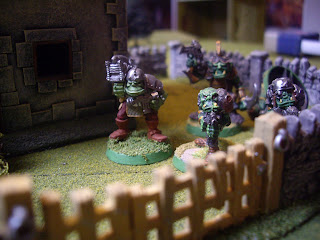 Round the back of the farmhouse, Neel was still looking for his squad.  "Guys?  Guys?  There's some really heavy things going on, now quit hiding!"  He lifted a largish stone out of the mud and peered underneath.  "Guys?"  Some small furred animals were revealed in the sodden earth where the stone had lain.  Squeaking angrily at him, they retreated from the rain and light, disappearing through a chink in the farmhouse wall.  Neel started and quickly replaced the stone, feeling guilty.  "Sorry."  he mumbled.  There was an awful lot of noise round the front of the farmhouse.  He heard shots and explosions and Orks yelling angrily.  This was a hell of a time for everyone to disappear on him...Suddenly something strange happened in his head.  Two ideas came together abruptly, and with startling implications!  Could it be that maybe his boys were up where the sounds of the fighting were?


Wow! Neel leapt the back wall and ran round to the front just in time to see one of his boys go down under a flash of laser fire.  The others were cackling and blazing away at the pirates who were trying to make their way past the farmhouse. Piles of hot brass fell hissing and steaming into the mud, and Neel saw one of the Pirates go down as his missile launcher boy hefted his weapon onto his shoulder and took aim at a particularly large and heavily armored pirate.   Said pirate was standing triumphantly over Vivyun, who was rather disgustedly sitting on his own head, which had recently been separated from the other parts of him.  All of Viv's boys were down, but it looked like they had taken a toll on the Pirates before they'd given up the ghost.  Over by the barn a huge troll-like figure and another pirate had vaulted over (or rather through) the barn fence, and were wading into Rikk's boys... 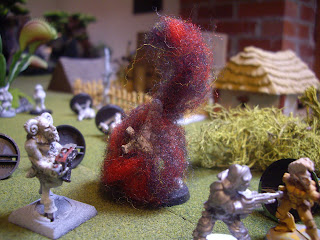 Neel passes his stupidity test and runs 7" around to the front of the farmhouse. His two bolter boys blaze away, cutting down one of the pirates standing near To Captain Ulysses.  The Ork with the missile launcher waffles for a few precious seconds over which sort of missile he wants to load.  He finally decides to go for the gold and loads up a melta missile.  He aims carefully for the bridge of Captain Ulysses' nose and fires.  He rolls a two for distance and a hit on the artillery dice, which is about as good as it gets.  He rolls a 4 to wound, and a 4 to damage.  Captain Ulysses disappears in a flash and swirl of fire and smoke.  Is it possible that he can have survived? 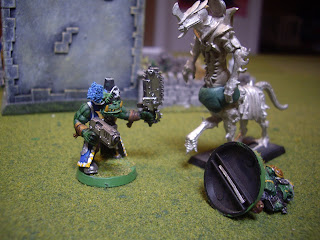 ***
On the other side of the farmhouse, Warboss Mykhul was flailing away at Bert the Zoat with his chainsword.  He landed several hits, but they all bounced off the tough creature's thick skull.  Bert also slammed Mykhul about the head and shoulders several times, but the Ork's skull was also impressively obdurate.  The two great shapes, slightly blurred by the rain, stood hitting each other on the head, with nothing really coming of it, like figures in a Goya painting.


Over where Vivyun's squad was, nothing happened because everyone was dead. Viv sat disgusted in the midst of his annihilated squad, brooding on the failures of his leadership, and using his head as his new stool.

Over by the barn, Rikk saw Tiny's huge form crash through the barnyard fence and bear down on his squad. Storming into close combat without breaking stride, the Ogryn brought his enormous fist down on one of Rikk's boys, crumpling the hapless Ork up like a fungus beer can.  Yelling incoherently but enthusiastically, Rikk's boys plunged into the fight.  "I'll see you later, Lads!"  Rikk yelled, trying to exit: stage anywhere.

Rikk paused in mid-flight, put his hands on his hips and wagged his pointy head at them, sneering and rolling his eyes to show them what he thought of their ignorance. "Oh, don't be so stupid, comrades!"  he chided them all, "Think, now, will you?  I'm the head of our Orky secretariat!  The intellectual engine behind our great revolutionary movement!  I can't possibly be expected to stay here and die with you miserable proles!  I'm simply too valuable!  I-" 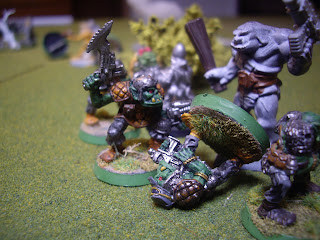 It was the last thing he ever said. Abruptly, Tiny's gigantic form loomed up behind him, scooped him up, folded him into a small, compact bundle and discarded him in the mud.  That was the end of Rikk.  Until later...