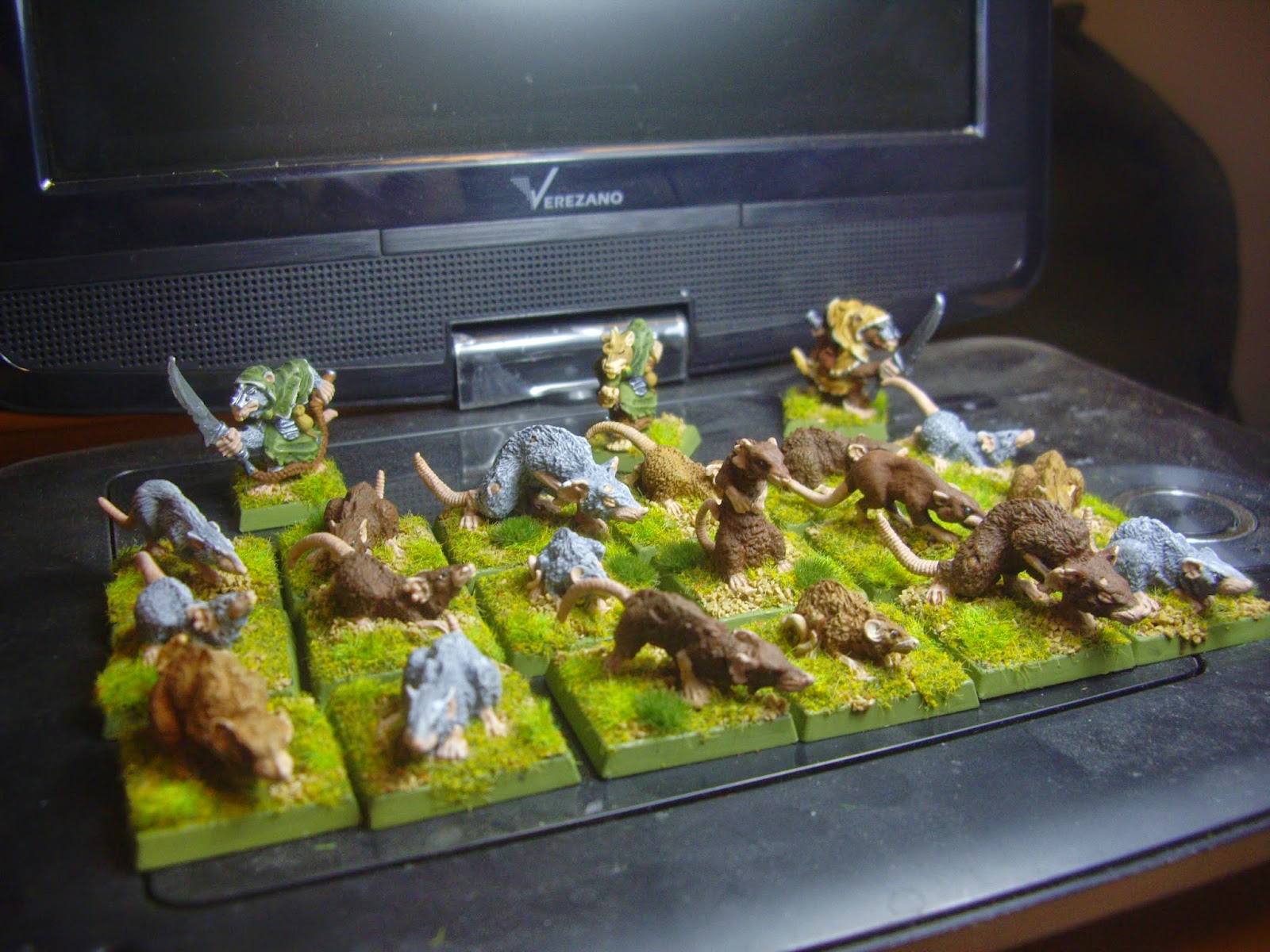 A rustling of small, furred bodies, a chorus of tiny voices raised in rusty-hinge screeching, a whisper-like scrabble of innumerable talons rasping upon stone and...the giant rat pack bursts out of the dark. Pouring out of the cave-mouths of the Fleafell like a flood of black bile, a rolling, ravening carpet of mange and louse!  Loping at the rear, robed figures crack long whips, driving their vile charges to ever greater exertions.  "Run-Run! they squeal. Into the fray...Run-Run!" 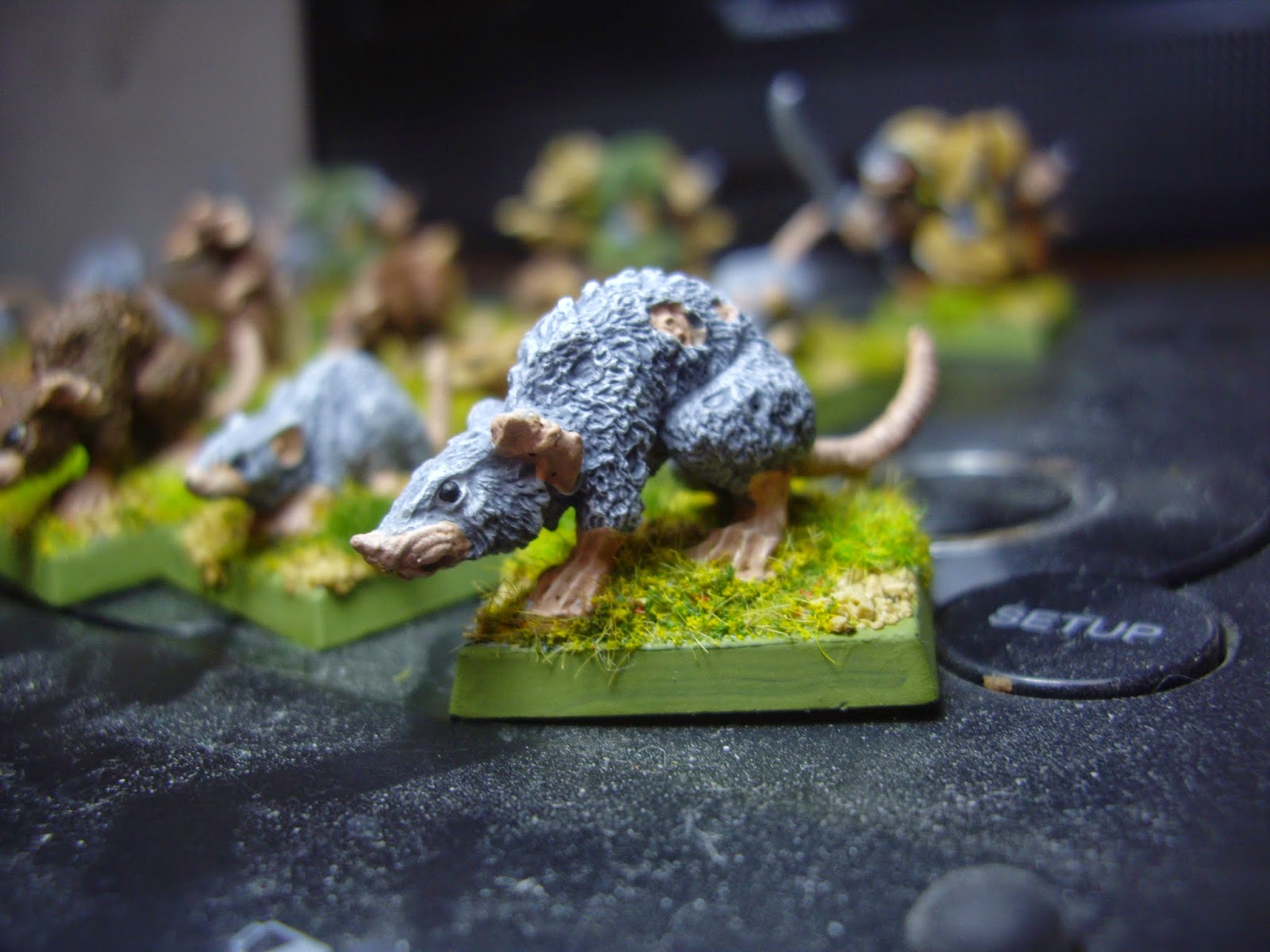 My second Skaven Regiment and also my Second Clan Moulder Unit...Only 3 Clan Moulder  packmasters left out of the maximum allowed in Warhammer Armies. 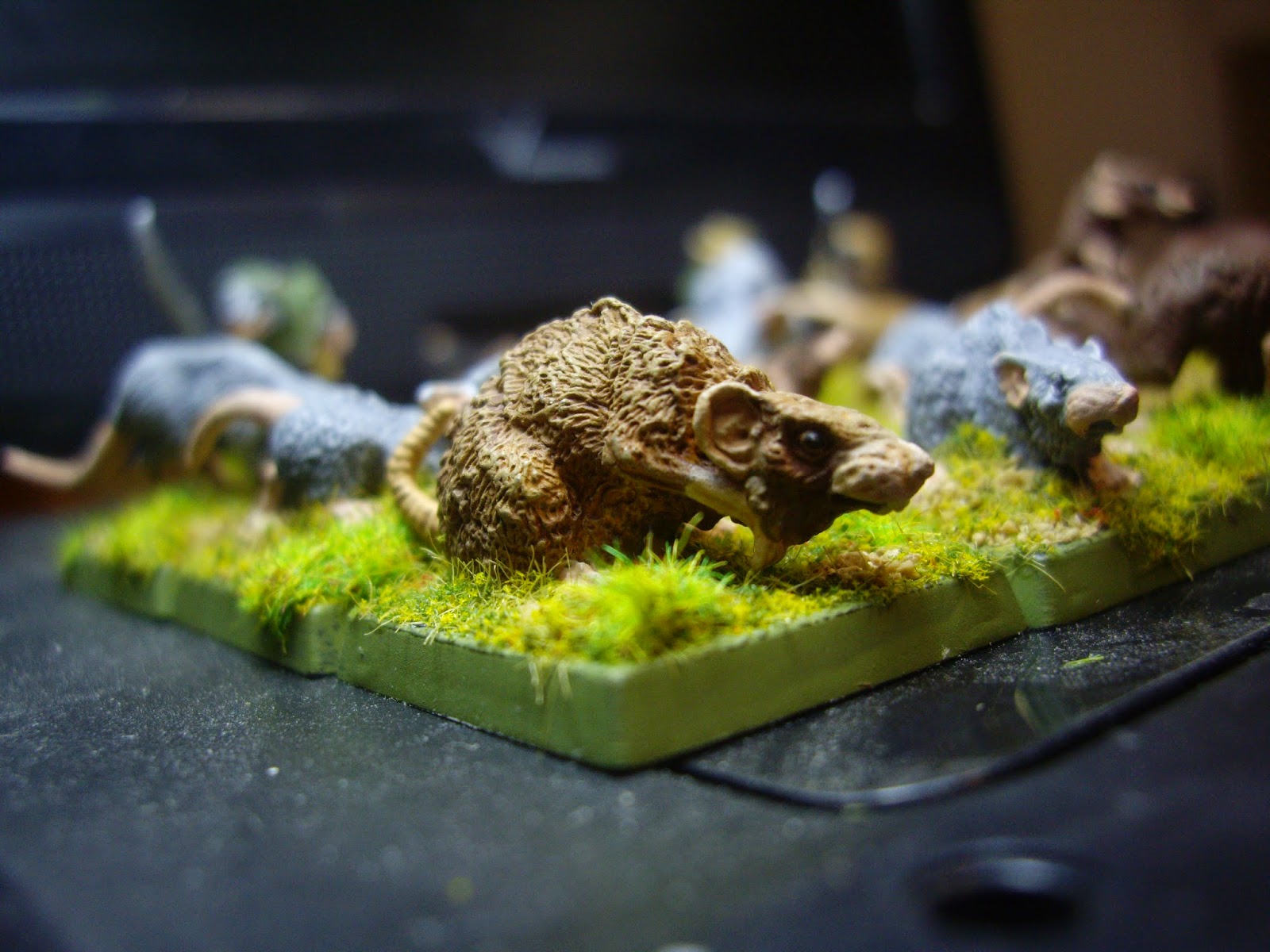 The rats were a lot more fun to paint than I thought they would be.  Got lucky with the eyes on this plump fellow here... 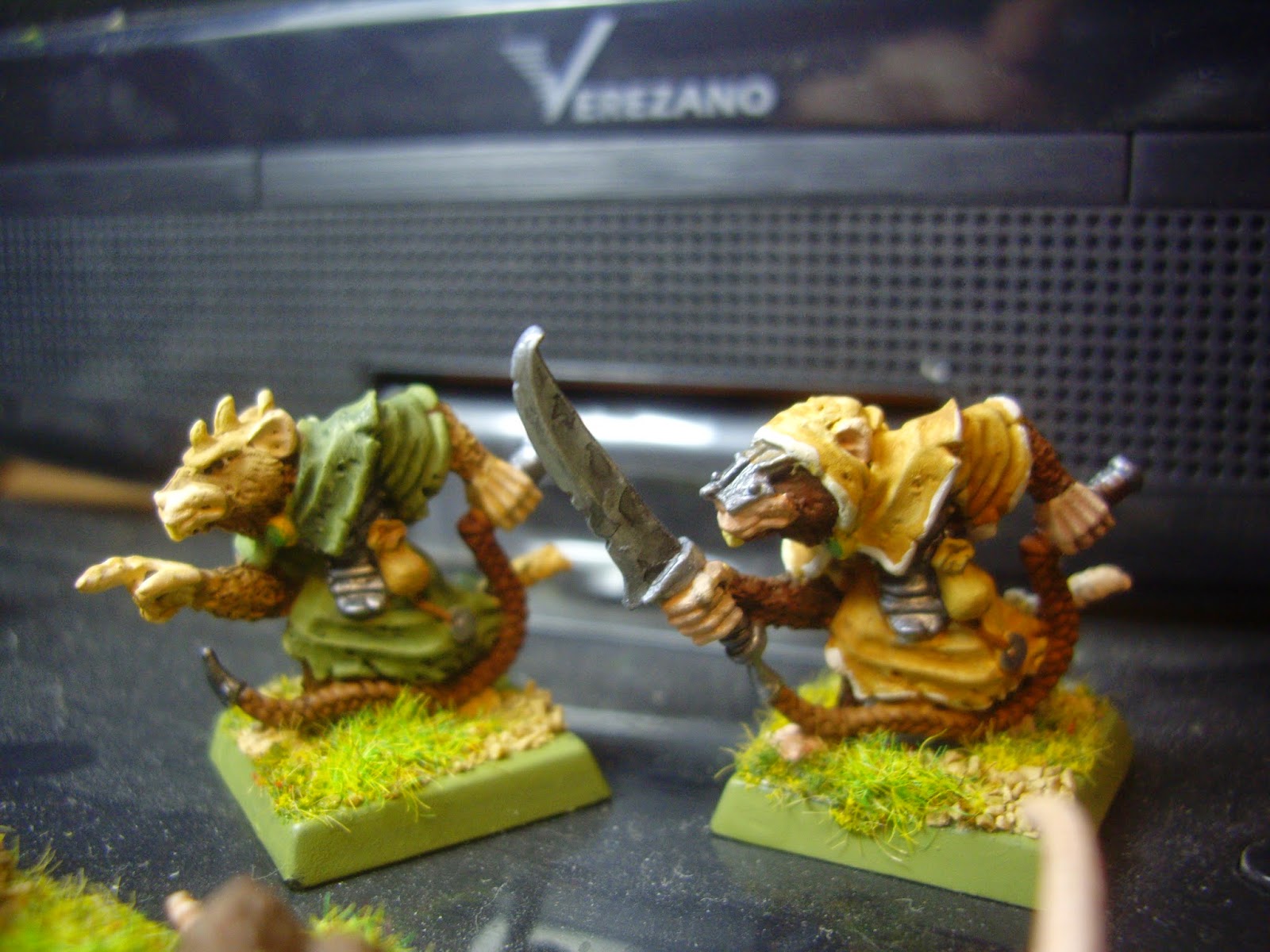 I'm not super happy with the handlers - haven't quite worked out a technique for painting Joe-average Skaven types.  If I could change anything about this unit, I think I'd give the handlers some kind of a uniform.  I think Andy Chabers had the right idea when he gave all his Clan Moulder Skaven white cloaks with red cult markings.  I don't know why, but that just looks really good.  Maybe I'll steal that idea for my plague monks or something. 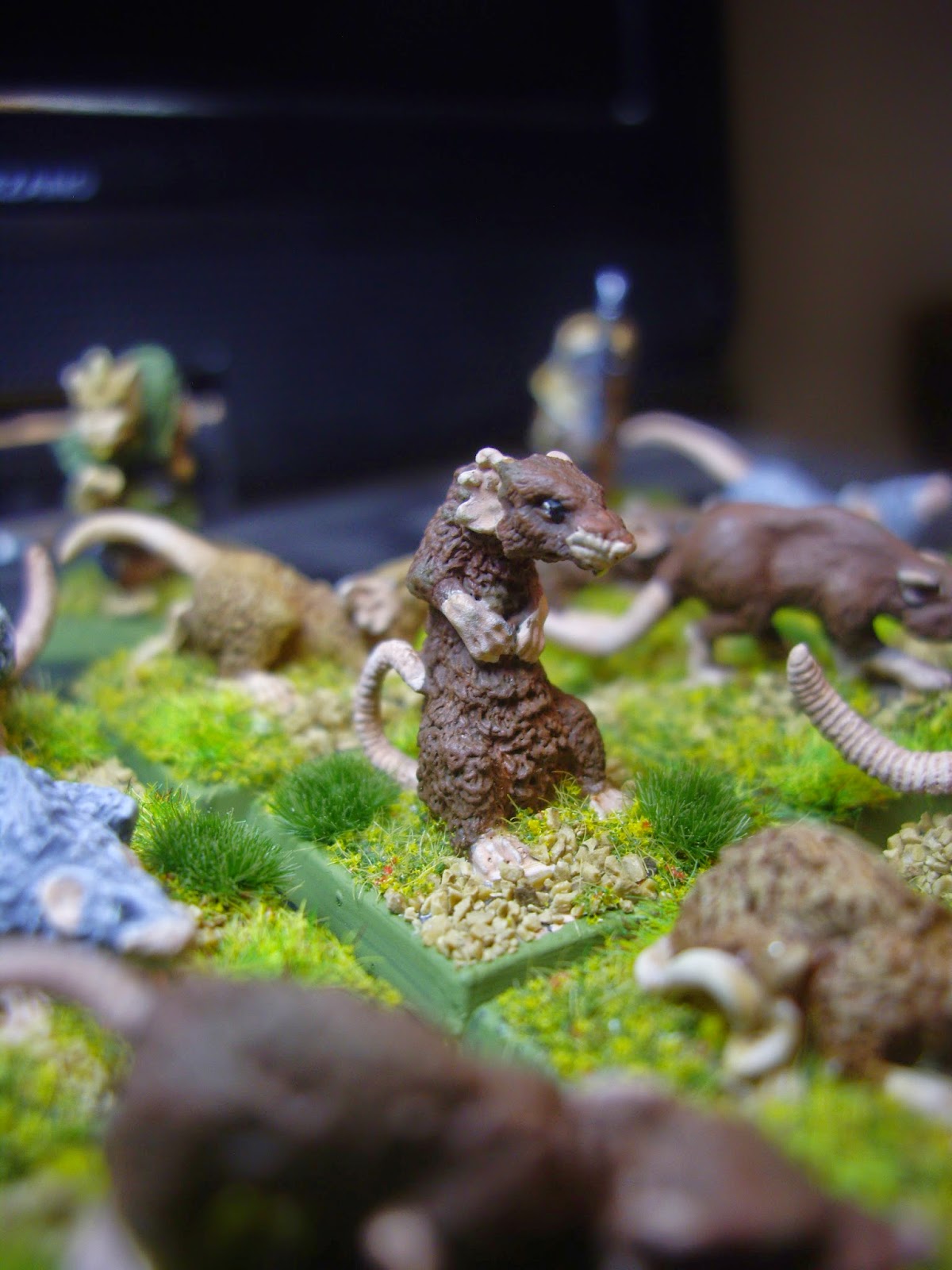 5 figures in the unit are from a pack of TSR AD&D giant rats made I think by Grenadier around 1983.  This standing fellow and the fat yellow rat above are from this pack.  I think they have tons of character, are the perfect proportions, and fit in great with the GW rats.  The # of poses in the Citadel giant rat line was a little limited and these guys really help mix it up and add some variety. 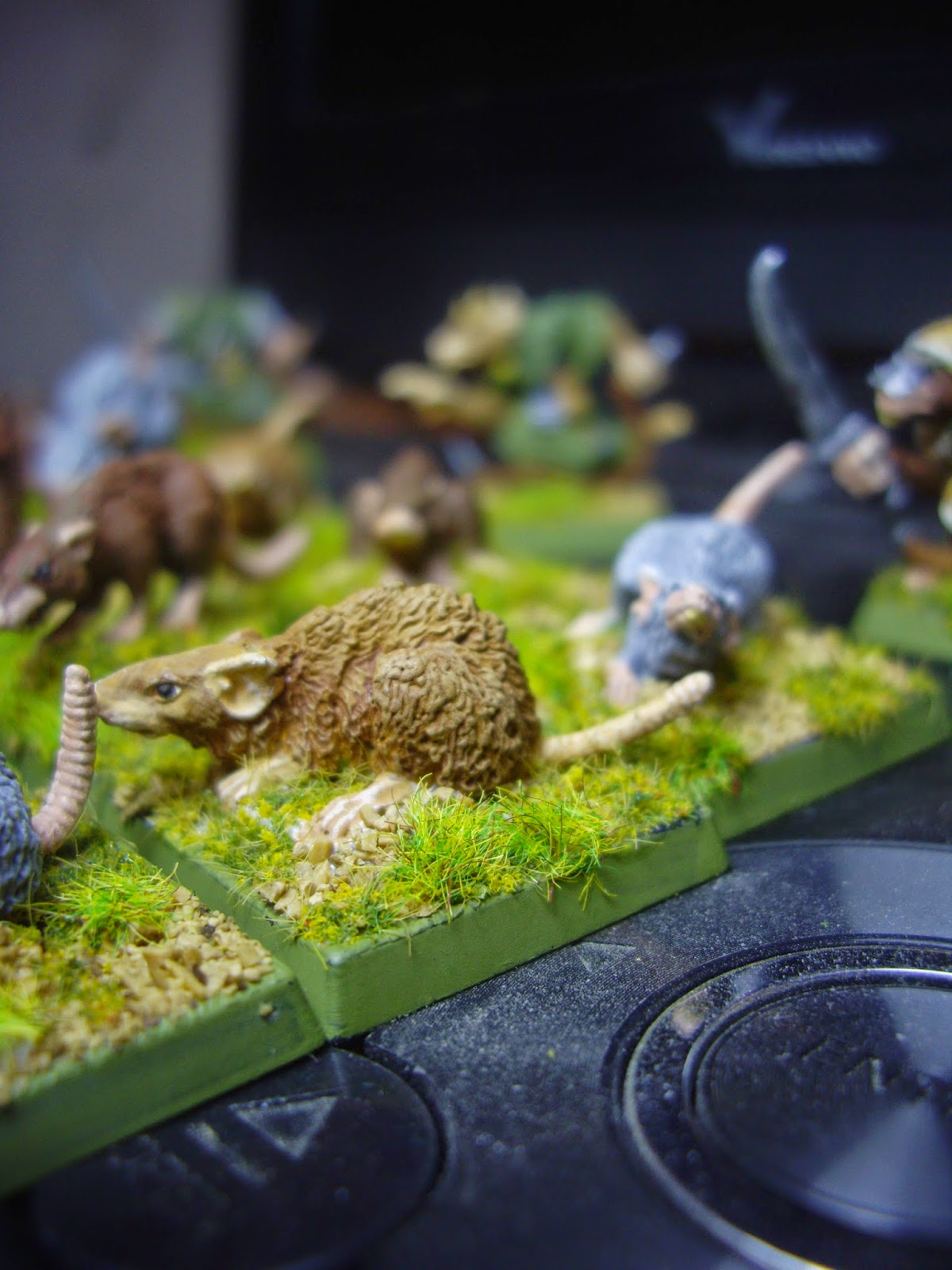 I enjoyed painting the rats a lot more than I thought I would, and I'd like to have more of them in the army.  On the 25mm bases and at a paltry 2 points apiece, they can really bulk the army out.  Plus, they look cool.  The down side with these guys is that adding them only makes your army grow very slowly in terms of points.  Even after I gave the pack handlers light armor, the whole unit-21 models-only adds up to 67.5 points! 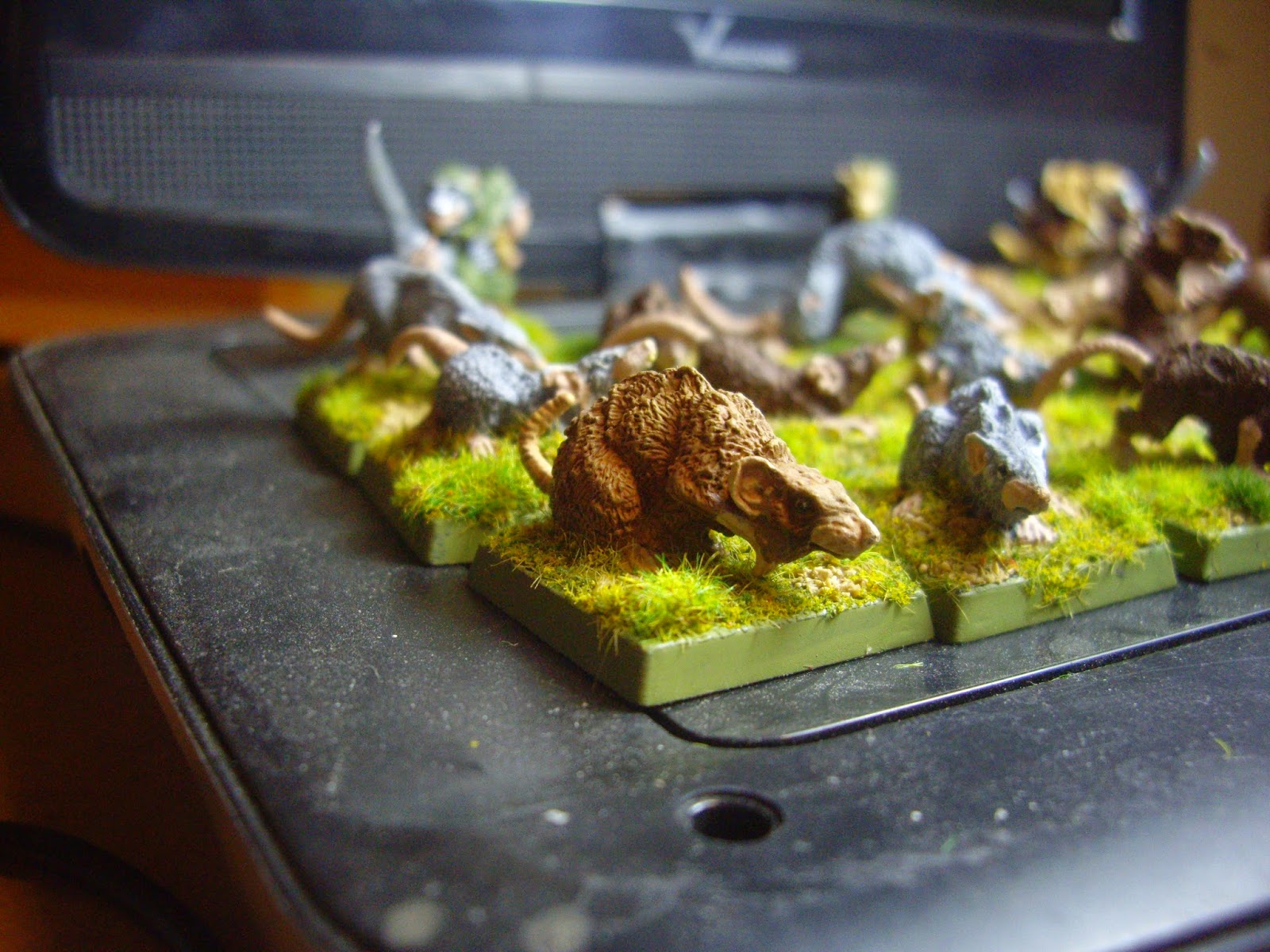 Couldn't resist throwing in another shot of my favorite rat. Such a cranky expression! I have a feeling that he's going to be one of those 'lucky' fellows that always comes off last when its time to remove casualties. 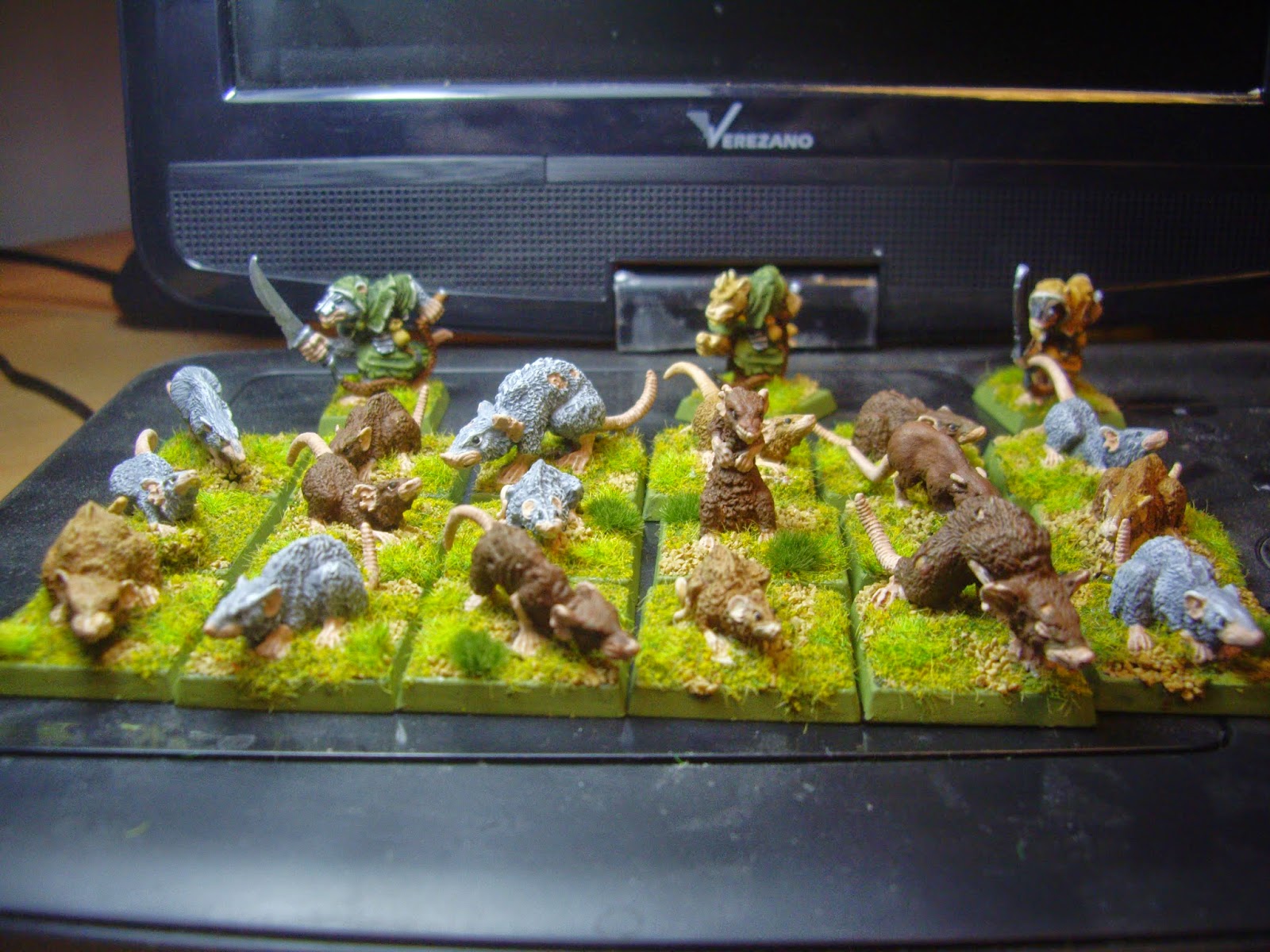 "Attack-Attack!"  The Rat-Handlers shoo their charges forward across my DVD player.  It'll be nice when I can get back home and photograph my fresh-painted minis on the big board again...